Accessibility links
The Life And Work Of Pierre Henry, Ceaseless Sonic Explorer : The Record Henry broke from his classical training to become of the foremost innovators of experimental composition in the 20th century. 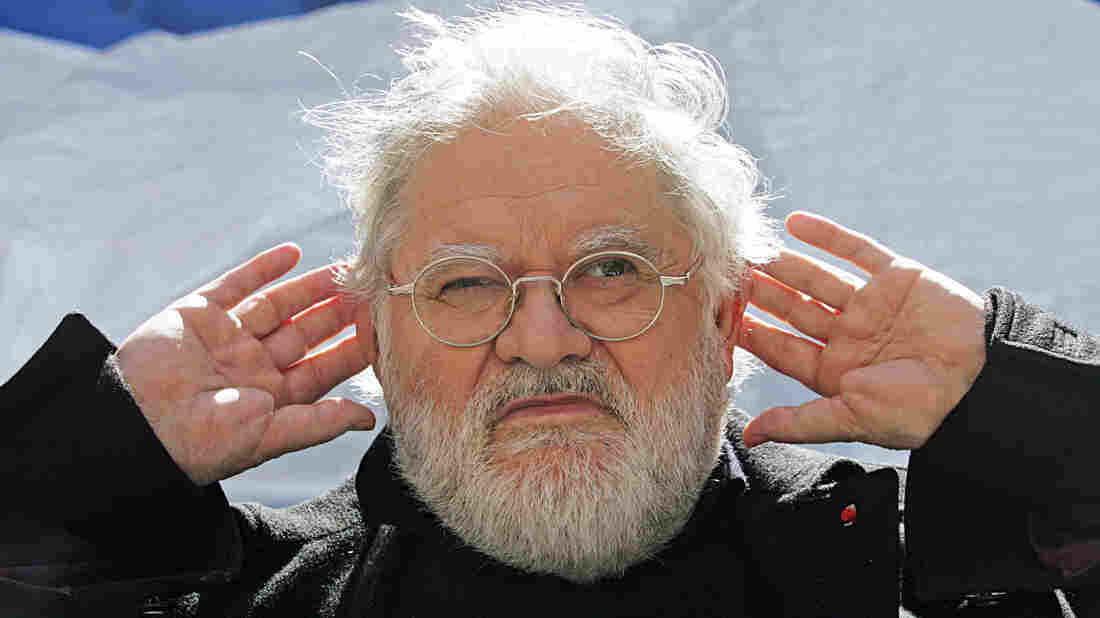 Pierre Henry in 2007, at the Saint-Joseph school in southern France. The musique concrète innovator died this week at the age of 89. Boris Horvat/AFP/Getty Images hide caption 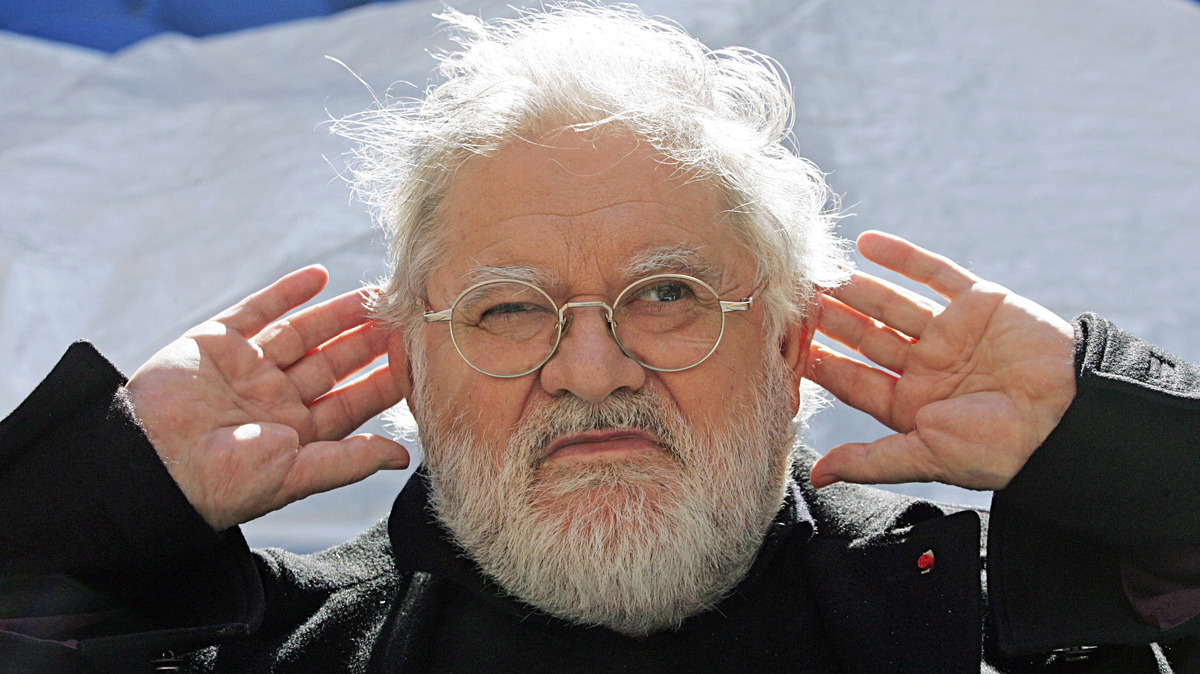 Pierre Henry in 2007, at the Saint-Joseph school in southern France. The musique concrète innovator died this week at the age of 89.

Pierre Henry, a true giant of 20th-century musical exploration, died this week at the age of 89, as reported by Le Monde. The composer began exploring the nascent possibilities of electronic sound in the 1940s.

Beginning in 1949, Henry was vital to the development of musique concrète, a groundbreaking form of music devised in France by Pierre Schaeffer just one year prior, in 1948. Think of musique concrète as an early form of sampling, using sounds collected from anywhere, from the sound of a bell to a passing train. "The technique of sampling is at the heart of musique concrète," Henry explained to The Wire in 1997. "We invented an alphabet, and today it has become a language." The language Schaeffer and Henry developed is still spoken in the pop music we hear every day.

Back then, synthesizers and samplers as we know them didn't exist, but there were a few ways to make electronic sounds, using homemade circuits, tone generators or various contraptions. The best-known of these electronic forebears is the theremin, invented in 1919. Tinkerers soon realized that they could "hack" devices that already existed — turntables, radios, reel-to-reel tape machines — to make some of the first electronic music. One could slow down and speed up a tape, loop it, play it backwards or cut it up, leading to worlds of new possibilities.

Musique concrète is known as tape music, but in the early days it was turntable music, too. Messing around with turntables was easier than tape machines, which at the time were finicky and expensive. Henry quickly became "a sort of turntable genius," as Schaeffer observed in his diary, translated to English in the book In Search Of A Concrete Music. Henry soon became adept at working with tape machines too, chopping and splicing with skill. Even after synthesizers became widely available, Schaeffer preferred to use his old tools instead of the new ones.

"Musique concrète is about the art of decision," Henry said in the indispensable documentary The Art Of Sounds. "It's the art of choice. You select one sound over another, and that's where composing begins." In the hands of artists like Henry, musique concrète became something exquisite and sophisticated. A key to musique concrète's allure and mystery was that one could "manipulate" the sounds by using various treatments to transform them.

Henry was an incredibly prolific composer over the course of his life, even converting his Paris home into a living musical instrument of sorts — a quirky venue and sound installation, packed with collages and antique machines. And Henry didn't just toil on experimental music in the studio; he was on the pop charts, too. You can still hear traces of Henry on TV; Futurama's theme song is inspired by Henry's groovy "Psyche-Rock," made with Michel Colombier, from 1967.

Henry was classically trained, studying at the famous Conservatoire in Paris under Olivier Messiaen and Nadia Boulanger. At the time, Schaeffer predicted that Henry would soon quit the challenges of musique concrète. "All of the musicians whom until then we had invited to join us had practically run away from a musical undertaking bristling with difficulties and defended by the barbed wire of technique," Schaeffer wrote in his diary. But Henry refused to back down, wrestling with the machines until they did what he wanted them to. "Pierre Henry had abandoned his kettledrums and was giving all his time to the studio," Schaeffer marveled. "Within a few months he had acquired skills in manipulation that amazed even sound engineers."

Just as importantly, Henry's wife, Michèle Henry, was the unsung heroine of the early days of musique concrète. She capably managed the immense task of cataloging and organizing the thousands and thousands of "sound objects," or samples, that Schaeffer, Henry and others were creating.

Where Schaeffer was cool and cerebral, a theoretician with a background in radio engineering, Henry was wild, a musician prone to impulse and occasional flights of fancy. Henry was trained in percussion and piano, and wanted to make songs at a fast clip. Schaeffer, meanwhile, sought to develop a lofty philosophy of sound.

Both were geniuses, and both were stubborn. Without that push-pull dynamic, without the tension between them, musique concrète as we know it would not exist. Henry helped take that music out of the laboratory and into the world. He wasn't afraid of commercial success, or of pop music. "For Schaeffer, musique concrète was like a musical philosophy ... for me, I immediately wanted to create works, and what's more, profitable ones," recalled Henry in The Art Of Sounds.

Henry and Schaeffer collaborated in 1950 on the strange and beautiful Symphonie pour un homme seul ("Symphony For A Lonely Man," or "Symphony For A Man Alone"). In 1951, Schaeffer, Henry and the engineer Jacques Poullin were the three forces behind a center called the Groupe de Recherches du Musique Concrète (GRMC). Schaeffer and Henry worked tightly together before acrimoniously parting ways in 1958 (and then befriending each other again, decades later). "As time passed Schaeffer reproached me with spending too much time on practical applications and not enough on research," Henry said in 1997, encapsulating the personality divide between them. "But I was more interested in opening up musique concrète to wider audiences. We quarreled a great deal and he ended up firing me. But it wasn't such a bad thing because I founded my own studio."

In 1958, the famous GRM (Groupe de Recherches Musicales), which exists in France to this day, was established. Henry set up his own studio, which he called Studio Apsome, in his house. In 1963, he created one of his enduring masterpieces — Variations pour une porte et un soupir ("Variations For A Door And A Sigh"), inspired by sampling the squeaky sounds on a door in an old French farmhouse. In addition to squeaky door sounds, there was also an actual sigh, and plenty of farm noises, too. "Occasional offstage noises intrude: Henry blocked the stream to heighten the sound of rushing water, starved the pigs to make them squeal, rampaged after clucking chickens, recording all the while," wrote the critic Art Lange in his memorable primer on musique concrète in The Wire.

Decades of memorable compositions by Henry followed, including sonic explorations inspired by the Tibetan Book Of The Dead, a stint on the pop charts in the late 1960s for "Psyche-Rock," cortical brain experiments and a collaboration with the British rock band Spooky Tooth. Henry released album after album, each different from the previous one, and kept on creating and collecting exciting new sounds until he died. Through it all, his childlike wonder never left him — he always remained fascinated by new sonic possibilities.

"I think nature was my first influence, and the sounds I heard during my childhood," said Henry in The Art Of Sounds. "I listened to them a lot, and they remained a part of my inner landscape ... The passion I had from the first to add sound effects to my instruments, to find analogies to what I was doing at home and what I could hear outside.

"My childhood certainly proved to be the best beginning an innovative musician could have."