Accessibility links
MTV Plots A Comeback As The VMAs Bring A Moment Of Relevance : The Record Previewing the 2017 Video Music Awards — which remain MTV's biggest event of the year — and other ways the network hopes to lead the cultural conversation. 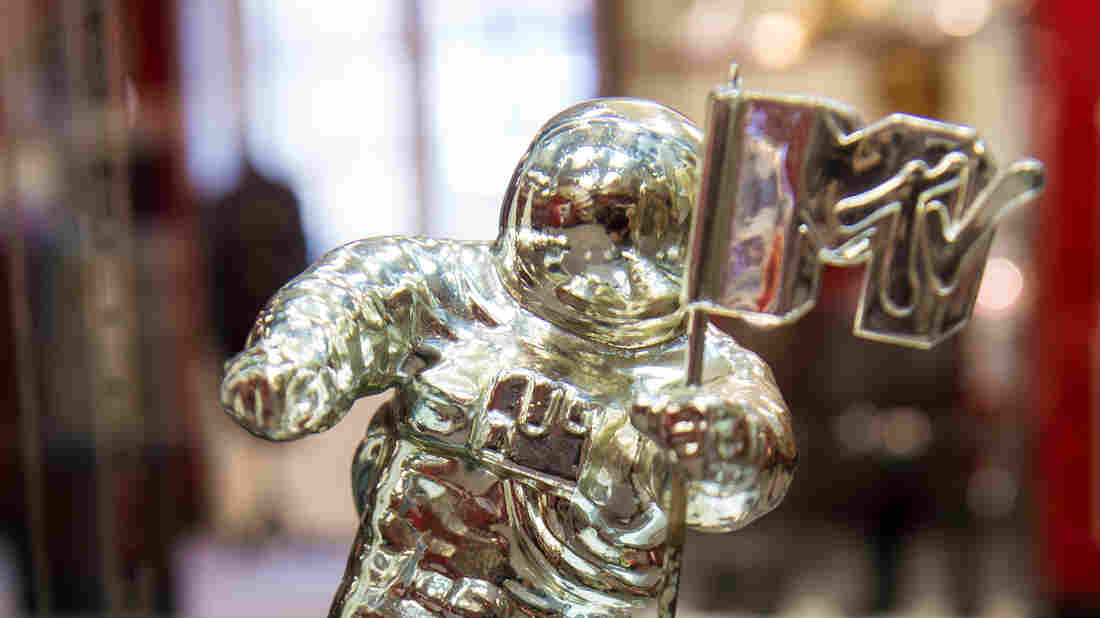 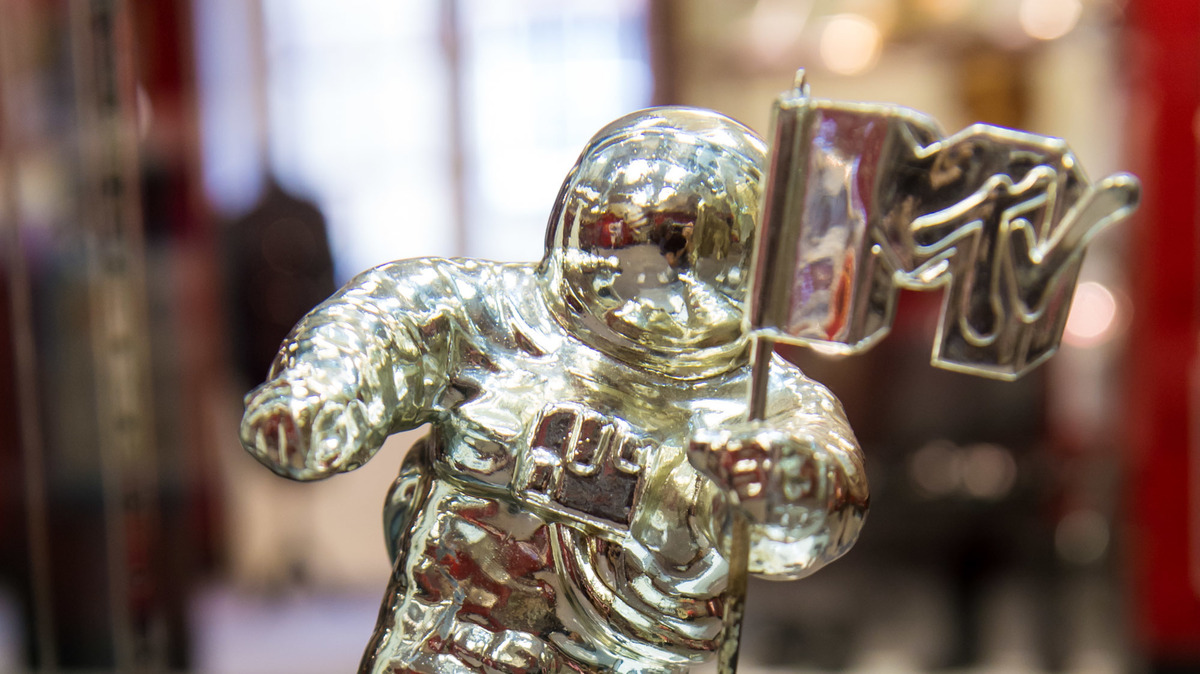 The MTV Video Music Award — renamed this year from the "moon man" to the "moon person."

Let's get one issue out of the way up front: MTV is never again going to build its programming around music videos. For that, viewers have YouTube — as well as MTV's lower-stakes spinoff channels — and besides, if you're old enough to remember when MTV's programming revolved around videos, then you're almost certainly too old for MTV to care what you think.

But it's also fair to say that MTV has been experiencing an identity crisis — magnified in recent years by a ratings decline, as well as the laying off of most of its online editorial team this past June — for as long as its desired demographic has been alive. On Sunday at 8 p.m., when the 36-year-old network hosts its annual Video Music Awards, MTV will enjoy a day of outsize cultural relevance, which suggests a greater challenge for a business based on attention. That is, to extend the network's cultural reach beyond the thin slice of late summer in which we currently reside.

To that end, MTV — which the network's press materials describe not as Music Television, but as "a global youth culture brand inspired by music" — is in the midst of a radical overhaul, overseen by network president Chris McCarthy. It's McCarthy who dumped MTV's diverse and highly respected online staff (in an interview, he later expressed bewilderment at the group's interest in long-form writing), and it's McCarthy who recently announced MTV's plans to relaunch its Total Request Live franchise, once the Times Square home of hitmaking artists and the throngs of screaming fans who loved them. TRL will return with new hosts and a greatly expanded studio space on Oct. 2, in the hope of making the network more of a destination for fans and stars alike. And, of course, it'll give MTV a treasure trove of unique performances that can help magnify its online footprint via every viable social-media funnel.

As for the VMAs themselves, it's easy to write off the awards as a petri dish in which memes and other viral moments are almost destined to emerge. The VMAs, after all, are what gave the world Kanye West bursting onstage and interrupting Taylor Swift's acceptance speech with the immortal words, "I'ma let you finish." Other similarly hyped beefs — from Nicki Minaj vs. Miley Cyrus to Kid Rock vs. Tommy Lee, on back through the years — have helped cement the VMAs' place as a boozy rock-and-roll family reunion in which old grudges are renewed and rehashed. It's not unfair to view the night as silly, forgettable spectacle. (This year, Katy Perry hosts a telecast likely to tie in with the release of a new... something... by rival Taylor Swift. Stay tuned!)

But the VMAs also offer a fascinating window into what MTV thinks viewers want, with few other obligations to weigh it down. The Grammys, by comparison, need to function as an infomercial for the music industry, with awards doled out by that industry's veterans — music professionals across dozens of genres, spanning several generations — with an eye toward anointing musical ambassadors. The VMAs are programmed only to please the vastest possible audience at all times, which means award wins engineered to 1) make the audience happy; 2) reward songs and videos that are still fresh in people's minds; and 3) cement MTV's place as an arbiter of who's best and who's next. Watch the VMAs and you'll get a decent snapshot of the state of mainstream music — minus Luis Fonsi and Daddy Yankee's "Despacito," with its 3 billion-plus YouTube views, which was left off the list of nominations for reasons that remain disputed.

So what can you expect?

"Despacito" aside, you can expect a decent cross-section of summer 2017's biggest hits and hitmakers. Kendrick Lamar leads the field with eight nominations, including Artist of the Year and Video of the Year (for the gorgeously shot "HUMBLE." video), and he'll give what promises to be an electrifying solo performance. Pink, this year's "Michael Jackson Video Vanguard Award" winner, has been known to blow lesser lights off awards-show stages. Miley Cyrus has given the VMAs some of their most infamous and social-media-friendly moments, and she'll return this year; other major players include Katy Perry, Logic with Khalid, Lorde, Thirty Seconds to Mars, Fifth Harmony with Gucci Mane, The Weeknd, Julia Michaels, Post Malone and Ed Sheeran — a guy not exactly prone to onstage outrageousness, but who's been positively inescapable on the radio this year. Who knows? He and/or Jared Leto's Thirty Seconds to Mars may even trot out that rarest of modern-day VMA sightings: a guitar.

Which leaves only a few questions left unanswered: Will Taylor Swift perform, premiere a video, or sit out entirely? (The smart money's on Option No. 2.) With Kanye West nowhere to be found, who will give the VMAs the moments of bonkers meme-making they so desperately crave? (Miley, what's good?) And who will win the actual awards? "Despacito," having been left out of the nominations, may well get its revenge by winning the "Best Song of Summer" prize, which is chosen entirely via social media. Otherwise, if you're looking for big winners, the likeliest bets ought to involve someone in the Lamar/Mars/Sheeran axis.

But let's face it: The VMAs aren't about winners so much as a-meme-is-born moments. There's no sense in aspiring to be the Grammys — in the world of MTV, the greatest gift of all is to be remembered in the morning.

Video Of The Year

Artist Of The Year

Best Fight Against The System