Accessibility links
Walter Becker Was A Master Of Musical Understatement : The Record If pop music is a constant tug of war between the reassuringly familiar and the jolt of the modernist new, the Steely Dan guitarist's gift was the ability to hit both extremes at once.

Walter Becker Was A Master Of Musical Understatement

Walter Becker Was A Master Of Musical Understatement 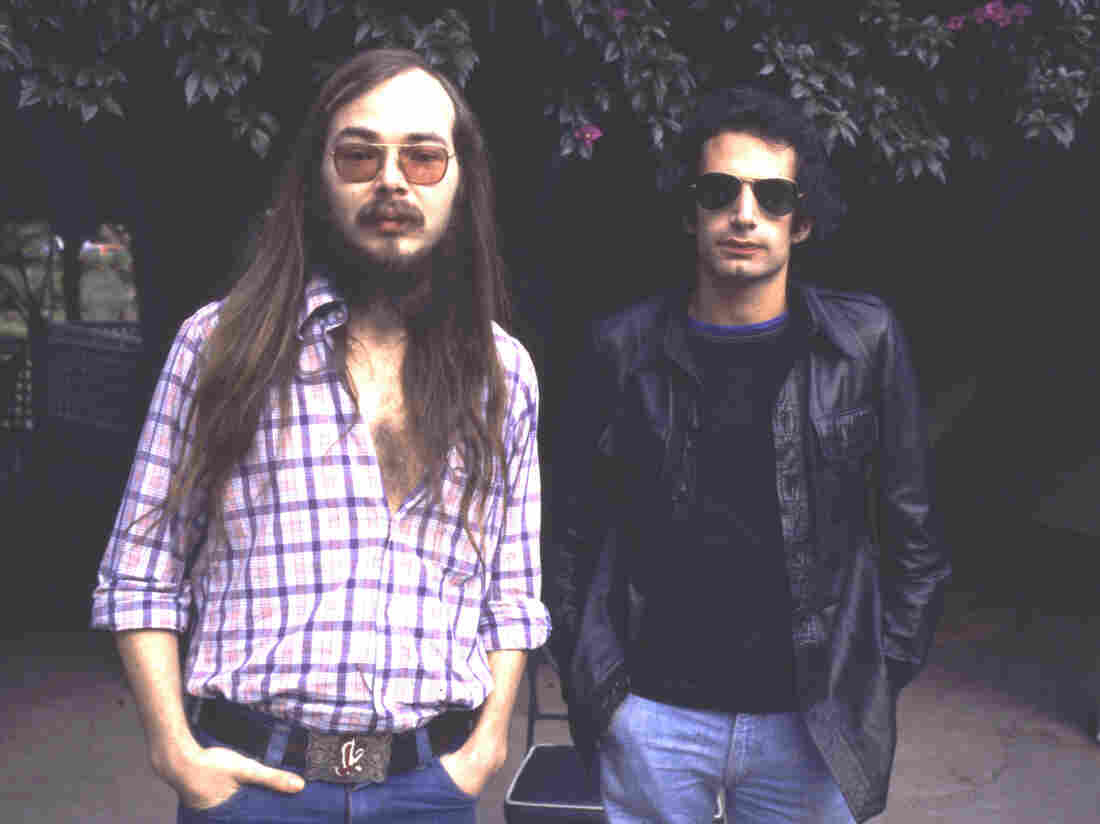 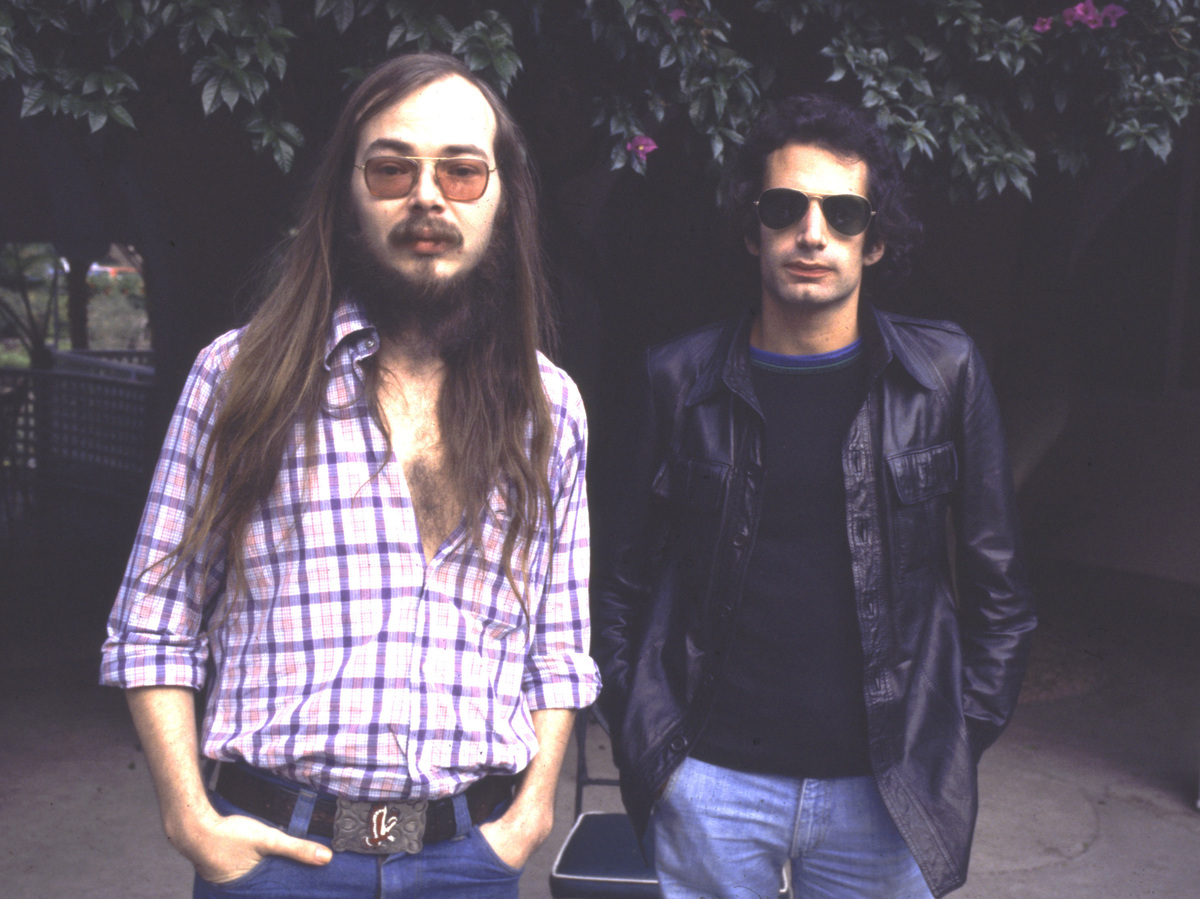 Don't look for Walter Becker on those endless (ridiculous) listicles ranking the "Guitar Gods of the 1970s." He's rarely mentioned in the same breath as major dudes like Eric Clapton, or Jimmy Page, or Duane Allman, or Carlos Santana, or Billy Gibbons, or Frank Zappa.

Becker, who died Sunday at the age of 67, stands apart from that class, off in a semi-neglected dark corner, his contribution to the rock canon less clearly defined. He had technical dexterity on the guitar, but was hardly a shredder. Or a flamethrower. He didn't grandstand. Sometimes he didn't even play the big solos — he regularly hired studio hotshots to provide firepower on the Steely Dan hits he cowrote with keyboardist and singer Donald Fagen.

If pop music is a constant tug of war between the reassuringly familiar and the jolt of the modernist new, Becker's gift was the ability to hit both extremes at once. What Becker added to Steely Dan was an elusive strain of magic — the terse little melodic thing that turned out to be exactly what the music needed. And nothing more. He represents a flickering high-water moment for understatement in rock, and his work — spread across nine meticulously crafted studio albums with the band, two solo projects and production on records by Rickie Lee Jones and others — is a lesson in the ways wickedly irreverent left-field inspiration can expand and multiply the pleasures of a pop song.

The basic Steely Dan formula has been described, in a reductionist way, as "jazz chords with backbeat-heavy grooves." It was more than that, of course: Fagen sang from a place of caustic, urbane cynicism, and his tone (astringent, with undertones of exasperation) gave significant dimension to narratives about wild gamblers, drug-dealing athletes and faux hipsters. The stories work because at heart, the guys doing the telling were romantics, versed in the yearnings of Great American Songbook tunesmiths and the beat poets that came later. They understood both the importance of formal structure and the desire to subvert the rigors of form.

Becker and Fagen were also known jazzheads, and the music of Steely Dan embraces some verities of Sinatra-era song — the bridge sections and tricky chord progressions — while rejecting the smoother happily-ever-after storybook narratives. The duo worked on the lyrics and every other aspect of the songs together, and though Fagen was the "voice" of Steely Dan, his edge-of-sarcasm tinge needed softening. The sleek, streamlined cool of the music, that faint essence of sophisticated lounge culture, helped offset the abrasion of the lead vocals. Much of that "interior" sonic landscaping can be traced to the stealthy spotlight-avoiding Walter Becker.

Investigate any of the Steely Dan songs that became earworms, and somewhere in the vicinity of the vocal hook, you will find a slight, seemingly insignificant instrumental gesture, a morsel that lifts the music higher. The angular five-note opening phrase of "Josie" from Aja. The burbling talkbox-guitar counterpoint that underpins the sordid tale of a "Haitian Divorce" or the talkbox emulation of Depression-era brass on "East St. Louis Toodle-Oo."

Becker was a conjurer, sly and tactical. His lines could be weird and skronky while also accessible and melodic. He used strange configurations of notes and chords that at first seem odd, but later register as devastatingly apt. He had the basic guitaristic things covered — the Malibu singer-songwriter strumming and the greasy Memphis R&B rhythm, the arena-rock pitchbending caterwaul and the precision-minded Wes Montgomery octaves — yet rarely deployed them in conventional ways.

And though he took his share of solos (for ear-stretching delirium in a blues context, check out his romp on "Black Friday" from 1975's Katy Lied), some of his most intriguing work is embedded in the background – the architectural arpeggios of "Aja," or the wry, blues-tinged asides that dot the margins of "Hey Nineteen."

Becker approached his guitar and bass playing (and, really, the entire production) as part of the songwriting process, an extension of it. He and Fagen were both obsessed with tone; there are countless stories of the duo chasing a particular snare drum sound for days on end in the studio. As a guitarist, Becker understood the ways distortion and other textural effects could change the atmospheric pressure of a track, and he used these devices to more musical ends than most guitarists. Becker's rhythm-guitar accompaniments had a spiky, almost confrontational air. His bass playing was devastatingly simple, a smack to the gut. His leads could be brainy or spooky or confounding or obtuse — whatever would best enhance the vibe of the song.

Where most guitar heroes of his era charged into the center ring with fistfuls of notes and blazing chords, Becker preferred to sneak in through the back door, and in just a few measures and fewer notes, rearrange all the furniture. The result was something instantly riveting that you'd want to hear again and again — even if (especially if) you were not even paying attention to what the guitar was doing. Forget about the moment of solo glory; Becker wanted — and attained, with astounding consistency — the thick and undeniable vibe that made a piece of music magnetic.

And when Becker couldn't conjure the mojo he heard in his head, he'd bring in a sharpshooter for the job. From one perspective, Becker managed the Steely Dan records as guitar salons, gatherings of prodigiously talented musicians who were tapped for strategic vibe infusions as Becker and Fagen's vision evolved. Among the highlights: Larry Carlton's searing "Kid Charlemagne" from The Royal Scam, Denny Dias playing electric sitar on "Do It Again" and guitar in a post-bop jazz mood on "Your Gold Teeth II." The list goes on, and extends to "Lucky Henry" from Becker's underappreciated 1994 solo effort 11 Tracks of Whack, which features brain-melting turns by Dean Parks and Adam Rogers.

All of those moments are improvisational, and reveal unique traits of each contributing instrumentalist. Yet they're also the deliberate product of the duo's refined aesthetic — if Becker is somewhat invisible from note to note on the records, he and Fagen are inescapable as creators and refiners of a instantly identifiable sound. Very few rock-era acts evolved the way Steely Dan did — from a modest live unit into architects of a high-gloss, impossible-to-replicate studio signature that sprouted new atmospheres with each album.

In a 1993 interview with Musician magazine, the two discussed just what went into those cameo performances. Becker noted that the musicians they hire are "prepared to go way beyond" the strictures of most pop or commercial work. "So when the right context comes along, they get a chance to do what they rarely get to do." Fagen picked up the thought: "Soloists are challenged by the complexity of the chords. When we write, the arrangements are set up to make the soloist stand out. There'll be a modulation or something to help him sound good. We build things into the arrangements the way a good big-band arrangement does."

That's a tip-off to another key aspect of Steely Dan's art: For all the ironic irreverence, for the many interviews where they claimed to have discovered a new tonality ("Mu Major"), Becker and Fagen were cognizant of tradition. Like many record nerds, they could even at times be described as sentimentalists. They understood songform as practiced by Irving Berlin and the great Tin Pan Alley tunesmiths. They knew the rhythm-intensifying tricks that made the bands of Ray Charles and James Brown and Otis Redding so electrifying. They sweated the arcane details of groove and refracted them in ways no band had done before.

At several points in their multi-decade run, Becker and Fagen were forced to confront another legacy — their own. They responded with typically droll humor. In the 1993 interview, they talked about launching what became the first extensive Steely Dan tour since 1974, and were asked whether they would represent their body of work by playing the big hits.

Fagen responded first. "'Body of work' has a nice kind of cadaverous ring to it."

Becker jumped right in: "We examined the body of work for signs of abrasions or lesions."

Fagen: "And found that the time of death was sometime in late 1974."

Becker: "Unfortunately, the body was too dumb to lie down and continued to roam the earth for some years longer."

As of Sunday, that's no longer an option. And the music world is just a little bit diminished as a result.