Accessibility links
Mapping The Vast Influence Of Holger Czukay, Alchemist Of Krautrock Legends Can : The Record Czukay, who died at his home — also his former band's studio — in Germany, was a classically trained musician whose influence seeped deeply into music history.

Mapping The Vast Influence Of Holger Czukay, Alchemist Of Krautrock Legends Can

Mapping The Vast Influence Of Holger Czukay, Alchemist Of Krautrock Legends Can 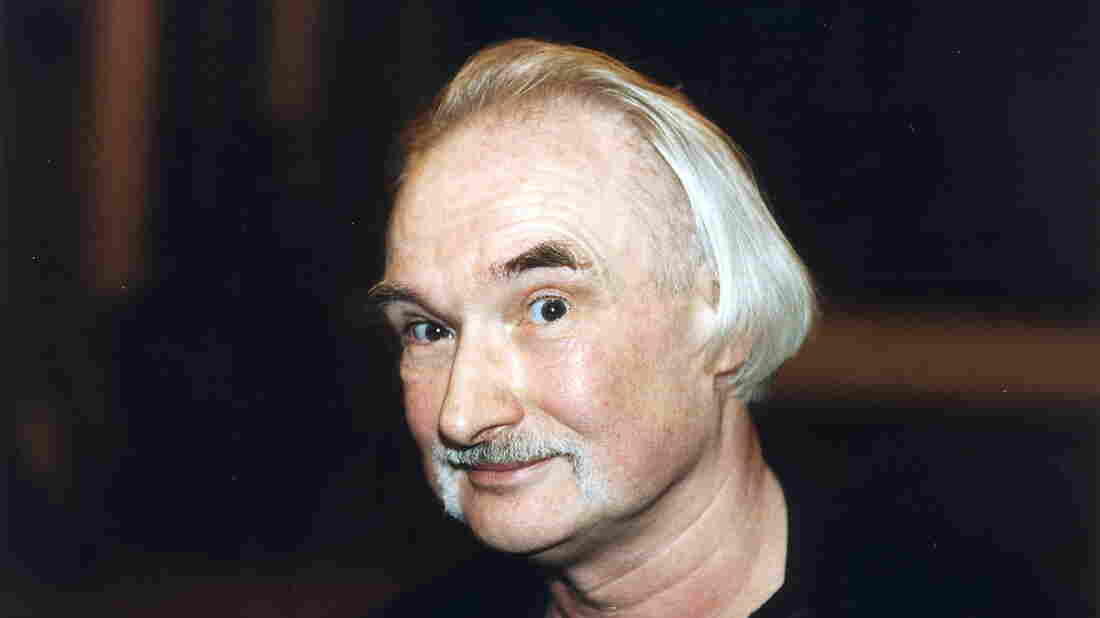 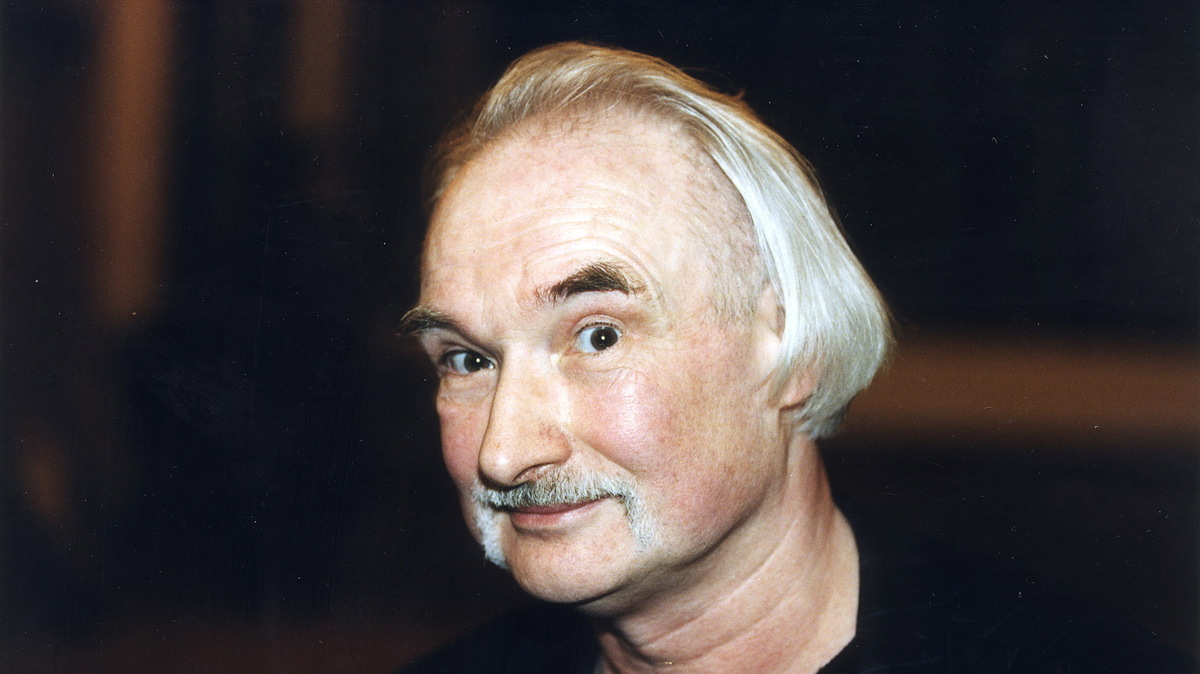 Holger Czukay of Can, who died Sept. 5 in Weilerswist, Germany.

"We are very sad to confirm that Holger passed away yesterday, in his home, the old CAN Studio in Weilerswist. His wife U-She passed away only weeks before. Holger was devastated by the loss of his beloved partner, but was looking forward to making more music and was in good spirits. His passing has come as a shock."
— Can, in a statement issued Sept. 6. Czukay was 79 years old.

In early 1983, the French-born New York DJ François Kevorkian, a drummer who had proved his mettle as a dance-floor remixer, took the opportunity to make a record of his own for Island Records. It would be a collaborative work with an all-star lineup that included Public Image Ltd. bassist Jah Wobble and U2 guitarist The Edge, as well as the rhythm section for the already mythical German avant-rockers Can; the sessions would yield the EP Snake Charmer.

Around that time, a young woman making waves of her own in the city's clubs asked Kevorkian to mix her new single. He turned it down — as Kevorkian told author Tim Lawrence in Life and Death on the New York Dance Floor 1980-1983, he was "so taken with this other project" that there simply wasn't time. Sorry, Madonna — when Can's bassist Holger Czukay said yes, few musicians said no.

It feels somehow inapt, though, to simply identify Czukay as "Can's bassist." Holger Czukay was the band's co-founder (along with keyboardist Irmin Schmidt and guitarist Michael Karoli), its center, its de facto leader, its producer and engineer, its tape editor, its bassist, its radio knob turner (more on that later), and, effectively, its light and its shade. In its early-'70s prime, Can was dedicated to collective improvisation — as Czukay put it last year to Mojo, "We were not thinking. When you make music together, you have to reach a common accident." At its best, the group sounded like a single organism. But one man, Czukay, collectively tuned them.

Czukay was born in 1938 in the then-Free City of Danzig, was educated in Berlin alongside John Cage and David Tudor, and studied in Cologne under Karlheinz Stockhausen, all before moving to Switzerland in 1966 to become a music teacher. At that point, Czukay had barely heard rock music, much less understood and appreciated it. "I never intended to become a rock or pop musician," Czukay said in 1994. "What I wanted to become was like from childhood on I thought I was a creative person."

That changed after meeting a young student named Michael Karoli, who played guitar. "Michael was arrogant, really arrogant," Czukay told Mojo. "But he was trying to teach me something about music. He knew something that I didn't know." When Karoli played The Beatles' "I Am the Walrus" for Czukay, the teacher flipped: "I thought, 'How can they make something like that? It sounds sometimes more [akin] to Stockhausen than to The Beatles!" he told Mojo. ("Stockhausen later told me how proud he was that the Beatles have put him beside W.C. Fields on [the cover for] Sgt. Pepper," he added.)

Can's initial lineup, formed in 1968, featured American vocalist Malcolm Mooney — soon replaced by the itinerant Japanese street singer Damo Suzuki — and drummer Jaki Liebezeit. Early on, Czukay told Mojo, "I tried conventional bass, but then Jaki said, 'Holger, don't play where I play. Never try to double a foot drum, you play somewhere else.' " Their resulting rhythmic push-pull, with Liebezeit's taut metronome full of hesitant accents and Czukay's supple, driving low end, enacted a truly unique, and highly European, take on American rock that would be given its own handle: Krautrock, named for a 1973 song by fellow German outfit Faust.

Minimalism was the key term: Nobody repeated one or two bass notes and made them count like Czukay. From 1968 to 1975, Czukay recorded the band's group-mind improvisations onto two-track tape, then edited them into coherent pieces. "When you make a two-track recording you still have the choice to erase, to put holes into it," Czukay said in 1989. "The holes are sometimes even more important than the actual sound." In 1976, amid other lineup changes, Czukay switched from bass to shortwave radio — like his Stockhausen, he liked to use them "as unpredictable synthesizers," he said in 2009. Czukay officially left Can in 1977, though he would edit the tapes for 1979's Can and participated in short-lived group reunions in the late '80s and late '90s.

The classic early Can sound — as heard on Monster Movie (1969), Soundtracks (1970), the monumental double-LP Tago Mago (1971) and the dryly funky Ege Bamyasi (1972) — was both stark and airy, with Karoli's needling guitar hanging over the groove like cobwebs in a haunted house. The title of Soundtracks wasn't just suggestion — the tracks had actually come from film-score commissions — but its suggestion of filmic vistas was also a guiding principle for both the band and its bass player. Not for nothing did Czukay dub his first solo album Movies (1979). (Last year it was reissued as Movie! — a perfect example of the whimsy Czukay displayed in his later years ... along with all the goofy-uncle faces he made in photos during the '90s.) 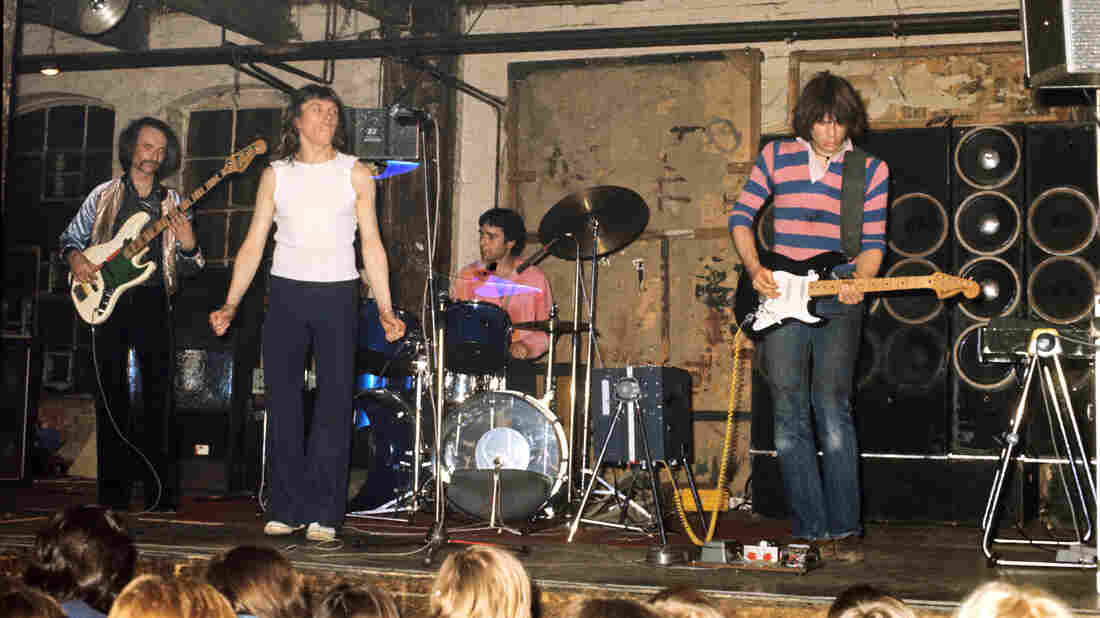 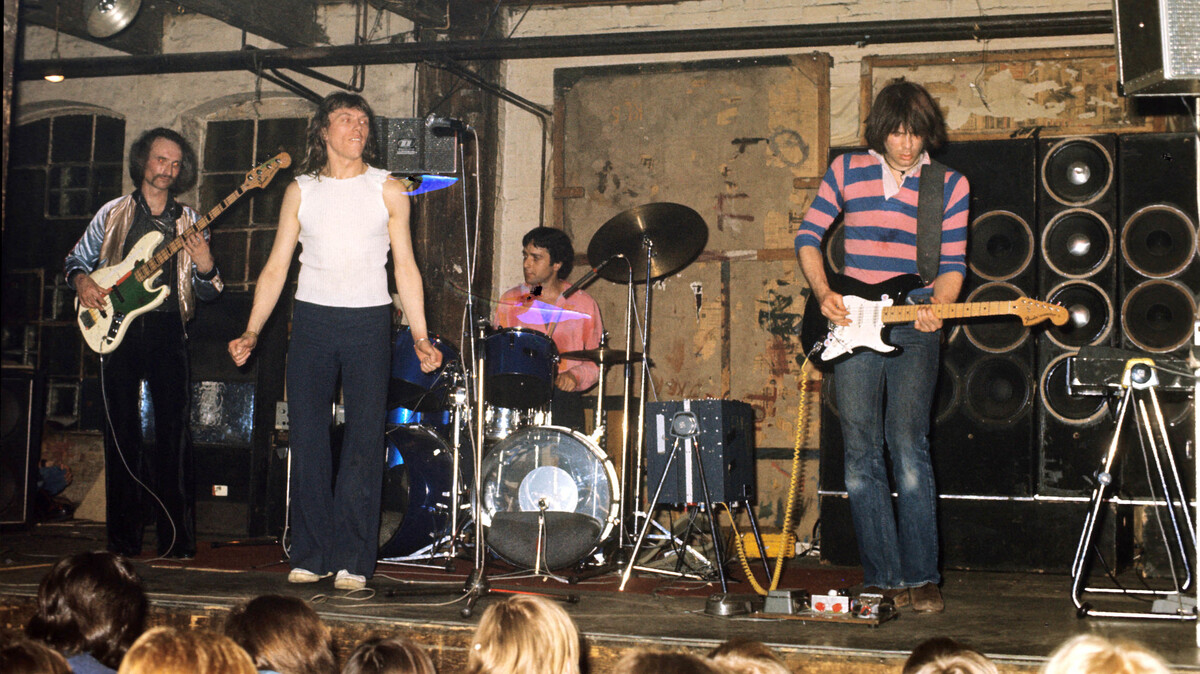 Can performing in Hamburg, Germany, in 1977.

In fact, Czukay's shortwave sound-grabs on Movies — a kind of proto-sampling — would prove prophetic. David Byrne and Brian Eno would borrow the idea for their My Life in the Bush of Ghosts (1981), which hip-hop producer Hank Shocklee of the Bomb Squad (Public Enemy, Ice Cube, Bell Biv DeVoe) would cite as a key inspiration for his own sampling adventures.

With its long tracks and stop-and-start sonic tendencies, Can was "progressive rock," broadly defined. Nominally, this would make them punk rock's enemies. But when the Sex Pistols' Johnny Rotten — who had famously written "I hate" on the top of a Pink Floyd T-shirt — appeared on London's Capital Radio to play records for two hours on DJ Tommy Vance's show on July 16, 1977, his penultimate selection was Tago Mago's 18 1/2-minute "Halleluwah." ("They've got the most amazing drummer," he enthused.) When Rotten reverted to his birth name, John Lydon, and formed Public Image Ltd., he recruited his old friend Jah Wobble (John Wardle) on bass, a fellow Can fanatic whose imperturbable bass lines were rooted deep in Czukay's playing. After leaving PiL, Wobble would collaborate with Czukay and Liebezeit on 1982's Full Circle; that album's "How Much Are They?" would become a big favorite of David Mancuso, disco's foundational DJ, at his famed Loft parties.

Can runs through British post-punk and indie like fish through a river. The Fall, in particular, has flaunted the Germans' inspiration, most explicitly on "I Am Damo Suzuki," from 1985's This Nation's Saving Grace; drums a la Tago Mago's "Oh Yeah," guitar a la "Bel Air" from 1973's Future Days, bassist Steve Hanley hammering a couple of notes and daring you to blink. The Jesus and Mary Chain's Barbed Wire Kisses featured a version of Tago Mago's "Mushroom"; the great Irish drone-rockers Th' Faith Healers covered "Mother Sky" on their 1992 debut, Lido. Primal Scream has paid explicit tribute twice: "Movin' on Up," the opener of the beloved 1991 album Screamadelica, directly quotes "Yoo Doo Right" ("I was blind / Now I can see / You made a believer out of me"), while 1997's "Kowalski," from Vanishing Point, samples the drums from Tago Mago's "Halleluwah."

Can's skittering rhythms haven't been sampled at the level of James Brown (a primary inspiration to the German band), but especially in recent years the group has made its mark on hip-hop: "Vitamin C" was utilized as theme music for Jaden Smith's character Dizzee on Netflix's The Get Down, while A Tribe Called Quest sampled "Halleluwah" for its Phife Dawg tribute "Lost Somebody" on last year's We Got It From Here . . . Thank You 4 Your Service.

Other DJs made hay with Czukay's grooves as well. During the early British rave scene of the late '80s, DJ Harvey was pushing the acid-house envelope: "He was really experimenting and bringing in all kinds of radical stuff," his fellow DJ Thomas Bullock told me a few years ago. "I heard [him play Czukay's] 'Cool in the Pool' and 'Persian Love' [from Movies] both [in one] night, and I thought it was all a part of the very same tapestry. I was completely taken out." Years later, when James Murphy wanted to send up himself and his fellow record geeks (in that order) on the first LCD Soundsystem song, "Losing My Edge," in 2002, it wasn't an accident that his first false boast was, "I was there in 1968 / I was there at the first Can show in Cologne" — or that the track's galumphing rhythm, puny at first before ratcheting up to a series of explosions, could have come straight off Monster Movie or Soundtracks.

But the most resonant place to understand Czukay's place in the post-rock musical continuum may be at the end of 2009's The Grandfather Paradox, a DJ-mix CD by Henrik Schwarz, Âme & Dixon subtitled "A Journey Through 50 Years of Minimalistic Music." There, "Sunday Jam," a Czukay-edited track from 1979's Can, finishes off a set that sets him, and them, alongside forebears like Steve Reich, Raymond Scott and Moondog, and followers such as Liquid Liquid, Young Marble Giants and minimal techno innovator Robert Hood. This is Holger Czukay's immersive circularity in a nutshell: looking back, looking forward.

Below, a playlist of the songs referenced above, both from Can and from the many artists the group influenced. Enjoy.