Accessibility links
From Baptist Roots To The Bedroom, Demo Taped Gives His Electro Groove A Gospel Redux : The Record The Atlanta anomaly and Young Thug labelmate faces his anxieties on new single, "Insecure."

From Baptist Roots To The Bedroom, Demo Taped Gives His Electro Groove A Gospel Redux

From Baptist Roots To The Bedroom, Demo Taped Gives His Electro Groove A Gospel Redux 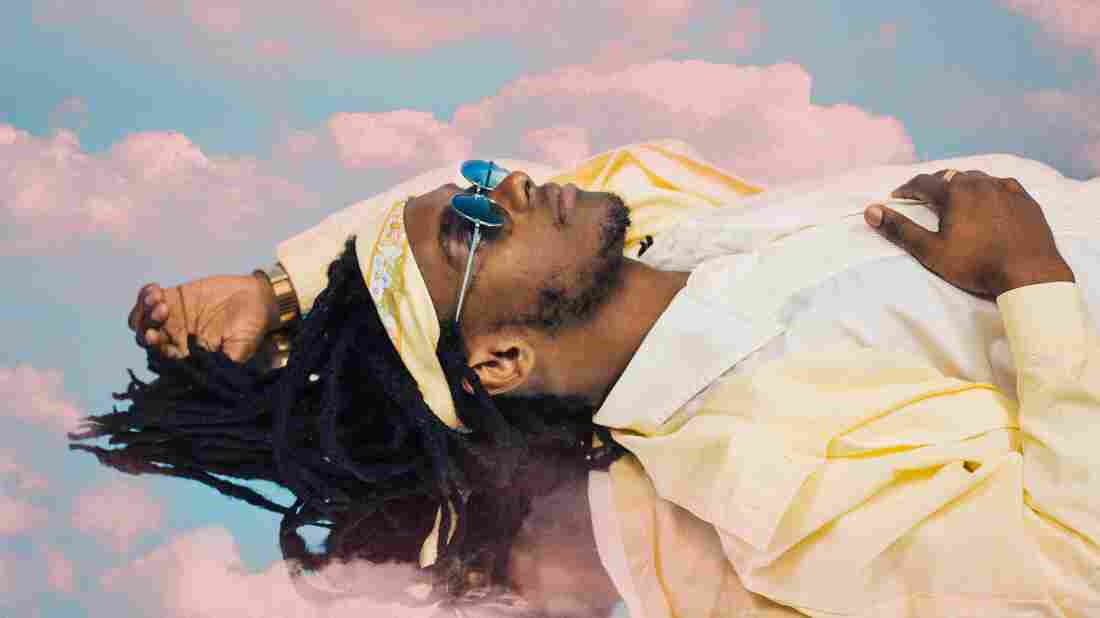 Demo Taped works his way out of the blues by returning to his gospel roots on "Insecure." Savana Ogburn hide caption 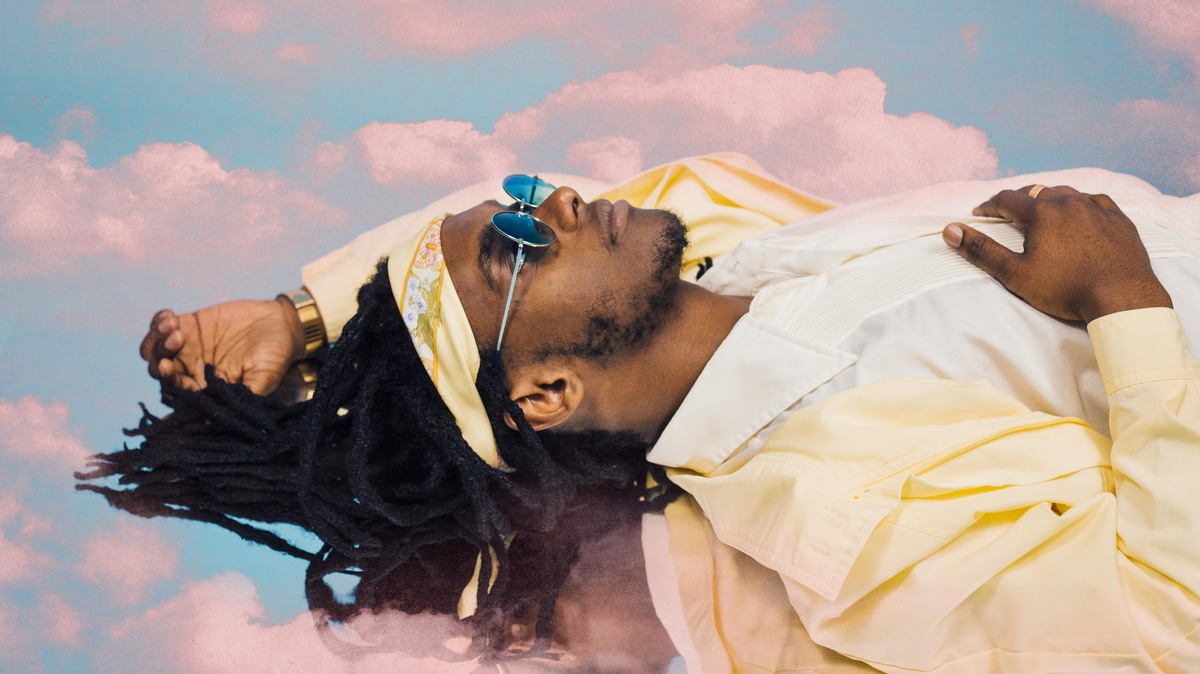 Demo Taped works his way out of the blues by returning to his gospel roots on "Insecure."

In the age of SoundCloud rap, 19-year-old Demo Taped's rise from unknown Atlanta-bred music prodigy to 300 Entertainment signee isn't all that unusual. That he's ascended from hip-hop's bedrock city to the house that Lyor Cohen built while making something other than hip-hop? That's totally out of the ordinary.

Instead, the bedroom producer and singer-songwriter has developed a sound steeped, over the last couple of years, in colorful synths and bouncy electro grooves. But Demo Taped has stripped down of late to reveal some surprisingly soulful, church-ified roots underneath all that DIY digital sheen. It's part of a personal transformation that finds him climbing from a shell of depression and anxiety at a time when some of the biggest artists of his generation are topping the charts by wallowing in it. 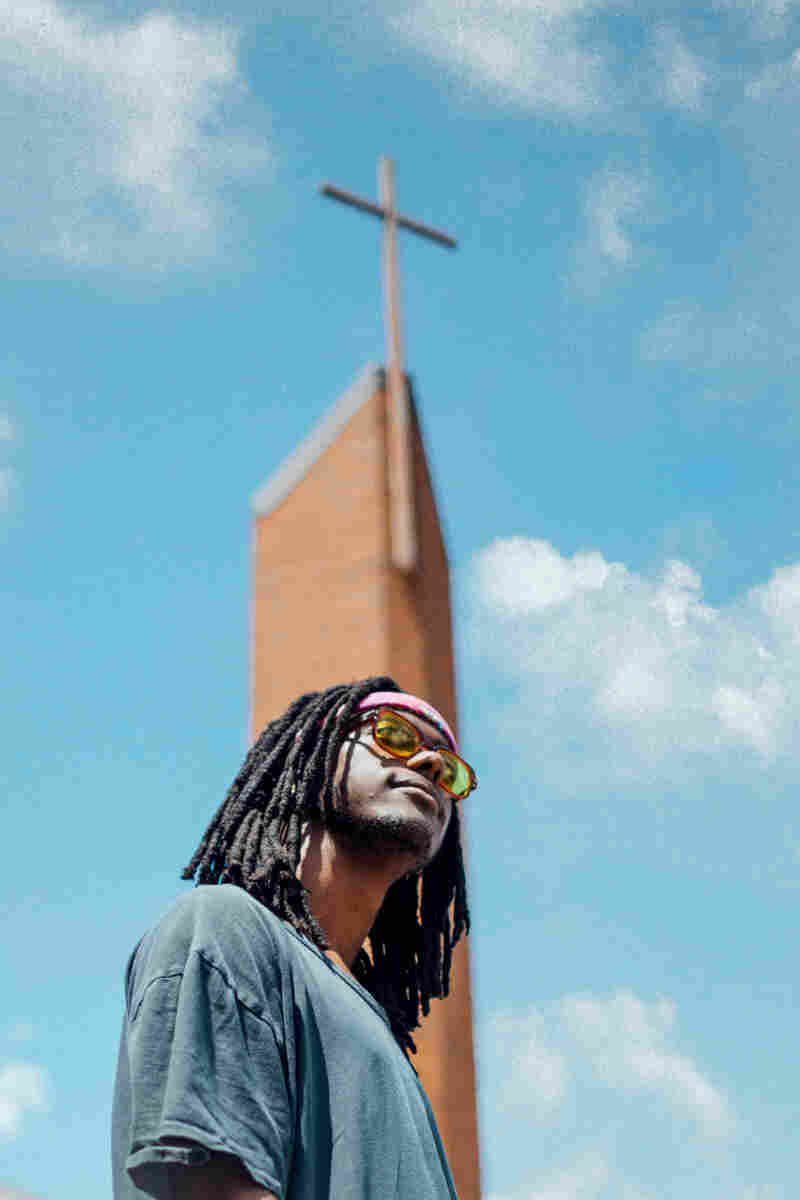 The bedroom producer with the electro sound stands out as an Atlanta anomaly among such labelmates as Young Thug. Savana Ogburn hide caption 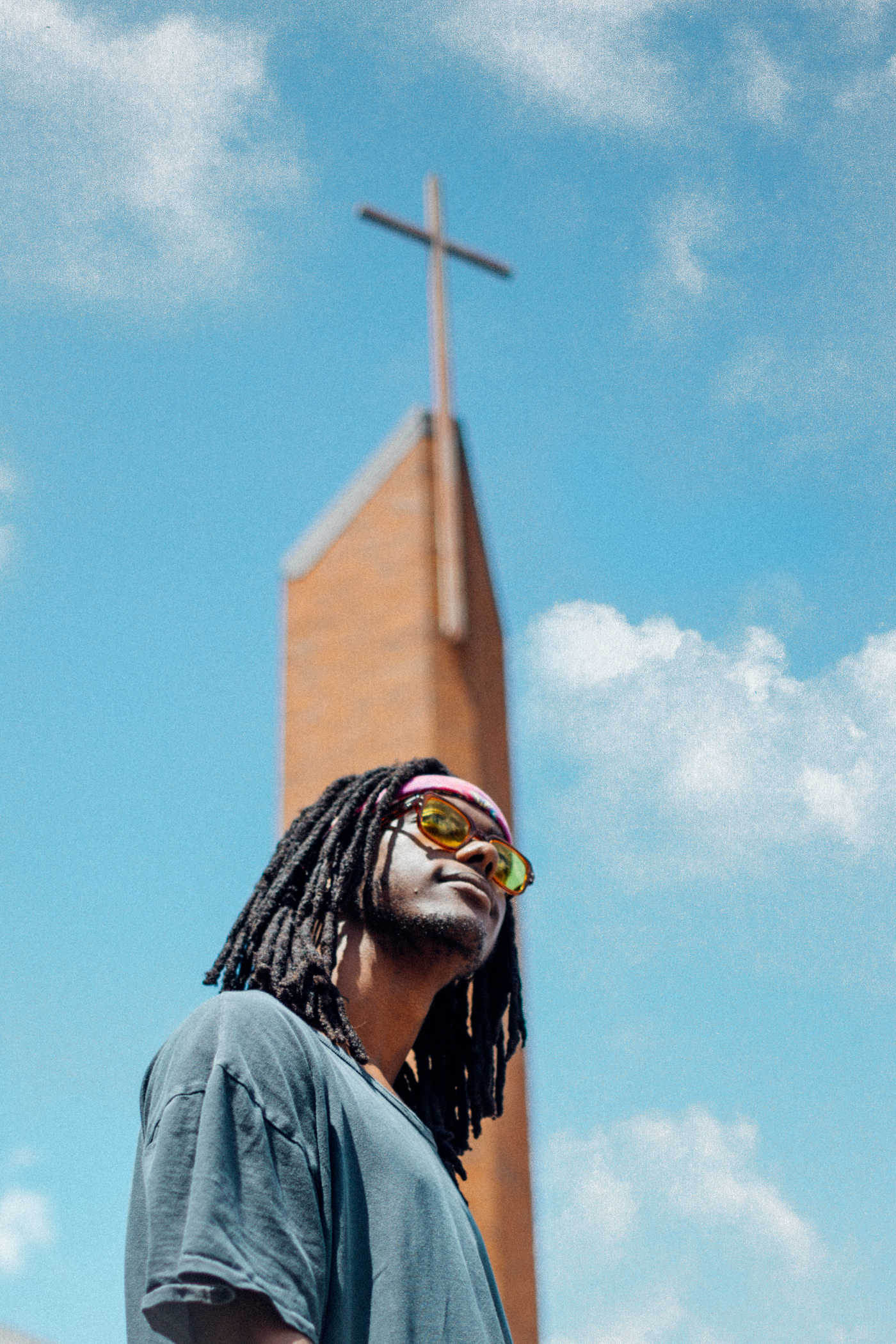 The bedroom producer with the electro sound stands out as an Atlanta anomaly among such labelmates as Young Thug.

I met Demo Taped (the name Adam Alexander goes by) and his dad back in July at Antioch, the historic Baptist church on the edge of Atlanta's Westside, where he grew up a suburban kid singing in the children's choir. His ties to the congregation, founded in 1877, are bound in blood: His grandfather, Rev. Cameron Madison Alexander, has pastored Antioch Baptist Church North since 1969, and his dad, the musical director, has been playing from the pit for as long as Demo Taped can remember.

He's foregone his Sunday best, when we meet one morning in the middle of the week, for a tie-dyed t-shirt and a paisley head scarf neatly folded and tied around the back of his shoulder-length dreads. While taking me for a tour around the sanctuary, he points out his favorite pew in the side balcony overlooking the choir stand, giving him a bird's-eye view of the action below. "It's a good place to experience a lot of the music," he says, not to mention the best place to catch the flow of the spirit. "You can see how everything's moving, how a black church operates. It's a very beautiful thing."

His coming-of-age story mirrors that of the classic preacher's grandkid who grows up singing solos before reaching that fork in the road between gospel and secular. Even early on, he'd written songs of his own. "Super nerdy stuff," he says, recalling a song about fire-breathing dragons. "I never really thought I could do gospel because, in my mind, I wasn't skilled enough to do it."

But it didn't keep him from dreaming about it as a kid, when he'd look out at the congregation. "It's a very spiritual thing when you can sing a song and have people feel a lot closer to God. When I was up there, I distinctly have memories that this would be great to do as a career."

In early 2015, he released his first project, the three-song Heart EP. A bright electronic soul project defined by Demo's soft vocals and melodies, it garnered enough industry attention for him to eventually be handpicked by the likes of indie rock duo Sylvan Esso to remix two songs ("Radio" and "Kick Jump Twist"). But Demo's newest song, "Insecure," is a total departure from the electro-based sound for which he's quickly become known. Produced with the help of Canadian producer Frank Dukes (Drake, Rihanna, Future), it finds Demo both out of his element and in his comfort zone with its full-on gospel arrangement.

"The song is called 'Insecure' and I was very, very insecure while making it," he says, detailing the three days he spent in a New York studio tracking live musicians and giving direction to rising singer Yebba Smith, who provides backing vocals. "But can I be candid / I worry sometimes / The terror, the panic / Plays out in my mind," he sings on the song about how too much self-doubt can put a hole in your love life. Similarly, Demo Taped says he realized he had to get a grip in the midst of recording the song. "This was my first time really stepping out of the bedroom to facilitate everything as a producer."

But it's the Hammond B-3 organ driving the track that brought him back home. To record it, he returned to Antioch to capture the sound of the actual church organ he grew up hearing. "I love the sound of that instrument," he says. "Why do something on a computer when you can get the real deal?" 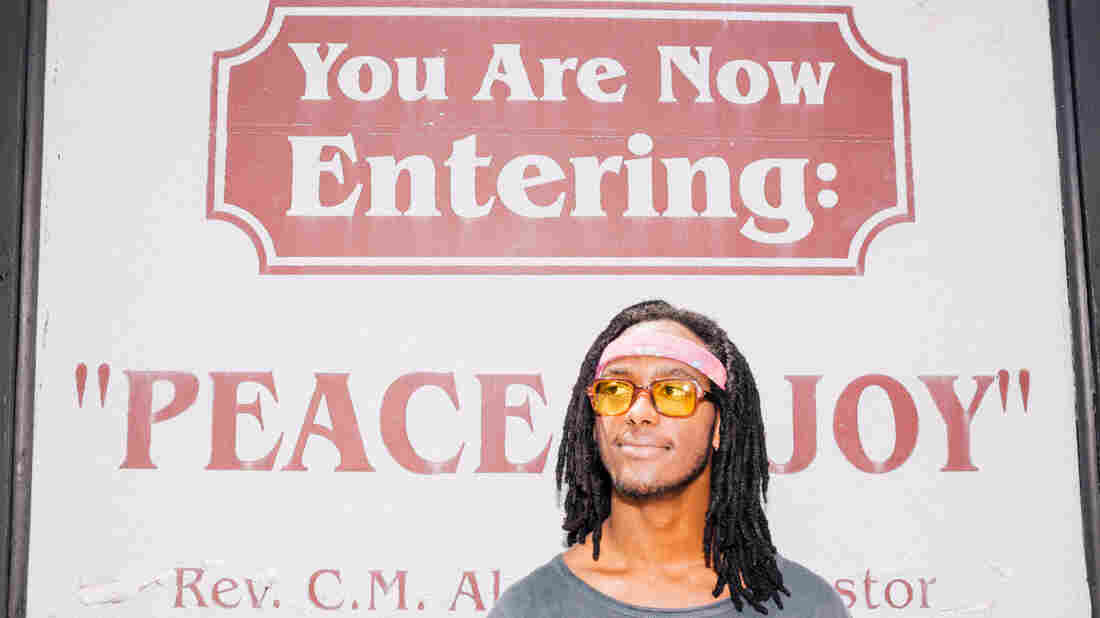 Demo Taped returns to his gospel roots, standing in front of Antioch, the historic Baptist church his grandfather has pastored for decades. Savana Ogburn hide caption 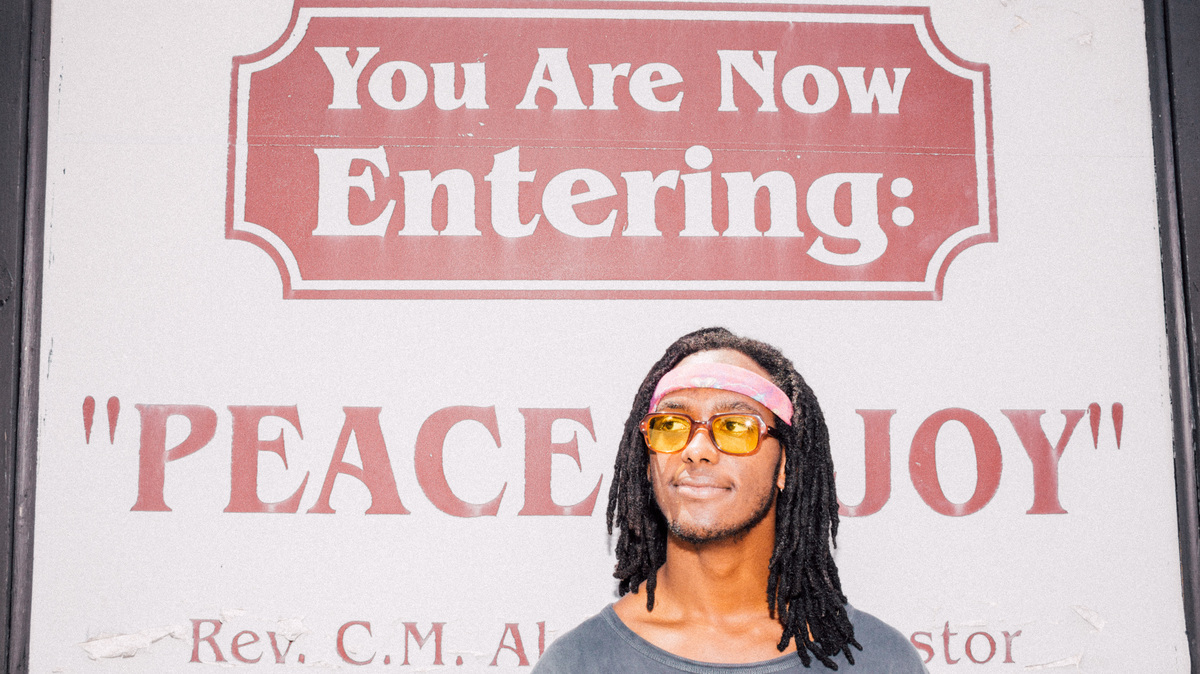 Demo Taped returns to his gospel roots, standing in front of Antioch, the historic Baptist church his grandfather has pastored for decades.

No doubt his grandfather agrees, which is partly why Demo made it. "I wanted him to have some music that I made that he could better understand," he says. "I played it for him really recently, and he genuinely enjoyed it."

"Insecure" has also been Demo Taped's way of ministering himself through the potholes of post-adolescence. "Gospel music, to me, has always been comforting, has always been a source of healing," he says. "Everybody's been through something and this music is a representation of the healing power of God and what that can do for you."

That doesn't mean he plans to power down his electro sound. Instead, he intends to further explore the connecting points between more genres on his forthcoming EP. Though he has yet to reveal the title, he did expound on its theme as he stood near the church's pulpit, drawing out his thoughts with a preacher's cadence. "The things of this world, they're not, in my mind, to be taken too seriously — not all things, obviously, but certain things that people obsess over nowadays. I think that it's a waste of time," he says. "It's kind of just about being human and coming of age, too, and trying to figure it all out. But also remember[ing] that the sadness, the anxiety that I've suffered with for awhile, it's all just short-lived in the grand scheme."

That's a different mindset from the one powering new releases by the likes of Lil Uzi Vert and XXXTentacion to the top of the Billboard 200 in recent weeks. While a preoccupation with suicide and depression has become a notable thread in mainstream rap, Demo stresses that such feelings are not fuel for creativity. It's taken therapy and treatment for him to come to that understanding himself, and the popular trope of the tortured artist is one he no longer subscribes to. "I always thought if I ever became well that the creativity would stop and the music would stop, because then I wouldn't have anything to write about," he says. "And that's just not true."

But he's also used to being the anomaly, especially in the trap capital, Atlanta. "I've never really had a scene to identify with here, if I'm being honest." Even as a recent signee to 300 Entertainment, Demo has been the outlier among a rotating cast of ATLiens. Compared to labelmate Young Thug, whose penchant for growling and gurgling his way through verses has made him trap's biggest enigma, and Migos, who departed 300 for Capitol Records after the trio's latest album, C U L T U R E, debuted at No. 1 in February, Demo occupies his own unique, honest space.

"I'm kind of proud of what I'm doing," he says. "I have a voice and I didn't come this far based off nothing."