Accessibility links
Why Questlove's 201-Song Playlist For Keith Olbermann Is Bigger Than Hip-Hop : The Record Or, how I became the third wheel in a weekend Twitter beef over rap, culture and politics following Eminem's Trump tirade. 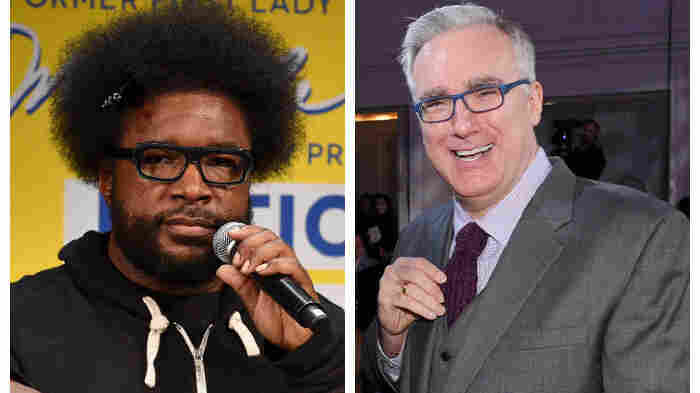 "How is [Keith] Olbermann on my side of the fence (politics) but not on my side (hip hop)?" The Roots' Questlove pondered before creating his Keith O Challenge crash course. Bryan Bedder/Getty Images for MTV/Getty Images for Paley Center for Media hide caption 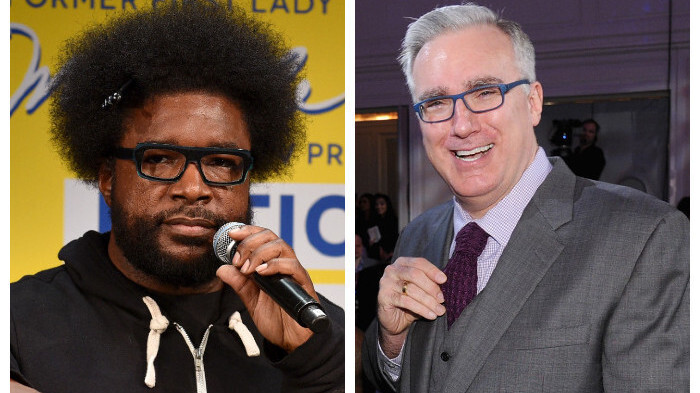 "How is [Keith] Olbermann on my side of the fence (politics) but not on my side (hip hop)?" The Roots' Questlove pondered before creating his Keith O Challenge crash course.

When it comes to music history, Questlove is an Afro-pick rocking compendium of knowledge. So when the co-founder of The Roots got wind that Keith Olbermann's come-lately compliment of Eminem's Trump smackdown was couched within a tweet that seemed to dismiss the entire genre of rap, he vowed to take the progressive pundit to school.

Olbermann, whose new book Trump Is F****** Crazy (this is not a joke) came out this week, was likely just tipping his hat to a fellow anti-Trumpite when he tweeted: "After 27 years of doubts about rap I am now an Eminem fan. Best political writing of the year, period." But the host of GQ's The Resistance unwittingly revealed his willful ignorance of the genre in the process.

I mean nothin shocks in these numb times but lol Bernstein saw beauty in the Beatles. You have to have your mind SET to shut out hip hop.

"You have to have your mind SET to shut out hip hop," Questlove wrote Saturday in a series of 23 (unthreaded) tweets that questioned how the political commentator — with whom the five-time Grammy Award-winner often agrees — could be so culturally un-hip. "Saying you ignored rap for 27 years is basically saying you're indifferent to the very black lives you champion on your platform."

Then he proceeded to do the most Questlovian thing ever. He made Olbermann a mixtape.

Titled The Keith O Challenge, the resulting 201-song playlist is now streaming on Spotify. (And before you ask whether this is just some promo deal on the low, you should know that Questlove is also a "strategic ambassador and advisor" at the competing platform Pandora, which airs his weekly Questlove Supreme podcast. In other words, he did this one for — you guessed it — the culture.)

But here's the twist: Questlove's playlist contains not one single rap song. We'll get back to that in a minute.

Turns out he wasn't Olbermann's only vocal critic over the weekend, or the first. After appearing on All Things Considered last Friday to parse the fallout surrounding Eminem's BET Hip Hop Awards freestyle, I continued my commentary, originally intended for my on-air conversation with Kelly McEvers, on social media.

i had sooo much to say on @npratc today about Eminem's Trump diss that i never quite got to my main takeaway, which can't be stated enough..

"[H]ow much rap have you listened [to] — or ignored — over the past 27 years?" I tweeted at Olbermann in a thread that somehow went viral. "[F]rom Chuck D to Joey Bad*ss, hip-hop has been the most politically outspoken genre of the last three decades."

The question posed to Olbermann was an attempt to grapple with all the misconceptions flourishing in the wake of Eminem's dis. With the hype reaching a mainstream pitch, Eminem's attack of the president's policies and personal character was being framed as some kind of first — as if hip-hop, and the bulk of African-American MCs who make up the genre, have been biting their tongues for the past year, and even the past 27, as Olbermann's tweet implied.

It revealed a deeper truth, in a sense. "By and large, white America still doesn't hear black people," I tweeted. And that in no way contradicts Nielsen's mid-year report for 2017, which ranked hip-hop/R&B as the most consumed music genre. Rather, it suggests that despite being entertained by our rhythm and modern-day blues, Middle America often fails to comprehend the black experience, even when painstakingly articulated. Hip-hop's righteous rage and political outspokenness still falls on deaf ears outside the culture. Eminem just echoed what his black and brown peers have been saying, spitting, screaming and streaming in record numbers for the past year and a half.

"So we don't get no credit for dissing Trump a year ago," West Coast rapper YG tweeted in the midst of last week's media frenzy. His song "F*** Donald Trump," featuring Nipsey Hussle, was released back in March 2016. It's one of numerous presidential critiques, ranging from profane to profound, released by artists including A Tribe Called Quest, Common, Kendrick Lamar, will.i.am, T.I. Amine, and a lot more.

The main thing that made Eminem's rehearsed freestyle different is his intended listener. He knows as well as anyone how much overlap there is on a Venn diagram of his fanbase and Trump's constituency. And that's no attempt to discredit Em because of his whiteness; he's an undeniable giant of the genre. But when his contemporaries of color take part in similar political discourse without receiving the same elevated platform or heightened fanfare, it highlights the insidious role race has played in the appropriation of black music since the industry's beginning.

By applauding Eminem's critique without full consideration of that context, Olbermann contributed to that historical downplaying. He shouldn't be expected to have an exhaustive knowledge of the genre; taste in music is totally subjective. But implying hip-hop lacks political heft is beyond laughable; it's legacy denial, whether intended or not.

Which brings us back to Questlove's monster playlist: More than 10 hours long and not one solitary rap song.

What it does contain, however, is a deep dive on the genre's genetic forebear: the funk. Questlove mines hip-hop's sonic DNA with heavily-sampled '60s/'70s classics from Earth, Wind & Fire, The Ohio Players, Sly and the Family Stone, The Meters, Booker T. and The MGs, Betty Davis, Diana Ross and, of course, a heap of James Brown.

It's a crate-diggers dream, full of familiar-sounding obscurities such as Dyke & The Blazers "Let A Woman Be A Woman - Let A Man Be A Man," notably sampled by artists ranging from Stetsasonic ("Sally") to Public Enemy ("Welcome To The Terrordome") to Tyler, the Creator ("Rusty"). There's Blackbyrds' "Mysterious Vibes" (Paris' "The Days Of Old," Big K.R.I.T.'s "Highs And Lows," et al.) and Faze-O's "Riding High" (EPMD's "Please Listen To My Demo" and more). The opening saxophone riff from Jay-Z's "Show Me What You Got"? It's in there, all languid and mellow, on Lafayette Afro Rock Band's "Darkest Light." And if you're looking for some of those uncleared gems buried in De La Soul's classic discography, still in digital limbo, you'll recognize the piano licks from Erma Franklin's 1969 cover of "Light My Fire" as the end transition of De La Soul Is Dead's "A Roller Skating Jam Named Saturdays."

Point being, this is deeper than rap. There's an entire cultural continuum that undergirds even the most commercial rubble of any genre. To doubt hip-hop is to dismiss its rich heritage and to shrug off the contemporary trials and triumphs of its progeny.

Though I seriously doubt Questlove ever saw the #KeithOlbermannMixtape hashtag I tweeted out the night before, hip-hop heads — whether afros or baldies like me — tend to think alike. The artist-scholar and occasional DJ probably already had the syllabus I'd merely alluded to cued up and ready to go. The best part is his 201-song playlist is just the jump-off. He's already promised to return next month with another installment.

More power to Questlove. It takes a special kind of emotional labor to play cultural ambassador to an indifferent audience. But to Olbermann's credit — and my surprise — he replied to my tweets the following day. "Hate to hit your narrative but I've been a fan of political protest music, rap and otherwise, for 50 years. My 'doubts' were about my personal tastes," he explained, before name-dropping a couple references meant to highlight his hip-hop bona fides. "I had Coolio and LL Cool J cassettes before I owned a CD player."

With that admission, he may have earned more pity than cool points. But point taken, nonetheless.

"Eminem's bodying Trump was the first time I got the thrill," Olbermann continued. "No disrespect intended, more a public questioning of my own tastes."

(4) Eminem’s bodying Trump was the first time I got the thrill. No disrespect intended, more a public questioning of my own tastes. https://t.co/b8CiLaxdtI

And every man should indeed be entitled to his own taste. But if Keith O ever feels the urge to challenge himself with a deep dive into hip-hop's historical and sociopolitical significance, Questlove's curated the perfect playlist for that.

I'll be bumping it on repeat in the meantime.