Accessibility links
Gord Downie's Final Album Is A Gift : The Record In 23 songs, the Tragically Hip frontman, who died last week, casts light outward onto those who mattered to him, with all the detail and generosity that made him one of Canada's most beloved singers. 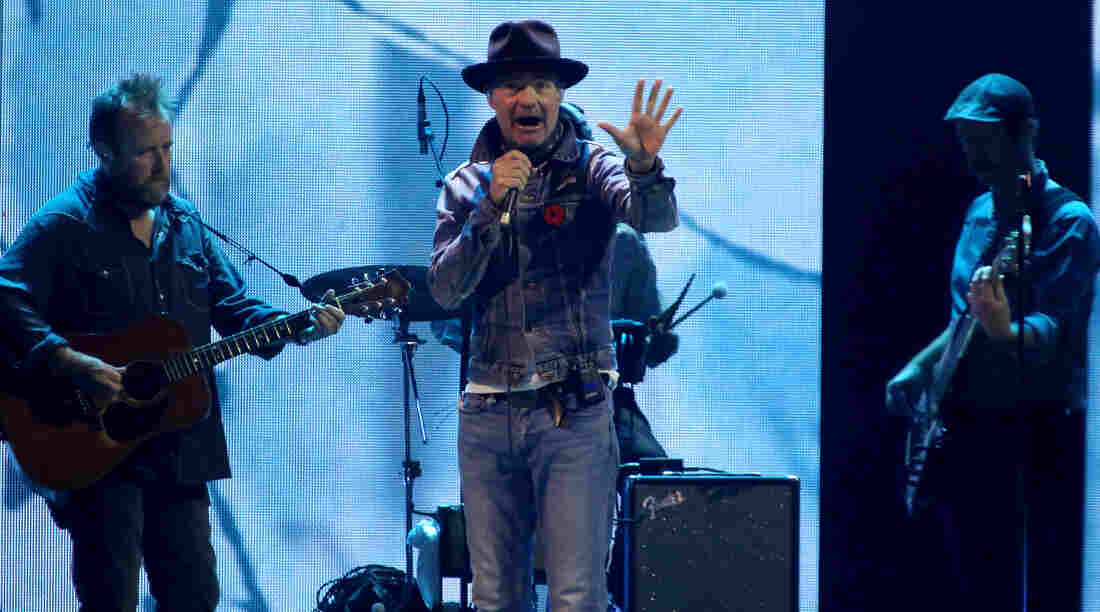 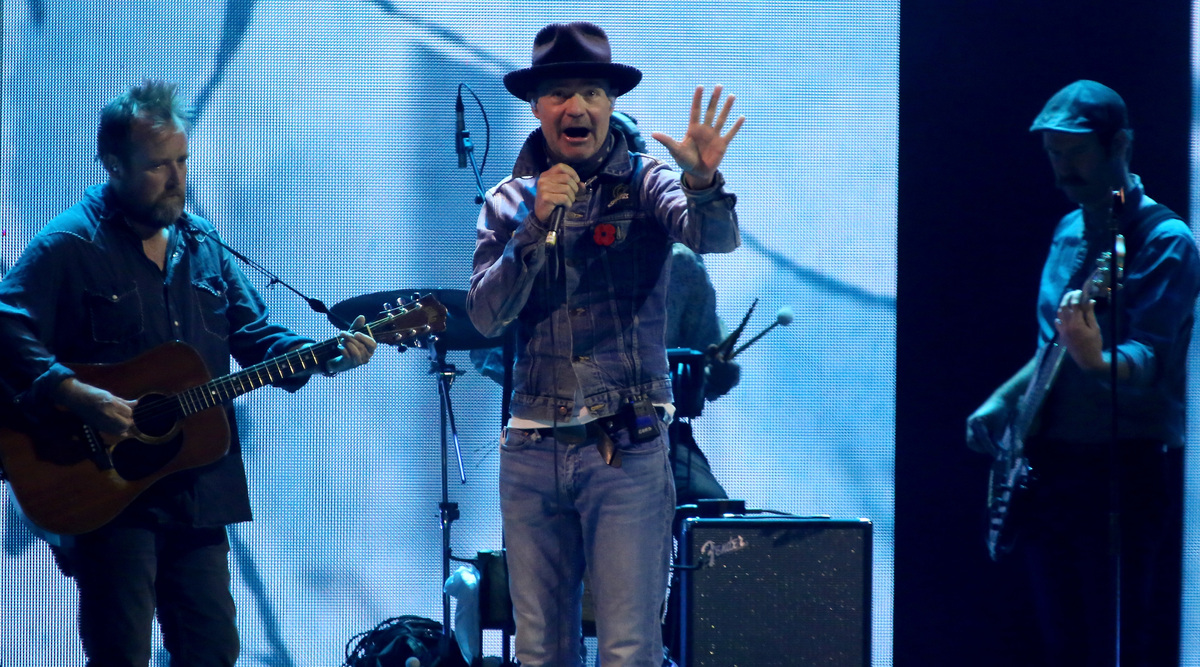 There can be no more personal or generous a gift from an artist to their fans than to say: Here is the museum of my heart as I prepare to die. Please come in. This room smells like Chanel No 5. It's the scent of all the letters sent by my old flame. That room is an exact replica of my baby's nursery. It's where we performed our old "Bedtime" routine: "I'd get you to your crib, slowly lower you down. Then pull my hands away, as if from a bomb. Then I'd step away, one step at a time, the floors were full of sounds, all the creaks of time." That window looks out at "The Lake," Lake Ontario. This frame holds a photograph of my first girlfriend, "the most beautiful girl I'd ever seen, so smart and funny," That display case holds a "Fukushima hotdog" I remember eating on the hood of a car once.

Gord Downie, Singer Of The Tragically Hip, Dies At 53

The carefully curated, technicolor details on Gord Downie's final album Introduce Yerself, out this week, make it easy to forget the walls of Downie's mind were threatening to crumble during construction. Downie's work, which takes the shape of 23 songs, each written about an individual in his life, began less than two weeks after he told loved ones he had an aggressive and terminal form of brain cancer. It was completed, with help from producer and dear friend Kevin Drew, over the course of two four day sessions in January of 2016 and in February of 2017. While the details of Downie's health and progress were largely kept private beyond the initial announcement made by his longtime band, The Tragically Hip, to fans in May of 2016, Downie gave an exclusive public interview to Canadian news anchor Peter Mansbridge in October of that year. Mansbridge's name is etched into the Canadian ethos and no doubt etched in Downie's healthy mind too and yet, as they spoke, Downie confessed that memory, which he said used to be his forte, was failing: "I have Peter written on my hand, and I say that just to be upfront just because I might call you Doug." 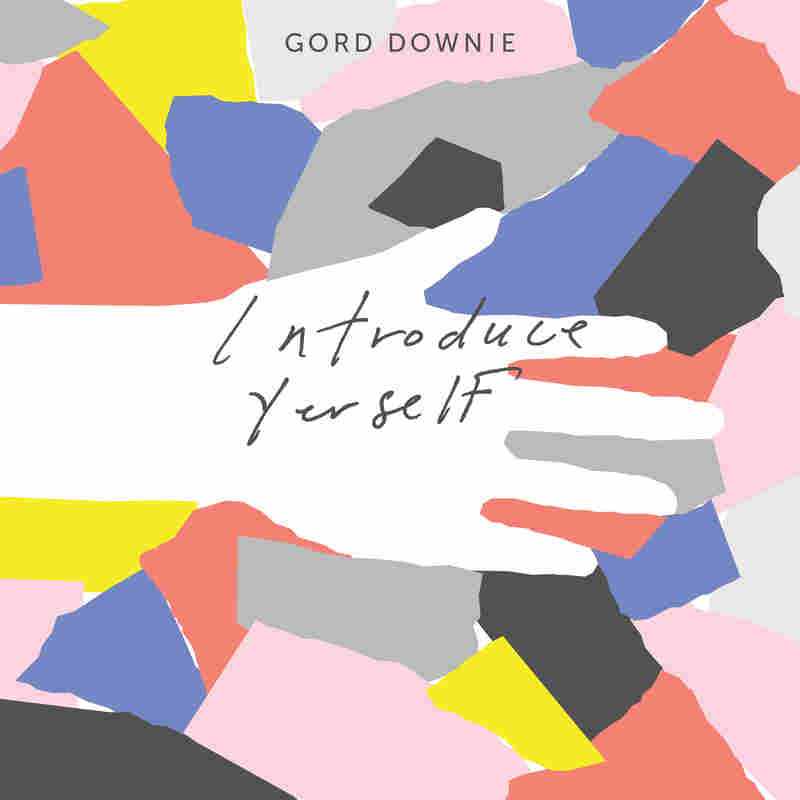 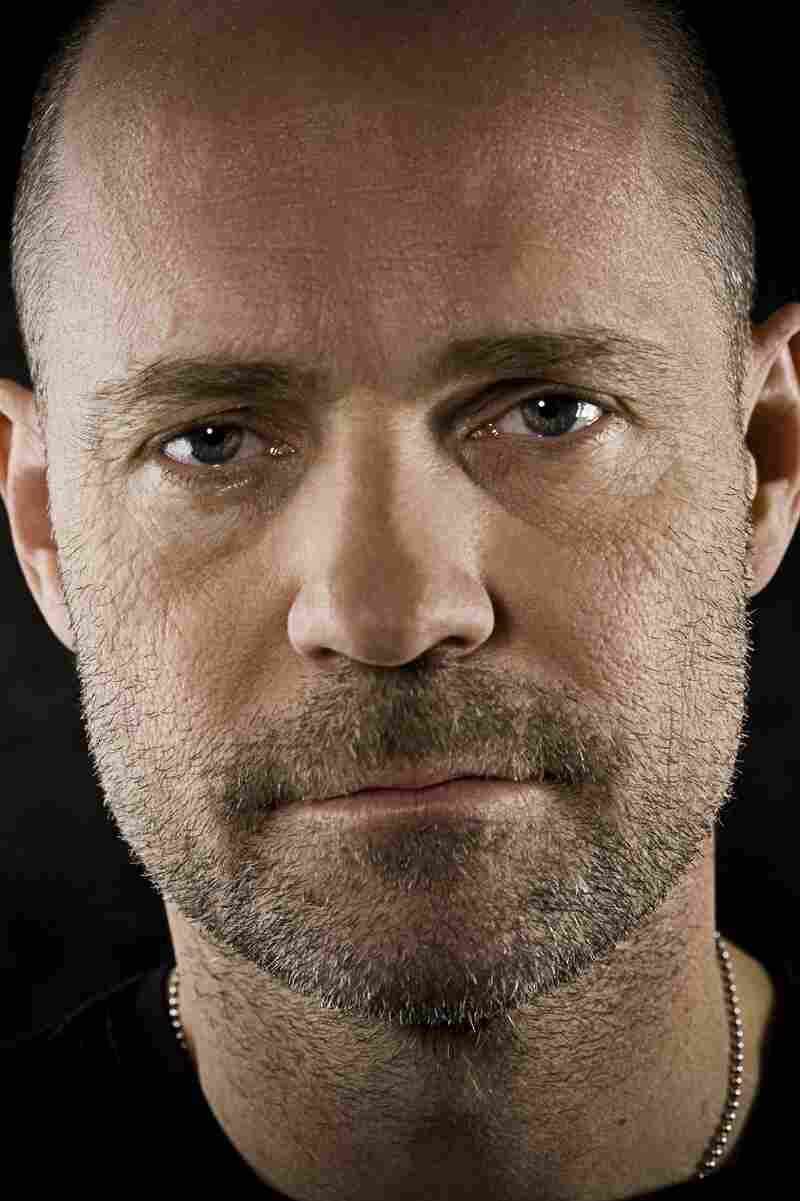 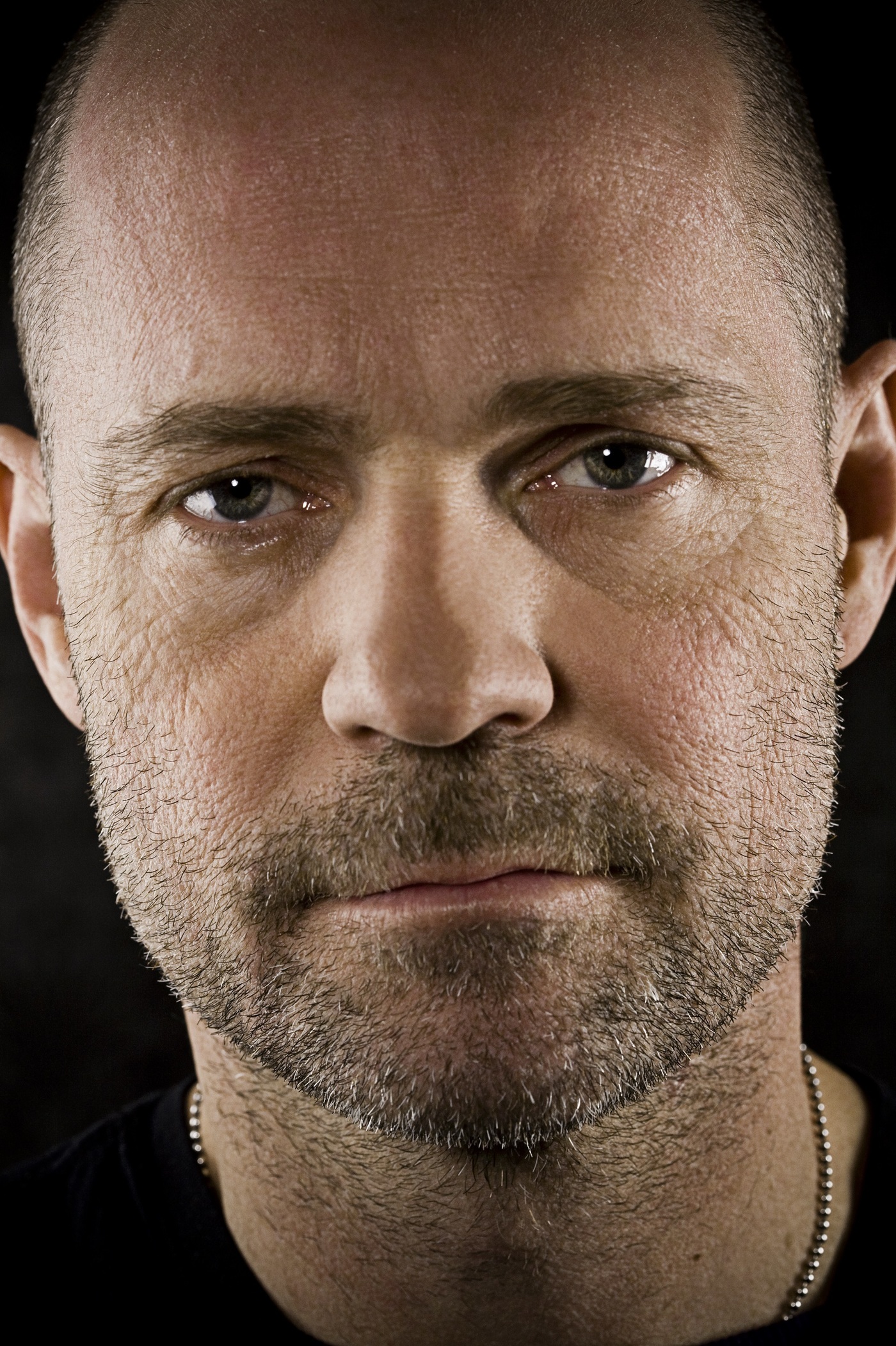 If you do not know anything of Gord Downie, except that he was the lead singer of one of Canada's most beloved bands, and that he died on October 17, you may marvel at how Introduce Yerself was at all possible to build, or why an artist who had already given fans the gift of enough cherished songs to last a lifetime would chose, in his last moments, to give more. If you know Gord Downie as a fan, you know this was a man for whom no act of art was impossible and whose gifts of generosity knew no bounds. If you know producer Kevin Drew (who also co-produced both Downie's previous solo record Secret Path and The Tragically Hip's last album Man Machine Poem alongside Dave Hamelin) as a fan, either of his solo work or as a co-founder of Broken Social Scene, you cannot be surprised that while processing his own grief, he was devoted to creating an artistic relic to help alleviate ours.

Part of the comfort and joy in listening to Introduce Yerself is the way Downie's voice is eternally preserved, in all its malleability and humanity. From his lowest notes on "The North" to his gentlest crooning on "Yer Ashore" to his absolutely gut-wrenching wail at the end of "Safe is Dead." If that sounds heavy, it is. But there is levity and humor too, and there is the sound of hockey. Gord Downie was a promising goalie before he was a rock star, and The Tragically Hip provided the soundtrack to many an NHL practice and small town backyard rink. The percussion on "You Me and the B's" (B's as in Boston Bruins) is the tap-scrape-slide of hockey sticks on a frozen driveway, as played by Gord, his brother Patrick Downie and longtime member of the Hip family Dave Koster.

Gord Downie treated hockey in his music (especially on the Hip's iconic song "Fifty Mission Cap" written about the mysterious disappearance of Toronto Maple Leaf Bill Barilko) as a portal to the human experience. On "You Me and the B's," Downie relays how "the Bruins really got the conversation going" between him and the song's subject, which eventually leads to the realization that "With constant concern I can't help her and I cannot help her end the trading of Joe Thornton," Whether or not you have ever heard of Joe Thornton, you can instantly relate to the moment where a conversation isn't really about the thing you're talking about (be it a hockey trade or anything else). In that way, Introduce Yerself is about Gord Downie and it is also about you. Downie's perfectly illustrated particulars set the pages of your own life's photo album flipping backwards in time. And Introduce Yerself becomes a Rorschach ride through the memories you might hold dear if you knew your transition to after-Earth was imminent. Directly from Downie, it's a gift of your own personal reflection on the connections that matter to you. And it's there to unwrap on every listen.

I have often thought of Gord Downie as Canada's moral compass, as a person who understands that each time you come close enough to another human being to exchange atoms, you have the capacity for connection and for change. Introduce Yerself is overflowing with evidence of a man who values meaning over fame, justice over pride and, as Downie sings on Introduce Yerself's most driving song, "Love Over Money." That song seems dedicated to his Tragically Hip bandmates, who he calls brothers. Downie reminisces about "missing many things trying to call a gig work," "playing for no one and no one plus one" and eventually concludes: "Love. That's how we got good." Anyone who witnessed The Tragically Hip in concert, whether at a tiny college campus bar or along with nearly 12 million people at their final performance as a band, knows this to be true.

The Tragically Hip were often referred to as "Canada's house band." One out of every three Canadians watched the broadcast of their final concert on the Man Machine Poem tour in August of 2016, and it felt like the entire pulse of the country was beating to the sound chanted inside the arena "Gordie. Gordie." The crowd burst into Canada's national anthem and passed a Canadian flag hand-to-hand before the band took the stage. Canada's Prime Minister Justin Trudeau was in attendance, in a jean jacket and a Tragically Hip t-shirt. And although many look to Downie as an emblem of Canada, he looked to Canada as an aspirational idea rather than a reality. In front of the biggest audience he would ever have, Downie spoke of indigenous people in the North: "It's going to take us 100 years to figure out what the hell went on up there, but it isn't cool and everybody knows that. It's really, really bad, but we're going to figure it out." He looked directly at Trudeau and continued: "You're going to figure it out."

Downie had long been an impassioned and vocal advocate for First Nations reconciliation. And during his last time on Earth, he seemed to only dig deeper into it. The final album he released while he was alive is 2016's Secret Path. It tells the real-life story of Chanie Wenjack, a 12-year-old First Nations boy who died in 1966 while trying to return to the family he was taken from after being placed in Canada's residential school system, a dark part of history which Chief Justice of Canada's Supreme Court Beverley McLachlin has called Canada's attempt to commit "cultural genocide" against aboriginal peoples. It seems Downie was unwilling to leave the Earth before telling Chanie Wenjack's story. His own story, as told through the 23 songs on Introduce Yerself, could wait.

In December of 2016, Gord Downie stood before 600 Canadian indigenous chiefs at the Assembly of First Nations and wept as he was introduced by a new name "Wicapi Omani." Loosely translated from Lakota, it means "He Who Walks Among the Stars." The name, along with a ceremonial eight-point star blanket and the honorable gift of an eagle father, were meant to officially welcome Downie as a brother into the community of First Nations. And in turn, Gord Downie reserved the final honor on Introduce Yerself for members of that community. After singing songs written for 22 others in his life, including Downie's family, friends, old loves, still loves and bandmates, Downie closes Introduce Yerself by calling out to his First Nations brothers on the Western side of James Bay: "Hello boys, way up in the North." He sings to them of the Canada that "we should have never called Canada" and shares the heartbreak of "a problem that is over one hundred years old" that has left "parents without kids without parents without kids..." Then Downie leaves his community with one final invitation: "Turn our faces to the sun and get whatever warmth there is." We hear a couple more breaths as the piano takes over. The way the notes dance, they sound just like you're looking out at a white sheet of snow that goes on forever and it's so bright you have to squint until all you can see is light.