Accessibility links
Review: On 'Reputation,' The Old Taylor Swift's Not Dead : The Record On her new album, Reputation, Taylor Swift continues to chronicle the links between romance, revenge and her own personal sense of justice, but also confronts how she may be trapped by her own image. 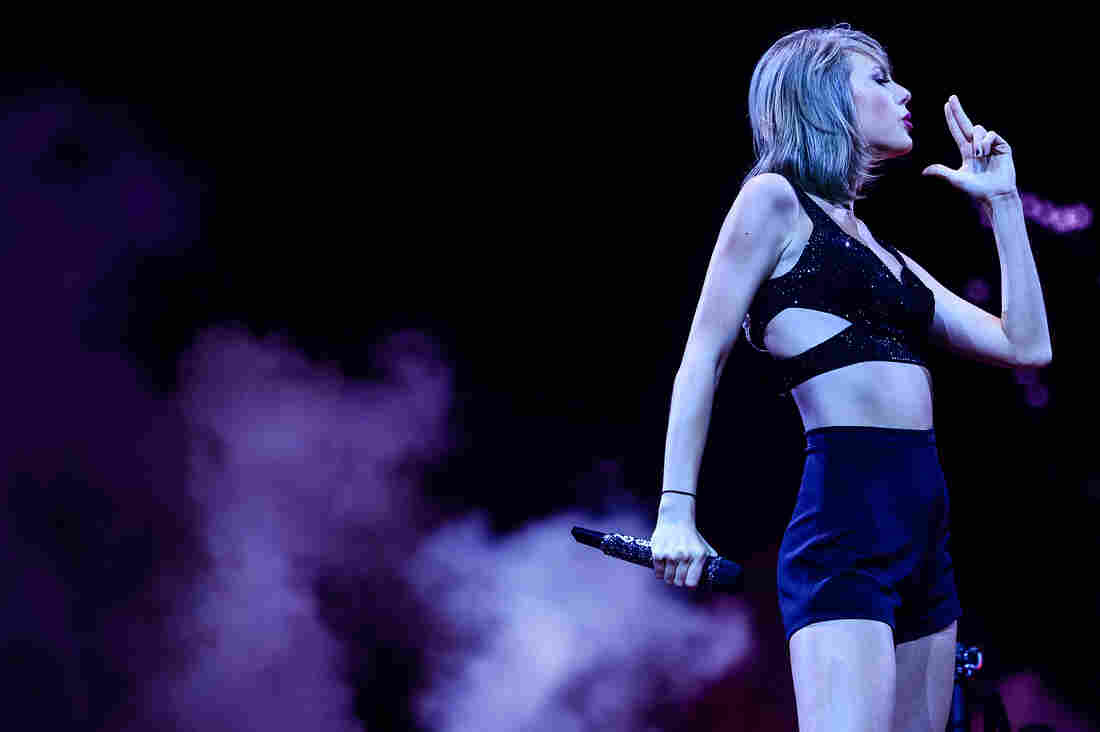 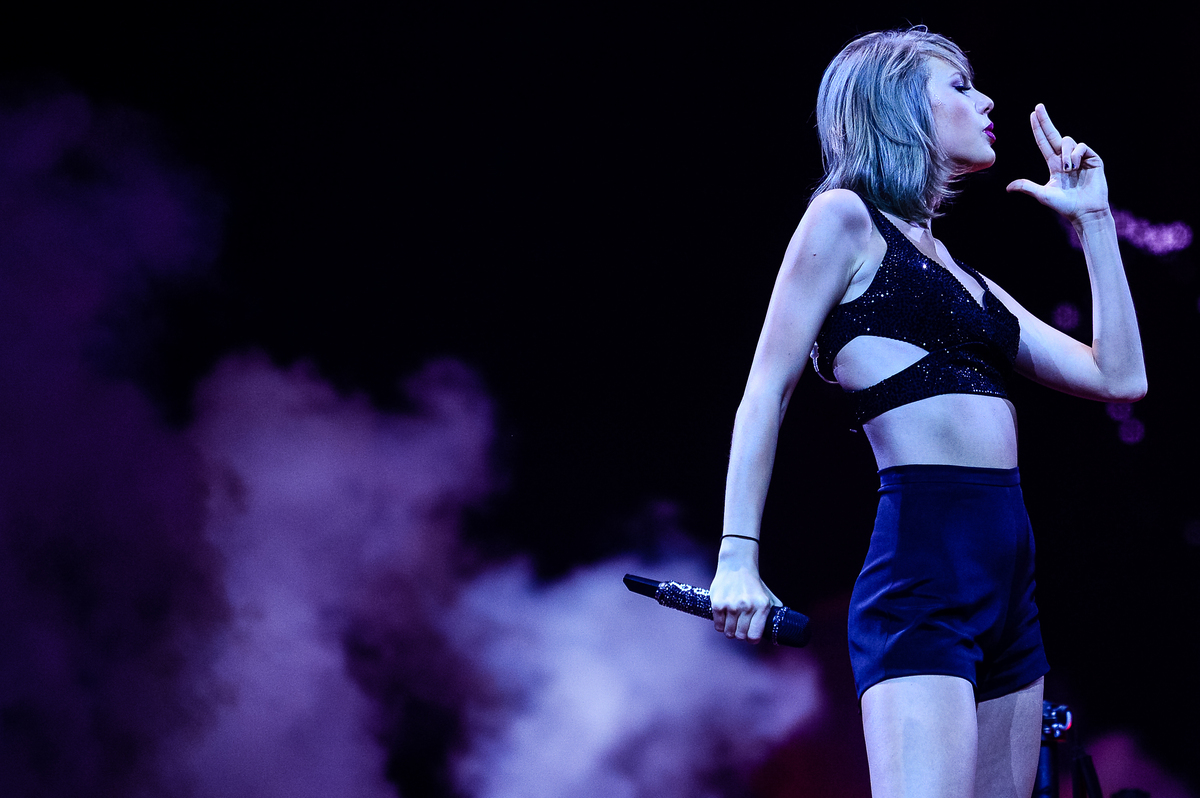 Taylor Swift on stage in 2015. Her sixth album, Reputation, is out Friday, November 10.

Since she was 16, when her first hit, "Tim McGraw," explored how a girl's pop-star crush could enhance a high school romance with a boy not quite up to the task, Taylor Swift has been tracing the way her generation thinks, talks and texts about love. She's particularly gifted at connecting what young women consume with the ways in which they build their relationships. Over the 11 years of her stardom, Swift has documented and encouraged the millennial journey from Disney to YouTube, making poignant, personal and relatable music steeped in her peers' fashion choices, modes of gossip, dating habits and dreams of a comfortable middle-class life. "Delicate," one of the most memorable tracks on her just-released sixth album Reputation, exemplifies this. Swift meets a brand new lover in a downtown New York bar; she notices approvingly that he's wearing Nikes. It seems like a banal detail, until you realize that the mere mention of that familiar manufacturer has conjured an array of associations that shapes the meaning of the song. For each listener, the shape is a little different. The new boyfriend's basic. Or he's a jock. Or he's just cool enough to buy reputable shoes, but not so full of himself to be tricked out in the latest thing. In 21st-century America, "Nikes" is as evocative a word as "heartache" or "promise." Swift understands the heart that beats beneath the brand name. 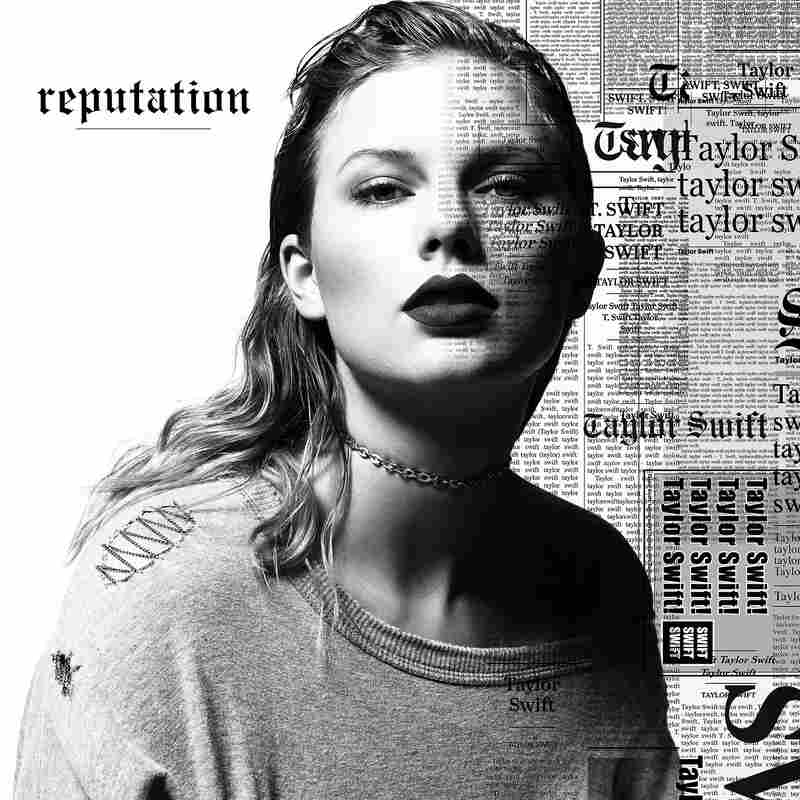 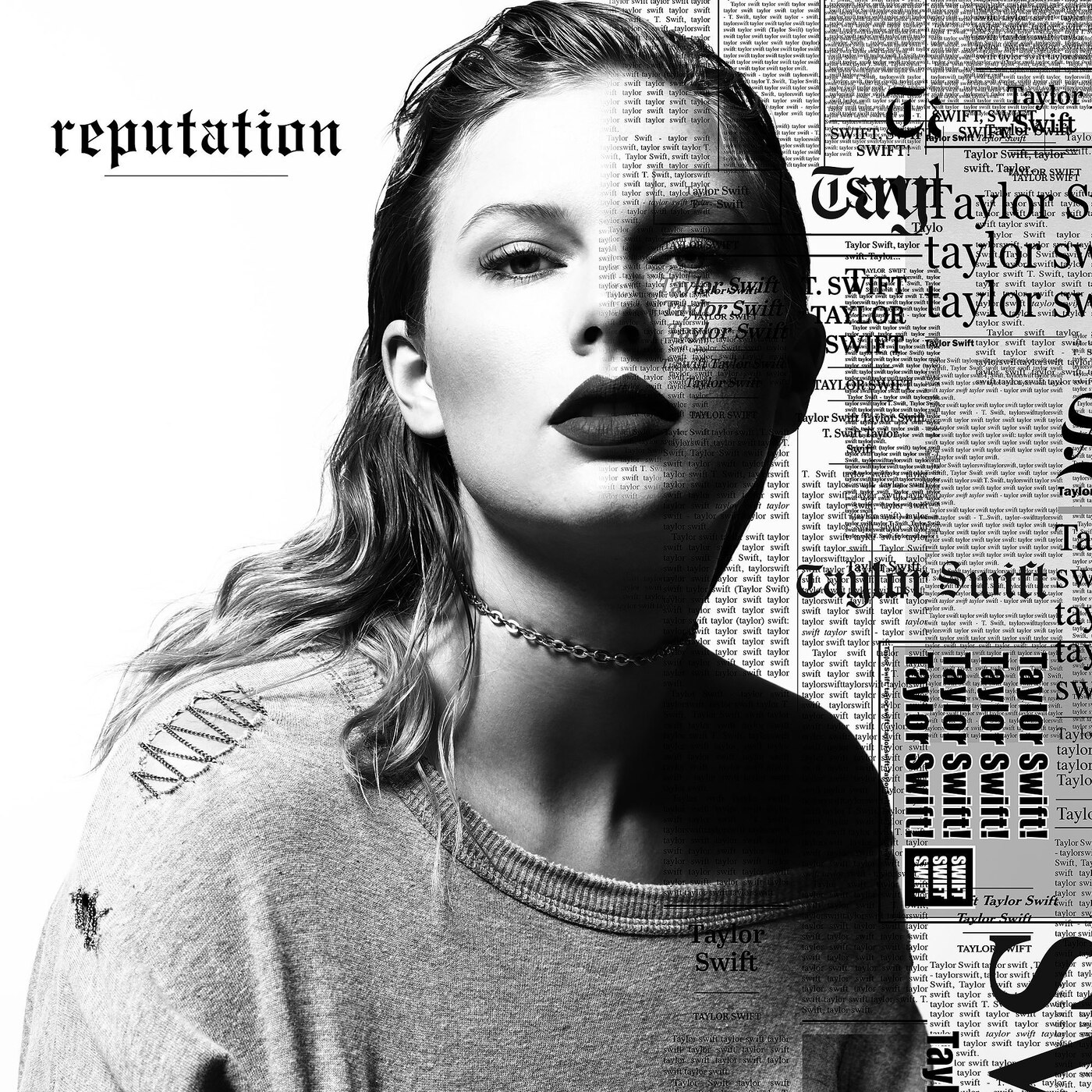 This is what pop stars do, of course: They help people talk about a love while also motivating them to buy things. What makes Swift remarkable is her care with detail and her ability to grasp the ambiguities of the everyday. She's not inspirational in the same way stars with titanic voices, like Adele or Beyoncé, can be. When, in her songs, she exhorts a lover or reassures a friend, it's slangy, conversational: Shake it off. I knew you were trouble. You're so gorgeous! A master of the vernacular in her lyrics, on her recent albums Swift pioneered a new vocal approach that absorbs hip-hop's cadences without overtly appropriating its vocabulary. Grounded in a rush of syllables that might be sung, spoken or fall somewhere in between, the Swift style is neither showy nor ponderous. It feels real, like gossip, or a lover's spat, or the self-talk that fill an anxious person's head. Expressing how love can be frustrating and humiliating even as it offers hope and stokes desire, Swift preserved her country-trained knack for storytelling and made it more complex, uncovering how rhythmic and other sonic elements can take songs even deeper into the woods of an unfolding emotional experience.

In one significant way, however, Swift lagged behind most of the divas who battled her for pop supremacy: She didn't write comfortably about sexual experience or even desire. She had a reason for this. "When you talk about virginity and sex publicly, people just picture you naked, and as much as I can prevent people picturing me naked, I'm going to," she told a reporter in 2009, just as she left her teenage years. Perhaps reflecting the reasonable fear that once a woman starts talking about sex, many people can't hear her say anything else, Swift has worked very hard to maintain control over the public perception of her body and what she does with it. She dances awkwardly, not provocatively. Her clothes reveal her body in the matter of classic Hollywood: long legs, high collars, and, until she turned 25, no belly button. She also spoke up about men's attempts to physically violate her: Earlier this year, Swift briefly became a heroine in the intense battle women are currently waging to expose sexual harassment when she won a lawsuit stemming from a 2013 incident in which she was groped by a Denver radio host.

As Swift worked to maintain her version of modesty while developing a more mature and provocative persona, she also had a string of very public relationships with actors, musicians and other sought-after men. In her music, Swift built a code to acknowledge that she and her many famous boyfriends were at least occasionally intimate: clothes thrown on bedroom floors, hands running through hair, intimate encounters "in my room." (Wouldn't a multimillionaire have more than a room?) The code, frankly, got a little stifling, even as Swift's musical explorations became more expansive. Reputation is her attempt to crack it. She's also trying to figure out how to frankly express her own erotic desire, and to confront how the good girl image she worked so hard to maintain for so long has finally entrapped her.

To accomplish this, Swift makes a choice that will undoubtedly be controversial: She openly appropriates, adapts and occasionally subverts the African-American cadences that, until now, she has generally only glanced against. She does so with a lighter touch than most. Reputation is blessedly free of the melismatic wailing Swift attempted on "I Don't Wanna Live Forever," her recent collaboration with Zayn Malik, and when she speaks, she still does so in her patented Taylor voice: that innovative banter that has always nodded toward rap without actually mimicking it. Yet the direct invocations of black pop on Reputation are many and obvious.

The chorus of "King of My Heart" has Swift's voice processed through what sounds like a vocoder or Prismizer, synthesizer effects often used by rappers and R&B artists. "Dress" seems to be an homage to R. Kelly's influential 2002 single "Ignition (Remix)," its verses bumping along in sync with that song's beat. The Rihanna-style lilt to the verses of "Ready For It," one of Reputation's four pre-release singles, surfaces again on "So It Goes...," in which Swift even nods to Bad Gal Riri's Instagram handle with the line, "I'm not a bad girl but I do bad things with you." In "Delicate," Swift blows up her phone with phrases like "where you at" and "Is it chill" to a singsong rhythm reminiscent of Fetty Wap's "Trap Queen." Future, one of trap's luminaries, guests on the sports metaphor-laden "End Game" alongside a rapping Ed Sheeran.

Swift has shown her affection for hip-hop in the past, covering Eminem's "Lose Yourself," collaborating with Kendrick Lamar and inviting numerous rap hitmakers on the victory laps she took during her last tour. "Maybe I'll just start rapping or DJing," she told MTV VJ Sway in 2012, "I love rap so much." Swift loves rap as much, in fact, as much as most white millennials do: Her consumption of it is as natural and sincere as her recognition of the power of brand names. Rap has also provided Swift with an important songwriting tool: its central principle of "flow," which gives her a better way to capture thoughts and emotions unfurling with thrilling speed. (Young country stars like Sam Hunt and Maren Morris have uncovered the same thing.)

But the fact that, on Reputation, Swift goes deeper into urban sounds, specifically to talk about sex, raises questions that have haunted American music from the beginning. This album comes on the heels of a particularly nasty phase of Swift's ongoing feud with the rapper Kanye West, which has become a vector for incendiary public discussion about white privilege, sexism and artistic freedom. The timeline of that conflict is easy to discover. Swift openly refers to it on Reputation, sometimes casting blame, sometimes taking it herself. What some might not have expected is that Swift would actually make music that comes closer to West's own eclectic sonic experiments than she ever has before. With the help of the producers Max Martin and Shellback and Jack Antonoff (among whom this long album's 15 tracks are fairly evenly divided), Swift has created her answer to West's classic My Beautiful Dark Twisted Fantasy, another album which also grapples with self-doubt and the negative effects of fame.

Is it her right to do so? Some will say no. Too often, African-American music has been treated as delicious forbidden fruit that white performers have plucked to become more sensual. From Mae West in the 1920s to Miley Cyrus in the 2010s, white women performers especially have slipped into something dangerously close to blackface when they long to publicly loosen up. Swift does not go that far on Reputation — it's no Bangerz — but she has stepped over a previously self-imposed line. The album's more relaxed attitude about sex is a good thing: On songs like "So It Goes...," which has Swift singing about leaving scratches on her lover's back, or "Dress," with its hook, "I bought this dress so you could take it off," Swift sounds freer and more truly happy than ever before. But it's curious that the breakthrough she needed to make on a psychic level coincides with her fulfilling, in whatever limited way, her earlier promise to just start rapping.

There are tracks on Reputation that don't seem directly connected to hip-hop, instead returning to the borderless, EDM-kissed sound that Swift successfully tapped with these same producers on her last album, 1989. Some seem like musical dialogues with Lorde, Swift's protégé-turned-peer, who already claimed a pop crown this summer with her sophisticated, Antonoff-produced second album Melodrama. Others address Swift's public life instead of her private one, invoking her feuds with fellow celebrities, her time as tabloid fodder and the way fame has endangered her relationships. These songs are where Swift now seems to best channel her brilliant awareness of ambivalence and ambiguity. She's sold on love and sex right now; she still has doubts about herself, and that's where things get interesting.

One of the best of these songs is "Getaway Car," a simple ballad with a familiar theme that still manages to be subtle and affecting. Swift is recalling a romance that came between true loves — a fantasy that both participating liars took on as truth for a little while. Within a light-handed, synthesizer-lifted arrangement by Antonoff, Swift lays out her metaphor as carefully as a thief might devise an escape plan. This is not a fairy tale; it's just one chapter in an unresolved story, tinged with regret, but also compassion. "Getaway Car" isn't a leap for Swift; it's a sure-footed step forward into the vagaries of grown up life.