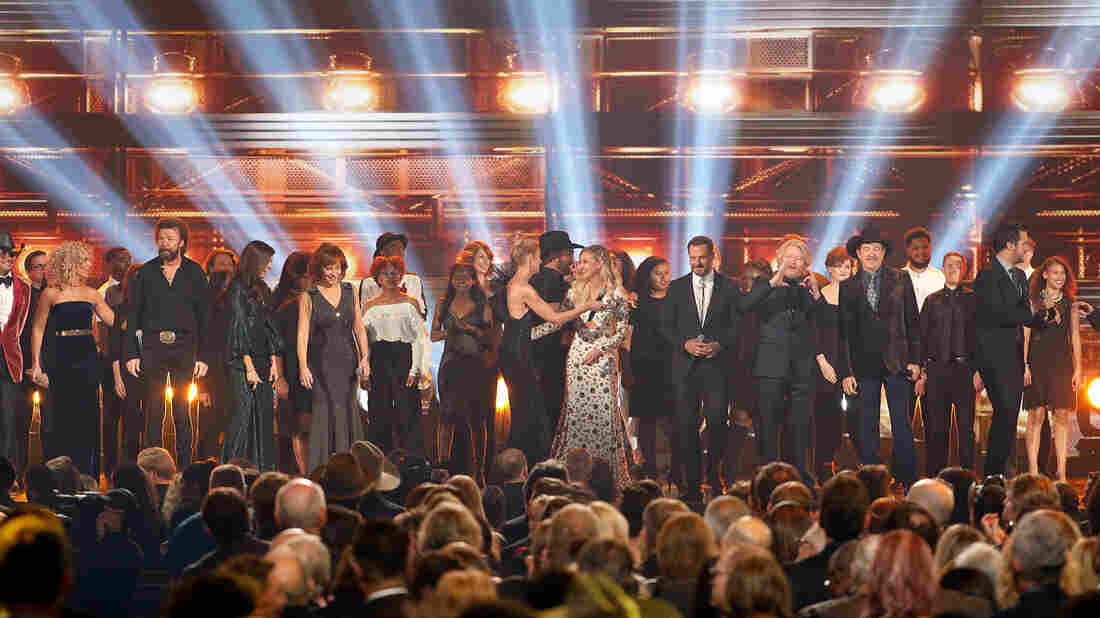 The opening performance at the 51st annual CMA Awards at the Bridgestone Arena on November 8, 2017 in Nashville, Tennessee. Taylor Hill/FilmMagic/Getty Images hide caption 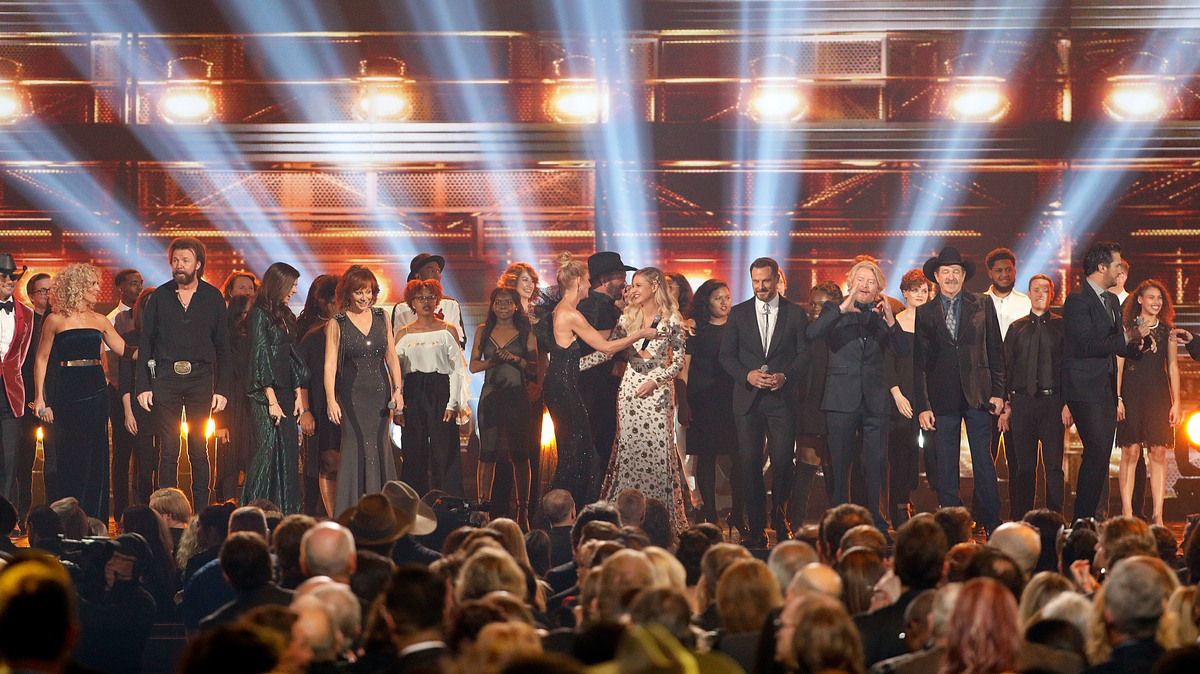 The opening performance at the 51st annual CMA Awards at the Bridgestone Arena on November 8, 2017 in Nashville, Tennessee.

For decades now, country's aesthetic and ideological sensibilities have been shaped as much by the music's modern, middle-class suburban appeal as its rural working-class roots, which can make for quite the rhetorical push-and-pull (likely one of many factors that contributed to the Dixie Chicks' famed expulsion from the format over voicing distaste for the second President Bush during a U.K. concert). Working-class political speech hasn't always been recognized as political at all; it's just as likely to be dismissed as class resentment. As Nadine Hubbs wrote in Rednecks, Queers and Country Music, it's expressed "not in the language of politics or activism, but in the stories of ordinary individual lives, and with an emphasis on feeling." (She would argue that claiming the enlightened, politically correct moral high ground has been more of a middle-class luxury.) In Out In the Country: Youth, Media and Queer Visibility in Rural America, Mary Gray likewise notes that advocating, organizing and changing minds in small, working-class communities requires leaning on familiarity and communal belonging.

The tension between projecting respectability and emphasizing commonality subtly shaped Wednesday night's CMA Awards show, which kicked off with a chipper display of togetherness, Darius Rucker leading a slew of fellow country stars in "Hold My Hand," the feel-good, southern-fried pop-rock hit from his Hootie and the Blowfish days. Co-hosts Brad Paisley and Carrie Underwood then began their co-authored opening monologue on a somber note, reeling off a list of recent tragedies. "Tonight," Underwood vowed, "we're gonna do what families do: come together, pray together, cry together, and sing together too," the first of many times that artists on stage would invoke the familial.

When Paisley donned a t-shirt emblazoned with "Unity" in block letters, when Underwood and Garth Brooks spoke of the show as a gathering of family and when Lambert and Little Big Town's Karen Fairchild expressed the same sentiment in different words, they affirmed that, in the moment, participating in community took precedent over asserting individuality. Paisley has as much practice as any of his peers at trying to convey to the country audience and industry that he balances reverence for tradition with optimism about social progress. "Heaven South," the song he performed in his "Unity" tee that night, with an assist from rising star Kane Brown, is one of many in his catalog aimed at making sure that he doesn't leave behind those who may feel their idyllic ways of life are threatened by social change.

Midway through their monologue, Underwood and Paisley pivoted to coy, tension-diffusing humor, gently roasting the CMA's attempt to make the show a "politics-free zone." (Paisley, Maren Morris and Cam were among the artists who took to social media to voice respectful criticism of the CMA's restrictive media guidelines.) Underwood and Paisley played it like they were pushing the envelope, inserting current political players into classic country songs — "Harper Valley DNC," "Hold Me Closer, Bernie Sanders," "Stand By Your Manafort" and "Way Down Yonder on the Scaramucci" — and ended the segment by satirizing President Trump's reckless Twitter habits with "Before He Tweets," the sort of thing that could either be taken as topical comedy or a congenially understated political dig.

The one gesture that came off as direct political engagement during Wednesday night's CMA Awards happened outside of the venue, deliberately beyond the boundaries of the country music community. On the sidewalk in front of Nashville's Bridgestone Arena, Sturgill Simpson, the intellectually restless album-maker and mischievous contrarian, staked out a spot to busk and hold court, flanked by hand-written signs: "I don't take requests, but I take questions about anything you want to talk about because fascism sucks," and, "Struggling country singer. Anything helps (all donations go to the ACLU). God Bless America."

By making a show of inviting pointed dialogue, he flaunted the contrast between his unconstrained persona and the CMA's prohibition on interview questions about the massacre at the Route 91 Harvest country music festival in Las Vegas, gun control and politics in general. The policy was ultimately retracted last week, all-but guaranteeing that the handling of those very topics would receive heightened attention. Much media coverage of what unfolded inside the building took artists' seemingly softened responses to distressing recent events at face value, but chalking the tone of the night up to enforced politeness is too simple.

A new song that Keith Urban performed later in the show, "Female," had been billed as a response to the tsunami of sexual assault and harassment allegations that have become public in the last month. The beat-driven ballad was a gently aggrieved and obviously well-intentioned, yet somewhat hazy, reflection on sexist perceptions of women as subordinates and temptresses, whose free-association-style lyrics flickered across the screens behind him.

Urban's new tune aligned with the tone of much social and political discourse in the country music mainstream this decade. The general rule has been to tread softly, speak diplomatically and lead with empathy. (In that climate, attempts at addressing the polarizing topic of guns in a way that feels personal and draws on cultural affinities, like this piece does, are more likely to be received.)

A number of stars who took their turns on stage — Little Big Town, Eric Church, Tim McGraw, Miranda Lambert, and Garth Brooks — have released songs encouraging kindness and live-and-let-live tolerance in low-key terms. And the music video that won a non-televised award, Brothers Osborne's "It Ain't My Fault," contains its own artfully coded political language. The clip depicts a robbery caper in which thieves sport the masks of American presidents and candidates, and the only one of the bunch that fails to escape the cops is dressed as President Trump, which couldn't have been an arbitrary narrative decision.

The CMA Awards show almost always saves a little time for remembering the past, an essential practice for maintaining the connection between current hit-makers and the genre's evolving sense of lineage. Alan Jackson, whose elder statesman status was formalized with his induction into the Country Music Hall of Fame this year, had the chance to perform two songs, the second of which, "Don't Rock the Jukebox", is a fairly rollicking honky-tonk number that underscores the salving quality of country sentimentality. (The guy is, after all, the author of one of country's most memorable, plainspoken acknowledgements of national grief.) "Don't rock the jukebox; I wanna hear some Jones," Jackson's pleaded. "My heart ain't ready for the Rolling Stones / I don't feel like rockin' since my baby's gone / So don't rock the jukebox; play me a country song."

Some of the most reverential performances paid tribute to deceased country heroes Don Williams, Glen Campbell and Troy Gentry, of the duo Montgomery Gentry, cameras panning to the latter two singers' tearful widows and children. But the pinnacle of mourning was an "In Memoriam" slideshow accompanied by Underwood's rendition of "Softly and Tenderly." A powerfully sentimental old hymn about looking toward the comfort of heaven that's closely associated with generations of country performers, from Hank Williams to Willie Nelson, Merle Haggard and Reba McEntire, Underwood gave it a grand, Broadway-style treatment as images of pickers, songwriters, producers, managers and executives who've passed in the last year scrolled by. Finally, the screen filled with the names and faces of the fans gunned down in Vegas, and Underwood gulped back a line she was too choked-up to deliver, reminding us that country's music most potent response to difficult times is, often, an emotional one.