Accessibility links
Within A Conflicted Present, The Sounds Of 'New Detroit' Mine Its Past : The Record New music from the city looks to the past for ways forward — but the patina of artistic fertility around "New Detroit" isn't all-inclusive.

Within A Conflicted Present, The Sounds Of 'New Detroit' Mine Its Past

Within A Conflicted Present, The Sounds Of 'New Detroit' Mine Its Past 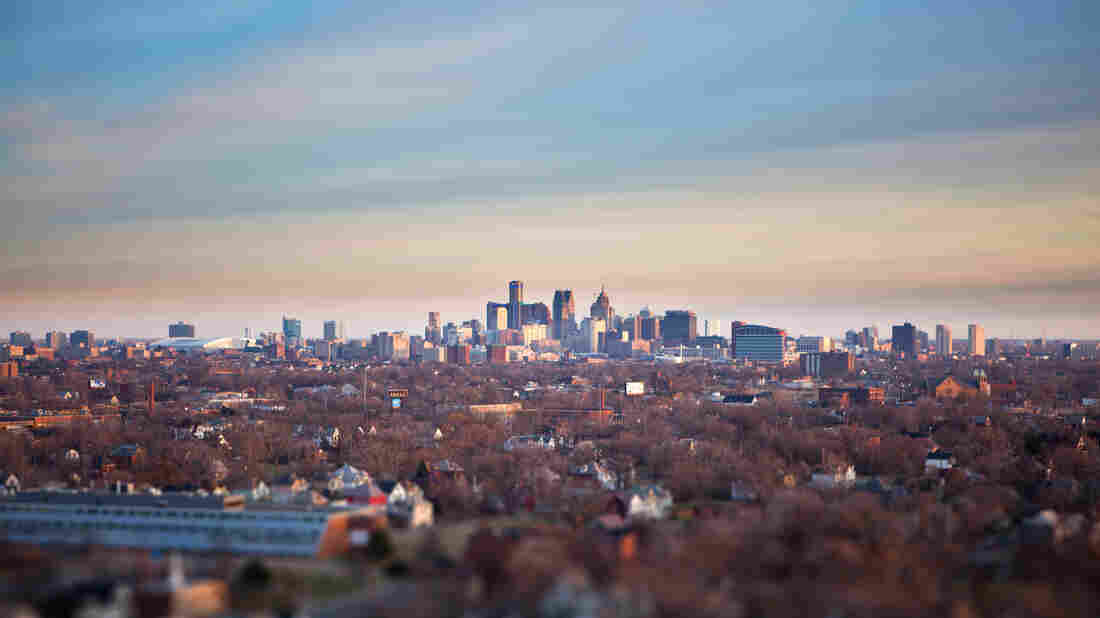 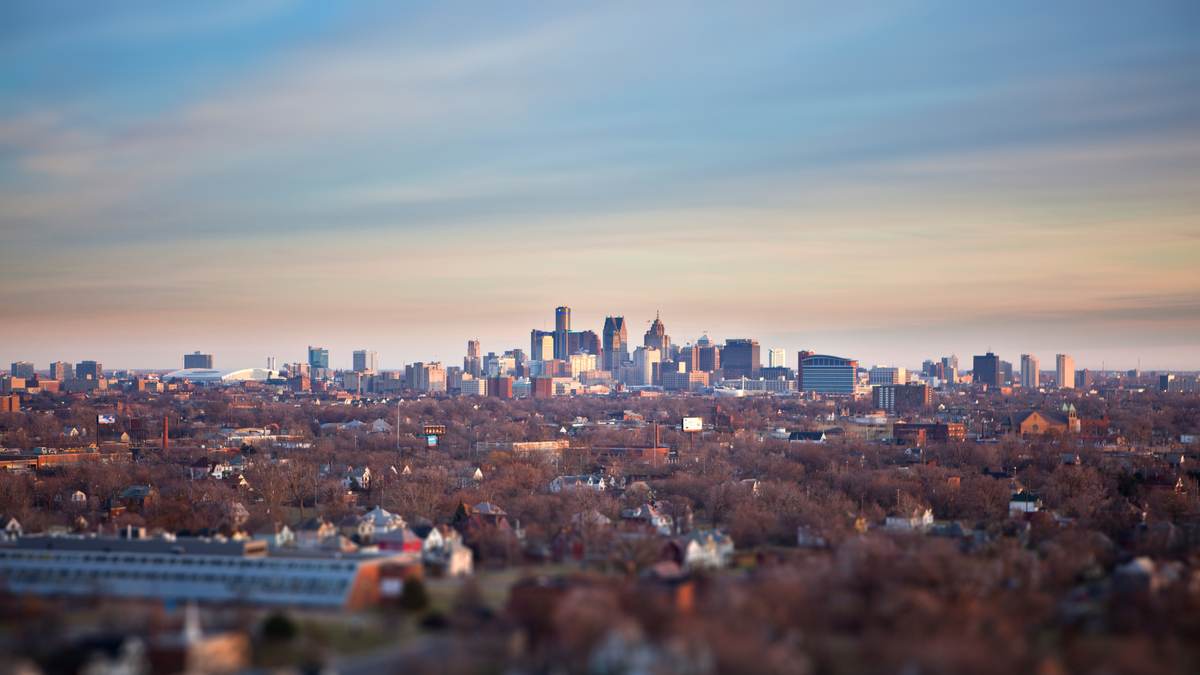 Detroit is having a moment.

Just four years ago, it earned the distinction of being the largest American municipality in history to declare bankruptcy, prompting the media to report that stately homes could be purchased in abandoned neighborhoods for as little as one dollar.

Today, the city is enjoying a complex rebound, the result of a litany of forces coalescing in and around it; tireless local activists and organizers, big-money corporations and adventurous investors. While new businesses and communities are sprouting in revitalized areas, there are still many that see it all as a shrewd gentrification play — where cost-of-living can be increased, money is up for grabs by the fistful — that can be summed up in what's become a popular, controversial term: New Detroit.

"Perhaps I'm hypersensitive to it because I'm not from here, but when people describe the city as a whole-new Detroit, it diminishes the hard work and the impact of individuals, families and companies that have been living and working here forever," explains Sandy K. Baruah over the phone to NPR Music. Baruah is the president and CEO of the Detroit Regional Chamber, which represents both locally grown and out-of-state business interests in the city. He says that the real advancements have been far more basic and essential.

"It's a phenomenal rejuvenation story, and we've made an awful lot of progress, but it hasn't touched everyone yet. Still, now the street lights are on, the busses are running on time, garbage is being picked up." But, he says, "in terms of job opportunities, level of education attainment, those numbers haven't magically increased. That's why I never use the term 'New Detroit.'"

This complicated, economic evolution has had a strong and distinct influence on the city's art, easily located within the sounds coming from it. To wit: "Detroit Part II," from the album The New Monday by producer and multi-instrumentalist Shigeto, who returned to Michigan after a period spent living in Brooklyn. The song could be taken as a historic tour through the city's vast and influential techno and house music underground; pillowy kick drum, floating Rhodes piano chords, jazzy sax melodies, disembodied and manipulated spoken word vocals fading in and out the mix, distilling Detroit's prominent music-making legends, including J Dilla, Moodymann and Theo Parrish while stepping foot into a legacy all its own.

"This new album in general represents a lot, but in a large way it represents what I take from and love about Michigan music," explains Shigeto, born Zach Saginaw. "Be it dance music, or jazz, or rap or soul or whatever. Being back here has really fed me, in the way I look at and digest music. It's affected everything, and it was a long, slow build to that." The New Monday is a joyful pastiche of Detroit's present independent art scene, reflecting the producer aggressively pushing beyond his comfort zone into new territories and inspired collaborations.

Saginaw is part of an emerging community of kindred local artists who might not share similar sounds, but are all working towards a common goal: maintaining Detroit traditions while forging new ones. 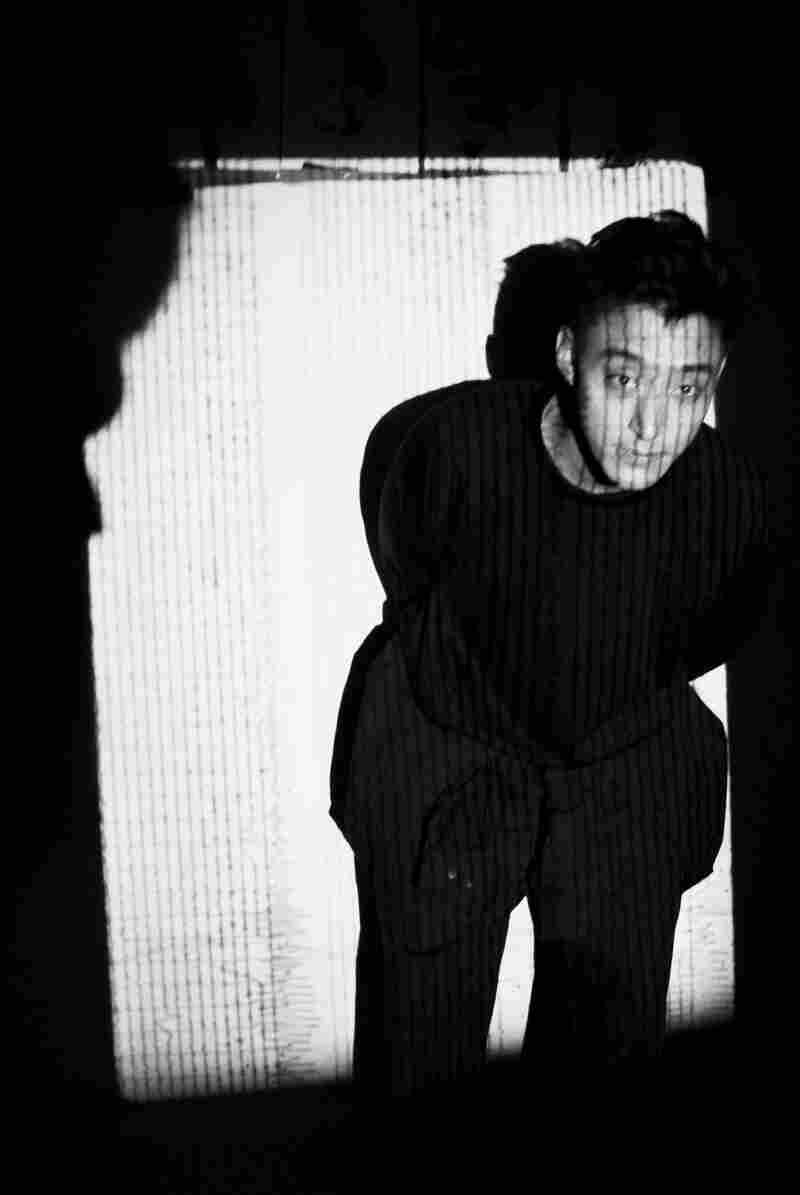 Post-punk outfit Protomartyr is a prominent part of that community, currently touring behind the quartet's recently released fourth full-length, Relatives in Descent, a document of post-modern anxiety, guilt and belonging writ in rumbling post-punk, the sound of concrete coagulating outside of a Whole Foods.

"People seem to already have their narrative on the city, and they just insert us into it how they see fit," deadpans Protomartyr guitarist, Greg Ahee. "There are so many very skewed opinions about being a Detroit band that are often just accepted as fact.

"We're psyched that people want to move here, but you have to respect what already exists here. There are way too many people coming to town with this white savior complex. There are people who look at Dan Gilbert as magnanimous, and he's not," Ahee says, referring to the Quicken Loans mogul and Cleveland Cavaliers owner Dan Gilbert, who's set up shop across large swaths of Detroit with myriad investments. "He saw an opportunity and put a s***load of money into it. He didn't come to help the city. It's just business."

Native son Jack White is another to establish a considerable footprint for his Third Man brand, launching a record pressing plant and retail storefront and performance space. It's a homecoming for White, after initially launching the first physical incarnation of the company in his adopted home of Nashville back in 2009. The sparkling location is a destination point in the reenergized Cass Corridor, a once-dicey area that's now tony enough to have earned a new moniker, Midtown. (It's one that White and Third Man have officially rejected.)

"We're less than a mile from where the White Stripes got their start. That's all in this area," explains Roe Peterhans, who oversees the city's Third Man location. Peterhans was referencing the now-defunct Gold Dollar Bar, a space semi-legendary for having hosted the White Stripes' earliest shows. (The band's final performance at the Gold Dollar, in 2001, is part of a recent compilation of White Stripes live material.)

"There was development, and things were happening in the Cass Corridor, and there was a serendipitous meeting of a couple people, including Jack White and the people who started [well-heeled, upmarket Detroit watch company] Shinola, and some property came available," Peterhans explains of Third Man putting down stakes in its founder's home town. "It all kind of lined up with the fact that the neighborhood is where myself, Jack and a lot of the other folks who are a part of Third Man and friends of ours got our start in art, music, or some other creative outlet. It all just sort of lined up at the right time."

Closing the loop, Third Man's label is also home to ZGTO, a project between Shigeto and Detroit rapper ZelooperZ, a part of hometown hero Danny Brown's crew Bruiser Brigade and a collaborator on The New Monday. ZelooperZ is also a Third Man employee, running the front of house audio for live music at the Cass Corridor performance venue.

Described by Saginaw as "a representation of what two brothers from completely different environment can give each other," ZGTO personifies the label's dedication to supporting local artists, regardless of genre."

The end result is A Piece of the Geto, a collection of surreal and atmospheric hip-hop released as a split between Third Man — which handles the physical product — and renowned Ann Arbor label Ghostly International, an hour from Detroit, taking care of the streaming and digital end.

"Zach is from Ann Arbor, as is Ghostly. ZelooperZ is from Detroit, as are we," Third Man's Peterhans says of the collaborative nature of the release. "We've got the record pressing plant. It was a great way to merge the two sensibilities."

While all of this activity reflects Detroit's ongoing sonic revitalization, the issue of longtime residents disconnected from this cultural cloudburst, simply looking to fit into the city's evolving landscape, still remains. For the deluge of boutiques and coffeeshops, the burgeoning art scene, there remains a disconnect between longtime residents and the new wave. Some of it is social, some of it economic. The end result leaves many unsatisfied with the ground shift beneath them.

"Gentrification is happening here, it's going to continue to happen, and I'm a part of it just as much as anyone else," Protomartyr's Ahee says. "It's not heading in the right direction, but it doesn't have to be like New York, where everyone that has lived there for generations has to move because they get priced out. There's so much space here that's not being utilized. I just wish one of these billionaires would go to an area where they don't have to displace a bunch of people. But that's not how they do business. They go to an area where people already live and they buy them out or kick them out. It's s****y to see that. There's enough room here for everybody."

It's a sentiment that Baruah, of the Detroit Regional Chamber, doesn't take lightly. He acknowledges that, despite media hype or actual advancements, the city is still very much, of course, a work-in-progress.

"It's better, but we still have a long way to go for a lot of Detroiters and Detroit communities, and I really want to stress that," he says. "Obviously all of the good things that are happening, all these tech companies that are moving in, all of that is good for the tax base. The more we can pull in from our tax base, the more we can address social issues. But I don't want to give the impression that everything that's happened has been good for everybody. There are still people out there whose lives have not changed all that much. No one is declaring victory just because downtown and the University District are doing great. Our focus now is on the neighborhoods."

Shigeto has broadened his own endeavors beyond making music into becoming a business owner, launching the Portage Garage Sounds label with his brother, Ben. The space is located in the small city of Hamtramck, which is actually inside of Detroit, surrounded by it on almost all sides.

"It's about being here, working on our project but also creating an environment that hopefully make life more sustainable for us and the people we care about," Saginaw says of the fledgling imprint. He hopes it can be utilized by like-minded locals looking for a place to showcase their own art.

"The studio is inside an old Mobil gas station that was then turned into an actual auto garage, called the Portage Garage," he says. 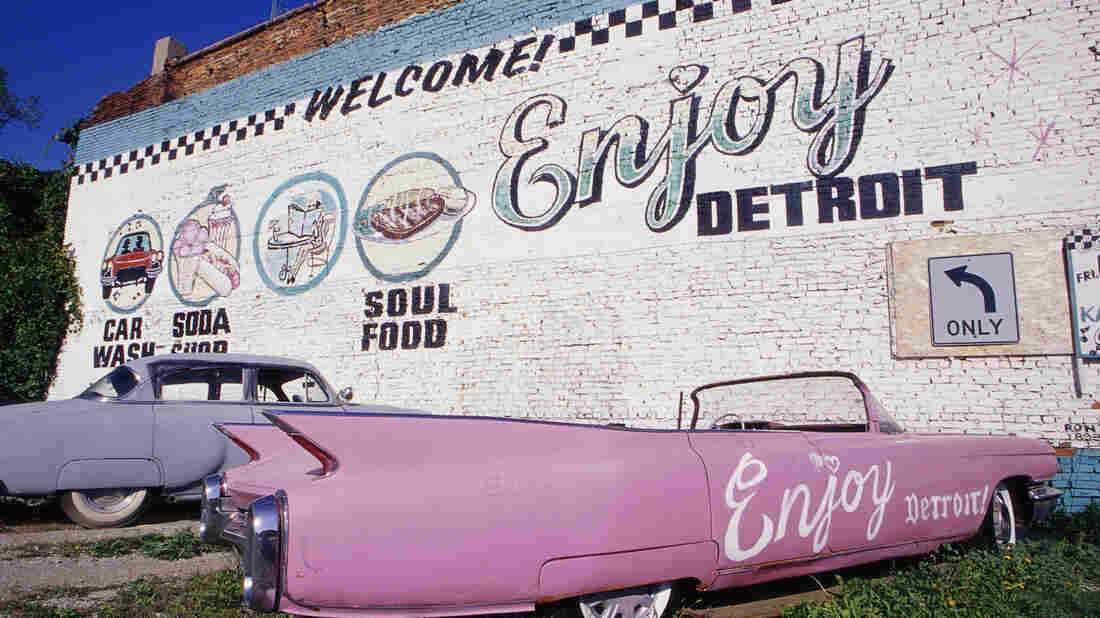 A mural outside of the Car Wash Cafe on Meldrum Street in Detroit, Michigan. Richard Cummins/Getty Images hide caption 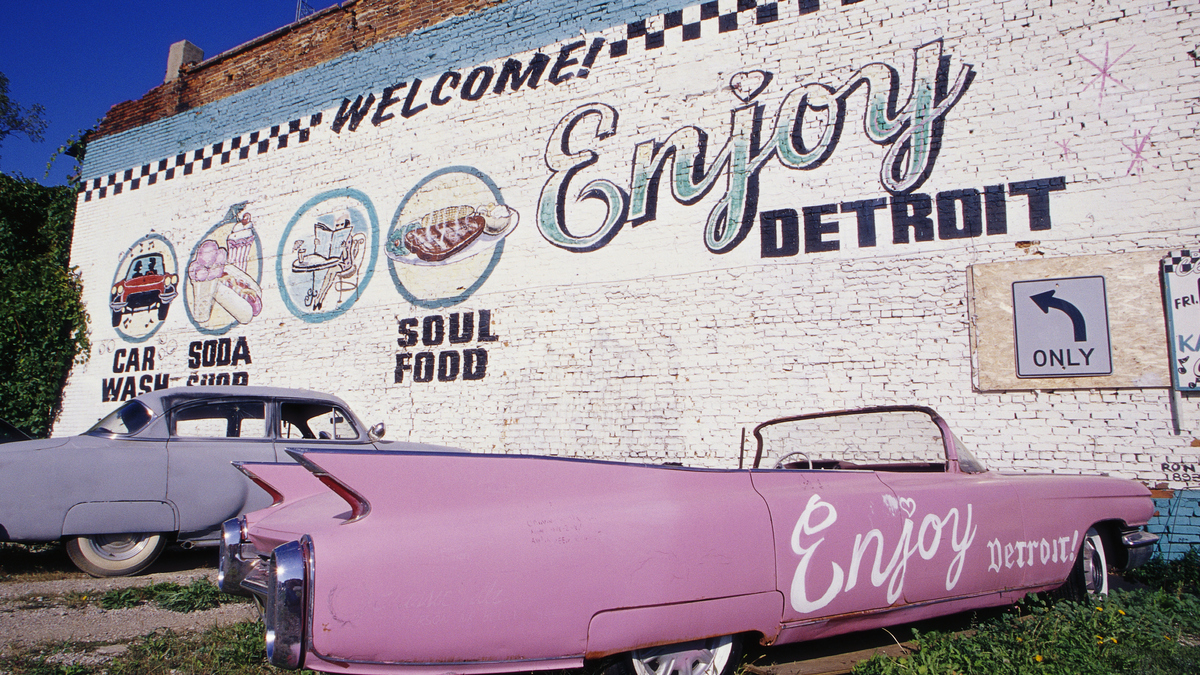 A mural outside of the Car Wash Cafe on Meldrum Street in Detroit, Michigan.

With artists like Shigeto, Protomartyr and beyond, there's a sense of holding fast to the indelible history and tradition created by the generations of artists preceding them, and of making tangible, vital music in a world overrun with endless streams and disposable downloads.

That desire is no more evident than in the work of the Detroit Sound Conservancy (DSC), a nonprofit collective "dedicated to partnerships and programs that preserve Detroit's musical legacies."

"Founding and directing DSC has been an incredible, as well as eye-opening, experience," executive director Carleton Gholz. "What I thought was merely an archival mission continues to expand because the needs of Detroit's musical communities are so intense."

Fighting to maintain historical landmarks and chronicling oral histories, the Detroit Sound Conservancy serves a multitude of functions across its ambitious mission.

"DSC's job really is to help our City live up to its own reputation by making the past bear on the present," Gholz insists. "Otherwise, we become a blank slate for all sorts of dubious short-term thinking. We must start thinking about what Detroit will look and sound like in 2067... in 2117...

"These kinds of things are important to community development work in particular because there's a narrative out there that Detroit is a blank slate, that these neighborhoods are a blank slate, that nothing's happened and no one is here," says community developer and engagement specialist Lauren Hood in an engaging video chronicling Chessmate, an early '60s venue that not only hosted such artists as Neil Young and Shuggie Otis, but was a rare public safe space for the LGBTQ community.

"These kinds of stories are important in helping people reimagine what could be."