Accessibility links
Meek Mill's Sentencing Draws Sharp Criticism Of The U.S. Parole System : The Record Artists, activists and attorneys weigh in on the strange — yet not strange — case of the Philadelphia rapper. 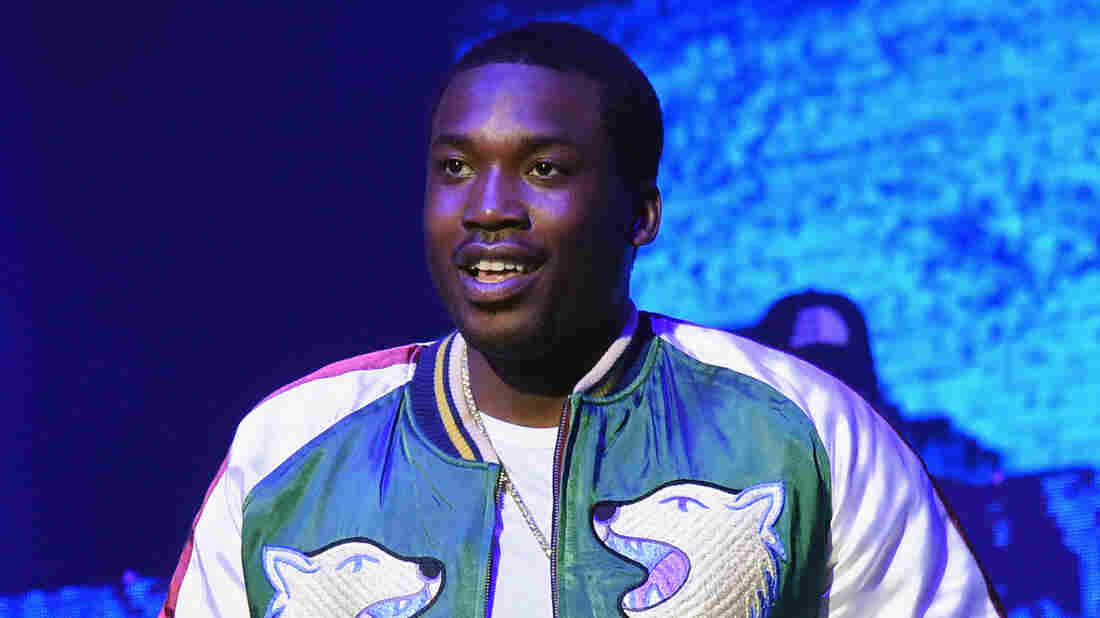 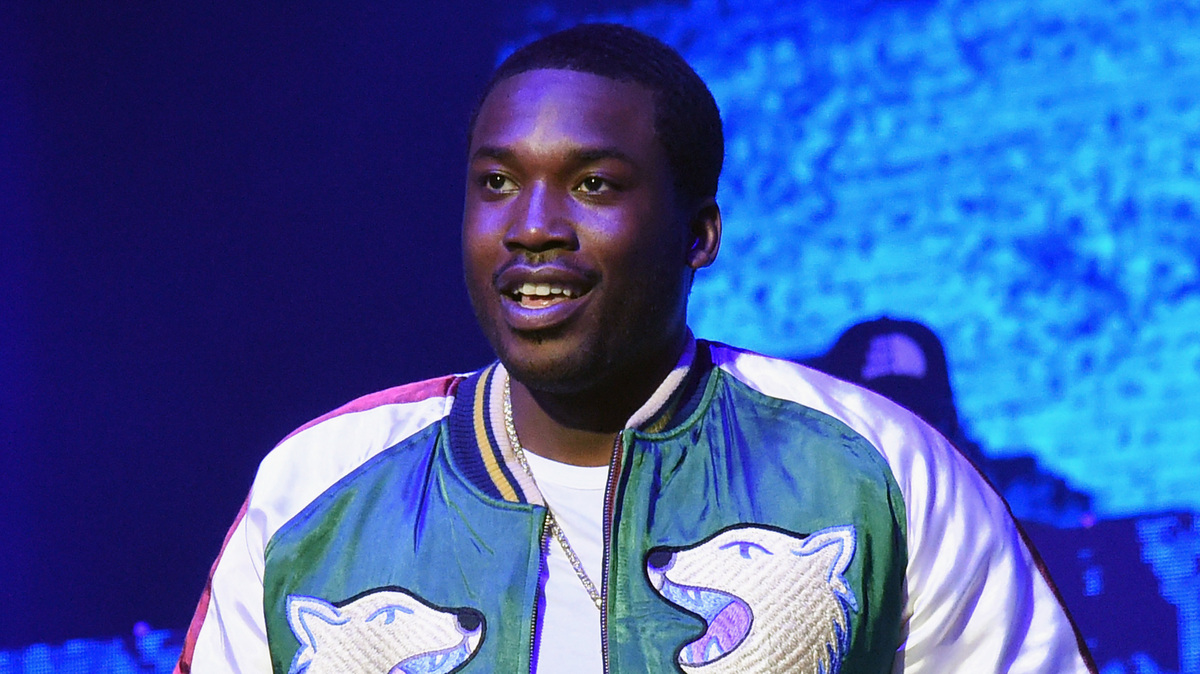 Meek Mill performs during V-103 Live Pop Up Concert at Philips Arena on March 25, 2017 in Atlanta, Georgia. The rapper was recently sentenced to return to prison for probation violations.

This past Monday evening, hundreds of supporters showed up outside Philadelphia's Criminal Justice Center to protest a ruling that sent rapper Meek Mill back to prison over violations of his probation. There was signage, chanting and hashtags (#FreeMeek and #RallyForMeek) associated with the demonstration in hopes of getting the event trending online. Member station WHYY covered the rally, reporting that the crowd included activists, athletes and rappers campaigning for Meek's pardoning and, more widely, reforms of the criminal justice system that they say are to blame for the perceived severity of his sentence. Meek's Maybach Music Group label boss, Rick Ross, made a speech in the middle of the crowd and at one point, hundreds recited one of Meek's most famous songs, the triumphant "Dreams and Nightmares (Intro)" off his debut studio album — they didn't miss a beat at the song's tempo switch.

It's now been over a week since Meek Mill, born Robert Rahmeek Williams, was sentenced to between two and four years in prison for violating his probation in the state of Pennsylvania. Meek's sentence, a decision handed down by Philadelphia Common Pleas Judge Genece Brinkley, has been met with outrage from the music community and beyond; a petition in support of pardoning the rapper has drawn over 300,000 signatures, and big names have come to bat for the Philadelphia-born artist. Jay-Z, who is usually stoic on the everyday happenings of the rap game, spoke out in favor of Meek, calling the judge's decision "unjust and heavy-handed." Colin Kaepernick wrote on Instagram that Mill is a "victim of systemic oppression."

At a time when audiences jump from one celebrity drama to the next, Meek's case has held attention because its details seem more far-fetched with every passing day.

Meek's New York-based defense attorney, Joe Tacopina, has been vocal about his opinion of Judge Brinkley's decision, as well as the judge's character. In an interview with Billboard, Tacopina cited that both Meek's probation officer and the district attorney on the case had recommended no incarceration, but that Judge Brinkley overrode them, which he took as an indication of her having a "personal vendetta" against the rapper.

In that interview, Tacopina also claimed that Judge Brinkley had requested Meek put her name in a song, as well as fire Roc Nation as his management company. NPR has made multiple requests for an interview with Tacopina and documentation of those claims which were not returned.

At 19 years old, Mill was arrested for carrying a firearm without a license and possession of drugs, according to the court docket in his case, which goes back to 2007. Judge Genece Brinkley began presiding over Mill's case at that time, sentencing the rapper to 11-23 months in prison. Mill was released in early 2009 for good behavior, and given a seven-year probation period by Brinkley. Within that period, Meek failed to report his travel plans to the judge multiple times, resulting in more jail time in 2014 and 90 days of house arrest in 2016. Along with the house arrest sentence, Brinkley gave Meek six more years of probation.

Meek then had two more run-ins with the law earlier this year — a scuffle at St. Louis Lambert International Airport in March and driving a dirt bike in Harlem in August — and even though both charges were subsequently dropped, they were violations of probation, and the apparent final straws for Brinkley.

"I gave you break after break, and you basically just thumbed your nose at this court," Brinkley said during Mill's sentencing on Nov. 7.

Kevin Harden Jr., a personal injury attorney at Ross Feller Casey, is a former prosecutor for the Philadelphia District Attorney's office, having spent four years as an assistant district attorney there. Harden never worked in any capacity on Meek's case, but was in court for some of Meek's appearances before Judge Brinkley in the past.

"I've seen them interact in court professionally," Harden tells NPR. "Judge Brinkley is personable, and I would hate for an attorney to characterize her personality, which is very motherly and caring, as some sort of impropriety."

On Nov. 14, Meek's legal team filed paperwork to request the recusal of Judge Brinkley. The request asserts that the judge had expressed herself in "personal, injudicious terms" many times in court and in chambers. The paperwork also cites, as Tacopina told the media, Brinkley's alleged song request and advice to drop Roc Nation as reasons for recusal.

"At the conclusion of the February 5, 2016, hearing Judge Brinkley invited the defendant and his then-girlfriend (Onika Maraj, p/k/a Nicki Minaj, also a prominent musical performer) into chambers, without counsel, for a conversation that was not recorded," reads the motion.

A breakdown of Brinkley's sentencing record conducted by the Philadelphia Inquirer shows that her decision on Meek last week was not an aberrant one in the context of her judicial history. Brinkley, who has 24 years of experience as a city judge, sentenced seven men in the last four years to return to prison after violating probation or parole restrictions, decisions that were, "every time," as the Inquirer writes, upheld by a higher court.

Rather than focusing on Brinkley, Harden suggests Meek's case is indicative of a pernicious pattern in the Pennsylvania probationary system itself.

"The problem with Pennsylvania's laws are that they allow probation to exist in perpetuity," explains Harden. "You can be on probation forever in Pennsylvania because you don't get time served for being on probation — that's where it's really egregious."

Meek's celebrity has not only drawn attention to Pennsylvania's judicial system, but also to one of the causes of increased incarceration rates around the country. There are 4.65 million people in the U.S. currently on parole or under probation; the Department of Justice reported in a 2015 study that Pennsylvania had the ninth-highest population of people on probation in the country.

"I think this is an opportunity for us to have a much larger conversation around how broken the criminal justice system is and the fact that people who are on parole and probation, like Meek, have very long probation terms and are still not free — they're still basically incarcerated," says Jessica Jackson, the national director and co-founder of cut50, one of the organizers of Monday night's rally. "As devastating as it is to Meek and his family and his loved ones and his supporters, this has also been an opportunity to really talk about the larger systemic issues and shine a light on what thousands and thousands, really 4.65 million people who are on parole and probation, are struggling with every day."

Though political commentator and cut50 co-founder Van Jones believes Meek's situation is part of a systemic issue, he also thinks Judge Brinkley should step down for the appeal process.

"I think it's both. You know you can have a systemic problem and then you can have someone who is making acutely bad choices in terms of how she is using her power," Jones says. "If no other judge in the city or the state agrees that popping a wheelie, getting off drugs and breaking up fight is cause for him to go to prison, I don't think that this one judge's eccentric view should ruin Meek Mill's life," he added, referring to a video shoot and a prescription drug addiction Mill reportedly picked up after a dental operation, according to remarks Jones made during an appearance on The Wendy Williams Show.