Accessibility links
Jon Hendricks, Genre-Pushing Jazz Vocalist, Dead At 96 : The Record The jazz singer and songwriter died Wednesday in Manhattan at the age of 96. 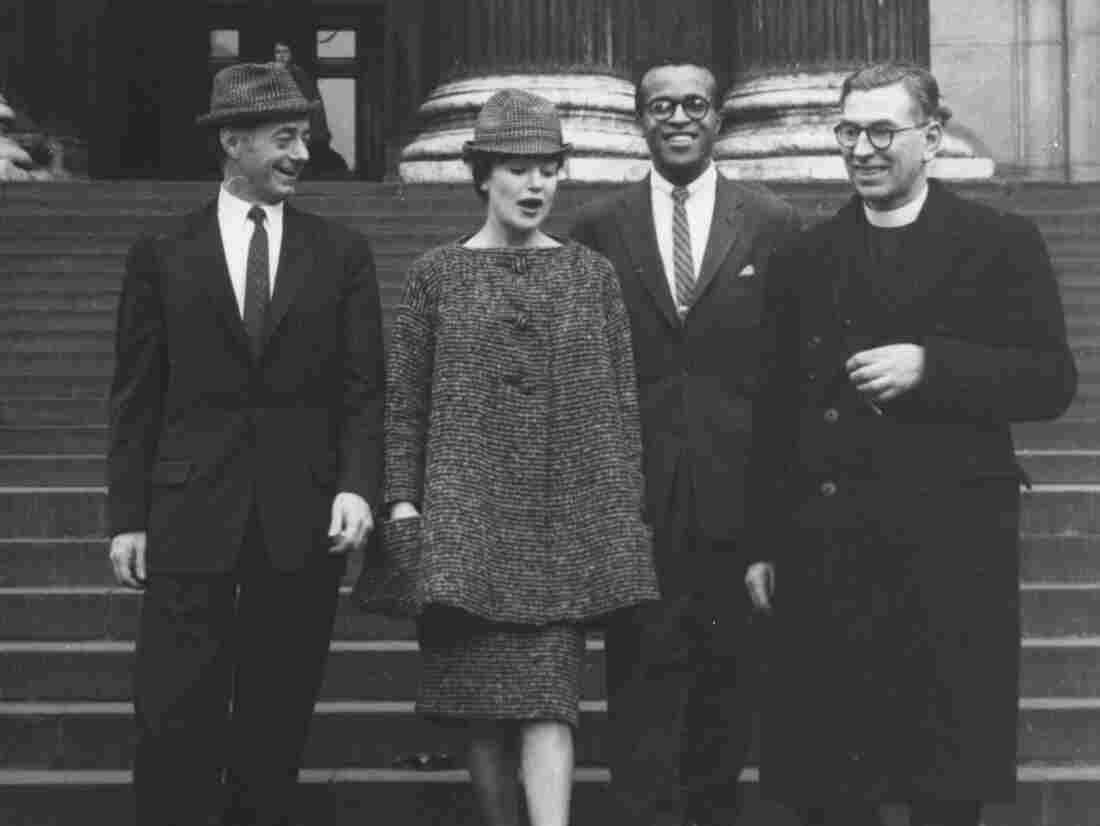 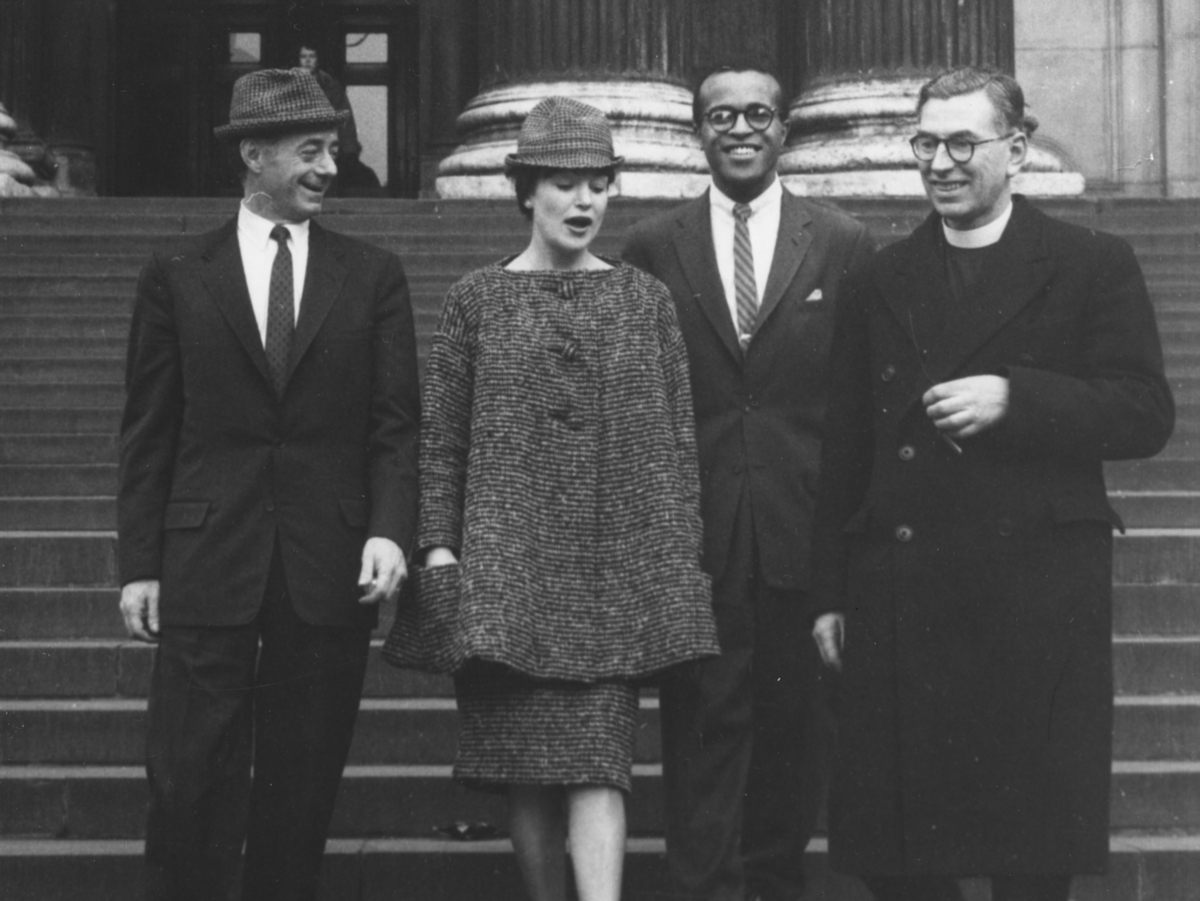 Jazz singers, Dave Lambert (left), Annie Ross and Jon Hendricks with Canon L. John Collins on the steps of St Paul's Cathedral in London in 1959. Jon Hendricks died on November 22 at the age of 96.

Jon Hendricks, the singer and songwriter who Time Magazine called the "James Joyce of jive," died today in New York at the age of 96. Hendricks was best known for his work in the pioneering vocal jazz trio Lambert, Hendricks and Ross. His death was confirmed by fellow singer and composer Kurt Elling and Hendricks' publicist, Don Lucoff.

First and foremost, he was a storyteller: funny, dexterous with language and erudite. Jon Hendricks could reference practically anything in his lyrics – from the controversy over Shakespeare's identity to the Spanish Civil War – and make them swing.

Still, he'll be remembered best for his mini-oral histories of the jazz world — like his lyrics for Count Basie's 1930's classic "Jumpin' at the Woodside."

"The Woodside is a hotel on 125th [St.] and 8th Avenue," Hendricks told NPR in 2011. "Everybody stayed there because you didn't have to go to bed at nine or 10. You could have jam session at 3 a.m. Old vaudevillians and musicians ran the hotel, the man and his wife. And so I told that story."

Like his idol, the poet Paul Lawrence Dunbar, Hendricks penned folk poetry. Only he chose his words to mimic the sounds of instruments, fitting texts not just to melodies, but the most technically demanding jazz solos.

"Who would think to do a lyric for the John Coltrane, for any John Coltrane solo? That's highly complex music," said the late singer Al Jarreau, talking to NPR in 2011. Jarreau sang with Hendricks on his 1990 album Freddie Freeloader.

Jon Carl Hendricks was born in Newark, Ohio in 1921, the son of a minister and one of 14 children.

"I was always precocious about English language and the King James Bible especially," Hendricks told NPR, "because my job in my family was to assist my father and look up in the King James whatever he wanted to use as a text for his sermon that Sunday."

As a youngster, Hendricks performed with piano virtuoso Art Tatum. He studied law on the G.I. Bill after World War II, but abandoned jurisprudence for jazz at the suggestion of legend Charlie Parker. He moved to New York City and supported himself ghostwriting lyrics for Tin Pan Alley, until he found a kindred spirit.

"Dave Lambert and I were looking for something to do before we died. Before we starved death!" Hendricks recalled. "That's literally true. Dave said, 'We both like Basie. Why don't you write lyrics to four Basie tunes and we'll take them uptown and sell them as an album?'"

They did. Sing a Song of Basie became a hit in 1957. And, with the addition of singer Annie Ross, the trio Lambert, Hendricks, and Ross was voted the most popular vocal group in the world for the next five years by readers of Melody Maker Magazine.

After they split up in 1962, Hendricks turned up in some unlikely places: as the lyricist for the No. 1 hit "Yeh Yeh" by British R&B singer Georgie Fame and singing about race riots with a fledgling rock band called The Warlocks — soon rechristened the Grateful Dead.

Hendricks worked as a music critic, taught college and wrote for the theater, singing with family groups that sometimes included young talents—among them singer Bobby McFerrin. In 1985, Hendricks collaborated with The Manhattan Transfer on their album Vocalese, for which they won seven Grammy Awards.

Jon Hendricks was a professor of Jazz at the University of Toledo, where he previously studied law. An NEA Jazz Master, he served on the Kennedy Center Honors committee under three presidents.

A reunion with Annie Ross in 2000, during the revival of the swing style, introduced him to a new generation. He continued performing almost to the end of his life. But one thing Hendricks seldom did was sing other writer's lyrics.

"Jon Hendricks always will be the greatest of jazz lyricists," says Kurt Elling, in a statement on the news. "I can't imagine him being surprised that his wife Judith thought of him as a mystical offspring of William Shakespeare."

Asked why he wasn't content to sing the words of other people, Hendricks would point to the discrimination against African-Americans in Tin Pan Alley. That, and one minor flaw he saw in the pop songs of the day: "Well, they weren't deep enough for me. They didn't go deep enough."