Accessibility links
The Mysterious Death Of A D.C. Punk And The $10,000 Reward That May Never Be Claimed : The Record The guitarist Fred "Freak" Smith was an outsized figure within Washington, D.C.'s vibrant '80s hardcore punk scene. His descent and death, which remains a mystery, is an all-too common story. 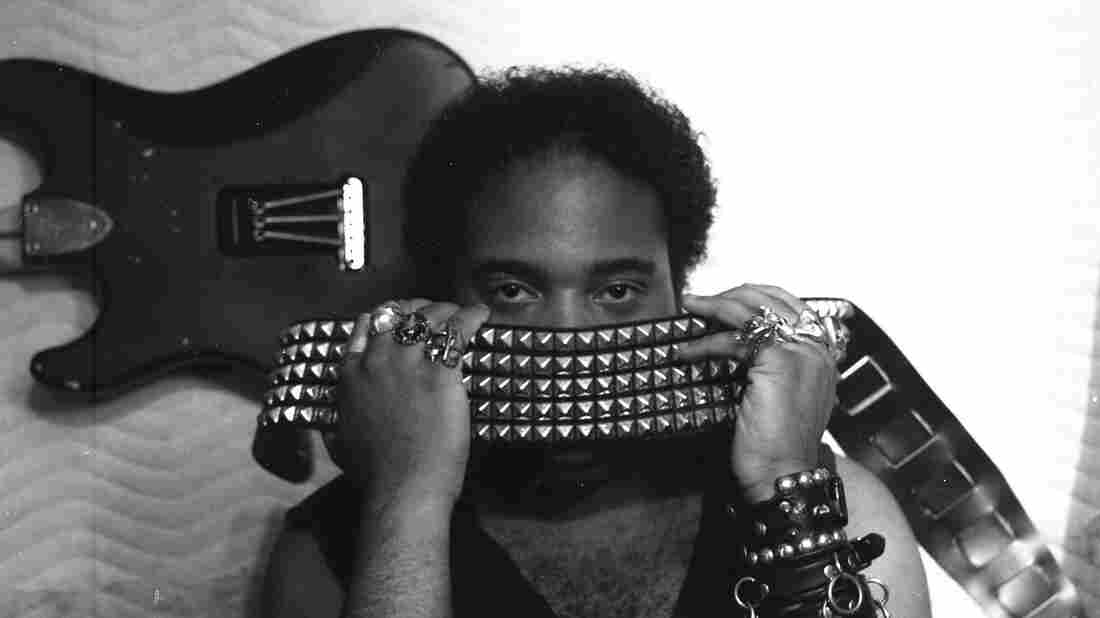 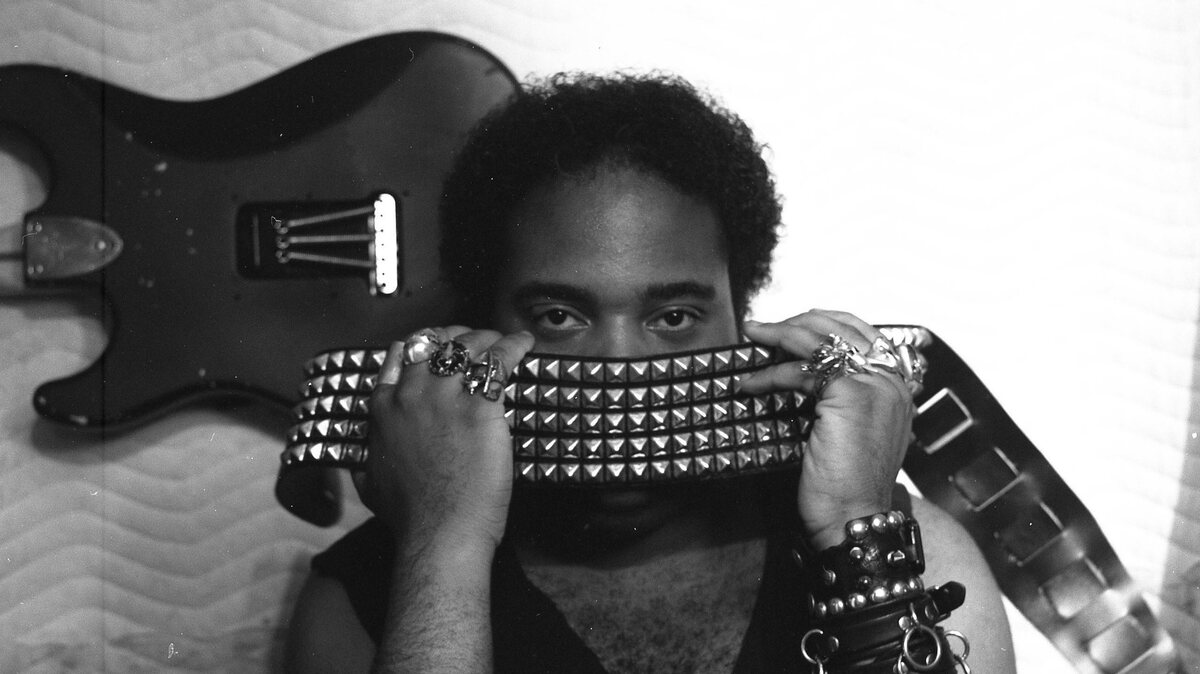 The death of musician Fred "Freak" Smith, known for his contributions to hardcore punk and his ostentatious humor, remains unsolved.

It was just another sad story on the Los Angeles evening news: a homeless man in his mid-50s, found stabbed to death in a park in the San Fernando Valley, his body in a pool of blood behind the softball fields. It took several days for him to be identified as Frederick Smith, a musician known to friends, fans and colleagues as "Freak," someone who had left an indelible mark on the epochal '80s hardcore punk scene of Washington, D.C.

Smith died on Aug. 8 in Las Palmas Park in the city of San Fernando, a northwestern suburb of Los Angeles in the valley of the same name. Four months later, the circumstances of his death remain unclear. A spokesperson for the L.A. County Sheriff's Department confirmed that his death is being treated as a homicide and remains the subject of an ongoing investigation. What is also unclear is how a talented and beloved guitarist, active in numerous bands until just a few years before his death, came to die alone and homeless, his life upended by addiction, mental illness or both. It's a question those who knew Fred "Freak" Smith from his D.C. days are still grappling with.

"Fred didn't fit in the world," says Ian MacKaye, founder of Dischord Records, the label that released the music of Smith's first and best-known band, Beefeater. "He lived the way he wanted to live."

MacKaye's earliest memories of Smith are of seeing him out at shows, where he was a distinctive figure, a "boisterous" African-American man in a mostly white scene, with a look more commonly associated with heavy metal than with punk at the time – leather vests, motorcycle boots.

"He was pretty striking-looking, even back then," says Beefeater lead singer Oman Emmet, who then went by the name Tomas Squip.

"When I first heard someone refer to me as the 'negro Lemmy,' I was floored," Smith told an interviewer from Maximum Rocknroll in 2010. Although Smith was one of several black musicians in the D.C. hardcore scene, alongside members of Bad Brains, Void guitarist Jon "Bubba" Dupree and Dag Nasty singer Shawn Brown, casual racism was still an everyday obstacle. "It was very strange to be these 'token' negros playing in front of predominantly all-white audiences," Smith recalled. "A lot of f*****g issues that we had to address when we did shows."

Another former Beefeater bandmate, bassist Dug Birdzell (aka Dug E. Bird), says Smith studied music education at Howard University. His mother worked in the diplomatic corps and his father was a doo-wop singer and one of the first black deputy U.S. marshals. But he cultivated a wild, profane persona that belied his middle-class background. His favorite word, by all accounts, was "f****r," which he used as a universal salutation, often hollered at friends across crowded punk-rock clubs. "He derived a lot of joy from comedic confrontation," says MacKaye. "Even 'f****r,' it was loving – 'Hey, f****r.'"

Emmet and Birdzell wanted Beefeater to be a politically minded punk-funk outfit; the first song on their 1985 debut album, Plays for Lovers, was a 75-second blast of jittery grooves and slashing guitar titled "Trash Funk." After their first guitarist didn't pan out, they recruited Smith, who immediately blew them away with his talent and versatility.

"If he wanted to play R&B, he could do it," says Emmet. "But it just wasn't where he was trying to go. He was into Scorpions and Michael Schenker. Whatever was mean and loud and aggressive. He didn't even like Led Zeppelin, because they weren't mean enough."

"His guitar playing was such a strong element, such an upfront, dominant part" of Beefeater's sound, says Birdzell, who credits Smith with teaching him the slap-bass style of playing that gave the band its funky feel. "We would not have gotten anywhere near as far without Fred."

MacKaye cites Beefeater's second and final album, House Burning Down, released after their breakup in 1987, as their finest effort. "They were a crazy band," he says. "At the time, the music they were making didn't really fit in with anybody." 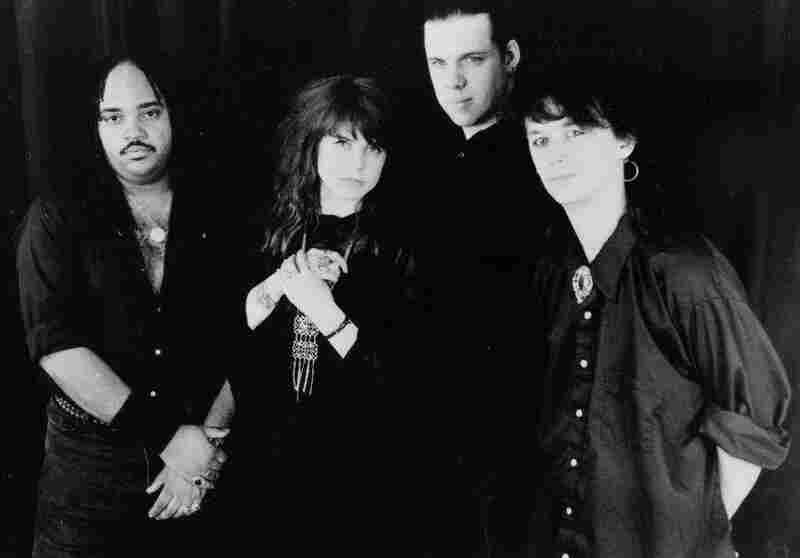 Smith left Beefeater to join Strange Boutique, a post-punk band with a darker, goth-influenced sound. Danny Ingram, the band's drummer, introduced Smith to Siouxsie and The Banshees, and encouraged him to start playing an Ovation 12-string semi-acoustic. "He was like a chameleon. He picked it up immediately," Ingram marvels. He was also, Ingram remembers, as much a part of the band's live show as their charismatic singer, Monica Richards. He developed a routine where, while soloing on a wireless guitar, he would run through the crowd to the bar, order a drink, and down it before returning to the stage.

"Strange Boutique was and always will be the best band I have ever been in," Smith said in 2010.

After Strange Boutique broke up in 1994, Smith moved to Los Angeles, where he played in several other bands, including American Corpse Flower and Blaxmyth, a self-described "ghetto metal" group that mixed hip-hop and heavy metal. Somewhere along the way, he had his name legally changed to FREAK. "All caps," notes MacKaye, who dutifully made out Smith's Beefeater royalty checks to his new name.

No one seems to know for sure when Smith's life took a turn for the worse. But by the time Ingram met up with him in Santa Monica in 2011, he was, by his own account, homeless, and the eccentricities that had once made him endearing now had a darker contour.

"We went out one night and we went from bar to bar to bar, until we finally settled on a place where Fred felt comfortable," Ingram remembers. They sat on a patio, separated from the sidewalk by hedges. "He would jump up and accost every single passerby. He would tell them the most horribly inappropriate jokes." When Smith told Ingram he was sleeping on buses and showering at the YMCA, "I couldn't believe it. I offered to give him money but he didn't want to [take] it."

MacKaye also recalls that, around this time, his email exchanges with Smith grew more erratic, a normal missive followed by a "manic" one written in all caps. At one point he claimed to have cancer, but then retracted his story.

Smith's final show in D.C., at the Black Cat in November 2011, was "chaos," says Ingram, who sat in with him for part of the set. "At that point in his life, Fred was dealing with some issues and some demons."

"He seemed to maybe be in some distress," says Birdzell, who was part of the small audience, there to support his old friend and bandmate. "But he was still positive."

MacKaye, who was also in attendance, offers a bleaker assessment of the evening. "He spent 25 minutes tuning his guitar. He had no songs and no band. It was bizarre." The Dischord founder rejects any notion that the D.C. scene somehow abandoned Smith, agreeing with Ingram that the man who changed his name to FREAK repeatedly declined offers of assistance and lived life, for better or worse, on his own terms.

"I think people who feel marginalized or feel freaky or don't fit in, there was a period of time where the extended family we created within our scene was a safe haven for them, and they flourished," says MacKaye. "And then as all things do, it fell out. But I like to think it was a respite."

A growing body of evidence suggests that musicians, and creative people in general, are more susceptible to mental health issues that can lead to other problems, including addiction and homelessness — especially in a metropolitan area like Los Angeles, where skyrocketing housing costs have contributed to the swelling homeless population, now more than 55,000. Jennie Morton, an L.A.-based psychologist, performance coach and wellness professor at the Colburn School for the performing arts, points to a recent U.K. study in which over 70 percent of working musicians surveyed reported experiencing panic attacks and/or high levels of anxiety, and a Swedish study in which researchers actually found physiological similarities between schizophrenics and the brains of highly creative people. Both groups, according to that study, are uniquely wired to experience outside stimuli with greater intensity than ordinary people — which can trigger anxiety and other mental health issues, and often leads musicians and other creatives to self-medicate with drugs or alcohol in an effort to "filter the crazy," as Morton puts it. "That's part of why we see this addictive behavior," she explains. "Because it's exhausting to live in that loud place."

Towards the end of his life, Smith or someone close to him tried to get him the help he needed. He had been staying at Blake House, a sober living facility. But at some point he had left Blake House and appeared to be living in Las Palmas Park, according to local paper The San Fernando Sun.

Thanks in part to the efforts of L.A. County Supervisor Sheila Kuehl, who took an early interest in Smith's death when she learned his backstory, there is still a $10,000 reward for any information leading to his killer. "He paved the way for African-American musicians in the punk genre," Kuehl said in announcing the reward.

But for now, the death of Smith remains as much of an enigma as the man himself.

Andy Hermann is a writer and the former music editor of L.A. Weekly.