Accessibility links
New Music Law Expedites A $1.6 Billion Lawsuit Against Spotify : The Record Just before New Year's Eve a music publishing company filed a suit seeking $1.6 billion in damages from the company. A new bill was the reason the plaintiffs went ahead. 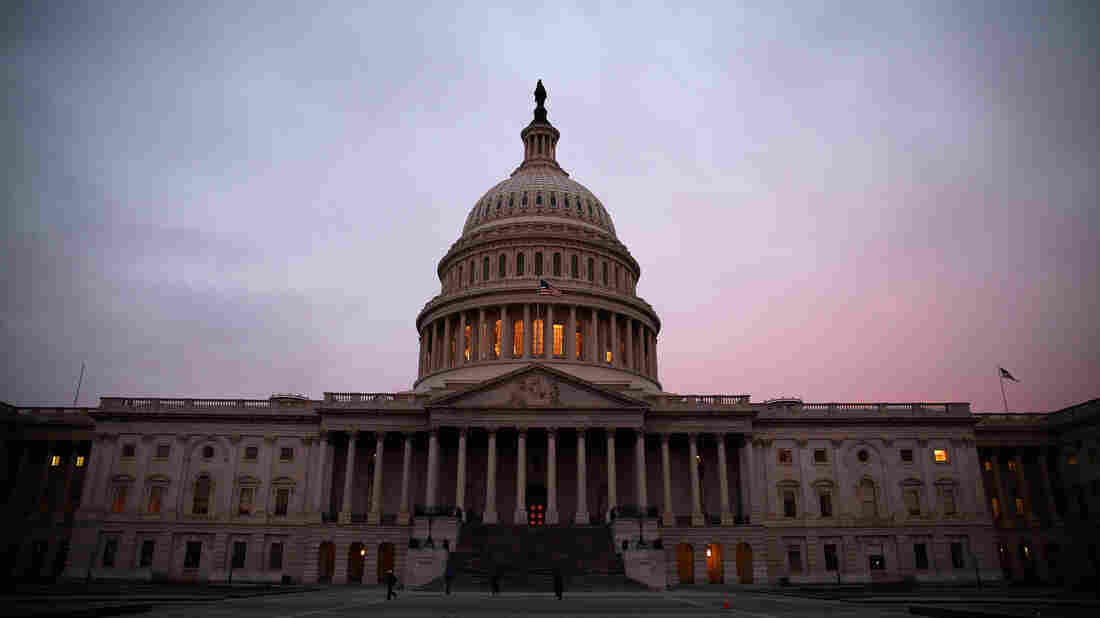 The introduction of the Music Modernization Act had the effect of prompting Wixen, a music publishing company, to file legal action against Spotify before the beginning of the new year. Mark Wilson/Getty Images hide caption 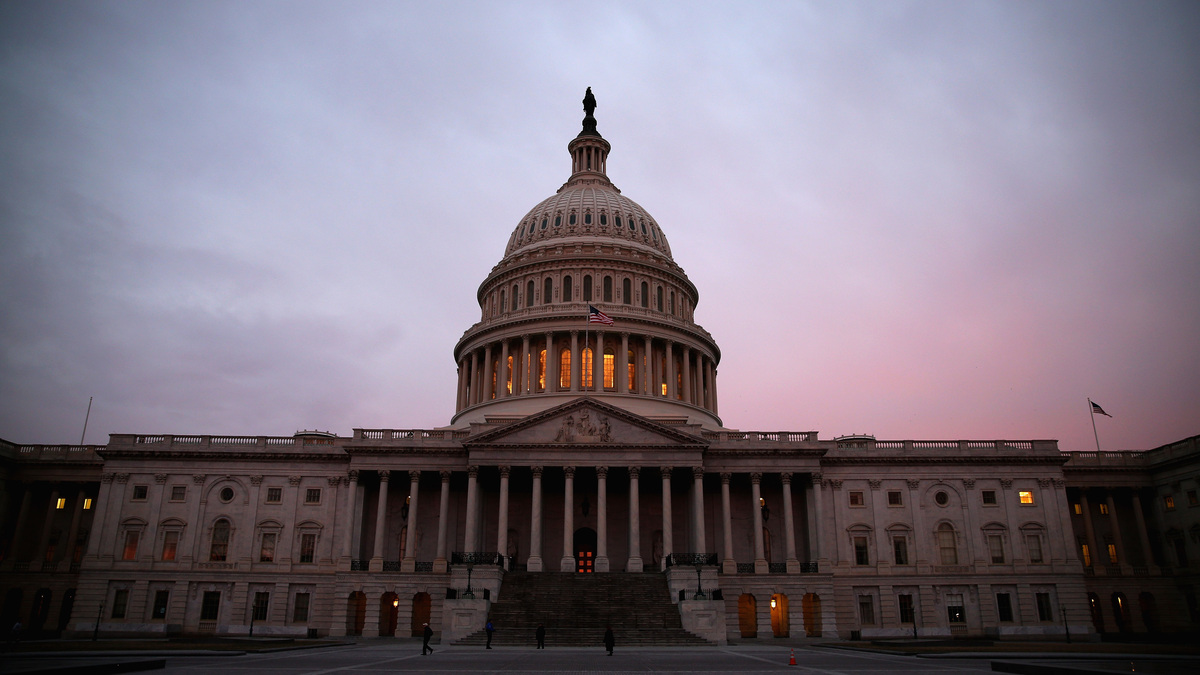 The introduction of the Music Modernization Act had the effect of prompting Wixen, a music publishing company, to file legal action against Spotify before the beginning of the new year.

When it comes to reporting on Spotify and the company's strained relationship with songwriters and publishers, it's beginning to sound like a broken ... system. But a possible fix is in.

Just two days before New Year's Eve, the music publishing company Wixen, which manages the compositions of a wide cross section of artists from Neil Young to Rage Against The Machine, filed a lawsuit against Spotify over its failure to properly license those works before making them available to stream.

The new lawsuit is not the first (or the second or the third) brought against the world's most popular streaming service over compositions, which are legally discrete from recordings and require a separate license (a "mechanical"). In fact, Wixen's action is directly related to a $43 million settlement that Spotify struck six months ago over a largely identical suit against it that it hoped would sunset further court battles.

"Unfortunately, the Ferrick settlement," reads Wixen's complaint, referring to that agreement last year, "is still grossly insufficient to compensate songwriters and publishers for Spotify's actions, as well as procedurally unjust." It seeks a "total statutory award of at least $1.6 billion." That language closely mirrors that of another legal action, brought against Spotify one month after the Ferrick settlement was announced.

The timing of the suit is inauspicious for Spotify — Wednesday it reportedly filed papers with the SEC for an initial listing on the New York Stock Exchange some time in the first half of this year.

While the reason for the suit isn't new, the reason for its as-late-in-the-year-as-you-can-get filing is. If that settlement didn't quite protect Spotify against lawsuits like Wixen's (songwriters and publishers can opt out of the Ferrick deal) then a new piece of legislation will — and it's the reason the company is going after Spotify now.

On Dec. 21, 2017, Republican Rep. Doug Collins of Georgia introduced that new piece of bipartisan legislation, which makes sweeping changes to the labyrinthine licensing system for compositions that has left many songwriters in the lurch and tech companies on the hook. It would also prevent lawsuits like Wixen's from being filed.

"It's the Music Modernization Act, and the Jan. 1 deadline it imposes, that forced our clients' hands," Daniel Schacht of Donahue Fitzgerald LLP, the firm handling Wixen's case, tells NPR of the Dec. 29 filing.

"We've been working on this now for a little over 4 1/2 years," Collins said in an interview with NPR conducted on Dec. 20. "We're trying to provide a way so that [digital services] can provide the music they want to, have a safe haven where they can match the royalties, where the songwriters can also benefit — that they can get fairly compensated. It's really is a product of a lot of hard work to reach a consensus. I have to admit, there were times during the journey that I would have — that I'd just throw up my hands and not find the answer."

The Music Modernization Act establishes, among many other things, what tech companies, songwriters and publishers have needed but failed to create for some time: a central database that identifies which songwriter and/or publisher controls which composition. (A bill introduced late last summer by Rep. Jim Sensenbrenner, R-Wis., also attempted to address the database issue but was not taken seriously by the stakeholders involved.)

That database, while long needed, has never been created — or really even come close — mostly owing to its cost and disagreements about control of the proprietary information that would have to be held within it.

"It allows the digital service providers to have a central place to go for not only paying royalties," Collins says, "but protects songwriters from them using things they shouldn't be. But also, to give songwriters a place where they can be confident that they're going to be compensated as well."

To accomplish this, tech companies would foot the bill for its creation in exchange for a blanket license that would cover the compositions within it, helping them pay the songwriters who control those works.

Digital services "will basically be indemnified, where they will not be able to be sued, which is something that songwriters and publishers had to give them — with all these things, it's all quid pro quo," Michael Eames, president of the Association of Independent Music Publishers, tells NPR. Eames says that organizations like his, which represents smaller music publishers, could benefit from the bill. "We're having to monitor and police our data in multiple databases through multiple vendors in order to get paid. It's difficult, to say the least."

The bill was drafted after consultation with industry groups that represent the major stakeholders involved, including the National Music Publishers Association, the Digital Media Association (which represents services like Spotify), ASCAP and BMI (the two leading performance-rights organizations) and the Nashville Songwriters Association International, among others. All support its passage.

However, Songwriters Guild of America President Rick Carnes issued a letter the day of the bill's introduction detailing his organization's doubts around the new law. Among his concerns:

... serious fairness, transparency and practical issues related to the proposed processes of setting up the licensing collective, the distributing of unidentified monies on a market share basis and the need to better protect music creator economic rights in that context, the vague nature of any opt-out mechanisms, the granting of relief from statutory damages liability to prior willful infringers, the scope of the musical composition database (including songwriter/composer information), the provisions concerning shortfall and other funding aspects of the collective, the absence of direct distribution of royalties by the collective to songwriters and composers, the vague nature of the audit activities to be optionally conducted by the collective, and the complications in that and other regards raised by obvious conflicts of interest issues.

Spotify declined to comment on both the Music Modernization Act and Wixen's lawsuit. But considering its forthcoming public listing, it will have to assuage investors' worries over a seemingly endless parade of litigation. Apple was sued on Dec. 28 over the same issue.

A previous version of this story misspelled the name of music publisher Wixen as Wixin.