Accessibility links
On A New Album, Dierks Bentley Heads Back To 'The Mountain' : The Record The country star talks about the importance of getting out of Nashville to record his ninth album, The Mountain, which will come out later this year, and why he looks to U2 for inspiration.

Dierks Bentley Heads Back To 'The Mountain'

Dierks Bentley Heads Back To 'The Mountain' 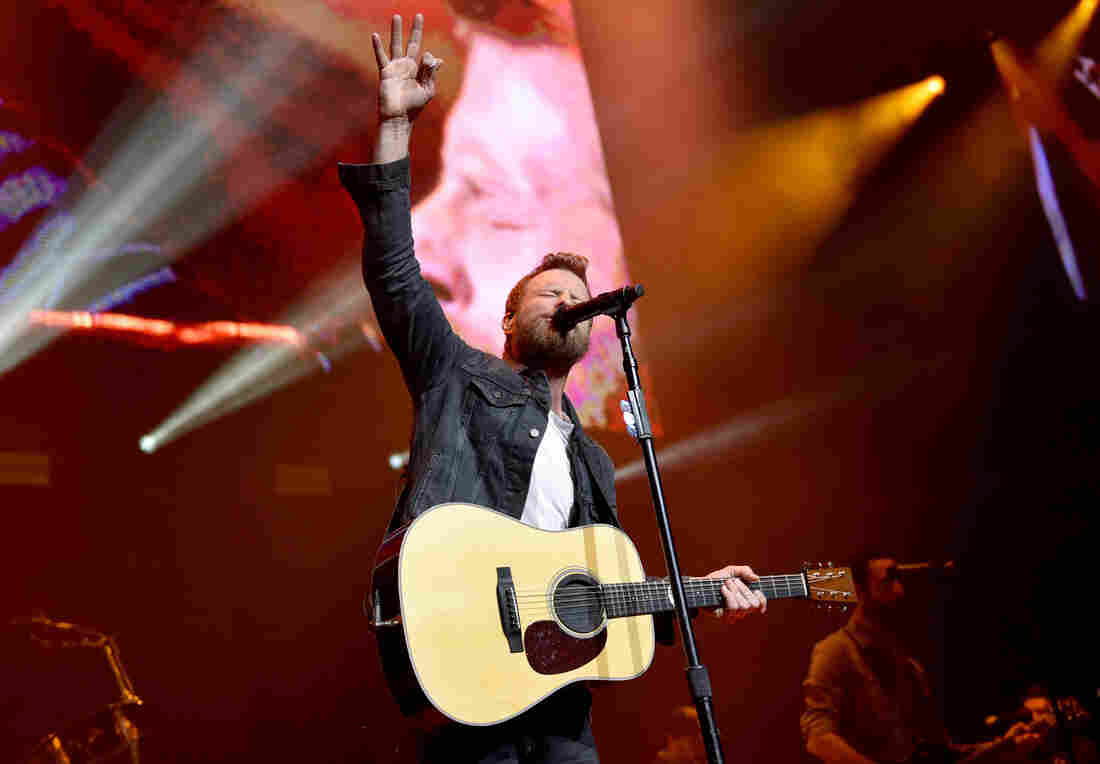 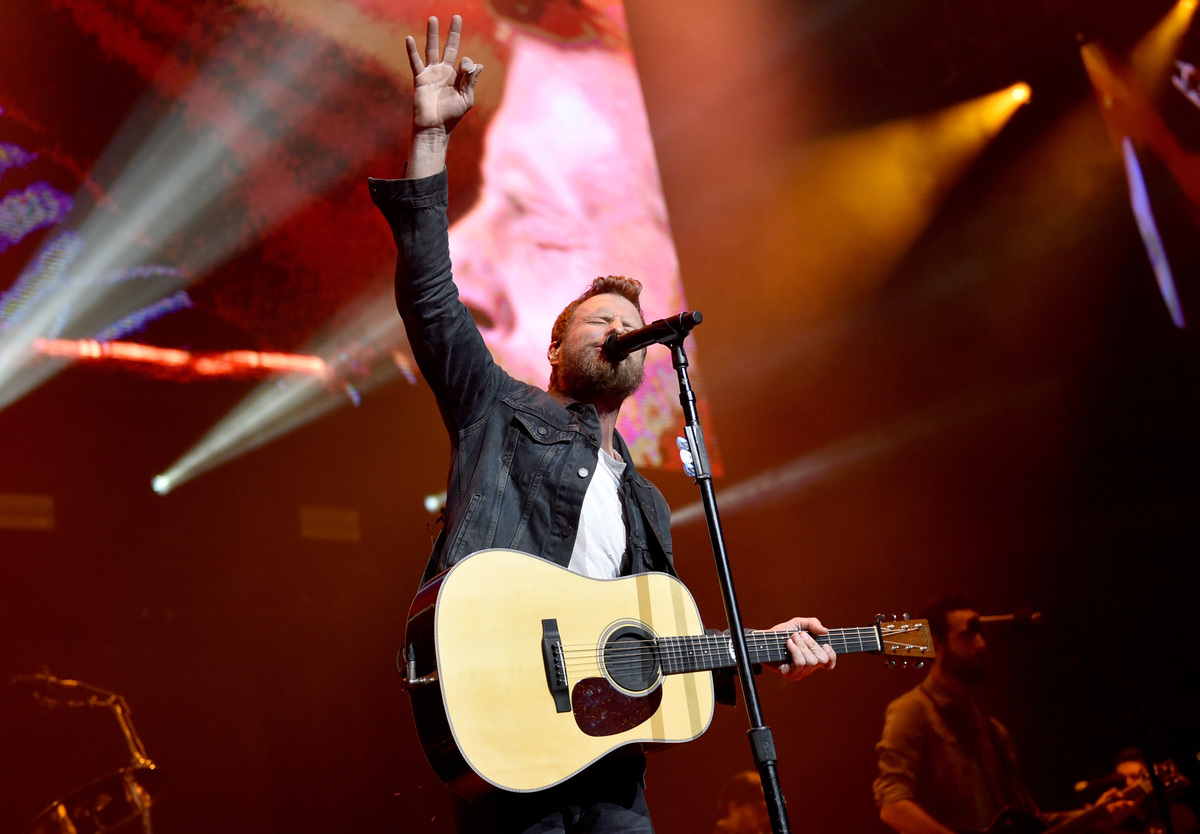 You're probably used to hearing mainstream country's male stars sing the praises of settled, southern, small-town lives, a sentiment that's suffused songs of Friday night flirtation and gentlemanly affection alike this decade. Arizona-born, arena-headlining singer and songwriter Dierks Bentley has gotten along just fine in this environment by delivering rustic romps even as he allows himself room for artistic exploration. "I'm just trying to find ways to make it meaningful to me," he says during a phone interview on his way to rehearsal. "It's kinda like I want to have my cake and eat it too. I want to have a big single that sounds gigantic that you listen to on the surface and love it, but if you're a fan, you dig deeper and go, 'Oh, I see what he's doing.'"

On his upcoming ninth album, The Mountain, announced today and due out later this year, he pursues themes of questing and self-actualization across a wide-open terrain of arid deserts and rugged ridgelines, cactus flowers and tumbleweeds. While the tracks possess the propulsive power, programmed loops and digital snap of current country production, the bluegrass textures of mandolin, banjo, fiddle and flatpicked guitar and the shimmery, resonant twang of West Coast country-rock sit right out front.

For Bentley, balancing broad appeal with his own musical interests is hardly a new goal. Those who haven't followed his career closely may be surprised to learn that he and Miranda Lambert were among the only contemporary country acts to be profiled within the pages of the original incarnation of the alt-country magazine No Depression in the mid-'aughts. The feature on Bentley made much of the fact that he was a rising country contender who also sought the contributions of Americana songwriters and bluegrass pickers.

By 2010, after charting nearly a dozen top 5 radio hits, he was ready to step off the industry's promotional treadmill, at least temporarily, and hole up in Asheville to record the string band album Up On the Ridge. After that, he was back to the hustle, this time intent on taking a more artful, thematically unified approach to album making. 2016's Black was his most conceptually sophisticated work to date, its loose narrative thread following a thoughtless cad through romantic trysts and trials that ultimately force him to consider feelings other than his own. When Bentley toured behind it, he got his bluegrass kicks each night by opening the show with a drolly disguised acoustic version of his band. "We open for the opener who opens for the opener who opens for us," he explains.

The making of The Mountain, much of which happened in the Colorado ski town of Telluride, home to a storied progressive bluegrass festival, was an especially freewheeling process. Bentley called NPR to talk about it.

This interview has been edited.

What sort of creative headspace have you been in since making Black?

These records, one thing that's consistent is that I go in with no expectations. There's nothing calculated or planned. There's no meetings about what the next record needs to be. It's usually me going, "I have no idea what I'm writing about. I don't know what the next record's going to be." Usually, [my manager] Mary [Hilliard Harrington] gives me a deadline, and I've discovered that that's like the most helpful thing for me.

What sort of deadline?

The tour is big business, right? You know, the tour launches in May. We have opening acts. We have a lot of stuff lined up. [She said,] "It would be nice, Dierks, if we could have a first single by January." That does make sense. I mean, when you go out to tour, it would be nice to have some new music, right?

Every record needs to be different. It needs to stand up on its own. I'm not from the south. I can't make records that draw upon certain southern ideas and lifestyles and nostalgic things. I don't have that crutch, which can be fortunate in some ways. It forces me to work a little harder, I think. If it's a sound or an idea or a song, I need to find something that's gonna give me the inspiration to jump off of. With this album, a lot of it [started] at Telluride, the bluegrass festival. I played a show there. Sam [Bush] and Tim [O'Brien] and Jerry [Douglas] and the [Travelin'] McCourys all got up with me. Chris Thile got up with me. It was an awesome set.

This was last year.

This was June. I said to the crowd, "The only thing missing is Del McCoury," and I had my Del McCoury shirt on. Then he walked out of the small backstage area. It was one of the best days of my life, in a setting that I'm very familiar with. I've been there many, many times. But there was something about this time. I started thinking about the album, and I'd been working on that movie [Only the Brave, about Arizona firefighters] and my beard was growing out. I missed the West.

Ever since you made your string band album Up On the Ridge, you've been threatening to make another album like it. While you didn't do that exactly, you did do something you hadn't done since then: get out of Nashville, the epicenter of commercial country recording, to record. What difference does a change of scenery like that make?

I've had the idea for a western album, but I didn't know what that even meant. was it going to be a Marty Stuart-type thing? I love that album [Way Out West]. Was it a sonic thing? A lyrical thing? A bunch of nature references? Was it Marty Robbins? So I was like, "Let's go to Telluride." There's something about it that just makes you reach for a guitar.

You brought your co-writers with you.

Yeah, a lot of people I've been writing with in town. They're all the best of the best. Luke Dick, Natalie Hemby, Jon Nite, Jon Randall, Ross Copperman, Ashley Gorley. They'd never been there before and it was magic. We'd write all day long and around four o'clock we'd meet on my deck at this tiny little house and start drinking some beers and hanging out, watch the sunset, watch the mountains change colors, everyone playing songs. There were six of us all sleeping in this one house. It was a chance for a bunch of 30- and 40-year-olds to pretend they were living in a small house in Boulder or something. You felt like you really could just be free. I'd never done anything like that. While we were there, Ross goes, "Man, we should come back out here and record." I was like, "That'd be so fun, but yeah right. That'll never happen." And then we did.

Mary found a studio 30 minutes outside of town where Sam Bush had done something and Jewel had done, like, an audiobook. My buddy [studio engineer] Reid Shippen went out there and checked it out and brought all this gear in a box truck and he was like, "This place is great!"

You've always talked about Up on the Ridge as a time when you momentarily stepped away from maintaining your mainstream hitmaker status to do something you want to do artistically. How were you trying to harmonize the sounds of the mainstream and margins this time?

What I said to the musicians was, "Look around you. Look at the mountains. I can't verbalize this. Just go for a hike, take the gondola, get some coffee, walk around town, take in the vibe of this location. That's what I need you to make the record sound like." That's how I think it ended up having this western feel that I was looking for.

You mentioned Marty Robbins. His cowboy ballads are one of many examples of a once-present western flavor in country music. But for a long time now, small southern towns have been the setting of choice for country songs. Besides the fact that you're an Arizona native, what appeals to you about grounding this stuff in western landscapes?

The idea of the West and the physical sense of a mountain, but also climbing a mountain. I've met so many people and everyone you meet has a story to tell. I mean, it's right there in front of you. Everyone's climbing this mountain. Everyone's trying to better themselves. Everyone's looking for a way to push forward and looking for that recharge. I feel like this album is about that western vibe, but there's also that big metaphor of a mountain, putting one step in front of the other and continuing to climb.

In the past, you've talked about your realization that the country music you heard growing up, George Strait and George Jones, was adult music. But you've built your career in an era when the pendulum has swung toward youth appeal and party-soundtracking. You told me several years ago that you were figuring out how to balance party guy and family guy personas and how to make space for both raucous, arena-friendly material and artistically satisfying stuff. What's your take on that now?

I think the more you can get out of your head and do what instinctually feels right, the more authentic it's gonna be. I don't think about any of that anymore. I just think about doing the work so I can be present for the reward when it's time to walk on stage. I don't care about demographics or ages. Hopefully it's just good music. At this point in my career, I have nothing to lose. So it's like, "Let's make the best album we can make. Let's take the most chances." What's the worst thing that could possibly happen?

That's not necessarily the way that everyone thinks in country music. For some of your peers, delivering consistency seems to be what matters most.

I've never been that way. I think of a band like U2 or something, where every album, you might love it or you might hate it but it's gonna be different.

As much as you've talked about not overthinking things at this point in your career, I would say that you do, in fact, put a lot of thought into it, or you'd be approaching this process differently.

It's a combination of I've never cared less in my career, and at the same time, I've never cared more. I don't care about the success of the album as much as I care about it just has to be right. And not having regrets. It's important to me to be completely focused and not miss an idea.