Accessibility links
5 Storylines To Watch At The 2018 Grammy Awards : The Record Will Kendrick Lamar be denied? Will protests prevail? Where are the guitars? Which performances will pop? Who will break down barriers?

5 Storylines To Watch At This Year's Grammy Awards

5 Storylines To Watch At This Year's Grammy Awards 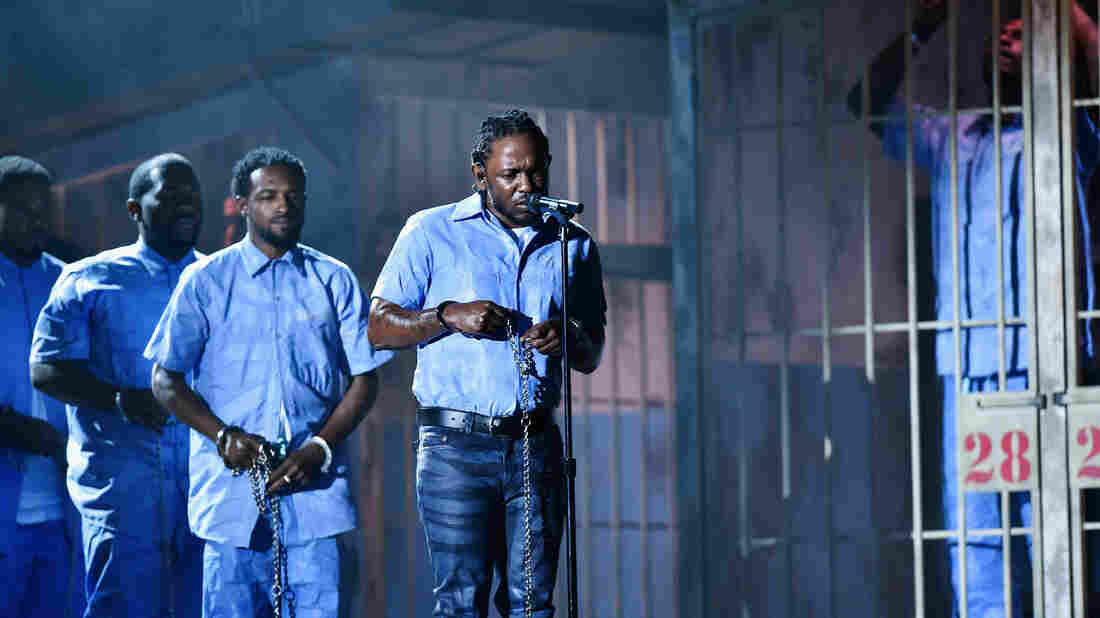 Kendrick Lamar performs at the 2016 Grammy Awards. The rapper is nominated in seven categories this year. Kevork Djansezian/Getty Images for NARAS hide caption 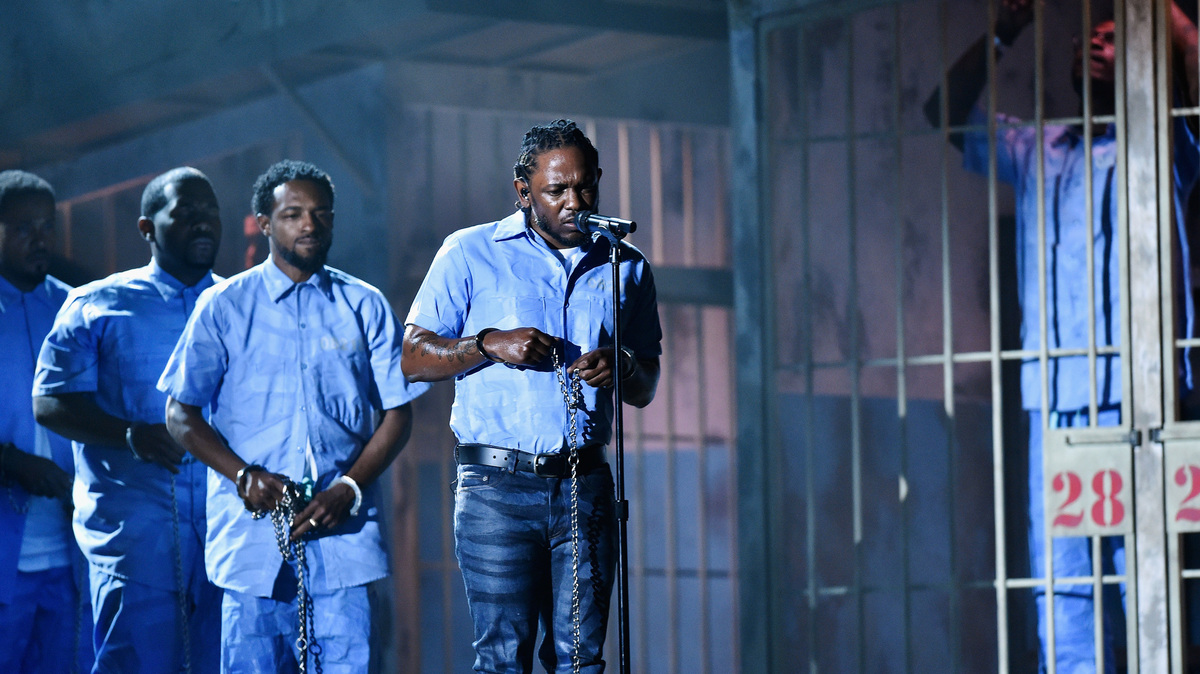 Kendrick Lamar performs at the 2016 Grammy Awards. The rapper is nominated in seven categories this year.

The Grammy Awards have many roles to play in the cultural conversation. Above all, they're a music-industry showcase and infomercial, stuffed with three and a half hours of live performances meant to spark social-media conversation — and, by extension, sales, streams and TV ratings. But they also function as a way to crown what you might call ambassadors: marketable standard-bearers the industry sees as its faces and future. Each year, the Grammys provide a window into how the music business wishes to see itself, which in turn makes each telecast a surprisingly useful snapshot.

By Monday morning, this year's snapshot will have come fully into focus. Here are five looks at how it might play out — and the story it might tell.

1) The dominance of hip-hop and R&B — and the question of Kendrick. Generally speaking, Grammy history is pockmarked with embarrassment, from wins for a lip-syncing Milli Vanilli to Macklemore's notorious sweep of the hip-hop categories (over, among others, Kendrick Lamar) in 2014. In recent years, subtler controversies have prevailed: Beyoncé's Album Of The Year losses — to Beck in 2015 and Adele in 2017 — have pointed to a Grammy glass ceiling for groundbreaking works in R&B and hip-hop. In 2016, Kendrick Lamar's massively acclaimed hip-hop epic To Pimp A Butterfly lost to Taylor Swift's 1989.

The nominees in the Album Of The Year category are usually spread out among many genres, with an edge given to rock and pop. But in 2018, the five nominees include Kendrick Lamar's dominant DAMN., Jay-Z's gripping 4:44, Childish Gambino's psychedelic soul opus Awaken, My Love! and Bruno Mars' smash-laden retro-R&B set 24K Magic. Though it keeps its edges intact, Lorde's Melodrama is the closest thing to a pure pop record on the list — which could help it benefit from vote-splitting — though Mars' album comes close enough to count.

Bottom line: Kendrick Lamar has been nominated for Album Of The Year three times in five years, and DAMN. was by most accounts 2017's most beloved record. If he doesn't take the trophy in 2018, conversations will revolve around the snub come Monday — and for years to come.

2) The prevalence of protest. Given the size of the Grammys' platform — and the degree to which recent awards shows like the Golden Globes have addressed issues of sexual misconduct in the entertainment industry — it's hard to imagine a purely apolitical night. Politics will surely seep into the performances and speeches; the only questions are when, how and with what level of advance planning. Attendees have been widely urged to wear white roses at the ceremony in a gesture of "hope, peace, sympathy and resistance," but few other measures have been announced.

If the volume of protests barely rises above a whisper — if people wear roses, but no one explicitly acknowledges the massive gender gap among Grammy nominees or recently publicized instances of sexual assault and abuse in the music industry — it's going to stand out, especially when contrasted against the coordinated efforts of other awards shows. In the age of #MeToo, white roses alone aren't likely to suffice. This year, in this environment, silence could well become a story unto itself.

3) Where are the guitars? If we're measuring industry dominance by Grammy nominations — and, you know, maybe we shouldn't — then guitar-driven pop, rock and country have suffered precipitous declines in recent months. Ed Sheeran has been a Grammy favorite in the past, but his smash album Divide (and its inescapable hits "Shape Of You" and "Castle On The Hill") got shut out of all but the pop categories. For many months, it seemed like Sam Hunt's "Body Like A Back Road" might be the world's only country song, but it missed out on nominations for Song Of The Year or Record Of The Year. The Best New Artist category, another one usually spread out among as many genres as possible, stuck entirely to pop, R&B and hip-hop, with nominations for Alessia Cara, Khalid, Lil Uzi Vert, Julia Michaels and SZA. Massive, rock-leaning 2017 hits by Portugal. The Man and Imagine Dragons were relegated to the margins — or, more specifically, the category of Best Pop Duo/Group Performance.

4) Possible milestones. Though she faces steep odds against Kendrick Lamar and Jay-Z (as well as Migos and Tyler, The Creator), Rapsody could become the first solo woman ever to win Best Rap Album. Lauryn Hill won the award as a member of The Fugees back in 1997, and a handful of women — including Nicki Minaj, Missy Elliott, Eve and Iggy Azalea — have been nominated. But the category has tilted almost entirely toward men since its inaugural winner, Naughty By Nature, in 1996.

This year's most likely boundary-buster? Luis Fonsi and Daddy Yankee's unstoppable "Despacito" broke records for streaming and is now nominated for Song Of The Year and Record Of The Year — and, should it prevail, would be the first Spanish-language winner in either category in generations. For Record Of The Year, it's up against Childish Gambino's "Redbone," Jay-Z's "The Story Of O.J.," Kendrick Lamar's "HUMBLE." and Bruno Mars' "24K Magic"; for Song Of The Year, it faces Jay-Z's "4:44," Julia Michaels' "Issues," Logic's "1-800-273-8255" (featuring Alessia Cara and Khalid) and Bruno Mars' "That's What I Like." The nominated version of "Despacito" isn't sung entirely in Spanish, given its inclusion of guest Justin Bieber, but it comes close enough.

There'll also, sadly, be a few opportunities for posthumous wins — including two in the category of Best Rock Performance. Leonard Cohen's "You Want It Darker" and Chris Cornell's "The Promise" will face off against songs by Foo Fighters, Kaleo and Nothing More. Elsewhere, the late Carrie Fisher competes for Best Spoken Word Album against, among others, Bernie Sanders.

5) Which performances will pop? Kesha, who experienced a huge commercial and critical resurgence in 2017, will intersect with the #MeToo movement when she sings her hit ballad "Praying" — that could be a show-stopper, for sure. (She'll take the stage alongside Camila Cabello, Andra Day, Cyndi Lauper and Julia Michaels.) E! Online is reporting that Kendrick Lamar will open the telecast with a performance that incorporates appearances by U2 and Dave Chappelle. Jay-Z has likely bowed out of performing — he'll still show up to pick up his Salute To Industry Icons Award, as well as any other trophies he might win throughout the evening — but other confirmed performers include Jon Batiste, Alessia Cara, Cardi B, Childish Gambino, Eric Church, Gary Clark Jr., Miley Cyrus, DJ Khaled, Luis Fonsi & Daddy Yankee, Emmylou Harris, Elton John, Khalid, Lady Gaga, Little Big Town, Logic, Patti LuPone, Bruno Mars, Maren Morris, Pink, Ben Platt, Rihanna, Sam Smith, Chris Stapleton, Sting, SZA, Bryson Tiller and many more.