Accessibility links
Same Old Rap: The Grammys' Race Toward Irrelevance : The Record With hip-hop shut out of top categories in a year defined by the genre's most urgent voices, the Recording Academy mirrors America's racialized politics. 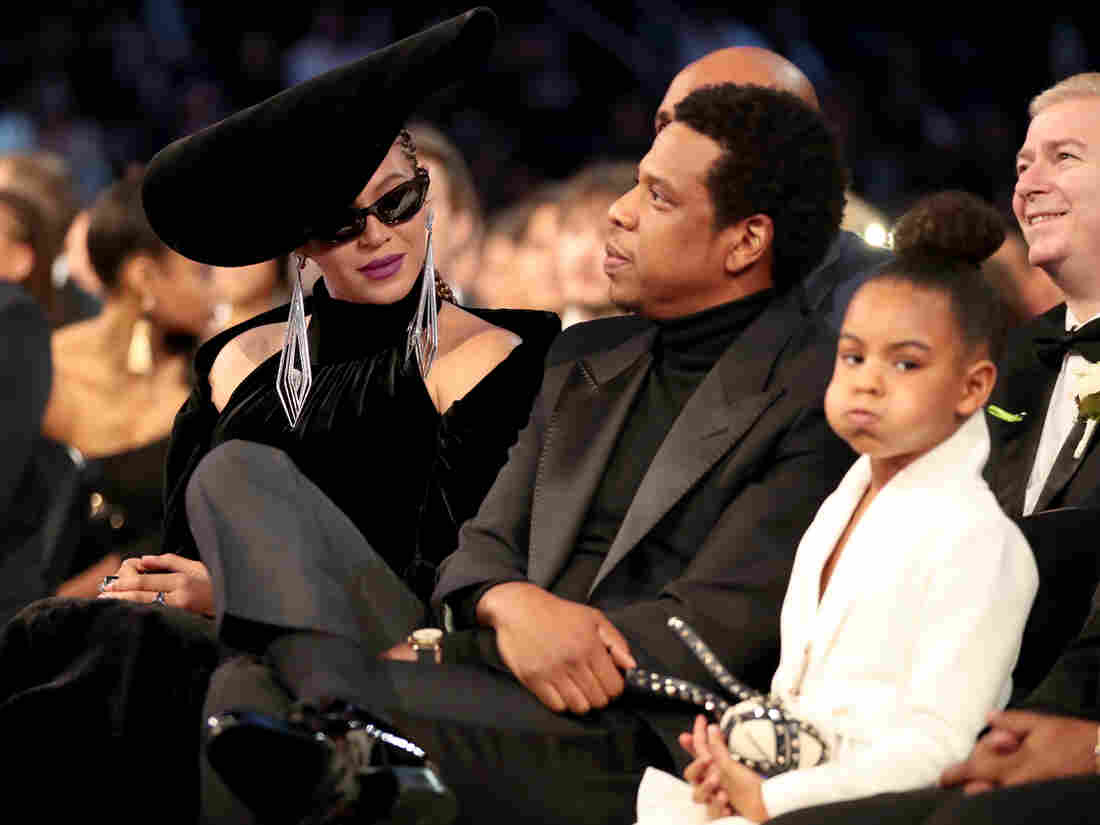 Jay-Z (center), who was nominated for eight Grammys but won no awards Sunday, with his wife, Beyoncé (left) and daughter, Blue Ivy Carter, during the ceremony on Sunday. Christopher Polk/Getty Images for NARAS hide caption 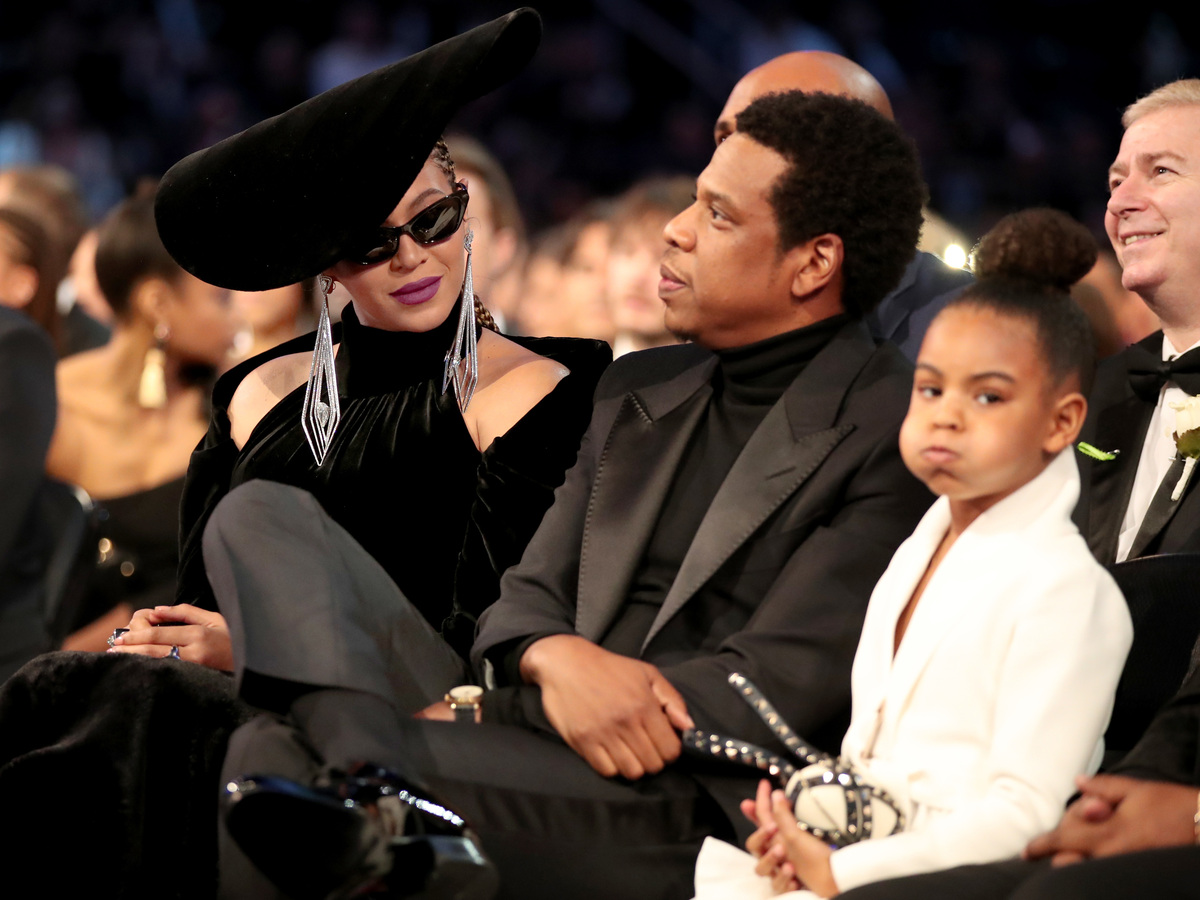 Jay-Z (center), who was nominated for eight Grammys but won no awards Sunday, with his wife, Beyoncé (left) and daughter, Blue Ivy Carter, during the ceremony on Sunday.

It's time to acknowledge that the Grammy Awards has a real race problem on its hands: It's racing toward total irrelevance.

Well before the night reached its disappointing apex, viewers were already feeling let down. "[S]till mad as hell that I kept watching the Grammys after Best New Artist," Nadeska Alexis, the moderator of Complex's Everyday Struggle hip-hop commentary show, tweeted during her morning-after commute today, echoing the sentiments of most hip-hop fans. She was referring to the loss by R&B darling SZA in the Best New Artist category, despite the breakout success of her debut album Ctrl in 2017. The loss by Kendrick Lamar's Top Dawg Entertainment labelmate foreshadowed the rest of the 60th Annual Grammy Awards.

This happened despite the Academy's attempt to make up for its history of snubs where hip-hop, and black music in general, are concerned. The main event of November's nominations was the record number of rap artists nominated outside the hip-hop categories. For those keeping score, it signaled that the Academy might finally be ready to acknowledge that the genre's impact is much broader than the narrow confines to which it has historically been relegated. The recognition seemed to coincide with the rise of hip-hop/R&B — i.e. black music — as the most-consumed genre in 2017.

Two of 2017's most resonant albums, Kendrick Lamar's DAMN. and Jay-Z's 4:44, competed against rapper Childish Gambino's funk-inspired departure "Awaken, My Love!" in a category rounded out by Lorde (Melodrama) and ultimate upsetter Bruno Mars (24K Magic), who also took home respective trophies for Song and Record of the Year ("That's What I Like," "24K Magic").

Even with the deck stacked in hip-hop's favor, the genre came up short yet again in the coveted Album of the Year category. But the real loss is for the Recording Academy, which continues to prove how out of step it has become. If the story of 2017 is hip-hop's takeover, the Grammys, by failing to reflect rap's urgency, have settled deeper into an age-old narrative.

Oddly enough, Jay made a record as close to Grammy bait as any, a veteran performer releasing his most mature album to date, wrapped in a vulnerable narrative that features everything from him apologizing for celebrity infidelity to his mother's personal coming out on record. And Lamar released a record deemed consensus album of the year, a critical and commercial success, by toeing the line between heady conceptual arc and rare pop triumph.

The snub makes it explicit that the Grammys is not here for hip-hop. And that's no surprise. As is often the case, there are plenty of other problems we could discuss regarding Sunday night's Grammy Awards. The lack of women nominees, in a year when the industry's complicit silence around sexism speaks louder than the resulting #metoo movement, is a travesty. And there's no excusing how the Spanish-language "Despacito," which tied for longest-running Billboard 100 No. 1, failed to pick up a single award.

These are the results of a flawed voting process that increasingly fails to reflect the will of the majority in pop or politics. The electorate, in this case, is an aging academy membership in dire need of hip replacement surgery. But there's a bigger takeaway regarding the Academy's record on hip-hop that's easy to miss. Despite celebrated Album of the Year wins by Lauryn Hill (The Miseducation of Lauryn Hill, 1999) and OutKast (Speakerboxxx/The Love Below, 2004), a pure rap album has never won the Grammy's most esteemed category. Without the R&B-heavy stylings Lauryn offered on Miseducation or Andre 3000's pop-inflected melodies, a la "Hey Ya," on The Love Below, neither of those projects would've been primed for the award. Not even Eminem, the genre's great white hope and one of the best emcees of all time, has won in the coveted AOY category; nominated for The Marshall Mathers LP in 2001, he lost to Steely Dan.

So, what does it mean? Are the Grammys woefully out of touch, or do these chronic missteps mirror a deeper reflection of America's inbred racism?

That, in no way, erases the impact of Bruno Mars' album win. Being a man of color himself, he acknowledges R&B predecessors from Jimmy Jam & Terry Lewis to Teddy Riley among his greatest influences. But in 2018, he's also a safe Grammy pick who echoes the sounds of the past with performances that recall an era of black music more palatable to the mainstream now that it's two decades in the recycled past. His chops may be rooted within the realm of hip-hop, as The New York Times Magazine's Jody Rosen argued today, but it's the fact that his music is also pop-friendly, drawing from many genres, that makes him easy for Grammy voters to embrace.

Meanwhile, artists pushing the envelope in 2017 are forced to watch from the sidelines or fight like crabs over the rap categories. Hip-hop's relationship with the award show began with a boycott back in 1989. Since then the debate has continued to rage on about whether such recognition matters. From frequent Grammy-winner Kanye West to the never-nominated Vince Staples, rap artists have pointed to the significance of rap being segregated from the general categories. While November's list of nominees looked hopeful, it was only a reminder of the inherent bias that remains built into the system in the end.

An artist would be stupid at this point to believe in change. Jay-Z reportedly declined the Academy's invitation to perform last night. A performance on the Grammy stage works wonders for most young artists, but at this point in Jay-Z's career he'd only be putting on a spectacle for ratings. The most successful rap artist in the history of the genre might not require our sympathies, but just imagine what it must be like for Jay-Z to walk away empty-handed in the general award categories, just as his wife Beyoncé did one year ago. When Adele won Album of the Year over Lemonade, even she admittedly struggled to accept the award.

But I don't know if the Academy deserves all the blame. Maybe the award show is a scapegoat for a greater ill. The Grammys' continued ghettoization of hip-hop is a distillation of America's longstanding record on race. It's a woefully offbeat record that black artists continue to remix and subvert. But if the rough and real noise heard in voices that dare to challenge that record — like those voices employed by Lamar throughout DAMN. or the ones Jay exorcises on such 4:44 songs as "Story of O.J." — continue to fall on deaf Academy ears, those voices will only grow louder. And the Grammy's will mute its own self-importance.

In the end, a show of some sort will go on — whether onstage or off. Because "the only thing more frightening than watching a black man be honest in America," as comedian Dave Chappelle interjected last night during Kendrick Lamar's opening performance, is being black in America.