Accessibility links
Making Sense Of The Super Bowl's Musical Moments : The Record A strained "Star-Spangled Banner," a decaf flat white of a halftime show and, of course, the advertisements: Super Bowl LII's musical moments were legion, if often little else. 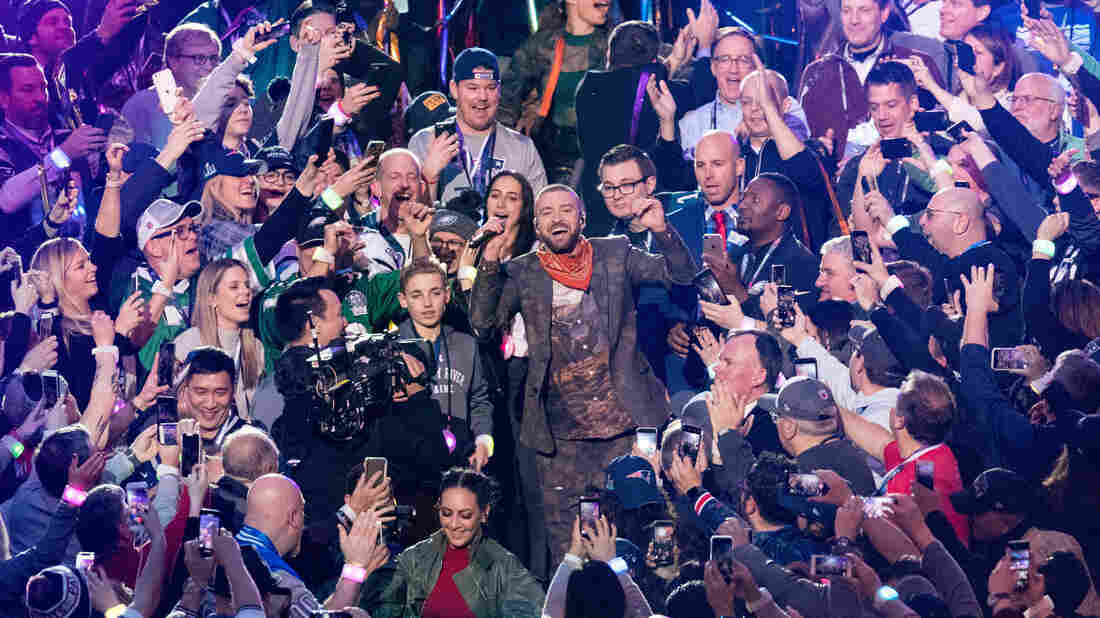 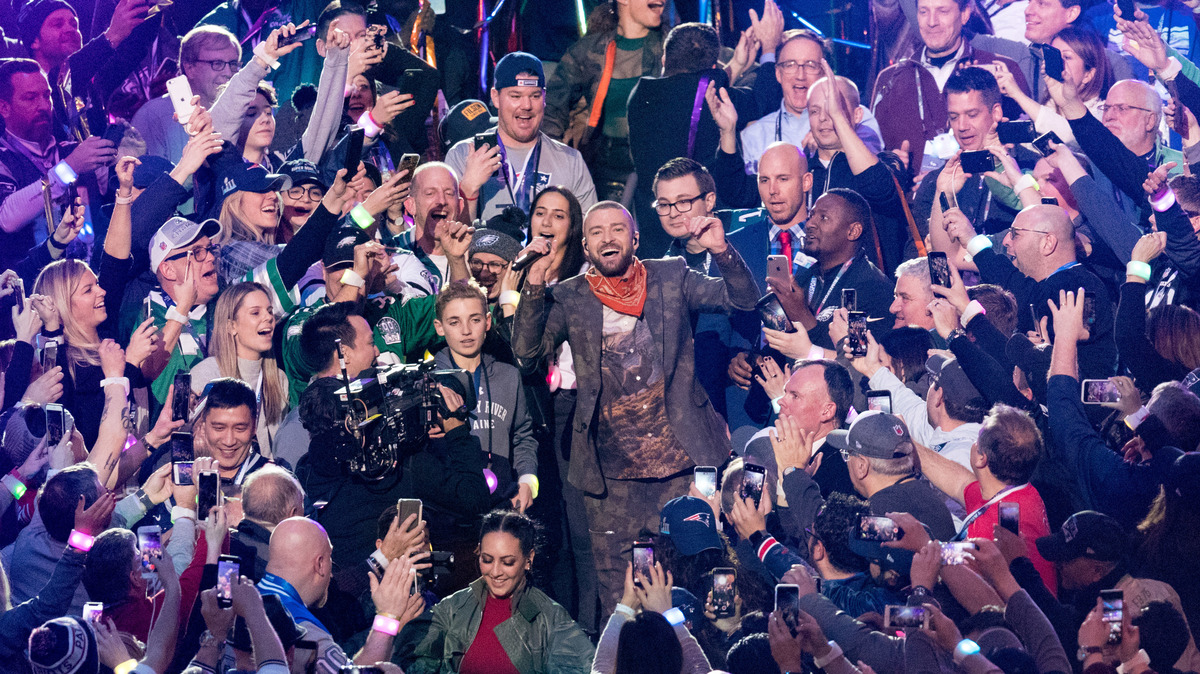 A strained "Star-Spangled Banner," a decaf flat white of a halftime show, an understated show of solidarity and, of course, the advertisements: If nothing else, Super Bowl LII's musical moments were legion. Here are the ones that caught NPR Music's ears over the course of the night.

Pink's performance of "The Star-Spangled Banner" will not go down in history as one of the best; she was ill. Proving once again that no moment of televised monoculture goes unnoticed by the digital hordes, the singer removing something from her mouth just before singing the American anthem was the subject of much discussion on Twitter, which she explained in a succinct tweet shortly after. — Andrew Flanagan

Justin Timberlake tried to create a wrinkle in time during last night's Super Bowl halftime show: Early on in the inevitable medley that structured his busy, centerless take on the hallowed spectacle, he audaciously reprised his 2002 hit "Rock Your Body," the soundtrack to the most notorious incident in the history of this savage American secular holiday. That was, of course, his fumbling removal of Janet Jackson's breastplate. It was a violation that, as even the most casual followers of pop culture know, cost her far more than it did him. Last night, as he came to the line that accompanied all that trouble back in 2004 — "Bet I'll have you naked by the end of this song" — Timberlake shouted "STOP!" and, with a raised eyebrow and a little leer, redirected the action. (Or mimed redirection: As an interview with halftime show sound engineer Patrick Baltzell recently affirmed, no band but The Rolling Stones has played live at this event.) Instead of using the brief transition to shout something conciliatory ("Respect to Janet!" would have worked), Timberlake bet on silence. It was an emblematic move for a star whose entire career has been grounded in turning challenge and conflict into Teflon cool, a singer whose songs of heartbreak are icy smooth, and whose confessions float by on clouds of multi-tracked effects.

Aesthetically and ethically, Timberlake's magic didn't take. It seemed like he'd cast the wrong spell, making himself invisible within swarms of dancers, programmed beats setting up choreography that just looked wrong for the weird Walking Dead ambience. (As many a Twitter raconteur noted, Timberlake's own ensemble made him seem like he'd raided a Bass Pro Shop.) Even when standing alone on a small stage, he seemed to want to get lost in all the action he'd set up for himself. A muddy mix buried his vocals, and even his most arresting melodies ricocheted off the shiny shards of glass and neon on the purposefully disheveled stage sets.

Prince upstaged him, too. A rumored hologram of the beloved Minnesotan did not make an appearance, replaced by a billowing sheet bearing a giant screen projection overshadowing Timberlake at the piano. Rerun the whole show at half-speed and its star's facial expressions seem to tell a sad story, with looks alternately panicked and disengaged, as if he knows that nothing short of self-immolation will spare him from a chorus of scorn from the judges who'd already sharpened their knives in review after weak review of his new album, Man of the Woods.

Timberlake's great gift is easefulness. When he was ascendant, in those heady, early 21st-century days of tech startups and easy mortgages, his feathery tenor and Fred Astaire-from-the-block dance style subdued the questions his success raised about whether a white collaborator with black producers could be anything but exploitative, and about whether endless songs about dance floor seduction might in fact be essentially coercive. In 2018, though, what people crave from popular culture is the acknowledgment of struggle. Beyonce's raised fist and Lady Gaga's ridiculous Spiderwoman leap are the Super Bowl gestures that have resonated; they felt difficult, strenuous, engaged with this very loud era of self-expression and constant public argument. Timberlake is too smooth for this moment. He doesn't own this wrinkle in time because it belongs to those who want you to see the work behind their magic, women especially, who know that underneath the flash of a show like this is flesh: the humanity that risks exposure, but which lends spectacle life. -- Ann Powers

The Eagles walk on to Meek Mill

As the underdogs heading into the game, The Philadelphia Eagles used their spotlight moment to not only highlight their hip-hop taste, but to show solidarity with Meek Mill — the prominent Philly rapper currently incarcerated for violating parole — by choosing his 2012 song "Dreams and Nightmares (Intro)" as their walk-on music.

"It says a lot that the Philadelphia Eagles are getting behind Meek Mill in such a public way," NPR Music's Rodney Carmichael said in a recent on-air segment. "For The Eagles to pick this song shows solidarity for a hometown guy with his back against the wall."

The youthful, underdog essence of "Dreams and Nightmares (Intro)" is a sharp contrast to The Patriots' signature walk-on music: the classical introduction to Carl Orff's Carmina Burana, followed by Ozzy Osbourne's "Crazy Train." (Once The Eagles had won the game, they celebrated by playing the track again and popping champagne in the locker room.) -- Sidney Madden

Super Bowl Ads 2018: The Best, The Weirdest And The Most Complicated

Much of our time watching the Super Bowl is spent ingesting advertisements. It's not news that the slots are expensive — NBC was charging $5 million for a 30-second spot. Because of that, music is incredibly useful to marketers: instantly recognizable songs can provide emotional shortcuts to the heart- and purse-strings. (When they don't go for broke on song placements, advertisers often default to plinky ukulele or classical-ish exercises, as Coke did this year.)

Here, in descending order of novelty, were marketers' attempts to grab your attention via your ear canal this year: