Accessibility links
Spotify Is, For Now, The World's Most Valuable Music Company : The Record The Stockholm-founded company has become symbiotic with the recording business, but has eclipsed any one company's value by multiples. But they all still need each other.

Spotify Is, For Now, The World's Most Valuable Music Company

Spotify Is, For Now, The World's Most Valuable Music Company 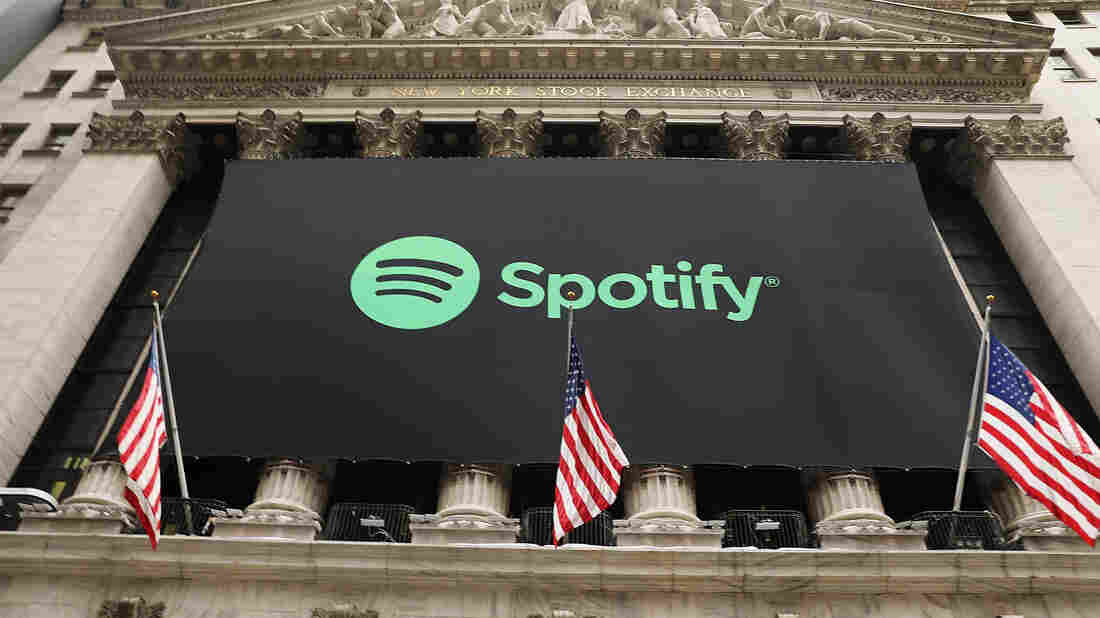 The Spotify banner hangs from the New York Stock Exchange on the morning that the music streaming service begins trading shares, on April 3, 2018 in New York City. The question now is: Where to? Spencer Platt/Getty Images hide caption 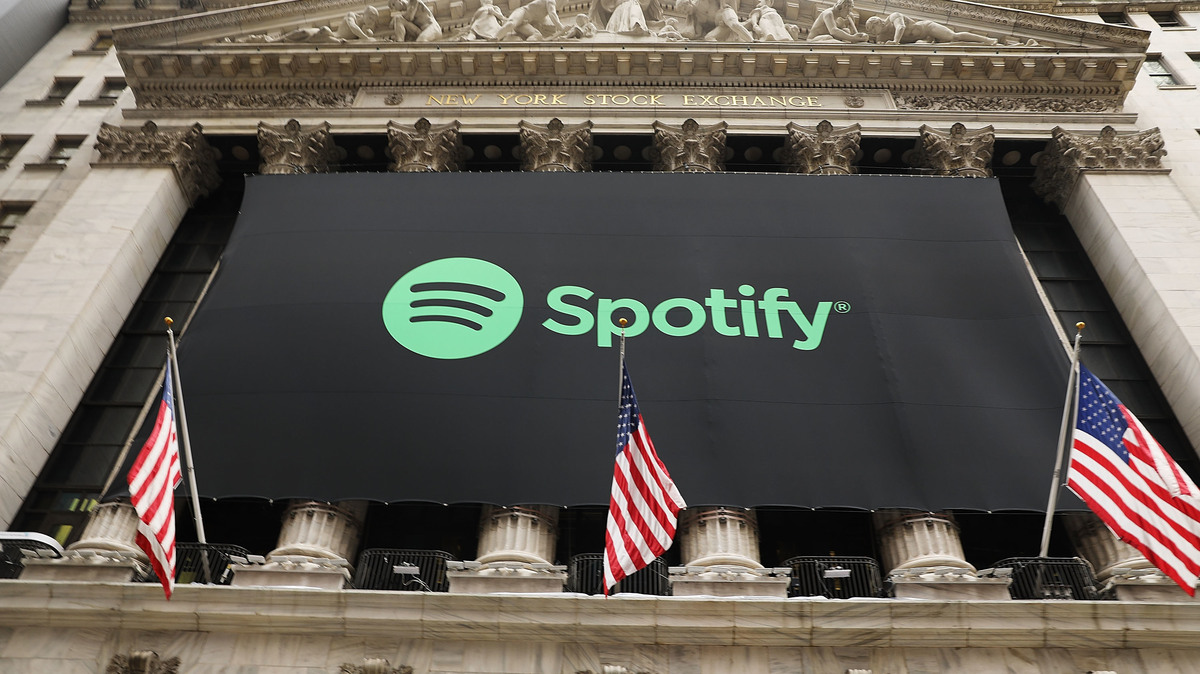 The Spotify banner hangs from the New York Stock Exchange on the morning that the music streaming service begins trading shares, on April 3, 2018 in New York City. The question now is: Where to?

Following its successful public listing yesterday, the music streaming service Spotify is now worth around $25 billion, making it the largest music company in the world — but when Spotify first débuted, back in 2008, it was reasonable to think it would fail. Headquartered in Sweden, a country whose recording industry had shrunk to a third of its previous size due to piracy, the company was located far from the Silicon Valley sphere of influence. Steve Jobs had called the streaming business model "bankrupt," and Apple was instead promoting the sale of downloadable MP3 files from the iTunes Store. Spotify, trying to exploit an exhausted niche between the pirates and the iPod, seemed a long bet.

Ten years later and paid iTunes downloads are shrinking by 25 percent a year. The founders of the Pirate Bay have all been sent to prison, and, for a new generation of listeners, BitTorrent technology is likely as unfamiliar as the fax machine. Despite its pre-eminence, Spotify still hasn't made any money, but it does have 71 million paying subscribers — and the most valuable agglomeration of listener data in the business. And Daniel Ek, its co-founder and CEO, now owns shares worth at least $4 billion (including warrants and options), making him the richest man in the history of music. Compare Ek's holdings to the size of whole companies within music: Vivendi, the French parent company of the world's largest record label, is worth around $27 billion — and is also diversified into European film and television production and distribution; Live Nation, which is so pervasive and dominant in the touring industry that the Department of Justice is reportedly investigating it, is worth around $8 billion; Tencent Music, China's dominant streaming platform, is estimated to be worth $12.5 billion.

Ek is soft-spoken, modest and polite, but he's also a 35-year old genius billionaire, whose shaved head and otherworldly affect can make him seem like the creation of a screenwriter. In correspondence with investors, he employs the sort of emancipatory Internet rhetoric that mostly went out of fashion a decade ago, claiming Spotify's ultimate goals are to "democratize the industry" and "empower artists to break through." In truth, the path to fame hasn't changed much.

"Look we talk about gatekeepers, and he's saying 'I wanna smash the gatekeepers' — but now, 35 percent of all streamed music is directly from their playlist," Portishead's Geoff Barrow, one of the few artists still willing to criticize Spotify, says. "Hell, you've become a gatekeeper! You might not think you have, but you have."

Spotify's playlist content is determined by a staff of editorial tastemakers, in combination with a suite of proprietary machine-learning algorithms, an approach to song selection that Spotify execs describe with the gruesome neologism "algotorial." With the aid of these playlists, the music industry has recovered a bit over the past two years — it's now the same size it was in 2008, when Spotify first débuted. The Recording Industry Association of America still terms this recovery "fragile," but acknowledges that streaming is the only path forward. (Streaming companies pay out over 70 percent of their revenue to various rights holders, and last year those payouts accounted for almost two-thirds of recording industry revenues in the U.S.)

From the outside, it looks like Spotify and the labels have settled their differences at the negotiating table, but underneath the two sides are still pointing guns at one another (though the safeties are now on). Spotify's weapon is its subscriber base, without which the labels will die — the labels' are their catalogs, without which Spotify can't justify charging ten bucks a month. In a round of negotiations last year, Spotify signed deals with Warner, Universal and Sony, cementing a temporary truce between the company and the majors. But this balance of power is fragile, and ultimately the two parties have different goals.

The labels need Spotify to survive, but if they permit it to grow too big, they'll lose bargaining power. They learned this lesson the hard way, during final years of the last decade, when Apple's iTunes Store dominated the legal market and recording industry revenues declined by thirty percent. In an attempt to keep the marketplace diversified, the labels have in recent years licensed their catalogs to pretty much anyone who asks, in order to spread their bets and prevent any one player from gaining too much clout.

Spotify has the opposite objective: they must be the biggest if they are going to survive. (Imagine all three companies had the same number of users: would you bet on Apple, Amazon, or the Swedish startup?) The company has been forthright about this in recent weeks, promising to invest all of the available cash flow from current subscribers — and then some — into acquiring as many new users as they can, running a loss well into the future while aiming for a market corner that won't pay off until the 2020s. This approach might sound reckless, but there are no other options. Apple Music, Spotify's main competitor, has grown rapidly since its 2015 launch, to about 40 million paying subscribers. Amazon's Prime Music service is getting bigger too, aided by the success of the Echo. Spotify cannot afford to lose its leadership position to these two companies; it can't even let them get close.

The size of their user base remains Spotify's only major advantage. More than just a source of funds, those users generate data — just like Facebook's users — that could be Spotify's most valuable asset. (In becoming a music mogul Ek hasn't made any music, just as Mark Zuckerberg hasn't been required to make any friends.) Playlists analytics capture details about listener demographics, including age, gender, and location. "You look at the geographic data from the streaming market and say, 'That's where you should tour,' " said Daniel Glass, head of Glassnote Records, a prominent independent label. "Then you go back to streaming to see if it works."

Glass has been an enthusiastic booster of Spotify — Ek is the guest of honor at the UJA fundraiser he's hosting in June— but when pressed on how, exactly, the company shared its analytic information with labels, he admitted they don't have a formal arrangement. Sharing such data out of "goodwill" is one of the subtle ways Ek keeps the music labels in check, and, the larger the data blob grows, the more the labels will be forced to cooperate with his terms. Artists, too, are forced to pander to the data, and angling for playlist spots, have begun producing what Liz Pelly called "The New Muzak." Turning music into "emotional wallpaper," these pleasant, sonically inoffensive compositions are well-suited for sunset commuting or cannabis-infused dinner parties, but you won't remember the names of any of the songs.

It may be time for the streaming skeptics to face reality: Compact discs, MP3 downloads and even piracy are all dying formats, and vinyl will never be more than the purlieu of hobbyists. In Sweden, where Spotify has been around the longest, the company now has a market share of 64 percent, and is still growing. If he can repeat this trick globally, Ek will transcend being the wealthiest person the music industry has ever seen to also become the mightiest, enjoying automatic, utility-like renewals from customers and total algotorial control over artists while running almost no financial risk. Somehow, from an office in Stockholm, he'll have managed to defeat, in order of increasing fearsomeness, the Pirate Bay, Amazon, Apple, and Taylor Swift, and the labels and musicians will have to do as he says. Someday, he might even turn a profit.