Accessibility links
My Friendship With Janka Nabay, Genius Of Bubu : The Record Over 10 years ago, the writer Wills Glasspiegel heard an album by Ahmed Janka Nabay at random, beginning a friendship that changed both their lives and helped to spread an electrifying form of music.

My Friendship With Janka Nabay, Genius Of Bubu

My Friendship With Janka Nabay, Genius Of Bubu It was 2007 and I was co-producing my first public radio show for the series Afropop Worldwide, focused on the music of Sierra Leone. A BBC reporter had loaned us a plastic bag full of tapes and CDs recently purchased on the street in Freetown. It was my job to listen through the music as research for the program we were to produce.

That was the first time I heard the music of Ahmed Janka Nabay, from a CD he released in the early 2000s in Sierra Leone called Eh Congo. I don't recall the song that I heard, only the feeling of first hearing his music — like electricity. It wasn't an introduction to a new song, but a new sound, and I was... perplexed.

Part of what stood out was how relevant his music seemed to the artistic currents flowing around me in New York City; the sub-bass and cheap keyboards fit right in to the indie music landscape of Brooklyn at the time, making it eerily, excitingly contemporary.

On "Good Governance Remix," Janka sang of women's rights and good governance, a political message that resonated in part because of the peculiar instrumentation around it – a bass line warbling like detuned keyboard flutes, catchy synthesizer melodies recalling an evening news soundtrack, drum machines that sounded like African techno. His music was off-kilter and on-beat at the same time, his singing sounded more like intonation, like chanting the Koran. Some songs sounded like they were in two different keys at once, weaving this beautiful dissonance. His tempos were bracing with a sense of constant acceleration.

Fascinated, I dug in and discovered that Janka, whom I assumed would be home in Sierra Leone, was actually living not far away, in Philadelphia. I called him, and we decided to meet in the Bronx, where there's a significant Sierra Leonean immigrant community. It was a rainy evening when we first met. I was standing in front of a shoe store waiting for him to pull up, which he and his friend did, opening car doors that were blaring Janka's music. I recognized the music and his face from the cover of Eh Congo. I got in, beginning a ride that changed my life and his.

Janka passed away this week in Sierra Leone — the result of a sudden, undiagnosed stomach illness. He had received poor medical care after living a life in poverty, and lacked access to proper medical services. He died much too young.

There was an instantaneous sense of shared joy between us, like long-lost friends brought together from half a world away by sound. Janka radiated a gleefulness, a joy that had propelled him through a life of immense struggle and poverty, right up to the moment he passed away this week at the age of 53. He never really seemed to age. 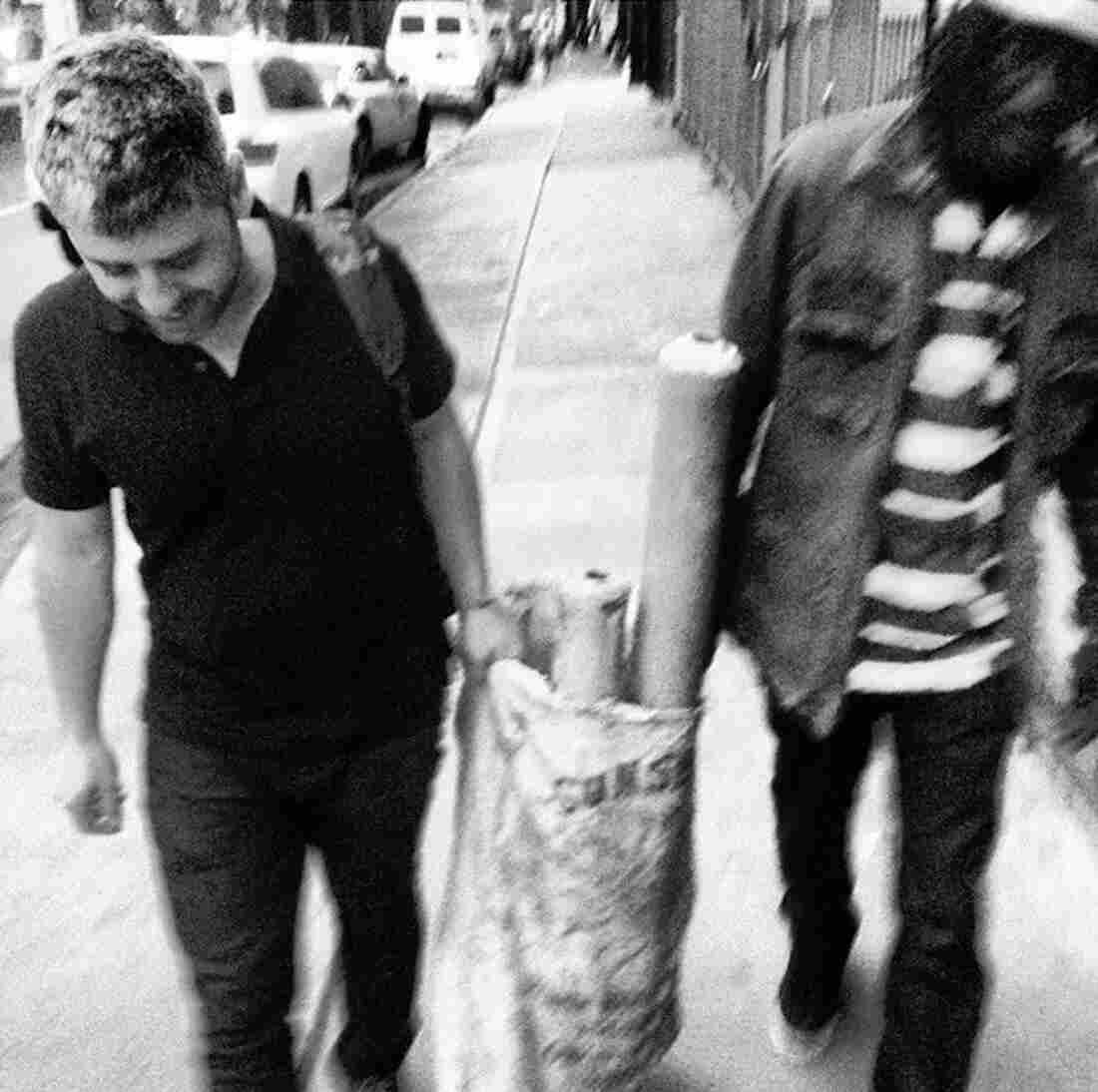 Janka was having difficulties, he explained, selling his music in the U.S. — he feared no one would believe his incredible, improbable life story: He was a musical star in his home country during the mid-'90s heights of the Sierra Leone Civil War, captured by rebels, his music appropriated as their killing anthem.

Janka told me he released six albums in Sierra Leone. He said his music was called "bubu," and that the sound was based on an ancient style played on bamboo pipes by rice farmers in the hinterlands of Sierra Leone.

I believed him, and his story became more complicated.

His music, he said, originated from his partial Temne heritage, that he spread a Temne music to all the tribes of Sierra Leone and that America was next on his list. I intuitively trusted him, and had to learn more. Not long after, I became Janka's manager and dear friend, inspired to help him spread his sounds. 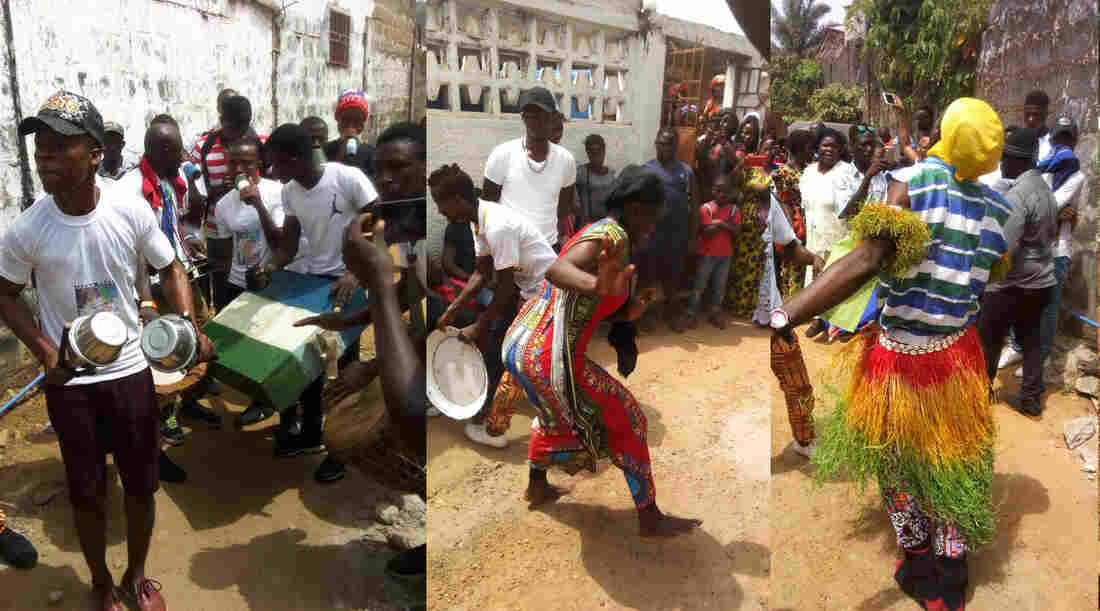 I shared Janka's album with a friend of a friend, Dean Bein, the co-founder and manager of True Panther Records. Dean loved it, and agreed to re-release Janka's music on vinyl and digital, offering Janka his first foothold in the New York music scene. Not long after, the tastemaking magazine The Fader came to my apartment for an interview with Janka, who insisted on wearing his "cultural attire" – a raffia skirt and a headband with cowrie shells embroidered into it – for a rooftop photo shoot. There he was, dancing and singing songs from a history forgotten.

The second volume of Janka's story was beginning then, the story of an emergent icon in the vibrant New York scene. His sounds bristled with political lyrics, electric instrumentation and an aura of mystery, a vision for African music in Brooklyn that was resolutely futuristic and edgy. As he continued, Janka was able to continue healing from the trauma of the civil war he fled, finding community and communion among artists across cultural boundaries.

He later signed to the New York record label, Luaka Bop, and released two new records that re-imagined bubu music for the world. Alongside his band – known as The Bubu Gang – Janka played the Getty Museum and major festivals across the U.S., and toured Europe. He collaborated with dozens of artists outside his band, as well, from Theophilus London to Sierra Leone's Refugee All Stars.

Whereas the global market for African music tends to lean towards "adult contemporary," Janka screamed on stage like he was in a punk band, writing songs that were critical of power, suffused with energy and immediacy.

After being denied citizenship in the U.S., after living here for over 10 years (obviously, a great disappointment for him) he was forced to return home to Freetown. There are tributes to Janka being recorded on Sierra Leonean radio and television, while a bubu band played his funeral, held today in Freetown.

An introduction to Janka Nabay's work

-- This website, hosted by a former Peace Corps worker, includes the only recordings of bubu I was able to find online when I first met Janka. It's not exactly bubu, but it's an associated style called "tegbe," which is also a Temne style played on bamboo pipes. Search for tegbe recordings on this page and you'll hear some of the sounds that first had me believing Janka's story about an ancient African music that had never been historicized or recorded on albums.

-- Proving the Bubu Myth is an Afropop Worldwide radio documentary that I produced in 2016, focused on Janka's life and the history of bubu music in Sierra Leone.

The final project Janka and I worked on, above, was a short film for his song "Sabanoh," which features the famous debil masquerades of Sierra Leone, which inspired Janka as a child.

One example of Nabay's early 2000s sound that knocked me off my feet was "Eh Congo." Like other Sierra Leonean pop songs dedicated to Queen Elizabeth in earlier epochs, Janka chose to praise another global political icon in this song, while urging the need for international aid during wartime in Sierra Leone. Hearing the name John Kennedy is also a point of curiosity and entry for someone in the U.S. listening to the song for the first time, finding the familiar in the unfamiliar.

"Eh Mane Ah" was a song from Janka's first album with Luaka Bop. You can hear how his sound continued to develop while he was in America, with more robust instrumentation and production. The video features Janka dancing and joking around outside the Getty Museum in Los Angeles. We often thought of Janka's music as contemporary art.

"Bubu Dub" is an example of Janka's process of continually building on old songs from his Sierra Leonean repertoire. In the case of "Bubu Dub," this beat was originally recorded in the '90s in Freetown. For the release of his newest album on Luaka Bop, Janka recorded on top of that old beat with a new melody, demonstrating how the process of creating a song can stretch decades, if not life times.

"Combination" is a wonderful song capturing Janka Nabay's spirit. I love the chorus, especially when Janka sings the word "high" in the chorus, which he sings with a paradoxically "low" bass intonation, reminiscent of the bubu flutes that inspired him. "Combination" was a song I used to hear Janka sing in my living room or in jam sessions with friends.

It expressed, lovingly, Janka's experience and vision, forged from the struggle of a civil war, and then persisting to live a positive life: "We've got to jump, jump, jump high. We've got to live in combination."

Wills Glasspiegel is a journalist, filmmaker, artist and scholar from Chicago and New York. He is currently writing about the cultural history of Chicago footwork for a PhD dissertation in African-American Studies and American Studies at Yale. He recently directed the short film I Am the Queen.