Accessibility links
A Map To The Line, And How Not To Cross It: A Code Of Conduct For The Performing Arts : The Record A collective of 14 female jazz musicians known as We Have Voice have released a code of conduct aimed at reducing harassment in spaces dedicated to the performing arts. 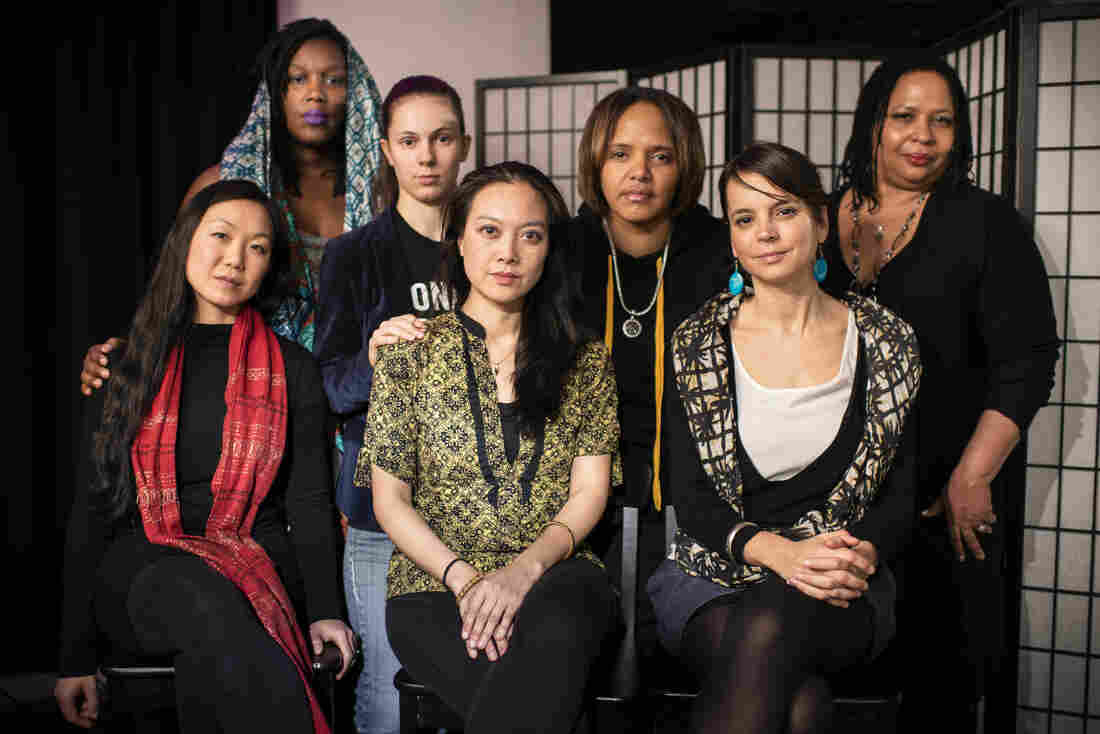 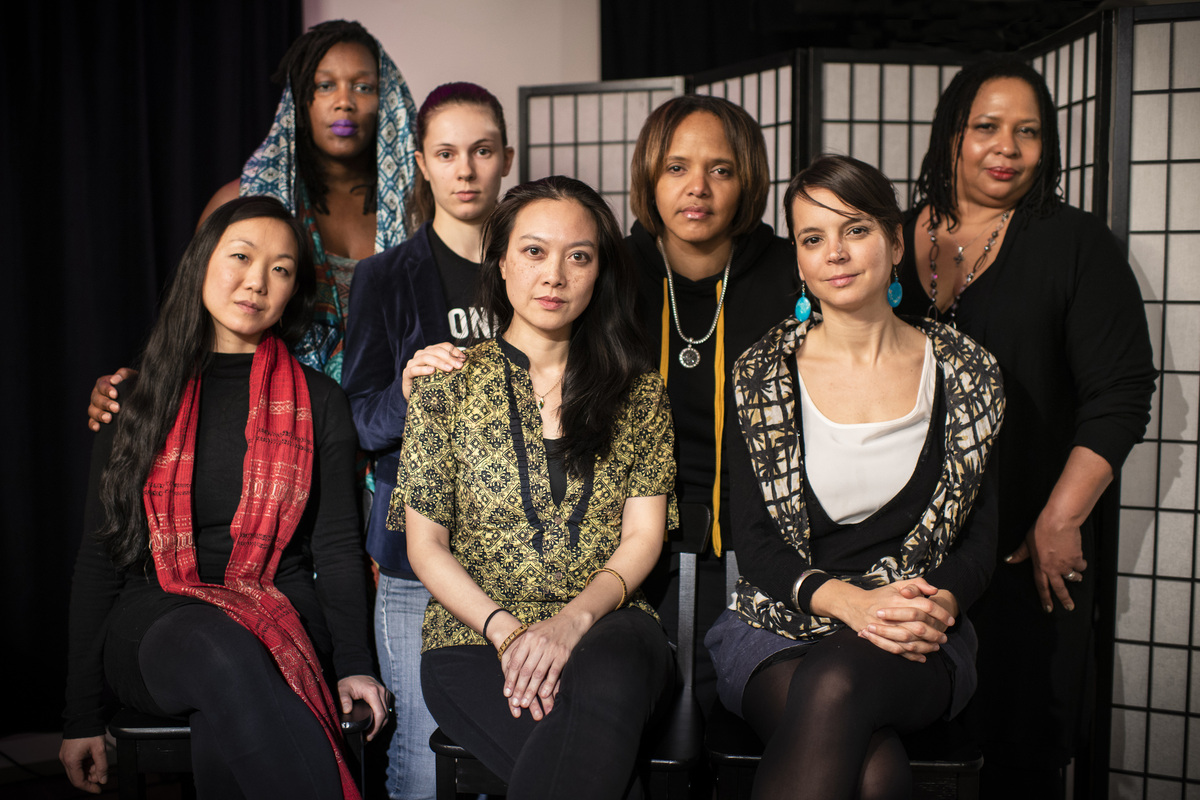 Some of the members of the We Have Voice Collective, the authors of a new code of conduct for preventing harassment in performing arts spaces. Front row, seated (left to right): Linda May Han Oh, Jen Shyu, Sara Serpa. Back row, standing (left to right): Imani Uzuri, María Grand, Terri Lyne Carrington, Fay Victor.

This past fall, when news of the Harvey Weinstein scandal was galvanizing the #MeToo movement, some of us who work in the performing arts had a peculiar experience: Colleagues started asking if they'd sexually harassed us. A few of these colleagues may have been attempting to head off allegations, but many of them genuinely didn't know if they'd crossed a line.

There are 14 musicians, all connected to the jazz world, who came together to address this concern in a specific way. They have formed a collective, calling it We Have Voice, with the purpose of sharing their priorities. Now, the group has created a document to bring attention to its mission.

At midnight (May 1), We Have Voice will release its Code of Conduct to Promote SAFE(R) Workplaces in the Performing Arts, an aspirational document that helps define sexual harassment and consent for the unusual workplaces and unique circumstances of the performing arts, offering clarity and tools for anyone who witnesses or experiences harassment. Unlike employees of formal workplaces, where human resources departments enforce harassment policies, musicians function in the uncharted territory of stages, dressing rooms, hotels, recording studios and galleries.

"This code is about protecting us in our workplaces — all of us in the performing arts," says vocalist and composer Imani Uzuri, one of the collective's fourteen members. "How we work and where we work is so fluid. We might have a rehearsal in the basement of a club or even in someone's bedroom if we're in a studio apartment. So it's all about understanding what consent is in our particular workplaces."

The notion of consent in these workplaces is particularly tricky. Instead of established management structures, performing artists work within the nebulous power dynamics of mentor-mentee and bandleader-collaborator relationships. Interactions can be particularly fraught on tour, for example, when a young musician might play in a celebrated bandleader's group at a club and then continue on to a hotel room for a midnight jam session with the band. Differences of prestige and financial clout, along with typically permissive late-night cultures, can make these hazy work/pleasure scenarios especially vulnerable to abuses of power.

By phone and email, I spoke individually with six of the 14 members of We Have Voice about the Code of Conduct. The creative music community's reckoning with harassment issues predates the precipitous rise of the #MeToo movement, stirred by some controversial statements about women in jazz from Robert Glasper in a March 2017 interview with Ethan Iverson. As essays and articles on gender discrimination in the music industry multiplied with the #MeToo movement, several women musicians discovered that, separately, they'd all been having the idea of writing an open letter.

"Some of us had already spent 20 years of dealing with the way things are in the music world," says the collective's Jen Shyu, a vocalist, composer, instrumentalist and dancer. "You say to yourself, 'As soon as I get through this it will be fine.' But we started asking, 'Why can't it just be right from the beginning?' What we saw lacking in our culture, in our creative music scene, were any guidelines for conduct."

In December, the We Have Voice collective published an open letter that expressed zero tolerance for sexual harassment, and called on peers, institutions and the greater community to create more equitable conditions in the performing arts. To date, the letter has nearly 1,000 signatures.

In early 2018, We Have Voice began painstakingly crafting the Code of Conduct via meetings, email and Google Hangout sessions, with members collaborating from the far-flung locations where they live and work. The code's "SAFE(R) spaces" is a term that espouses intersectionality, an acknowledgment that the definition of "safe" shifts according to race, class, and gender and their interdependent systems. If this sounds grimly pietistic, the We Have Voice Collective itself practices intersectionality as joyful action. Encompassing a range of ages, ethnicities (Caucasians are a distinct minority), cultural backgrounds, sexual orientations and career trajectories, the group has fostered a distinct esprit de corps.

"Everyone is a leader, and everyone truly cares about what everyone else has to say," says Shyu.

We Have Voice hopes for widespread Code of Conduct adoption among venues, festivals and summer camps, and members are also adding the clear, prescriptive set of guidelines and practices to their tour riders. "In order for it to be most effective, club owners or managers need to either make the Code of Conduct available as a visible poster, or it has to be announced before every performance," says the collective's Rajna Swaminathan, a composer and percussionist. "And it should be included in every contract with musicians, and highlighted." Organizations and spaces that sign on to the Code commit to create and promote equitable conditions for everyone who works there.

Complicating the code's adoption is jazz's entrenched notion that transgression is foundational to its culture, that the most brilliant improvisers have always discarded artistic rules and social norms. We Have Voice isn't having it.

"Jazz comes out of spirituals and the blues, and is embedded with codes of escaping enslavement," says Uzuri. "There's always been an understanding about resistance in jazz and creative music. But some boundaries are good. Transgression should never get to the point of abusing or oppressing someone else."

Anticipating the objection that a conduct code kills seduction and romance — à la Catherine Deneuve's recent denunciation of #MeToo's "puritanism"—collective members say they don't mean to take the sensuality out of the performing arts scene. "The lines can get really murky, and we understand that," says Shyu. "I met my partner through a band I was in." The Code of Conduct prohibits sexual force or coercion, not flirting and happy, consensual encounters. "People can still do what they want," affirms Uzuri. "If they want to go all freaky Friday in the club, they can, as long as they're in agreement."

Collective members are as likely to cite generous male mentors as the post-structural theory of Judith Butler, and proceed from a deep conviction that the Code represents progress for all. This inclusive vision reflects the realities of their profession: Meaningful collaboration with everyone on stage is the only way forward for creative musicians. The Code of Conduct is an important shift from exposing harassment to preventing it. While #MeToo stories have had inestimable value in revealing sexism, they've also had some undesirable side effects. "Reading about trauma affects your psyche," says We Have Voice's Sara Serpa, a singer and composer. "You can internalize those #MeToo stories, and begin to see yourself as a victim or survivor. It's not good for your life as a performing artist. That was why we started working so hard on this Code, to empower people and make a positive change in our environments."

Of course the #MeToo movement, which was started by Tarana Burke in 2006, has always involved activism, not least of all Burke's Just Be Inc., a nonprofit helping victims of sexual harassment and assault. "To me, this Code is part of a continuum," says Uzuri. "In the '90s, for example, we had Anita Hill coming forth with her work around sexual harassment. That helped more formalized spaces create a code of conduct on sexual harassment. Now we're doing the same thing for the performing arts. We're standing on the shoulders of so many other activists."

The Code of Conduct's implementation ultimately depends on self-governance within venues and organizations, but composer and flutist Nicole Mitchell believes that the code's mere introduction facilitates change. "[I]t's creating a standard for people to reach for," she says, hearkening to the aspirational ideals of Chicago's Association for the Advancement of Creative Musicians, for which Mitchell served as the first female president. "It's a way of putting something into the culture that not only inspires but challenges people to make a collective decision about their organization, to have accountability for these issues and make every effort to hold true to them."

As of May 1, Code of Conduct adoptees include a dozen venues and organizations, including Biophilia Records, the National Jazz Museum of Harlem and the Vision Festival, where all fourteen members of We Have Voice will gather in person for the first time later this month.

"The Code of Conduct is a great point of reference for organizations, artists, businesses, etc.," writes National Jazz Museum executive director Tracy Hyter-Suffern in an email. "However, it should also be springboard — a call to action. It shouldn't be passive. It's up to the entire artistic community to be deliberate in creating entrée, opportunity, collaboration and movement — and while we're at it, equal pay for feminine brilliance."

"The function of art is to do more than tell it like it is — it's to imagine what is possible," wrote feminist theorist bell hooks. It's fitting that this group of improvisers would endeavor to move feminism forward, that artists would act as architects of social change. And while we have yet to see what difference the Code of Conduct makes in the performing arts, it's already empowering the We Have Voice collective itself.

"There has always been this pattern of the woman being the only one in jazz, the only female musician in a group," says Serpa. "When you come together like this, your whole perception of other women changes. We especially want to give younger women musicians another way into the culture, another way to relate to the creative music scene."