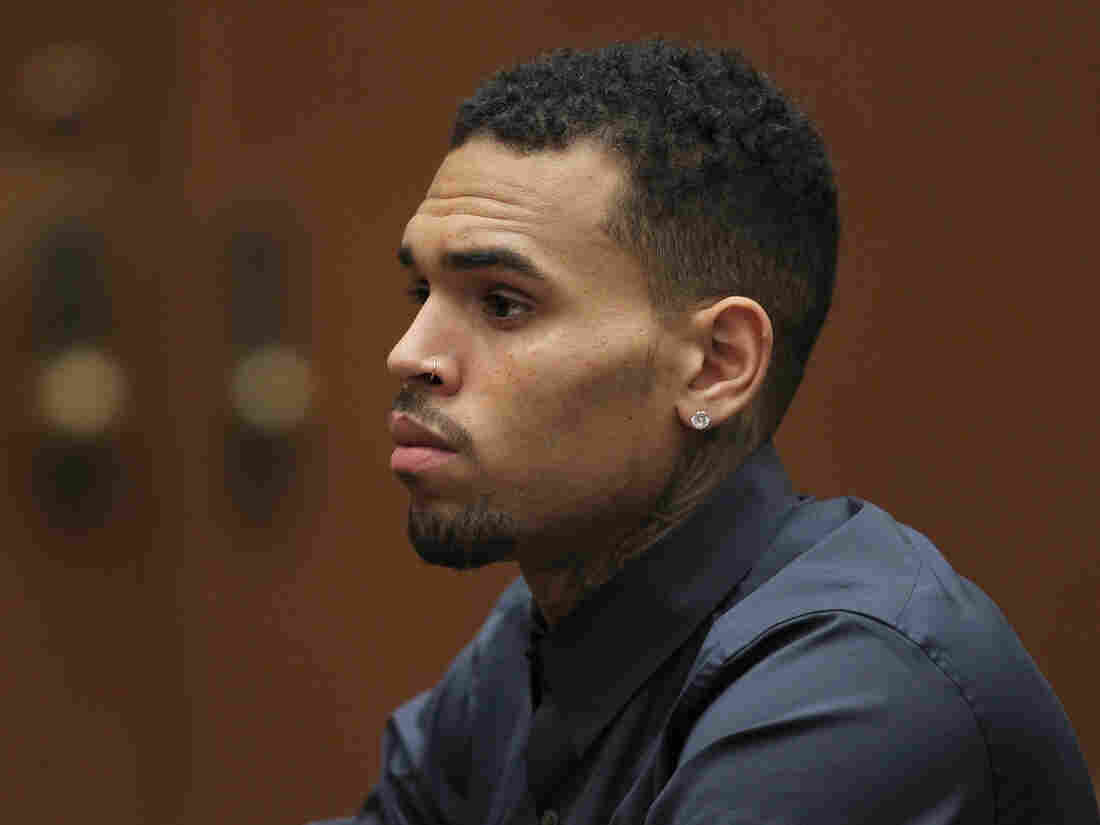 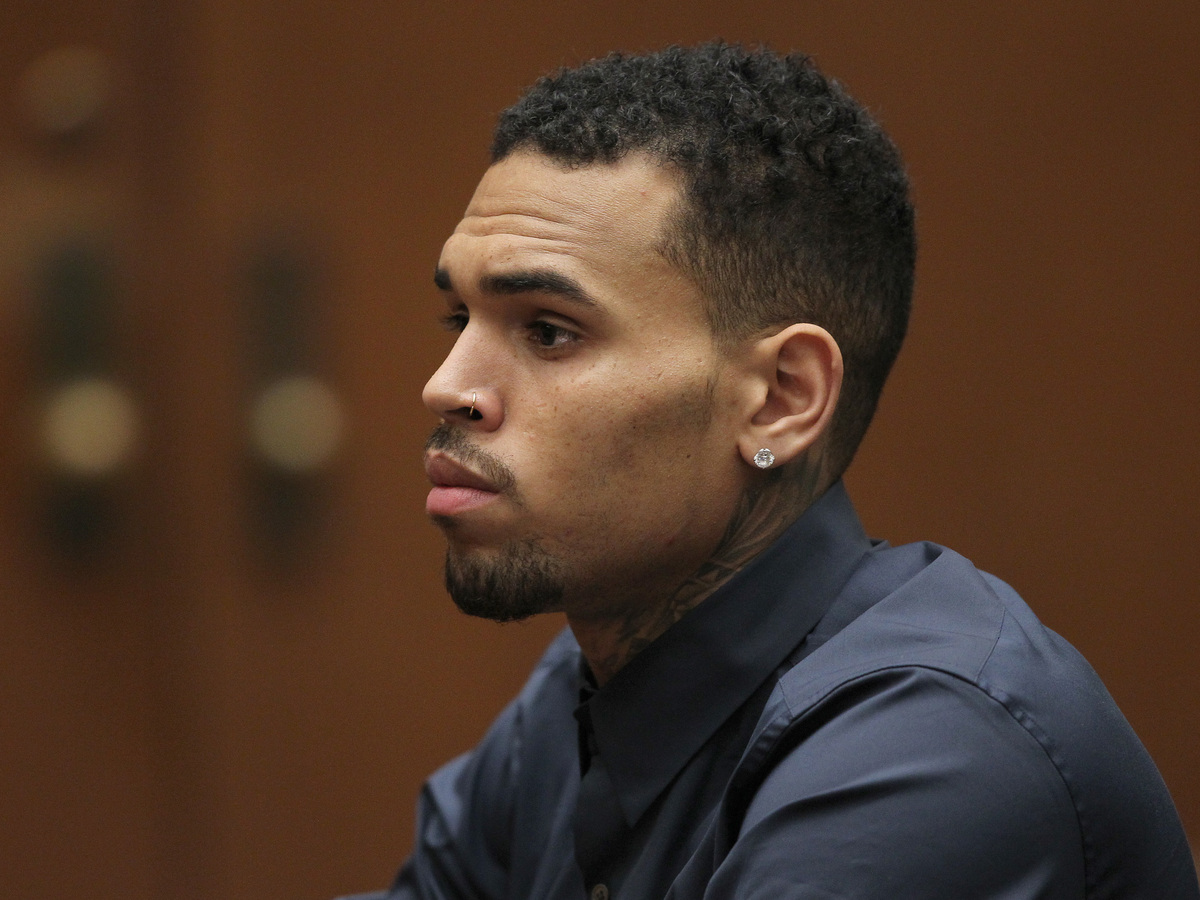 Singer Chris Brown in a Los Angeles court for a probation hearing in 2014, after pleading guilty to assaulting Rihanna.

R&B singer Chris Brown, rapper Young Lo, and an unknown woman are being sued in a civil lawsuit by a woman who alleges that she was repeatedly raped at Brown's house in Los Angeles last year.

Gloria Allred — the prominent civil rights attorney who has also represented women who have accused President Trump, Bill Cosby and Roy Moore — filed the suit in Los Angeles County Superior Court yesterday on behalf of the anonymous woman, who is being called Jane Doe.

In a press conference held yesterday, Allred called her client's allegations "one of the most horrific sexual assault cases that I have ever seen ... Jane Doe has been severely traumatized."

NPR has reviewed the court filing, in which the woman says that she was repeatedly raped, sexually assaulted and falsely imprisoned during a party at the 29-year-old singer's house by a rapper named Young Lo, born Lowell Grissom Jr., and a woman referred to as Jane Doe X, as the accuser does not know her name. The suit also lists fifty other people as co-conspirators to the assaults, also listed anonymously because the accuser does not know their names.

The woman says that the assaults took place during a drug- and alcohol-filled party that took place in February 2017 at Brown's home.

According to Jane Doe, the night started with a Brown performance at a L.A. club called 1Oak, which she attended with her then-roommate, and that the roommate was invited by Grissom to go to an after-party at a recording studio with him and Brown. She says that the roommate asked her to come along, and that she agreed.

The accuser claims that when she arrived at the studio, both her and her roommate's phones were taken away from them, and that when she wanted to leave and asked for her phone back, Grissom refused and told her that the party was moving to Brown's house. She asserts that she felt pressured to go to his home in order to get her phone back.

Jane Doe alleges that when she arrived at Brown's house, the singer gave the group alcohol and drugs, including cocaine, molly and marijuana. She also asserts that Brown handed her and other female guests a "clear pill filled with white powder," and told them to take it to "have a good time." The accuser says that she did not take the pill, and that she sat by herself, away from the rest of the partiers, hoping to be left alone. She also says that she was intimidated when she saw Brown and Grissom carrying multiple guns and also by the party's "aggressive atmosphere," and that Grissom continued to evade her when she repeatedly asked for her phone back.

In the meantime, the suit states, Jane Doe's mother became worried about her daughter, and used software to locate her daughter's phone at Brown's home; she called police and asked them to search for her daughter. According to the plaintiff, Brown refused to open the gate to police, and told Grissom and others to hide a duffel bag filled with guns. After the police left, the plaintiff asserts, Brown began brandishing a gun, which made her even more afraid. She claims that Grissom brought her roommate upstairs to a bedroom, allegedly under the pretense of allowing her to use her phone.

Grissom then allegedly came back to Jane Doe, and told her that the roommate was waiting for her upstairs. Jane Doe claims that when she agreed to go to the bedroom, Grissom and Brown closed the door and told them that they wanted to have sex with her and her roommate. Jane Doe says that she refused, but that Jane Doe X then came into the room with several other women, and that Brown ordered Grissom to push a couch up to the door so that she couldn't leave.

Jane Doe X then allegedly ordered the accuser and her roommate to undress and "hook up" with the two men, while Brown turned on a stereo and a television playing porn loudly. Some of the other women and the two men also allegedly undressed and began engaging in sexual activity. The plaintiff and one other woman allegedly refused to participate, and the accuser says that Jane Doe X then forced her to perform oral sex on Grissom by grabbing her by the throat. Jane Doe X then pinned her down on the bed and forced the accuser to perform oral sex on her while she was menstruating, while Grissom molested the lower half of her body.

Afterwards, the accuser claims that she asked for her phone yet again, and Grissom said that he would give it back, but only in the home's laundry room. She called a rideshare company, and while she was waiting for her ride, she claims, Grissom pushed her against the washing machine and raped her again before opening the gate to the house and allowing her to leave.

Jane Doe went to a rape treatment center and reported the alleged assaults to the police. According to a report in the New York Daily News, Allred says that the plaintiff has cooperated with a criminal investigation, and that she believes that the investigation remains open.

Brown has had numerous run-ins with law enforcement and has faced multiple accusations of physical assault. In 2009, he pleaded guilty to felony assault of his then-girlfriend, the singer Rihanna, and was ordered to attend a rehab center for anger management. Last year, another ex-girlfriend, actress and model Karrueche Tran, won a restraining order against Brown after alleging that he punched her repeatedly and pushed her down the stairs.

Chris Brown's management did not respond immediately to a request for comment on the lawsuit.