Accessibility links
Eurovision Returns To Glitz, Politics And Censorship : The Record Israel's Netta, crowned for the song, "Toy," marked a return to the competition's hallmarks. Although she played into the over-the-top style, the singer thanked the audience "for choosing different." 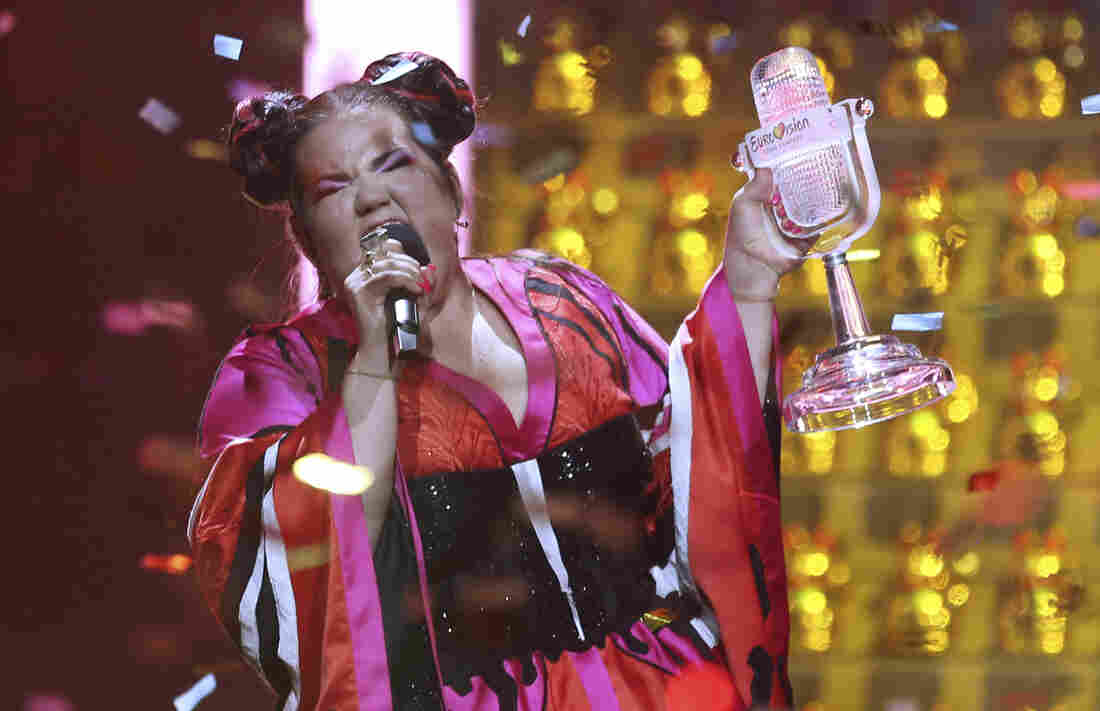 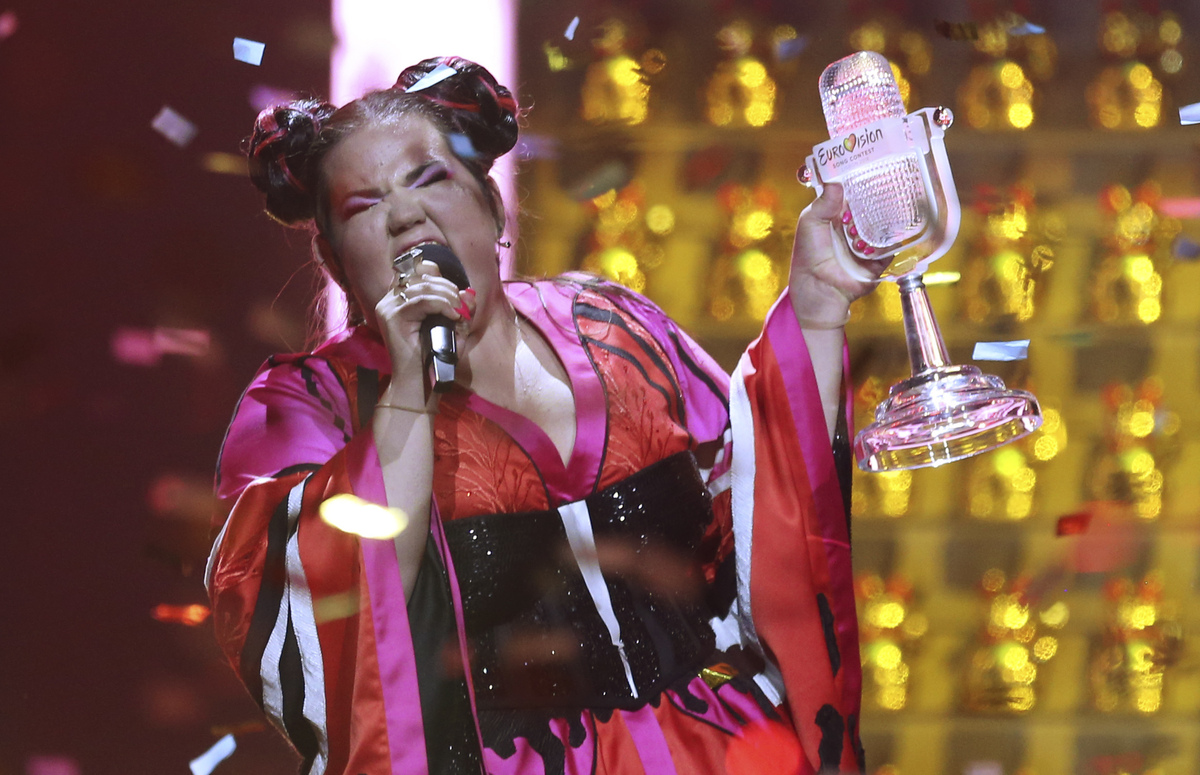 Israel has won the Eurovision Song Contest, held this year in Lisbon.

The winning song, "Toy," by Netta, was a return to the over-the-top, cheesy style that many people associate with the singing competition.

When he won last year, Portuguese singer Salvador Sobral told the crowd he hoped his victory would bring back "music that means something." He said, "Music is not fireworks, music is feeling."

He couldn't have been feeling too good, then, when he handed the Eurovision trophy to Netta.

Her song was pure pop weirdness, and the fans in the arena loved it. Sobral, on the other hand reportedly criticized the song in an interview with Portuguese newspaper Público earlier in the week.

After winning, Netta told the crowd "thank you so much for choosing different."

And different she was.

During her performance Netta was flanked by two walls with shelves and shelves of the maneki-neko cat figurine, each waving its paw.

Her backup dancers, dressed in black-and-pink jumpsuits, danced in jerky movements while making expressive faces. Frequently, both they and Netta would break out into a chicken dance, echoing a line in the song in which she appears to do a chicken impression.

Some fans of the song in the audience wore chicken hats to show their support.

While "Toy" was an early favorite to win, it felt at times like it was anybody's game to win. Strong showings from Austria, Cyprus and Sweden — paired with Eurovision's arcane and drawn-out vote reveal — meant that fans were left second-guessing their predictions as the leaderboard kept changing.

Hungarian Metal, Israeli Pop, Dancing Robots: It Must Be Time For Eurovision

After 35 Years, A New Song From ABBA Is On The Way

Aside from the glitter and pyrotechnics, it wouldn't be Eurovision without a political controversy of one kind or another.

In previous years, those have mostly involved Russia. Last year, for instance, the Russian act was banned by Ukrainian authorities from coming to the country since she had visited Crimea after Russia annexed the peninsula. This year Russia submitted the same singer, Yuliya Samoylova, but she failed to qualify for Saturday night's final.

This year, as in contests past, some of the audience booed as the Russian voting results were being read, a response to anti-LGBT policies in Russia. Eurovision has a large gay following, and rainbow flags are frequently seen in the crowd alongside national flags from competing countries.

Chinese viewers of Tuesday's semifinal would have struggled to make out those flags, though, as Mango TV blurred out rainbow flags.

China, which doesn't compete in the contest, also edited out two of the acts from the performance.

The Albanian singer, Eugent Bushpepa, had visible arm tattoos, and a Chinese regulation introduced earlier this year banned tattoos from appearing on TV.

Mango TV also cut the Irish entry, Ryan O'Shaughnessy's "Together." The song charts the decline of a relationship, and the performance is accompanied by two male dancers who are clearly meant to be the couple in the song.

In response, the European Broadcasting Union, or EBU, which runs the contest, said it was immediately ending its relationship with Mango TV, and would not allow the broadcaster to air Thursday's semifinal or Saturday's grand final.

"This is not in line with the EBU's values of universality and inclusivity and our proud tradition of celebrating diversity through music," the EBU said in a statement.

During Saturday's grand final a man stormed the stage during the aptly named "Storm" by SuRie, the British entry. He grabbed the microphone from her briefly before being quickly taken off stage. Impressively, SuRie barely missed a beat, picking up where she left off and completing the song as if nothing had happened.

Next year's contest will be held in the winning country, Israel.