Accessibility links
Weezer Covers Toto's 'Africa,' Taking Us Deep Into The Internet's Heart Of Beigeness : The Record At the behest of a 14-year-old fan who launched a Twitter campaign, the forever-game pop-punk faves have covered one of the Internet's favorite songs. The crossover is, somehow, pretty illuminating. 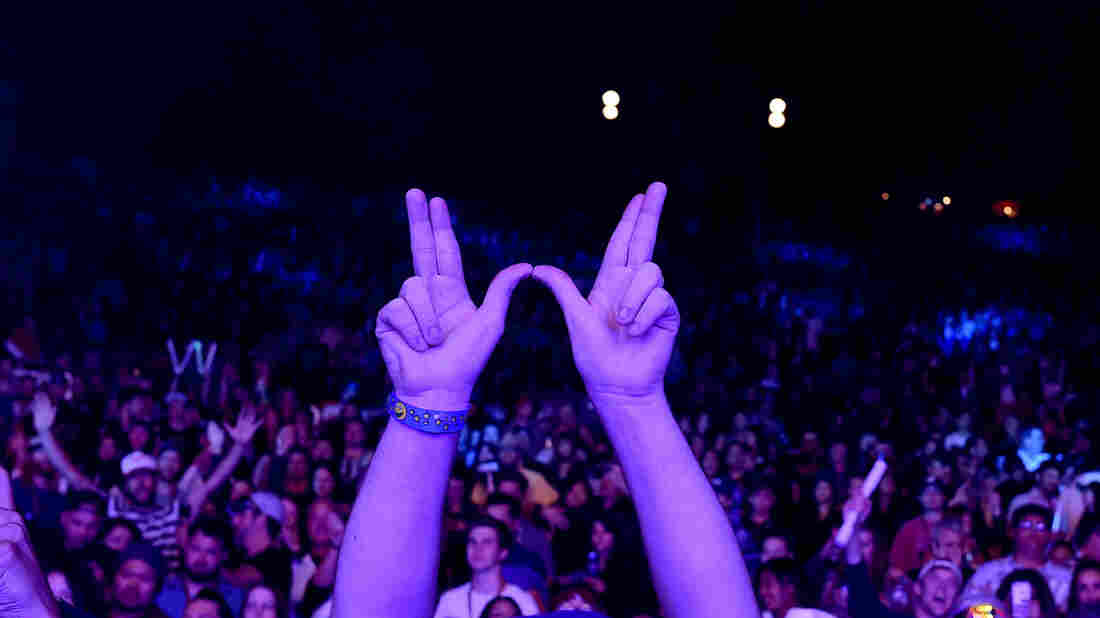 Weezer fans at the Irvine Meadows Amphitheatre on May 14, 2016, in California. Kevin Winter/Getty Images for CBS Radio Inc. hide caption 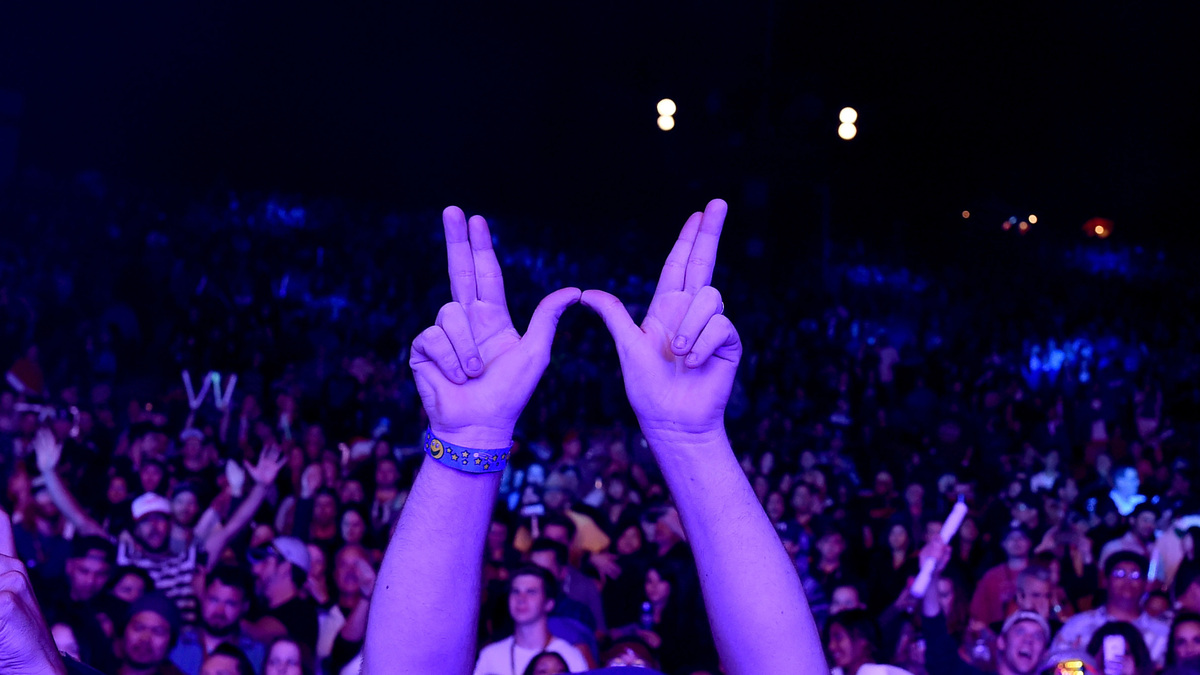 Weezer fans at the Irvine Meadows Amphitheatre on May 14, 2016, in California.

" 'When I use a word,' Humpty Dumpty said in a rather scornful tone, 'It means just what I choose it to mean — neither more nor less.' "

Why is the decision by a long-standing Southern California pop-punk band to faithfully render a hit by an even more long-standing group of ace LA studio musicians the ultimate evidence that life online has destroyed both logic and human intuition?

First, some backstory. Weezer, the Los Angeles-based quartet that emerged in the 1990s with bemusingly catchy hits like "Buddy Holly," is one of a handful of pop-punk bands that, like Wooderson in the movie Dazed and Confused, keep getting older while a good chunk of their fan base stays the same age — 14. Back in December, one such kid thought it would be funny to suggest on Twitter that the band cover the soft-rock megasmash. Why? The kid herself, named Mary, didn't know, she told a reporter who tracked her down, though she has probably come up with something by now, in that 14-year-old way rationalization follows impulse. (I know from teen logic — I live with a high school freshman who adores both Weezer and "Africa.") How did she know the Toto tune? Maybe from the Netflix sci-fi sensation Stranger Things, which featured it in a scene redolent of high school sex. Or maybe, as she implied to that reporter, she just knew it. No particular reason.

Anyway, Mary did what teens do — she set up a Twitter account solely devoted to needling Weezer, her favorite band, into covering "Africa." It was a joke, but also an attempt to make a meme, that ultimate expression of unfixed meaning, a thing people share, well, for no particular reason. Memes are funny. Not that funny but, you know, share and they become more funny. Early on in Mary's campaign, Weezer drummer Patrick Wilson responded to her, and the wheels started turning. Even though she wasn't that successful at creating a meme — her account has just south of 2,000 followers — Mary did turn an idle thought into a prime directive.

After some time in the social media spotlight and a fake-out that arrived last week — with Weezer having covered a different Toto song — the band has finally taken the bait. It was inevitable, because Weezer's music is as Humpty Dumpty-ish — as grounded in toppled meanings — as the Internet itself. Band leader Rivers Cuomo has spent a quarter century making idle thoughts into cash money on the pop charts: 1994's "Undone (The Sweater Song)" is a masterwork, the post-Nirvana answer to the Beatles' "I Am the Walrus"; and decades of subsequent hits — from "Hash Pipe" to "Beverly Hills" to "Back to the Shack" — have fed the blur of moral and perceptual confusion the band communicates. (Sometimes, as on the fetishizing "El Scorcho," the moral compass has been just plain off.) Its videos, starting with the "Buddy Holly" clip in which director Spike Jonze inserted the group into footage from the television rerun fave Happy Days, were memes before memes existed. People loved Weezer for its profligate cleverness; many hated the band for the same reason.

Toto's reputation is, in many ways, the opposite of Weezer's; more accurately, it stands for a different way of thinking about music altogether. Deeply scorned by hipster tastemakers for decades as a vapid cash-making machine, Toto has been redeemed in the Internet age by a new generation unencumbered by strict hierarchies of taste. And "Africa" is its signature — meme-makers slightly older than Mary established websites and bots in its honor. Critics (always ready for a hot take) wrote belated appreciations of the song's good-natured groove. All, however, must acknowledge that the song is at best free-associative, its music not at all evocative of the continent it claims to evoke, its lyrics dreamlike in that way that eating a large meal, perhaps at an Ethiopian restaurant, makes one dream. (Start anywhere: "As sure as Kilimanjaro rises like Olympus above the Serengeti," for example, since it's nearly impossible to see that mountain from that region.) Even those who've praised it must admit that "Africa" is deeply nonsensical. It's another version of "I Am the Walrus" — but an accidental one.

So Weezer covering "Africa" at the behest of a young teen makes perfect sense, right? Sure. But what larger story is furthered by this occurrence? What cog in the grand scheme is set right? This is where the phenomenon shows how Humpty Dumpty our Internet-driven thinking has become. It would be an event if an unequivocally great band covered an inarguably terrible song; if roundly worshipped punk elders Fugazi covered Jefferson Starship's "We Built This City," for example. That would invert taste in a tasteful way. The same thing would be accomplished in reverse if a long-scorned artist — John Mayer, who has always been critic kryptonite — covered a universally worshipped one, like Prince. Oh wait, he did. Such moments keep pop hierarchies in order by logically challenging and refreshing them.

But Weezer covering "Africa"? Here's a band that music aficionados are confused and divided about covering a song that everyone is confused and divided about. Despite the hugs it has recently earned from the hive mind, "Africa" remains utterly neutral when it comes to redefining what's "great" in pop. Unlike other critically reclaimed pop hits, it doesn't represent a marginalized identity group, or a lost moment in history ("yacht rock" has been back for more than a decade), or even the most explosive moment from the group that made it. (That's "Hold the Line." Don't fight me.) Nor is "Africa" offensive, even as an act of cultural appropriation, since it doesn't actually appropriate anything African. "Africa" is deeply, essentially, innocuous; designed to be background, it has never faded, nor — before now — ever truly surfaced as important. From the minute it was released, it was always just there. Therefore, it defies reclamation.

Weezer is in a similar position within pop history's hierarchies of taste. It doesn't own the origin story of a genre even the way Nirvana did, or as Green Day does within pop-punk. It hasn't fed its longevity with the fuel of moral integrity, as Pearl Jam has. Nobody's nostalgic for Weezer, because Cuomo has never stopped for more than a couple of years. The controversies that do plague the band, mostly about Cuomo's attitude toward women, have become dulled by the repetition of venial sins.

So does the Weezer version tell us anything new about "Africa"? We don't have a video, so there's no knowing how Cuomo would deal with the oddly oblique references to Africanness in Toto's rendering (the percussion parts, provided by guest Lenny Castro, that the synths overwhelm, and certain images in the original video, like a black woman model dressed in conservative American dress and the spear thrown at singer David Paich by a half-seen brown-skinned adversary). Comparing the recordings side by side, they're very similar. Weezer's is in a different key, has punchier drums and a bit more guitar, and a weird little keyboard solo midway. Unlike most pop-punk versions of Top 40 hits, however, this isn't a re-imagining. Cuomo lets the song pass through him rather than making it his own.

So, let's review. A band many people feel kind of weird about covered a song many people feel kind of weird about, pretty much note for note, and it's a major Internet event. People like me are even writing think pieces about it. "It's very provoking," as the egg told Alice. Might as well enjoy this tea party, bless the rains and wait for the Weezer/Toto collaboration that will undoubtedly come soon.