February 28, 2013 • Poutine, at its simplest, is french fries, cheese curds and gravy. In Chicago, 11 restaurants recently pitted their own variations on the Canadian late-night dish against one another. 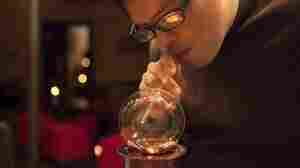 A sip or a hit? Jack Faller sucks up a bourbon Vaportini at Red Kiva lounge in Chicago. Courtesy of Andrew Nawrocki/Time Out Chicago hide caption

February 25, 2013 • Over in Chicago, cocktail connoisseurs are forgoing the liquid state altogether. Instead of drinking their favorite bourbon or infused vodka, they're inhaling it with a simple device, called the Vaportini. But don't expect these gaseous cocktails to replace liquid libations anytime soon.

February 25, 2013 • For this week's Sandwich Monday, we try McDonald's new "Fish McBites." They're basically a seafood version of their Chicken McNuggets. Or as McDonald's calls it, "tender pieces of poppable white, flaky Alaskan Pollock." 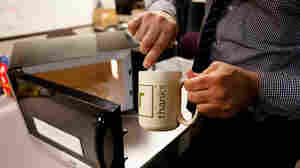 The Microwave Miracle Of Cooking In Mugs

February 25, 2013 • Didn't have time to pack a lunch? Tired of eating out? Why not cook up something in the office? All you need is a microwave, mug and basic ingredients for scrambled eggs, mac and cheese or a brownie.

The Microwave Miracle Of Cooking In Mugs 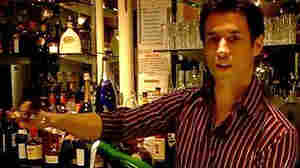 Brice from the Bubble Lounge in New York City demonstrates how to saber a bottle of champagne. About.com hide caption

February 23, 2013 • The art of sabrage, or knocking open a bottle of Champagne with a sword, probably started during the time of Napoleon. A sword is handy but not necessary; a kitchen knife can also work, according to a Champagne expert. 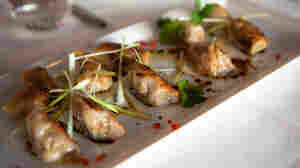 How To Make A Chinese New Year-Worthy Potsticker

February 15, 2013 • Chinese New Year began last weekend, but traditionally, festivities last another week, so there's still time if you want to celebrate by making dumplings. We bring you a visual how-to. 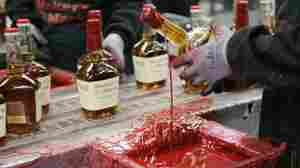 With too little distilled bourbon to meet demand, Maker's Mark is lowering the product's alcohol content from 90 to 84 proof. Ed Reinke/AP hide caption

February 11, 2013 • The distillery says it must lower its bourbon's alcohol content to meet demand. The company says consumers won't notice the change, but in bourbon country, Maker's Mark fans aren't too happy about the plan.

February 11, 2013 • For this week's Sandwich Monday, we take a break from between two slices of bread, and try a drink on Taco Bell's breakfast menu. It combines Mountain Dew, orange juice, and profound personal sacrifice.

February 4, 2013 • For this week's Sandwich Monday, we test if two great tastes really do taste great together: we try The Mac, from Cheesie's in Chicago. It's a Grilled Cheese Sandwich, topped with Macaroni and Cheese. 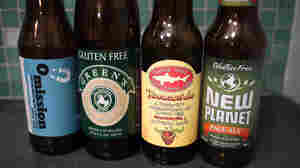 More and more gluten-free beers are entering the marketplace. We asked a librarian with celiac disease for her list of favorites. Bill Chappell/NPR hide caption

February 1, 2013 • Malted wheat and barley add flavor and heft to most beers, but they also contain gluten, making beer off limits for people with celiac disease and gluten sensitivity. For those looking for gluten-free options for Super Bowl Sunday and beyond, good news: There are more choices than ever before for flavorful, full-bodied gluten-free beer. 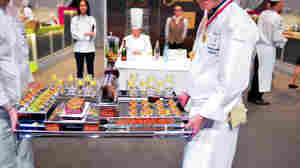 January 30, 2013 • There's one honor that's long eluded Americans at the top of the culinary field: the coveted Bocuse d'Or. This year was no exception, though Team USA made a valiant effort with an Appalachian-inspired menu that included squash, ham and mushrooms. 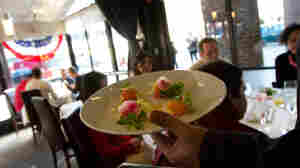 The Inaugural Food Scene In 12 Bites

January 22, 2013 • Hundreds of thousands of people turned out in Washington, D.C. for the inauguration festivities. And boy, were they hungry. We tracked down the good stuff for you in pictures. 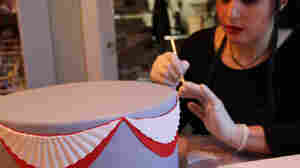 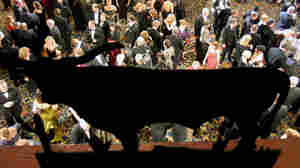 January 19, 2013 • Gearing up for inaugural weekend balls often means getting ready to stand in lots of lines for some not-so-awesome food. But if you want to say goodbye to the rubber chicken brigade, these foodcentric inaugural balls might be a better bet. 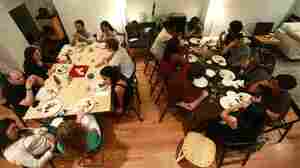 Japchae, a cooking class and Korean supper club held in 2012 in Ballston, Va., was organized through the site Feastly. Courtesy of Noah Karesh hide caption

January 15, 2013 • While underground dinners may seem like old hat to some, a handful of startups are betting the concept is just beginning to take off. But many supper clubs are still more expensive than the average restaurant meal, which may limit the market.