Accessibility links
Shining A Light On The Hidden Hardships Of Tomato Pickers : The Salt This summer, fair food activists demanded that Trader Joe's sign an agreement to pay tomato pickers higher wages. The social cost of industrial agriculture is rarely discussed even as American consumers grow increasingly discontented with how food is produced. 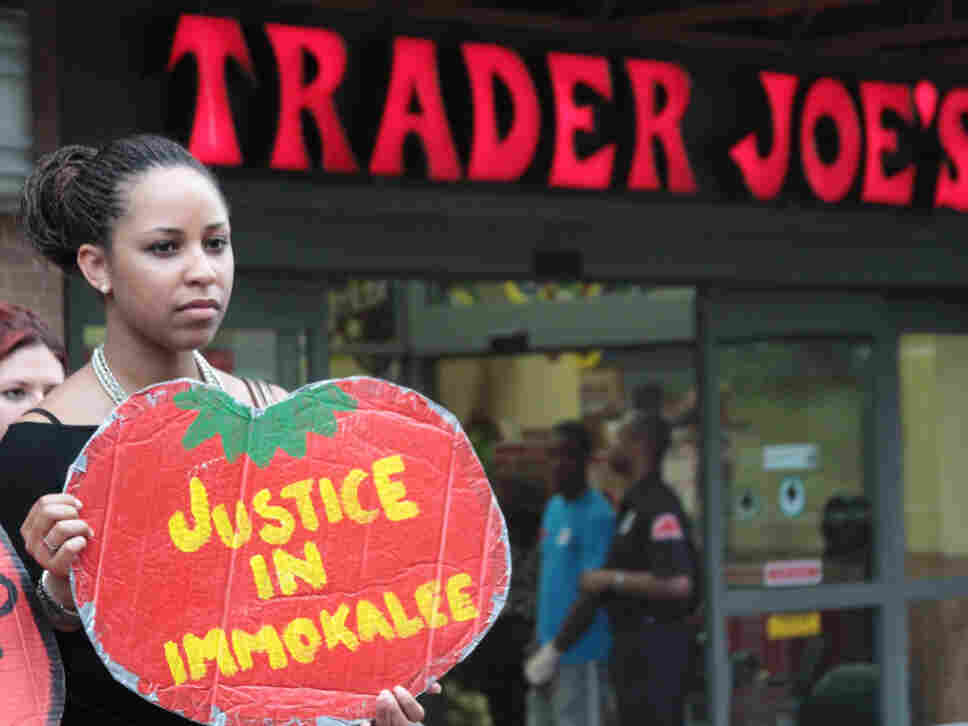 A protester outside a Trader Joe's in Washington, D.C. The Coalition of Immokalee Workers, which organized the protest, says Trader Joe's has refused to meet standards set by leaders of the fast-food and foodservice industries for a more humane tomato supply chain. Claudia Saenz/Student/Farmworker Alliance hide caption 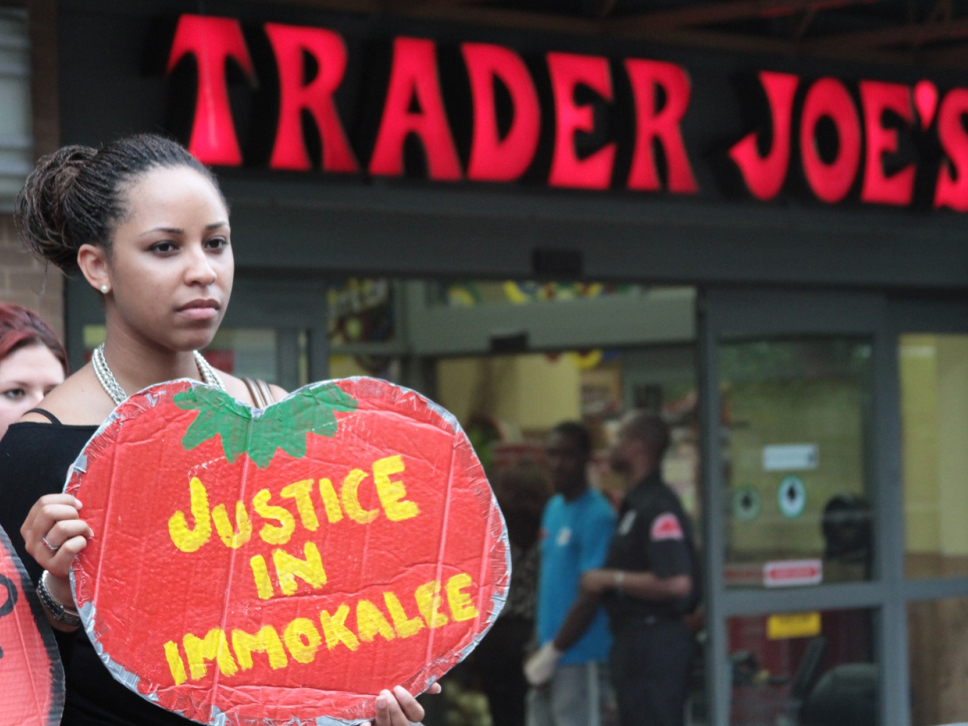 A protester outside a Trader Joe's in Washington, D.C. The Coalition of Immokalee Workers, which organized the protest, says Trader Joe's has refused to meet standards set by leaders of the fast-food and foodservice industries for a more humane tomato supply chain.

If you shopped at a Trader Joe's store this summer, you might have passed activists wielding signs in the shape of plump red tomatoes with slogans like "Trader Joe's Exploits Farmworkers." The Florida-based labor rights group behind these picket lines is demanding that the grocer pay an extra cent per pound to the tomato pickers at the other end of the supply chain.

Why? Because those workers are some of the worst treated and lowest paid farmworkers in the U.S., the Coalition of Immokalee Farmworkers says.

The coalition's tour of Trader Joe's stores was just the latest in a growing movement of labor groups hoping to make shoppers and corporations more accountable to the people who harvest their food. And a writer's recent attention to this issue may be helping to nudge it along.

The American supermarket tomato is a case study in tragedy, says Barry Estabrook, who tells its story in a book out earlier this year. Tomatoland: How Modern Industrial Agriculture Destroyed Our Most Alluring Fruit is a depressing discourse on our food system's glorification of efficiency, joining the likes of Fast Food Nation and The Omnivore's Dilemma.

While there are many reasons to lament the mealy, pinkish Florida tomatoes that flood the market every winter, Tomatoland devotes a lot of its attention to the plight of the tomato pickers, who Estabrook calls "the most abused workforce in the country."

Indeed, even as Americans grow increasingly concerned about animal well-being and the environment's role in large scale food production, the social cost of industrial food is rarely discussed. And while Estabrook praises the small, organic tomato growers who are gaining footing in the market – the familiar heroes of these kinds of books — it's the hardscrabble immigrant pickers and their organizers who emerge as the most compelling characters.

To get to know the world of the pickers, most of whom are undocumented immigrants from Latin America, Estabrook goes to Immokalee in south Florida. He learns that laborers there work in fields routinely injected with the highly toxic pesticides methyl bromide and methyl iodide. Those chemicals have been found to contaminate the air and water and are blamed for appalling deformities in the workers' children. It's also here that Estabrook unpacks a shocking case of slavery of several workers who were abused, robbed, bought and sold.

For sure, the enslavement of farmworkers is not exclusive to the tomato fields; more than 1,000 people trafficked to work in American vegetable, fruit and citrus groves have been discovered and freed since 1997, according to Oxfam America. And if you're curious, you can calculate approximately how many slaves might have been involved with producing your food with the Slavery Footprint tool, launched today.

As recently as September 2010, a guestworker recruiting company called Global Horizons was charged with operating a forced labor ring in 13 states, including Florida. Seven employees are accused of holding hundreds of laborers from Thailand, some of whom worked in Hawaii pineapple fields, against their will.

Florida, though, has the Coalition of Immokalee Workers, which as Estabrook told NPR's Terry Gross, is a "loose, grass-roots collection of people who've been working since 1993 " on behalf of tomato pickers and others. They have also become deeply involved in the nascent "fair food" movement, which is trying to improve wages and working conditions for laborers.

The coalition and its Campaign for Fair Food have had a number of big wins. Companies from Whole Foods to fast food chains to institutional food service providers like Aramark have signed its fair food agreement, which stipulates an additional penny paid to workers for every pound of tomatoes picked. Four supermarket chains, however, continue to resist, including Trader Joe's.

In an email, a company spokesperson named Nicki K. told The Salt that the agreement CIW wants the company to sign is "overreaching, ambiguous and improper." For more on Trader Joe's reasons for rejecting the agreement, see its note to consumers, posted in May.