Accessibility links
'Biggest Loser' Nudges Many Viewers To Think Thin : The Salt More than half of the people in a recent poll say weight-loss shows influence what they eat. And 49 percent say they believe the television programs will have a positive influence on the obesity epidemic. 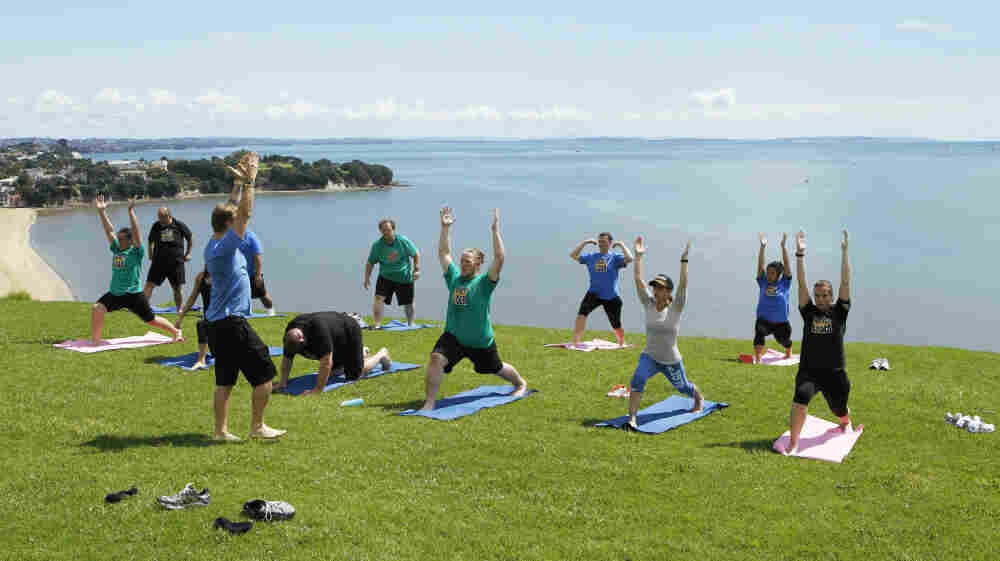 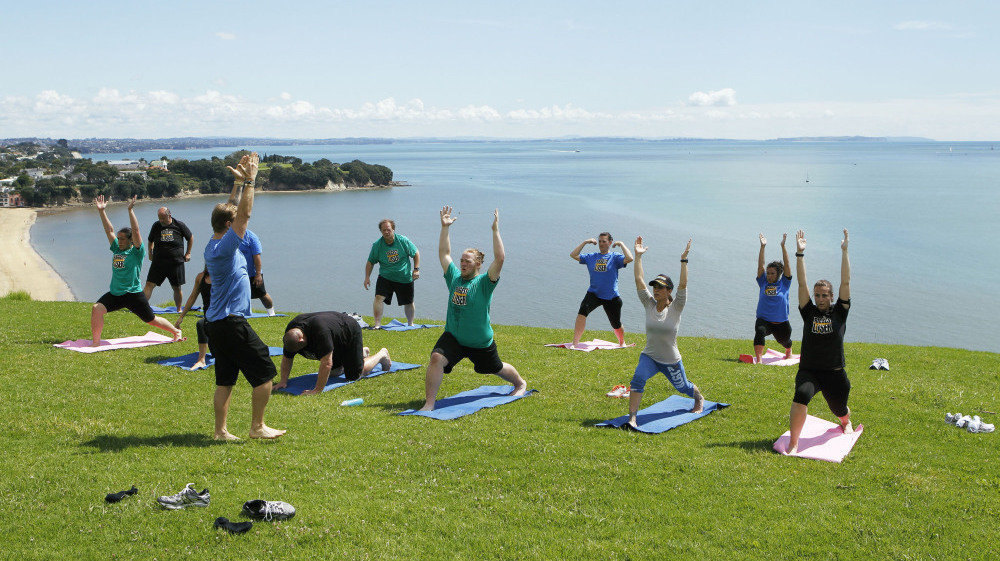 Contestants from NBC's "The Biggest Loser" do yoga in Auckland, New Zealand.

Contestants on the Season 12 Premiere of TV's The Biggest Loser last night may not be the only people motivated to lose weight. Viewers are influenced by weight-loss reality shows, too.

In a soon-to-be published Thomson Reuters poll of 3,000 Americans, 57 percent of people say weight-loss shows have influenced what they eat. And 49 percent say they believe the television programs will have a positive influence on the obesity epidemic.

That's not a big surprise, says David Just, a behavioral economist at Cornell University. "TV is a socialization tool," he says. "It's a window into what everyone else is doing."

Lifestyle habits tend to be social. If people around you are working out at the gym all the time, then exercise is likely to seem normal, explains Just. And if everyone on TV is losing weight, this may become the new norm — or at least the new goal.

"It makes you feel like: If they can do it, I can do it," says Season 11 Biggest Loser contestant Marci Crozier of Valparaiso, IN. She lost more than 75 pounds during the season she appeared, and so far, she's kept her goals.

The survey is just a snapshot in time. It's not clear whether the aspirations of losing weight and exercise will materialize into long-term lifestyle changes. But it's clear that those who are watching are mostly individuals who could benefit from the change. Seventy-three percent of respondents who say they've been influenced by reality weight-loss shows admit they are either overweight or obese, according to the poll.

"These TV shows have allowed people who are remarkably overweight to see that it is possible to get all the way back to a normal weight," says Ray Fabius, chief medical officer with Thomson Reuters Healthcare who consulted on the poll. "That's the greatest potential influence of these shows," he says. In addition to "Biggest Loser," the survey also asked about two other reality weight loss series including workout maven Jackie Warner's Theintervention on Bravo and MTV's I Used to be Fat.

Besides influencing the most overweight viewers, the poll shows that people with lower incomes are more likely to be hooked by the message of the weight loss shows. Sixty-eight percent of respondents with income of $25,000 a year or less reported that the shows were influential. This figure dropped to 53 percent for individuals with an annual income of over $100,000.

That may be because wealthier people have better access to weight loss resources, says Just. They may get help from doctors, health advisors or even personalized trainers.

Regardless of your weight, these weight loss shows are filmed in a way that makes you instantly connect with the contestants' stories, get emotional, and root for them. I know I do.