Accessibility links
Zebra And Cattle Make Good Lunch Partners, Researchers Say : The Salt In Africa, some ranchers shoot wildlife to keep them from eating the grass out from under their cattle. But it turns out some wildlife, like zebra, actually help cattle graze — by clearing fibrous grass stalks away and promoting the new shoot growth that cows crave. 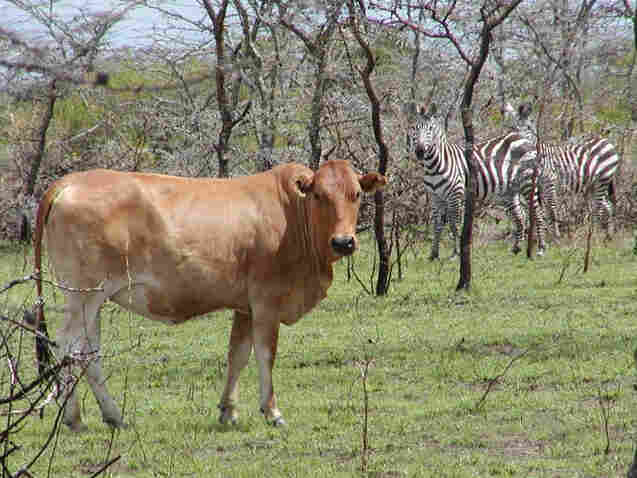 Cattle and zebra share a meal in a pasture in Kenya. Ryan Lee Sensenig/Science hide caption 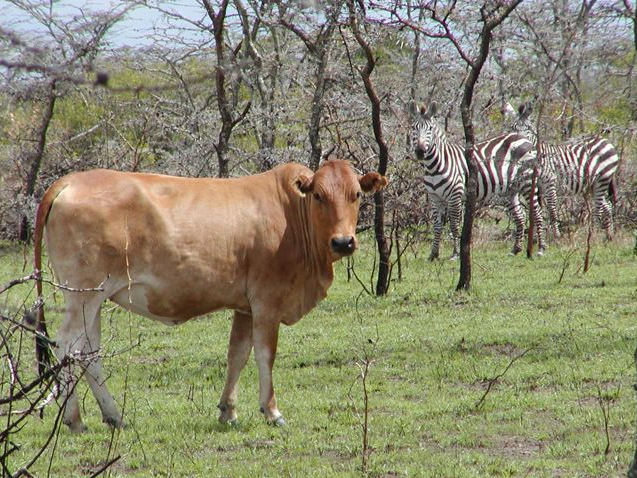 Cattle and zebra share a meal in a pasture in Kenya.

Those of us who eat beef can thank cattle for turning grass into something tastier. But grass is not always easy to come by, especially in Africa. And without grass, where's the beef?

That's a big deal in Africa, where there's something of a range war going on — cattle versus just about any other grazers running wild: Oryx, buffalo, hartebeest, gazelle, and especially zebra. Conventional wisdom is that the wildlife eat the grass out from under the cattle. So some people shoot the wildlife, which is one reason wildlife numbers are crashing in much of the continent.

Ecologist Wilfred Odadi of the African Wildlife Foundation says he and his colleagues found that when cattle grazed shoulder to shoulder with zebra, the cattle actually gained more weight than when they dined alone. No doubt they also had more fun, zebras being somewhat more frolicsome than cows.

Here's why zebra make good dining companions: In the wet season, grass grows fast and soon gets tall and "rank." Basically, it gets fibrous and unappetizing to cows, says Truman Young, an ecologist at University of California at Davis. He's a grass guy; when he looks at a cow, he actually sees grass.

"What the zebra do is, they lop that (shoot) off," he says. "That encourages the regrowth of fresh shoots from the base, and those fresh shoots are just more edible. It's like having the choice of having bran muffins or blueberry muffins, I guess."

But, a note of caution. It only works this way in the wet season. In the dry season it's dog eat dog — and the zebras do eat the cattle's lunch.

Still, scientists say the research, which appears in the journal Science today, could help ranchers manage cattle and wildlife together, to their mutual benefit. And it might even work in the U.S.

Johan du Toit, an ecologist at Utah State University, is trying the same experiment with cattle and wildlife in the Utah plains – you know, where the buffalo roam, and the deer and the antelope play. His encouraging word: "It's worth a try."