Accessibility links
How A Small Red Fruit Performs Taste Miracles For 'Flavor Trippers' : The Salt Japanese food chemists have found a way to explain how a chemical in miracle fruit makes sour flavors taste sweet. The fruit has inspired a small counterculture of flavor trippers as well as chefs who are experimenting with the chemical as a low-cal sweetener. 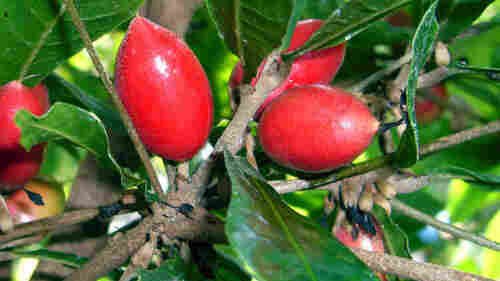 The miracle fruit from West Africa has a chemical that binds to and boosts sweet taste receptors in the presence of acidic foods. Courtesy of Keiko Abe hide caption

A tiny crimson berry from West Africa discovered by Westerners almost three centuries ago can turn lemons into lemonade and vinegar into apple cider, at least as far as the tongue is concerned.

The chemical miraculin in "miracle fruit," as the berry is known, makes sour things eaten immediately afterward taste sweet, and sweet things taste super sweet. And it's inspired a small counterculture of "flavor trippers" who get together to swirl it (or a tablet containing it) around on their tongues and then sample a parade of foods to showcase its mind-bending qualities.

But how it works, and, more importantly, how it might go from cool party trick to potential weapon against obesity, was little understood, until now.

In a paper in the Proceedings of the National Academy of Sciences, a group of Japanese chemists explain how exactly miraculin hijacks taste buds.

Keiko Abe, a professor of biological chemistry at the University of Tokyo and the lead author of the paper, says miraculin binds tightly to sweet taste receptors and then pushes them into high gear only if pH in the mouth starts to drop into the acidic range from something sour — like when you eat an unripe strawberry or a lime. Miraculin's bind is so tight that the effect lasts for 1 to 2 hours.

Miraculin's influence over sweet receptors is so great, it turns out, it can even push other sweet tastes out. "When other sweet substances exist together in the mouth, it is likely that miraculin almost monopolizes the sweet taste receptor," Abe tells The Salt.

The first time she ate the fruit in 1989, Abe says, she was "surprised and excited" by the fruit's power — so excited that she dropped what she was working on to investigate miraculin.

But Abe is far from the only one caught in miraculin's honeyed vise. A number of chefs have also been experimenting with miracle fruit, both to entertain diners and help diabetics and the under-nourished.

In Boston, Chef Eliana Hussain at the Cambridge School of Culinary Arts designed a flavor tripping menu earlier this year for Mystery Meet, a group of adventurous diners. Seth Resler, its founder, says the eight-course menu included dishes such as citrus salad with mint and yogurt and a kooky combination of shrimp and strawberries.

"It was unusual," Resler says. "The strawberries tasted like they were dunked in powdered sugar, while the shrimp didn't taste different. The best thing to do is try everything before and after, because the flavors can change a lot in just an hour."

Chicago chef Homaro Cantu, co-host of the Discovery Channel's Future Food show, has also taken a liking to miracle fruit. He and pastry chef Ben Roche are working on a miracle berry diet book with desserts that contain no sugar, Wired reports, and feature it at their newest restaurant, iNG.

They also say it could be used to fight hunger by making nutritious but unpalatable plants, like grasses, taste good to people who have trouble growing or buying other kinds of food.

Japanese food chemist Abe agrees that miraculin could be put to work outside of the flavor tripping world. It could be a non-calorie sweetener for patients with diabetes, obesity and other metabolic syndromes, she says.

But for all these good intentions, price might be an obstacle. Mberry, one company that's trying to cash in on the miracle fruit rage, charges $42 for just 10 fresh berries (shipping included). That, sadly, is no miracle.