Accessibility links
Pricier PB&J's In The Forecast, Thanks To Peanut Shortage : The Salt High cotton prices and bad droughts have conspired to create conditions that have caused a national peanut shortage. Consumers like Jennifer Rice will have to pay more to put peanut butter sandwiches in the lunchbox. 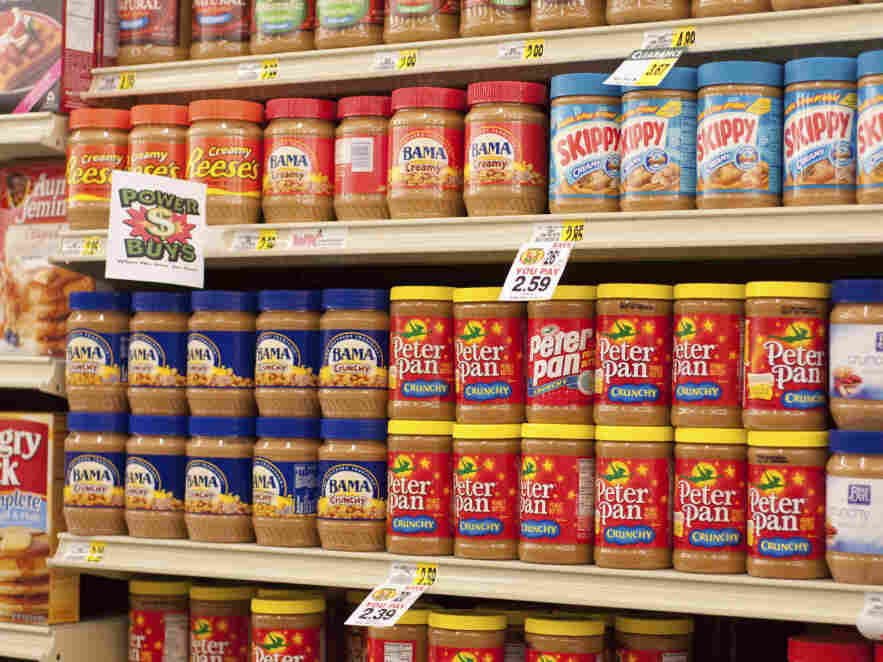 How much you are willing to pay for your favorite sandwich? If it has peanut butter in it, you may soon be recalculating. A looming shortage of U.S. peanuts is causing the price of peanut butter to soar.

"We have quite a peanut shortage this year," says Tiffany Arthur, an agricultural economist at the U.S. Department of Agriculture's Farm Service Agency — the folks who make emergency loans to farmers. "Things are snowballing and prices are sharply rising."

Peanut butter manufacturers have shelled out more money this year for peanuts, almost double what they paid last year. Arthur says this is the highest she's seen the price of peanuts. And it boils down to a couple of reasons: drought and the price of cotton.

Peanut broker Richard Barnhill says this has been one of the roughest years for peanut farmers. "Probably the first thing that happened was cotton prices were very high, which was very attractive to the farmers. So our first problem was [that] we didn't plant enough peanuts," Barnhill explains. Basically, he says, they swapped peanuts for cotton.

"The second factor that happened was we have not gotten the rain," Barnhill explains. "We're in a La Nina [weather pattern]: hotter and drier in the Southeast and in the Southwest."

Season begins in August of year indicated and continues until July 31 of the following year.

For this reason, many of the peanuts that farmers did manage to get in the ground did not survive the drought conditions. Some of those that survived were struck by crop diseases, making them unfit for food.

The shortage won't just hit snack giants like Jif. Popular grocery chain Trader Joe's, which makes its own line of organic peanut butter, has discontinued it. When it does eventually hit shelves again, you'll pay about 70 cents more per jar, according to Trader Joe's Director of Public Relations Alison Mochizuki. But that won't be for a few weeks, the company says.

The shortage also comes at a tough time. Peanut butter consumption has jumped by 10 percent since 2008. Usually, it goes up just 1 or 2 percent in a regular year, says Arthur of the Agriculture Department.

Arthur says it has to do with the economy. "Typically you see peanut consumption increase during times of recession," she says.

That's because traditional protein sources like meat are more expensive, so some consumers are turning to a more shelf-stable high-protein meal.

Arthur and Barnhill say there's no need to panic, but be prepared to pay more. And consider this: In Georgia alone, the crop will be 30 percent smaller this year, according to John Beasley, a peanut agronomist and extension specialist at the University of Georgia. That's potentially 3 billion fewer peanut butter sandwiches in American lunchboxes.

Parents like Jennifer Rice of Missouri might feel the pinch. Her sons sit on stools around an island in their kitchen after soccer practice, chanting "peanut butter jelly time" as they wait for their snack. Their father, Tom, opens a big jar of his favorite brand, Jif, which takes 540 peanuts to produce.

"Peanut butter to us means breakfast together on Saturday morning," Jennifer says.

But is a price increase enough to make Rice put peanut butter on her shopping blacklist?

"It's hard to put a price on what kids will eat," she says. "We probably wouldn't consider it if it were, like, $10 a jar, because that would be like buying caviar. I don't know: Even then we might consider it as long as the kids ate it."

Jessica Naudziunas reports from Missouri for Harvest Public Media, an agriculture-reporting project involving six NPR member stations in the Midwest. For more stories about farm and food, check out harvestpublicmedia.org.