Accessibility links
The Pawpaw: Foraging For America's Forgotten Fruit : The Salt The pawpaw is a tropical-type fruit native to North America with a long and almost forgotten history. Thomas Jefferson once prized it, and now scientists are looking at whether the pawpaw can claim some health benefits, along with cachet. NPR's Tiny Desk Kitchen goes on the hunt for this tasty treat.

Tiny Desk Kitchen: Ever Had A Pawpaw?

So what the heck is a pawpaw?

Recently, I heard about a secret snack. Kayakers who paddle the waters near Washington, D.C., told me about a mango-like fruit that grows along the banks of the Potomac — a speckled and homely skin that hides a tasty treat.

A tropical-like fruit here, really? Yep. It's the only temperate member of a tropical family of trees. You can't buy the pawpaw in stores, so for years, the only way to eat them was straight from the tree.

I was intrigued. So I decided to hunt for a pawpaw myself.

D.C. nature guide Matt Cohen showed me how to find them.

We took the Billy Goat Trail on the Maryland side of the Potomac River. "Wow," was the first word out of my mouth when I tasted one we found on our hike. It's sort of mango-meets-the-banana ... with a little hint of melon.

Although you may not have heard of it, the pawpaw has quite a history. Thomas Jefferson had pawpaws at Monticello. And when he was minister to France in 1786, he had pawpaw seeds shipped over to friends there. He probably wanted to impress his friends with something exotic from America.

Lewis and Clark wrote in their journals that they were quite fond of the pawpaw. At one point during their expedition in 1806, they relied on pawpaws when other provisions ran low. And from Michigan to West Virginia, people have even named towns and lakes after the pawpaw.

But the pawpaw has only recently been commercialized. That's one reason you don't see it in the grocery store. So far, there are just a few orchards selling to farmers markets. This progress is largely thanks to the work of plant scientist Neal Peterson.

He has spent the past 35 years breeding the pawpaw to make it look and taste more like a fruit we'd buy. He has selected and grown varieties that are bigger, with more flesh.

After tasting his first wild pawpaw 35 years ago, he had a eureka moment.

"It was just a revelation," he says. Peterson thought that the pawpaw was every bit the rival of a perfect peach or apple — fruits that have had thousands of years of breeding.

Why hadn't someone done this with the pawpaw? "I could just instantly make that leap of imagination," he says. 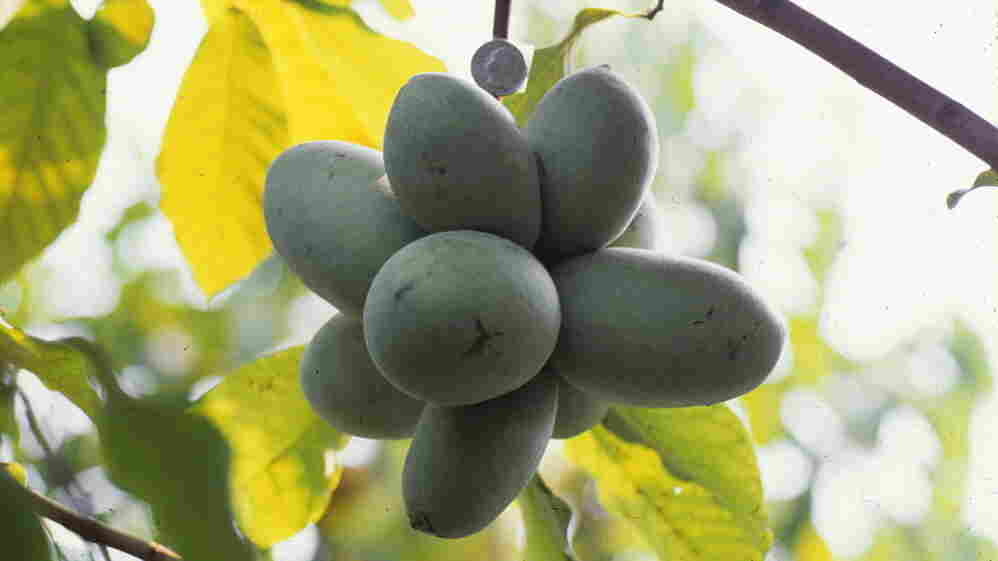 Plant scientist Neal Peterson has documented pawpaws extensively — both wild varieties and his cultivated versions. This photo from the 1990s shows a cluster of fruit hanging from a tree. Courtesy of Neal Peterson hide caption

And some three decades later, he has a lot to show for it. His pawpaws are being grown in a few orchards and sold at farmers markets.

And now it's moving beyond novelty. A food scientist at Ohio University, Rob Brannan, is interested in studying the nutrients in the pawpaw. So far, he has published one study that found the antioxidant count in the fruit to be pretty high.

"It's about the same as a cranberry" or a cherry, Brannan says.

If scientists could put a "health halo" over the pawpaw, Brannan says, it would give the fruit a commercial boost. It's happened before. Pomegranate juice, anyone?

"Yum — wonderful flavor," Joan Foster said after tasting her first pawpaw at the Olney Farm Market recently. She has been waiting a long time to try one. They're only available a few weeks out of the year — and this year's pawpaw season is just about over.

So if you're intrigued, come back again tomorrow for a few tips on where you can find pawpaw beer, pawpaw sorbet ... and pawpaw recipes.