Accessibility links
Sesame Street Tackles Child Hunger, One Muppet At A Time : The Salt It's no surprise that Sesame Street is tackling a tough issue. It's been doing that from the start in 1969. Just in the last year, the show has featured a story line where a parent loses a job, and another on parent death.

Sesame Street Tackles Child Hunger, One Muppet At A Time

Sesame Street Tackles Child Hunger, One Muppet At A Time 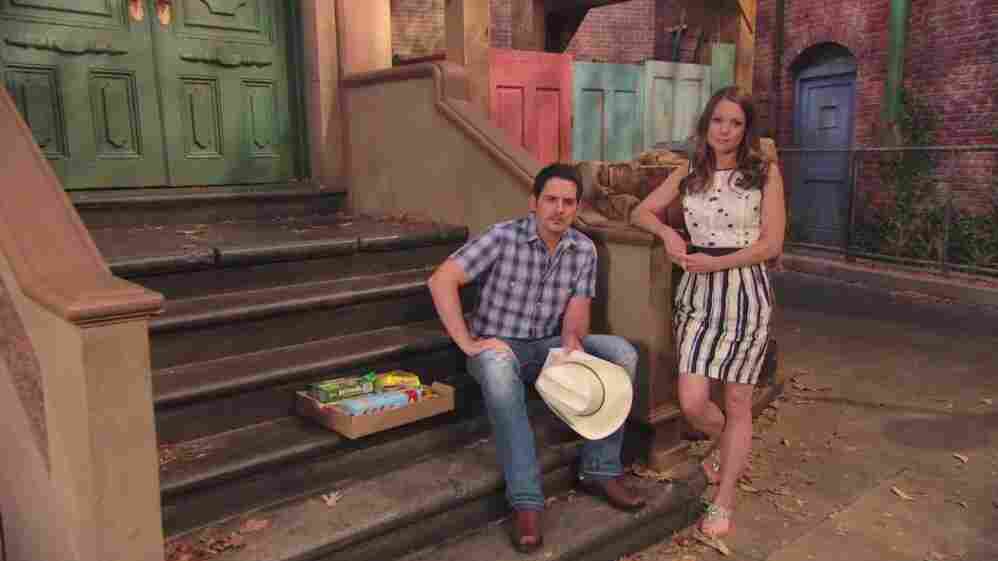 There's a poignant moment right at the top of Sesame Street's new prime-time special, "Growing Hope Against Hunger." Everybody's gathered for a food drive near Hooper's store when, Lily, a new Muppet developed specifically for the show, reveals to Elmo that "sometimes I go with my family to the food pantry." Elmo is clearly jolted by the news. "Elmo never even has to think about where his next meal is coming from," he says.

It's no surprise that Sesame Street is tackling a tough societal issue. The show's been doing it from the start, setting up in New York City and debuting in 1969 with a cast of multicultural characters as friends. It was a time when a lot of Americans thought of the city as crime-ridden and racially divided.

Just in the last couple of years, the Workshop has produced specials about parents losing a job and how children grieve after a parent dies.

In the new program, which airs October 9th on PBS, (check out the sneak preview video above) the Workshop goes after the very big problem of childhood hunger. The USDA says 16 million kids live in "food-insecure" households, meaning they have limited access to affordable and nutritious foods.

But plenty of Americans don't get it. "What's still missing is that we're not seeing the face of hunger up close," says Jeanette Betancourt, Sesame Street's Senior Vice President for Outreach and Educational Practices.

The show takes on hunger in its trademark way — with simple information about food drives, vegetable gardens and volunteering — fun dialogue and upbeat tunes, thanks to country singer Brad Paisley. And Sesame Street staffers make it happen with their usual childlike energy — so apparent on the set when the special was taped in July.

The puppeteers sat on rollies — cushions on wheels — holding their Muppets high above their heads as they scooted around. There was plenty of joking around. When Lily tripped over a few words, Elmo, completely in character, said "You only had one line!" and bopped her on the head.

But they were serious about getting it right, too. Kevin Clash, who has played Elmo since 1984 and directed the special, stopped repeatedly to perfect the scenes. "One more time," he said. "Alright, we got it. Good."

The show doesn't rely on the Muppets alone. Four documentary vignettes comprise a good chunk of the special and feature kids who've experienced hunger directly. In one of them, Josie, 7, says that when her father wasn't working, there was no money for snacks at school.

"So what I would do is just drink some water from the fountain," she says, "until my stomach's full of water," she says.

The stories are moving examples of what it's like to experience hunger, but they all have relatively upbeat endings, which doesn't always happen in real life. Josie's father gets a job and she helps deliver food to other people who need it.

The workshop's intent was to show a positive message, so it doesn't touch many of the really depressing aspects of childhood hunger — the fatigue, the headaches, the malnutrition, the inability to focus in school.

No TV special can substitute for actually being there. And let's face it, kids are watching too much TV already, and it's hard to break through the noise. Anybody's who's serious about teaching their children about hunger should pack up some groceries and take them to a food drive or a soup kitchen.

Still, "Growing Hope Against Hunger" is a preschool primer about a reality many parents don't know how to talk about. Plenty of them will be grateful that Sesame Street is educating (and, yes, entertaining) their children.

Will it have an impact? One four-year-old we know was captivated.

During a preview of the show, he asked two questions: "Is junk food not good for you?" and "Can we plant a garden today?" When it was over, he stood up on a dining room chair and announced that he was ready to take "questions about food drives!"

We think the message got across.

Claudia Kalb is a freelance writer, specializing in science and medicine. She was formerly a senior writer at Newsweek.

(Editor's Note: If we'd known NPR was stealing Sesame Workshop's President and CEO Gary Knell when we commissioned this story, we would have demanded an early release of the video! Seriously, the piece was in the works long before the CEO announcement.)