Accessibility links
East Coast Pumpkin Shortage Won't Dent The Canned Kind : The Salt Canned pumpkin is not just for pies anymore. Pet owners feed it to pudgy doggies to help them lose weight without feeling deprived. A similar principal of bulking up on healthy stuff applies to people diets, too. 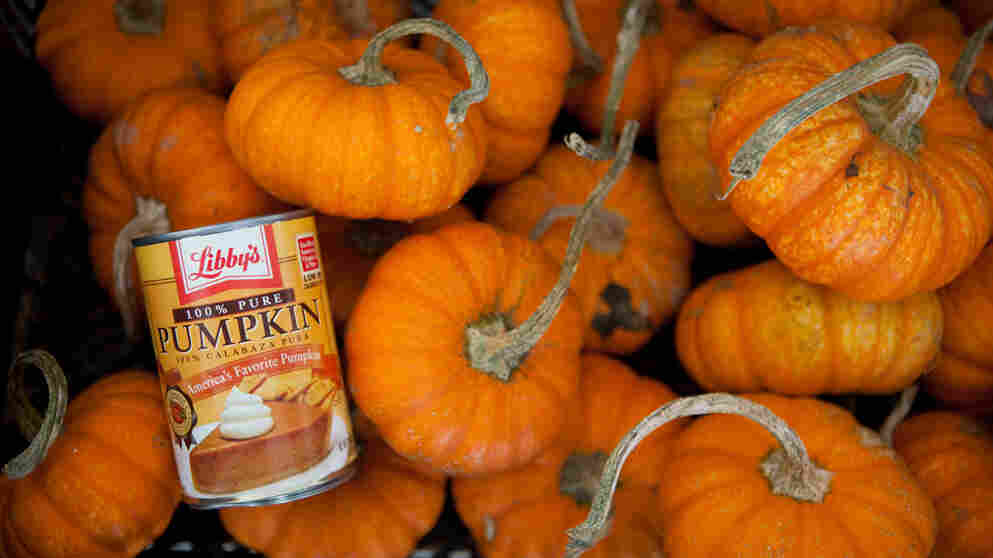 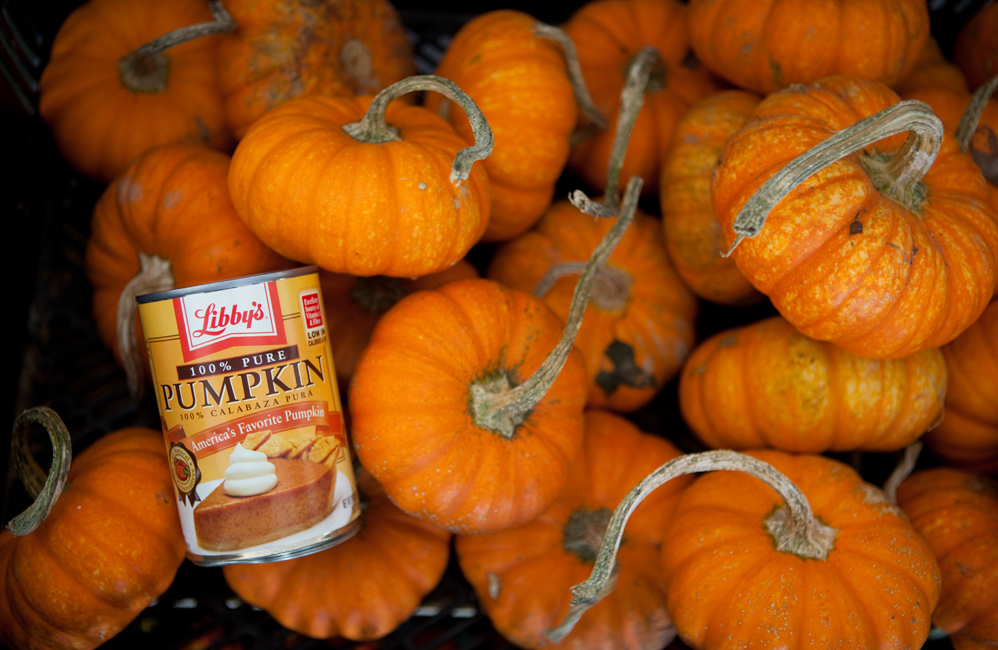 With Halloween rapidly approaching, you've probably heard about the shortage of pumpkins along the East Coast caused by the flooding rains of Hurricane Irene.

But while you may have troubling finding just the right shape or the right price for your jack o'lantern this year, there's good news for those looking ahead to the pies and cakes of Thanksgiving and Christmas.

Unlike in recent years, the shortage shouldn't extend to the canned pumpkin most often used for pumpkin pie.

"Everything looks good so far," says Roz O'Hearn, spokeswoman for Libby's. Libby's pretty much has the market cornered on the canned stuff.

The trick is, Libby's grows one kind of pumpkin — the Dickenson — on one big plot of land — 6,000 acres in Morton, IL. And so far, no natural disasters have threatened this year's crop. Harvesting began in August, and will continue through November.

But back in 2009, flooding rains across the Midwest made harvesting Libby's pumpkins virtually impossible. As a result, says O'Hearn, "you had acres and acres of pumpkins that couldn't be picked." And what followed was a major shortage.

Last year's harvest was "acceptable," she says, but buyers who were spooked by the year before quickly scooped up all the product as it appeared on store shelves. As a result, while there was enough for the 2010 holiday bakers, there was none leading up to this year's harvest.

Why does it matter? It turns out that pumpkin isn't just a holiday food anymore. More and more consumers are using the canned stuff year round, including an apparently growing number of pet owners (including me) who feed canned pumpkin to their pets. There's even specialty companies that now market canned pumpkin just for pets.

There's dozens of websites recommending the pumpkin-for-pets practice, to treat everything from constipation to diarrhea to weight loss. But is it really a good idea?

"It's certainly not uncommon," says Andrea Fascetti, a veterinarian and professor of nutrition at the University of California-Davis School of Veterinary Medicine. "Some of it is vet-prescribed, some is owner-prescribed."

Fascetti says the primary benefit of pumpkin is that it's high in fiber, which is why it can aid in, ahem, "fecal issues."

In other cases (like mine) owners replace a portion of their pet's regular food with lower-calorie pumpkin to help our pudgy doggies lose weight without letting them feel like they're starving. A similar principal of bulking up on healthy stuff applies to people diets, too, by the way.

Fascetti says that's often a helpful strategy for owners with overweight animals. "People don't like to feel they're depriving their pets."

But she does offer some recommendations and warnings:

-- Always talk with your vet first before changing your pet's diet. Many dogs or cats may have food sensitivities that can make some human foods problematic. For example, pets with kidney problems need a diet low in phosphorous.

-- Don't substitute more than 10 percent of your pet's food with a human supplement. That could deprive them of the full array of vitamins and minerals provided in commercial pet foods.

--If you're going to use canned pumpkin, make sure it's the 100 percent pure pumpkin, not the pumpkin pie filling. Pie filling includes added sugar and spices that can make pets sick, so check the label carefully.

-- If you plan to puree your own fresh pumpkin, be aware that not all gourds are alike. A recent post on the site Pet Poison Helpline included a report of potential dog poisoning from a Kabocha squash.