Accessibility links
How Long Does A Pumpkin Last? : The Salt The answer can depend on the weather, but it's probably longer than you think. It helps to know how to choose a pumpkin that will withstand the test of time.

How Long Does A Pumpkin Last?

How Long Does A Pumpkin Last? 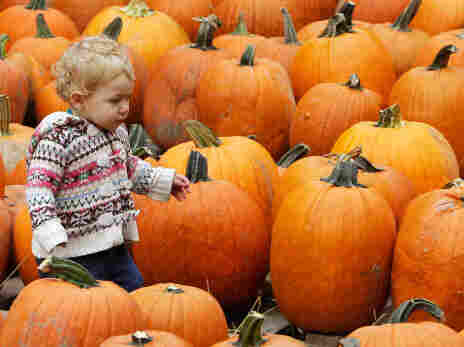 Pumpkin shoppers should be on the look out for a pumpkin with a firm stem, or handle, still attached. Fifteen-month-old Lucy Myers searches for a pumpkin at Patterson Fruit Farm Oct. 18, in Chesterland, Ohio. 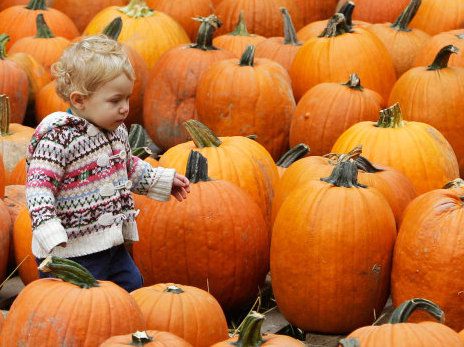 Pumpkin shoppers should be on the look out for a pumpkin with a firm stem, or handle, still attached. Fifteen-month-old Lucy Myers searches for a pumpkin at Patterson Fruit Farm Oct. 18, in Chesterland, Ohio.

It's pumpkins' moment in the limelight. They're all over the place, breaking records, getting makeovers by master carvers, moonlighting as cameras, and even ending up in the bowls of lucky dogs.

That's all fine and good, but some of us could use some pumpkin basics. For example, we were curious just how long a pumpkin can last, carved or uncarved?

Steve Reiners, a horticulturist at Cornell University, says it depends on the state of the pumpkin and the weather.

"If the pumpkin was healthy when picked and diseases were controlled in the field, the pumpkin can last 8 to 12 weeks," he says via email. He adds jack-o-lanterns don't fare as well: They last five to 10 days.

The best storage temperature for pumpkins ranges between 50 to 55 degrees Fahrenheit, he says. But cold weather can cut into a pumpkin's lifespan. A little light frost might cause a little discoloration; but the pumpkin won't fare well if temperature drop below freezing.

"Freezing temperatures damage the plant cells just like they would with any living organism," he says. "If the pumpkin actually freezes, once it warms up, the skin can soften, which may open it up to ... rot."

But where freezing can come handy is preserving the pumpkin pulp. The University of Nebraska has a number of good tips on how get the nutritious meat out and what to do with it.

When searching for a pumpkin, Reiners says it's important to find one with a firm stem, or handle, still attached. "That's a great indicator of how healthy it is," he says. When the stem is rubbery and weak, "chances are rot organisms will start to soften the pumpkin quickly." But once you find a firm stem, be gentle — it's better to carry to pumpkin around the fruit.

Once the carving begins, leave the stem on, experts say. It's still providing the pumpkin with some nutrients that will keep it pretty and orange for several more days.

Reiners says there are more than 200 varieties of Halloween-type pumpkins — which can range from one pound to 150 pounds — in the species Cucurbita pepo. And some squash in the related species, Cucurbita maxima, may be considered pumpkins, too. (Read more on cooking with newer kind of squash in Bonny Wolf's piece for Kitchen Window last year.)

But Reiners says he won't be buying any pumpkins, large or small, this year. One perk of knowing so much about pumpkins is that you usually find a way to get them for free.