Accessibility links
In Peru, A Hunt For Chocolate Like You've Never Tasted It : The Salt Some 500 years after Columbus first encountered cocoa beans, scientists are discovering new, wild cacao flavors in the Amazon rainforest. Turns out, we've barely begun to sample the many flavors nature has to offer. 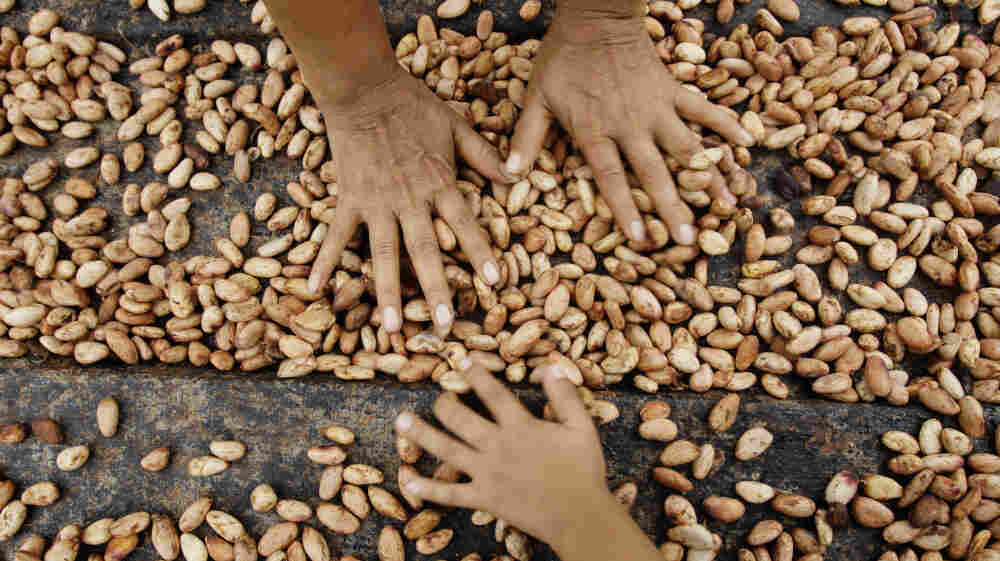 Farmers dry cacao beans in Uchiza, Peru, a file photo from 2008. Researchers are exploring the wild cacao bounty of Peru's Amazon Basin, part of an effort to jump-start the country's premium cacao industry.

Christopher Columbus first encountered the cacao bean on his final voyage to the New World some 500 years ago. It took a while for Europeans to embrace the taste — one 16th-century Spanish missionary called the chocolate that indigenous people drank "loathsome."

But by the 17th century, chocolate met sugar, and it became a hit the world over — it's now a $93 billion a year global industry, according to market research firm Mintel.

Centuries and countless foil-wrapped bars later, it turns out we've barely begun to sample the many flavors that nature has to offer to satisfy our chocolate cravings. Scientists from the USDA's Agricultural Research Service recently reported discovering three previously unknown varieties of wild cacao in the Amazon rainforest of Peru.

"It's pretty amazing that this crop that we've been growing [for hundreds of years] — we still know so little about it," Lyndel Meinhardt, who led the ARS research team, tells The Salt.

Cacao trees originated in the Amazon. Mesoamericans cultivated cacao for thousands of years, and chocolate was important to both Mayan and Aztec culture. The Spanish introduced the treat from the Americas to the Old World — and added the sugar. Eventually, other European powers wanted in on the action, so they exported cacao trees to their colonies — which is how Africa ended up providing much of the cacao we eat in chocolate today.

But apparently, "some of the fine flavor material wasn't moved in the beginning," says Meinhardt. So the bulk beans grown in Africa represent just a small sampling of the many flavors of cacao. Or as connoisseurs might argue, it's not the really good stuff.

The world's germplasm banks — collections of genetic material that the chocolate industry relies on to preserve cultivars — aren't much help, either. Meinhardt says, "There's not a lot of diversity in the collections."

Meinhardt and his colleagues from ARS aim to change that. So they teamed up with Peru's Instituto de Cultivos Tropicales to document the genetic bounty of wild cacao in the country's Amazon Basin. The haul from expeditions in 2008 and 2009 included 342 wild cacao specimens from 12 watersheds.

Like wine, cacao flavor is influenced by the region where it's grown. The researchers want to catalog Peru's "cacao varietals," analyze their DNA and identify the so-called flavor beans that premium chocolate makers covet. It's all part of an effort to help jump-start Peru's premium chocolate industry (and lure former coca farmers to cacao.)

The big question, of course, is what these chocolate discoveries taste like. Sadly for chocoholics, it will be several years before we get to find out. Cacao is a slow-growing tree; it takes at least five years for a tree to bear pods. So it will be a long while yet before the saplings now growing at a central collection spot in Tarapoto, Peru, yield enough beans to turn into chocolate.

It's possible the taste won't amount to more than a hill of cocoa beans. Then again, several years ago, the Amazon yielded up a wild cacao strain in Bolivia that Swiss chocolate maker Felchlin released in a limited edition bar called Cru Sauvage — or Wild Vintage — for about $60 a pound. Its flavor was apparently so arresting, it inspired one writer to journey into the heart of the Amazon in search of the man who helped bring it to market.