Accessibility links
'Pet Food': Legal Loophole For Raw Milk Lovers : The Salt In a handful of states that ban raw dairy sales for human consumption, it seems some aficionados are taking advantage of a legal loophole: They're buying it as food for Fido. 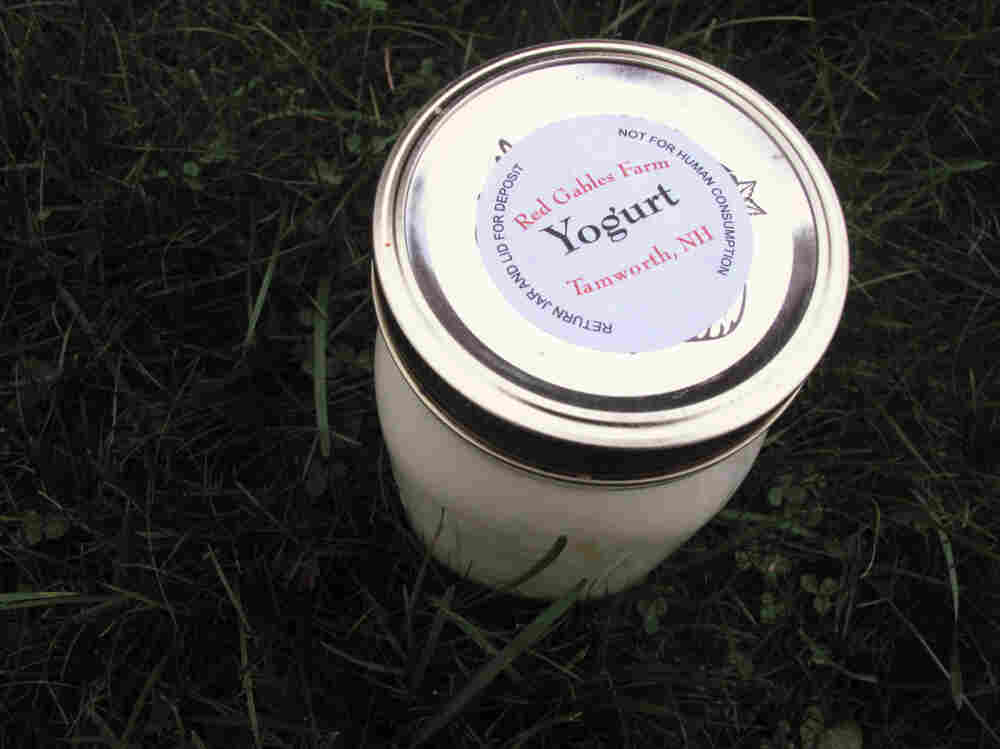 "Not for human consumption?" Sources tell us this raw milk yogurt was delicious.

Food fresh from the farm is undeniably appealing. Raw milk enthusiasts take it one step further: They like their milk fresh from the cow — skipping pasteurization.

But it's illegal to sell raw milk in stores in most U.S. states, and fans have been known to go to great lengths to buy dairy in its purest form. Last year, we told you about one Maryland mom who regularly drives almost two hours to a farm in Pennsylvania to buy unpasteurized milk for her family — paying $5 to $7 per gallon.

In a handful of states that ban raw dairy sales for human consumption, however, it seems some aficionados are taking advantage of a legal loophole: It's perfectly legit to buy it as pet food.

That appears to be the case in Florida, where about a dozen new farms signed up to sell raw milk as "commercial feed" in the past year, bringing the total number of registered farms to 46, according to the Sun Sentinel. Of course, it's impossible to know how much of this "pet milk" is getting slurped up by Fido or by his masters. But "state officials acknowledge that there's an underground supply chain" for human consumption, the paper reports.

In fact, labeling raw milk as pet food is one of several known "moo-nshine" strategies employed by farmers looking to circumvent state and federal legal bans. "FDA is aware of reports like those in the Florida Sun Sentinel," FDA spokesperson Stephanie Yao tells The Salt.

Such subterfuge is necessary in a "dysfunctional" legal landscape, argues Pete Kennedy, the president of the Farm-to-Consumer Legal Defense Fund, which represents some 2,000 individual farmers across the U.S. who sell raw milk, and some 3,000 members of raw milk-buying clubs.

"The consumption of raw milk is legal in every state in the country," Kennedy says. "But you have 20 states where the sale is illegal. So you have this right with some people unable to exercise it."

Laws against raw milk sales stem from health concerns. The FDA says pasteurization is necessary to kill harmful bacteria like E. coli, Salmonella and listeria that might linger in raw milk. Between 1998 an 2008, drinking raw milk was linked to two deaths and more than 1,600 reports of illness, according to the FDA.

But advocates for raw milk say it's worth the risk. It has a creamier, more complex flavor than the pasteurized variety. They say pasteurization — in which milk is heated to 161 degrees Fahrenheit to kill microbes — also kills vital nutrients, a claim the FDA dismisses.

It's up to individual states to decide how raw milk is sold within their boundaries, and 30 of them allow it in some form, according to a recent survey by the National Association of State Departments of Agriculture.

But federal law prohibits the interstate sale of raw milk for human consumption. And in recent years, the feds have cracked down on at least one California dairy farmer, Mark McAfee, who tried to skirt the ban by selling the raw stuff to out-of-state customers as "pet food." It probably didn't help McAfee's case that he bragged about his legal loophole to a Portland newspaper.