Accessibility links
Politics Heating Up Over Labeling Genetically Modified Foods : The Salt Scientists and regulators have concluded time and time again that labeling genetically modified foods is unnecessary because they are no different than other foods. But food policy experts say just label them, already, so people can make their own choices. 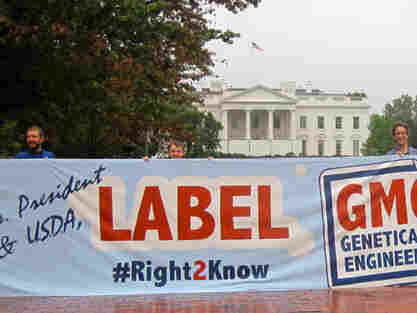 Do you really know much about the corn in your cornflakes?

Probably not. But a few hundred protesters who descended on the White House yesterday want President Obama to honor a campaign pledge to label foods that have been genetically-modified — like the corn in most of those cornflakes that have been in your bowl for years.

However, politicians who govern the country often find themselves at odds with the candidates they once were. And the GM issue has become a full-blown political one that's not likely to go away anytime soon.

Back in 2007, presidential candidate Obama said he would "let folks know when their food is genetically modified, because Americans have a right to know what they're buying." (Roll the videotape.)

But as president, Obama has actually cleared the way for more GM products. He has allowed alfalfa, which feeds our cattle, and sugar beets, which fuel our coffee and sweets, with modified genes on the market. That's much to the consternation of organic farmers who fear cross-pollination of their crops with the modified crops and activists who fear potential future health consequences.

The FDA is currently considering a genetically-engineered salmon that carries the genes of another fish to help it grow faster. However, the U.S. House of Representatives passed a provision this summer that would block the agency from spending money to approve the salmon. And the Senate is likely to debate the same issue this week as part of the agriculture spending bill.

The Daily Beast has a pretty good round up here of the political battle over GMO labeling so far.

Foods that have been genetically modified — that is, foods that have new genes inserted into their DNA to give them desirable traits like pest or drought resistance or greater nutrition — have been controversial for years. And that's in part because they are currently not required to be labeled in the U.S., although the vast majority of people polled say they should be.

Scientists and regulators have concluded time and time again that labeling is unnecessary. "FDA has no basis for concluding that bioengineered foods differ from other foods in any meaningful or uniform way, or that, as a class, foods developed by the new techniques present any different or greater safety concern than foods developed by traditional plant breeding," the agency says in a guidance document.

Some say labeling would indicate that there is something wrong with the food. By the way, some 70 to 90 percent of processed food is genetically modified, and has been that way for years.

The battle has moved well beyond the realm of science, and its political impact on the health and food-conscious Obamas has yet to be measured. Some protesters have vowed not to support the president's reelection over the issue.