Accessibility links
To Save Soggy Grapes, Winemaker Looks To Helicopter : The Salt Winemakers, like farmers across the country, have faced bouts of extreme weather recently. One grape grower tried an inventive method this month to save his prized Cabernet Sauvignon.

To Save Soggy Grapes, Winemaker Looks To Helicopter

To Save Soggy Grapes, Winemaker Looks To Helicopter 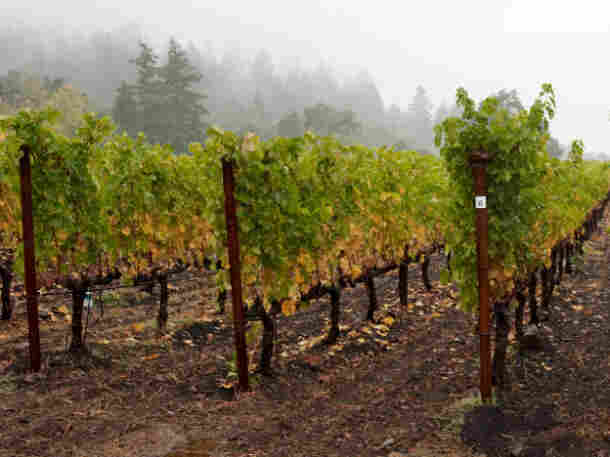 Damp weather in wine country can make for moldy grapes that can't be harvested. 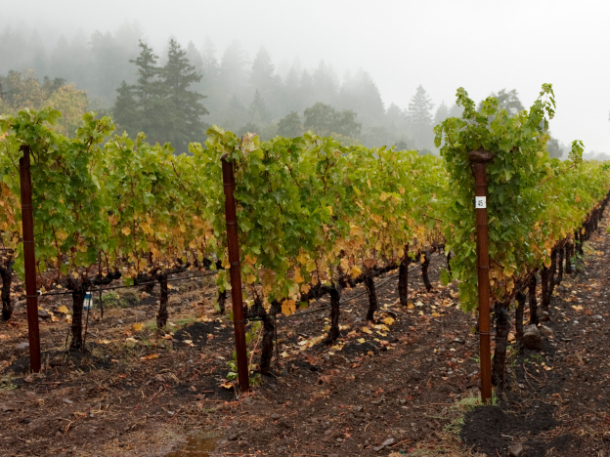 Damp weather in wine country can make for moldy grapes that can't be harvested.

It's been raining for days and the crop you're a week away from harvesting is about to mold. If you don't dry it quickly, you will lose the crop. What do you do?

If you're Bruce Cakebread, you call in a helicopter to be a giant grape dryer.

When rain soaked Napa Valley two weeks ago, Cakebread — the president of Cakebread Cellars in Rutherford, Calif. — used a technique occasionally employed by orange and cherry farmers. It's just the latest example of farmers forced to take drastic measures to salvage crops in the face of extreme weather.

If mold forms on grape clusters, they can't be picked for harvest. Fortunately for the valley's winemakers who got drenched this month, most of the white and red varietals had already been picked, Cakebread tells The Salt. But the Cabernet Sauvignon — a tougher, more resilient varietal — still hung on the vines during the wet weather.

Cakebread's hired helicopter snaked up and down 100 acres of vineyard about 20 feet above the valley floor, using the wind from the chopper's blades to push water off the plants. (You can watch the video here.)

So did the helicopter technique work?

It's too soon to tell, Cakebread says. Shortly after the chopper left, fog rolled into the valley from the sea and may have counteracted some of the helicopter's work. He says he won't know the extent of the crop damage until the harvest finishes later this week. For now, workers are busy picking the healthy grapes for crushing. In the end, there just may not be as many bottles as in years past to sell.

"We've been through short crops before," he says. "Every year Mother Nature gives us a bigger crop in one variety and less in another."

It's a pricey endeavor to hire a helicopter — he says it's about $400 per hour — but it far outweighs the cost of losing a big chunk of his Cabernet Sauvignon. Cakebread, who tried the same technique in 2002, says he just couldn't sit around and do nothing.

"It's not an absolute method that works, but it makes you feel better," says Cakebread.

Farmers from Arkansas to Louisiana who have been pummeled by floods, tornadoes and droughts this year can probably relate. Thousands of acres of soybean, rice, corn and other crops have been destroyed despite farmers' best efforts to protect them, amounting to as much as $1 billion in losses.

Farmers expect some degree of extreme weather, but the string of devastating events in recent years means farming is becoming more risky. "We've seen this weather back in '79 and '89," Cakebread says. "You see this come through once every 10 years, but with all the recent weather changes, you never know."