Accessibility links
Insect Cuisine Is All The Buzz : The Salt San Francisco has a burgeoning entomophagy (bug eating) movement, and its proponents say bugs have a lot of advantages over meat. They're tasty, not that different from shellfish, and better for the environment. 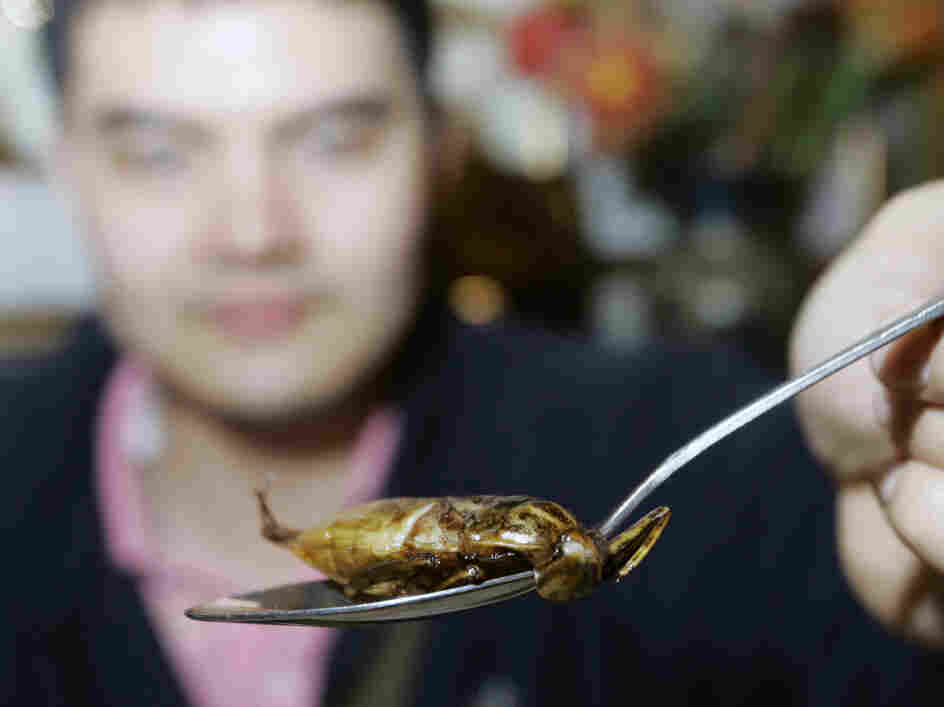 A customer holds up a spoon of deep-fried water bug in a restaurant in Thailand. Insects are a popular food in Thailand and many other countries around the world. 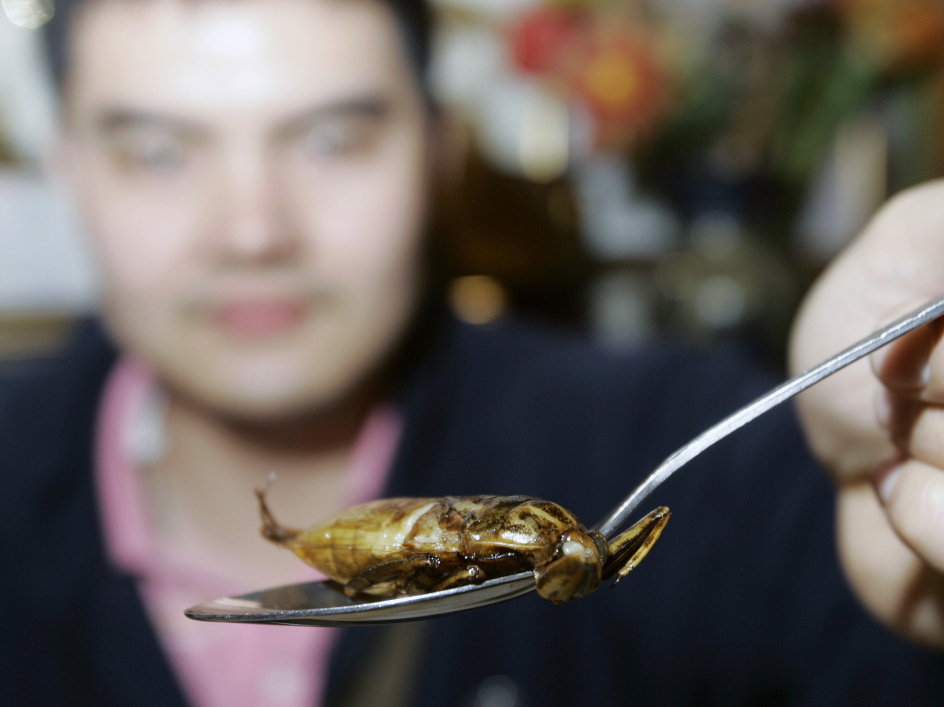 A customer holds up a spoon of deep-fried water bug in a restaurant in Thailand. Insects are a popular food in Thailand and many other countries around the world.

Kudos to the SF Weekly for their fascinating in-depth cover story last week on bug eating. The City by the Bay has become a "hotbed of insect cuisine," David Gordon, an entomophagist (bug eater) and author of The Eat-A-Bug Cookbook, tells the alternative weekly.

But could it be that daring Bay Area foodies have run out of provocative ingredients for their elaborate meals? Or is this a legit movement with six legs? Reporter Peter Jamieson makes a fairly compelling case for the latter, interviewing many of the key players in the bug eating world, including the owner of a bug-focused food truck called Don Bugito, bug bloggers, bug cookbook authors and others.

Their arguments for why you should eat bugs consist of the following:

Besides the general cultural taboo against bugs, much less eating them, there are a few other obstacles for the entomophagists. Ready-made bugs for eating are actually pretty expensive, compared with meat. And there aren't a lot of people raising or distributing them, either.

Still, the advocates make some interesting points. "I like to point out that lobsters and crabs eat trash and feces and dead animals, and grasshoppers eat salad," David Gracer, a naturalist and entomophagist, tells the SF Weekly.

And cutting-edge San Francisco culinarians aren't the only ones pushing bugs for dinner.

Last year the United Nations Food and Agriculture Organization said it may promote insect consumption over meat consumption as a way to improve nutrition and limit global warming. It helps that people around the world are already chomping on a lot of arthropods: 527 different insects are eaten across 36 countries in Africa, 29 countries in Asia and 23 countries in the Americas, says the FAO. Crickets, or chapulines, are a tasty snack in Mexico, for example, while locusts are caught and eaten in African countries like Sudan.

The U.N.'s interest in insect consumption as a way to tackle greenhouse gas emissions from agriculture was inspired by the work of Arnold van Huis, a tropical entomologist at Wageningen University in Belgium. He wrote in a paper published last year in the journal PLoS One that locusts, crickets and meal worms — all edible and nutritious — emit 10 times less methane and 300 times less nitrous oxide than livestock.

Still, it's hard to imagine that if given the choice, most Africans or Latin Americans would willingly choose bee larvae over bacon. That is, unless they're offered a bacon-flavored beetle.