Accessibility links
Snuffing Out Snakehead By Putting It On The Plate : The Salt The snakehead fish is invasive, destructive, and, some say, delicious. Maryland chefs, fishermen, and conservationists hope that by putting it on menus, they can eliminate it from regional waterways. 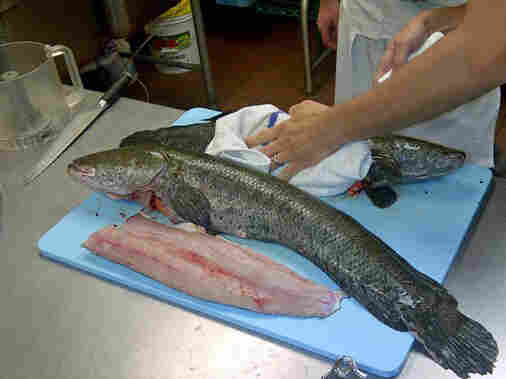 A snakehead is filleted for a dinner this week hosted by the Oyster Recovery Partnership. 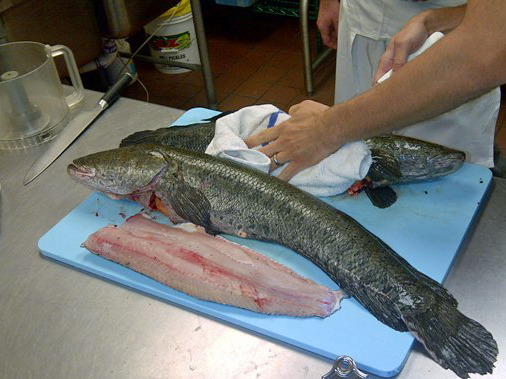 A snakehead is filleted for a dinner this week hosted by the Oyster Recovery Partnership.

That's the rallying cry for conservationists who are recruiting cooks — and their filet knives and frying pans — to the fight against invasive fish species.

The latest target is the snakehead fish, an aggressive animal native to Asia and Africa that has been populating the waterways of Maryland and Florida with frightening speed over the past decade. A predator capable of eating fish as large as perch and bass, the snakehead dominates rivers and lakes once it enters them.

But this week, the snakehead went from aquatic pest to delicacy at a fundraiser for an Annapolis-based environmental organization, the Oyster Recovery Partnership. Nine prominent chefs — including National Geographic Fellow Barton Seaver — grilled, seared, and broiled the pale filets, and then served them to a curious audience.

The dressed-up dinner plate strategy has been tried before to eradicate invasive species, or at least contain them. And it's had varying degrees of success.

With some problematic fish, like the Asian carp that has taken over the Mississippi River, it's been difficult to get people to adjust their palates for the environment's sake. And coral reef defenders are still hoping an appetite for lionfish will take hold.

But that may not be a problem with the snakehead. Snakehead is a traditional food in Vietnam and Thailand, among other places. And John Rorapaugh, the vice president for sustainable initiatives at ProFish, a seafood supplier based in Washington, D.C., describes the fish as "very clean tasting, mild, and just a great, great delicacy."

In the past, Maryland's Department of Natural Resources, or MDNR, has tried to drain and poison ponds to stop the snakehead from spreading.

But Rorapaugh hopes that convincing commercial fishermen to pursue and market the fish at fish markets will be more effective. The biggest challenge is catching it since it typically doesn't congregate in large schools.

Promoting this particular fish as a food source is an ironic choice of eradication strategies because, "unfortunately, that's probably how they got here to begin with," Donald Cosden of MDNR tells The Salt. The U.S. Fish and Wildlife Service concurs, listing the probable cause of the snakehead's establishment in the U.S. as "individuals releasing these fish to establish a local food source."

While Rorapaugh hopes to see snakehead filets for sale in local grocery stores, he says there are no plans to set up a real fishery. "I would be very happy to sell, sell, sell, sell, and then have no more to sell," he says. In the meantime, he says, recreational anglers can help out by seeking out the fish in rivers like the Potomac, where the snakehead has set up shop.