Accessibility links
Crop Insurance: A Pricey 'Safety Net' For Farmers : The Salt Crop insurance has become a critical safety net for farmers subject to fickle weather that can ruin crops. And though politicians are looking to make some big cuts to farm programs in the upcoming 2012 farm bill, farmers are clinging fiercely to crop insurance. 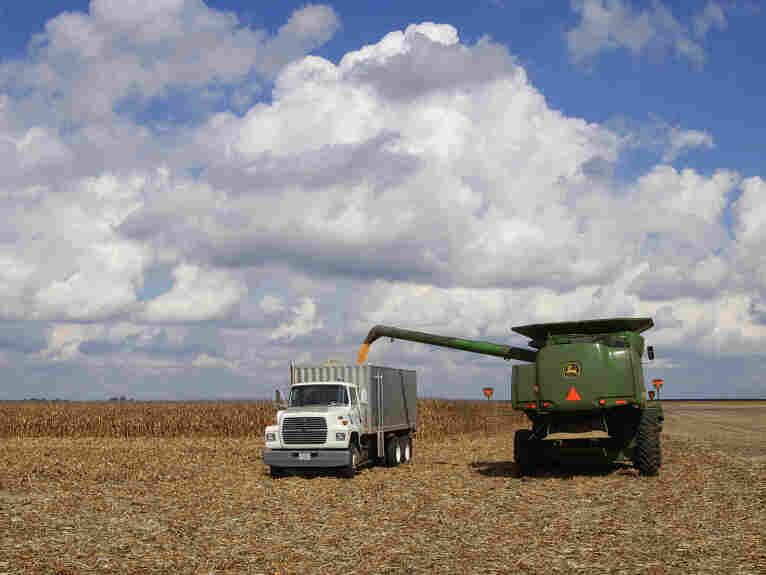 Illinois farmers harvest corn crops near Monticello, Ill. An unseasonably hot summer likely damaged much of this year's corn crop, which means farmers may seek support through their crop insurance. 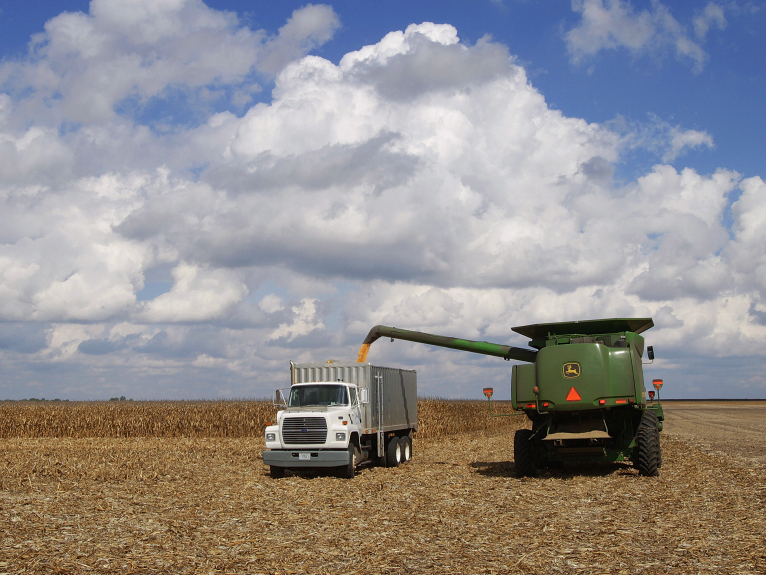 Illinois farmers harvest corn crops near Monticello, Ill. An unseasonably hot summer likely damaged much of this year's corn crop, which means farmers may seek support through their crop insurance.

Farming nowadays is risky business — it's not uncommon for a farmer to invest $500,000 in 1,000 acres of corn or soybeans, and run the risk of losing a chunk of their income to pests or fickle weather events like droughts and floods.

That's why farmers say crop insurance is "the most important safety net program" for them, says Joe Glauber, chief economist of the U.S. Department of Agriculture.

And though politicians are looking to make some big cuts to farm programs in the upcoming 2012 farm bill, farmers are clinging fiercely to crop insurance.

The program has ballooned in recent years; ten-year projections show the government paying $8 billion a year to both producers and crop insurance companies, making it the biggest farm program expenditure. So now some economists are asking if we're subsidizing it too much. In a recent paper, Vincent Smith of the American Enterprise Institute, wrote: "the U.S. federal crop insurance program has become one of the most expensive ways of transferring income to farmers while, at the same time, supplying products that most farmers would never buy absent subsidies."

Here's a big part of why it's gotten so expensive in recent years:

"So what a farmer's choice is: Should I buy full coverage and the taxpayer pay 60 percent of the cost?" says Iowa State University economist Bruce Babcock, who has written a policy brief on crop insurance. "Well of course I'm going to buy full coverage!"

"But then if you took subsidy away, would a farmer make the decisions to buy full coverage? Some would, some wouldn't, just like rest of us make decisions about our medical insurance, property insurance."

Here's the thing: Unlike yield insurance, which protects a farmer in the case of hail or pest damage to his crop, revenue insurance actually guarantees the farmer a certain income. The amount of dollars guaranteed is based on market prices for grain (averages of the Chicago Board of Trade ) and the farmer's average yields in the past.

Take Frank Seidel who farms in western Iowa, for example. He's insured his corn and soybean crops at 80 percent, both yield and revenue insurance. A hailstorm hit one of his 70-acre fields and killed about 20 percent of his crop. The damage wasn't enough for him to get a yield insurance payment. BUT because soybean prices have come down some since last spring, Seidel will get a revenue insurance payment, which could be about $1,745 for that field.

"Basically what the revenue plan does, it lets the insured know he can plant this many acres and have so many dollars guaranteed so he can adjust his input costs to that figure," says Tom Borrall, Seidel's claims adjuster.

Now the insurance isn't cheap — Seidel's paying $18 an acre for soybeans and $30 an acre for corn for his 1,000+ acre farm. But the government is paying even more.

"Even going back to the early 90s, the liability average from 1991 to 1995 was somewhere around $14 billion," says Glauber of the USDA. "If you look at the last five years we've been more in the $70 billion to $80 billion range. Just dramatic growth."

And that has some worried. Kathy Ozer of the National Family Farm Coalition says putting more taxpayer dollars into crop insurance programs is basically sending it private insurance companies.

"The biggest concern around crop insurance is that it's in effect privatizing what should be, in our view, a role of government in helping to enable farmers to receive a fair price for what they produce," says Ozer.

Environmental groups are also concerned because enrollment in crop insurance programs doesn't require that farmers adhere to good conservation practices, as most other farm programs do.

Obama recently proposed a plan that would trim about $8.3 billion from the crop insurance program over 10 years. But what isn't clear yet is how much farmers are actually willing to let go.