Accessibility links
Chefs Say Variety Meats, Or Offal, Aren't Just For Halloween : The Salt Variety meats, or offal, were once common on American dinner tables before industrial-style livestock production made other cuts more affordable and available. But now some chefs say they are bringing them back because they're flavorful and more economical. 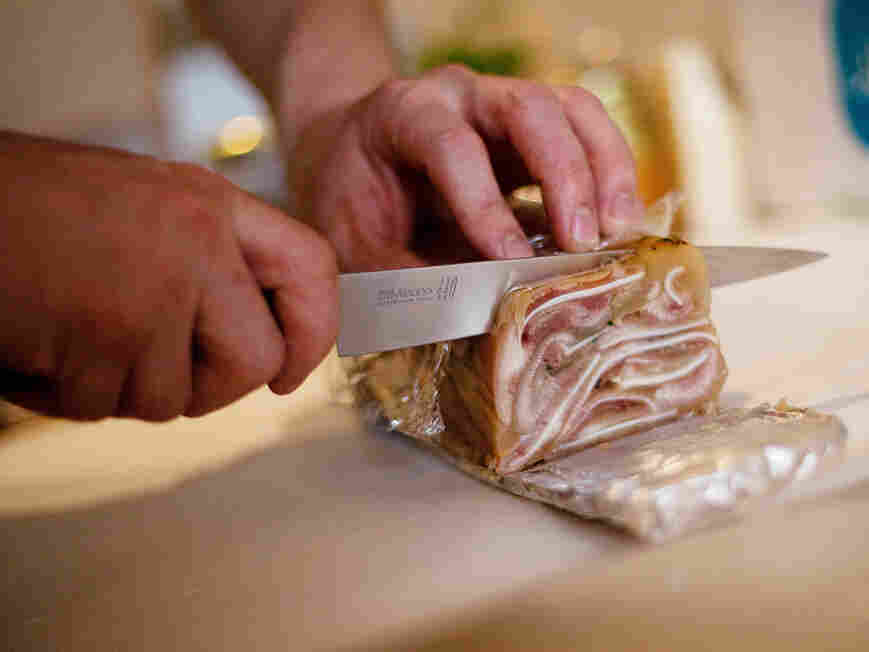 Chef Daniel O'Brien slices the pig ear terrine he made for the "Scary Bits" dinner at his Season Pantry supper club in Washington, D.C. 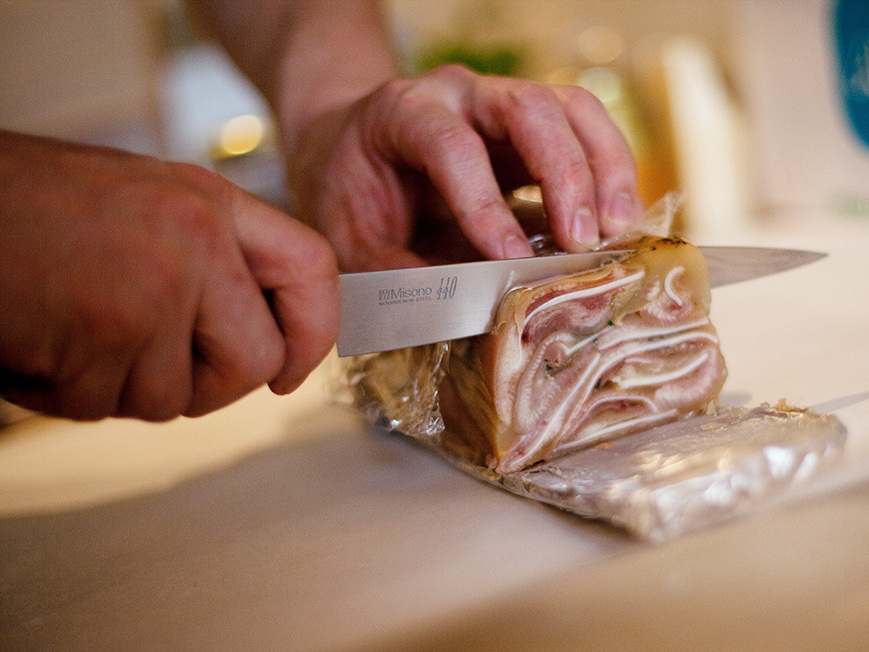 Chef Daniel O'Brien slices the pig ear terrine he made for the "Scary Bits" dinner at his Season Pantry supper club in Washington, D.C.

On the surface, it's easy to dismiss this menu as a mere Halloween stunt: duck hearts, cow tongues, lamb kidneys, pig ears and even testicles.

But chef Daniel O'Brien, who runs the Seasonal Pantry supper club in Washington, D.C., and hosted a "Scary Bits" dinner this weekend, is one of a growing number of innovative American chefs who are incorporating "variety meats," or offal, into everyday menus.

The term "offal" (which, unfortunately, sounds like "awful") comes from "off fall" — the parts that fell off the butcher's table, or an animal's organs, entrails and extremities. Advocates say it's flavorful and more economical than traditional meat cuts. It's also comparably nutritious: Some variety meats even have higher concentrations of vitamins and minerals like iron. And less wasted meat makes a single animal go further.

"If you're going to cook an animal," O'Brien tells The Salt, "you should make sure you utilize all the parts. It's your responsibility."

But first, O'Brien and other offal advocates will have to overcome Americans' squeamishness.

The U.S. ranks 135th worldwide in terms of per capita consumption of offal, according to the United Nations; what we do eat often comes in the form of hot dogs or sausages, where the meat is ground up and unrecognizable.

It wasn't always this way, says Jennifer McLagan, a former professional chef and author of Odd Bits, a new book about variety meats. A hundred years ago, she says, kidneys and other variety meats were a common sight on American dinner tables, as well as during the Great Depression, when meat was expensive and scarce.

Even today, some communities still savor offal: Chitlins, or pig guts, are a traditional dish in parts of the American South. Native American tribes have long eaten the organ meats of wild game. And immigrant communities in the U.S. cook up variety meats at home. But these are the exception. 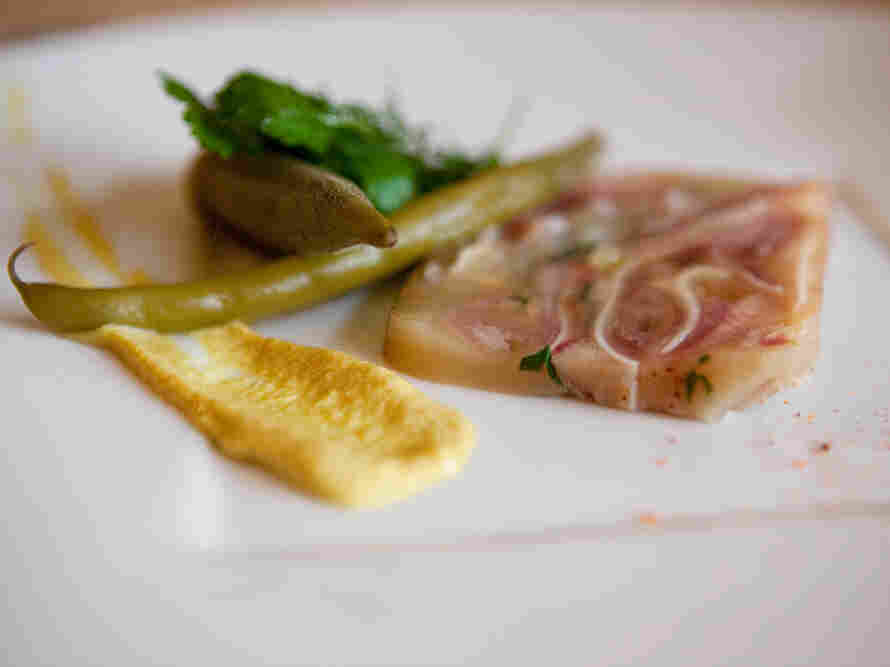 Advocates of offal say it's flavorful, nutritious and economical. 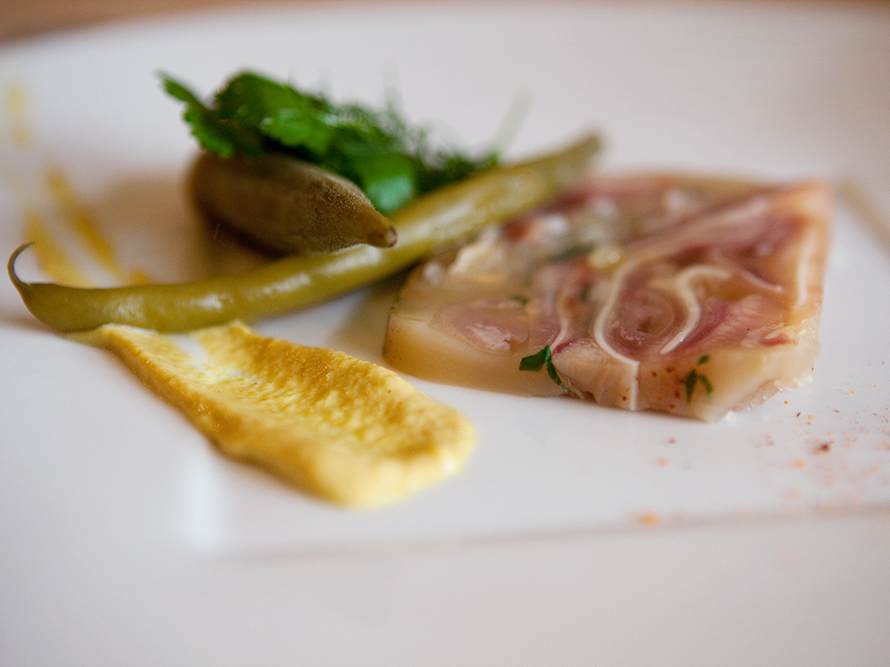 Advocates of offal say it's flavorful, nutritious and economical.

Many credit offal's resurgence in top restaurant kitchens to Fergus Henderson's Nose to Tail Eating, first published in 1999. Celebrity chef Anthony Bourdain has called Henderson "the most influential chef in the world" for helping to put ingredients that had grown irrelevant in much of the Western world back on the map.

O'Brien, for one, says he chose the "Scary Bits" dinner as an excuse to experiment with cuts he was introduced to by a fellow chef.

Amateur cooks are also learning to work with offal. On his website Nose to Tail at Home, Texas blogger Ryan Adams is chronicling his efforts to prepare every recipe in Henderson's book.

Adams says he's proof that it's possible — and worth the effort — to prepare tasty offal dishes at home.

"It takes time and technique to cook a pig's ear," he says. "I wanted to know how to make those undesirable parts tastier. And now I can explain why you'd want to eat duck hearts. They have a concentrated, distinct flavor [that's] more intense than breasts."

That's also what patrons of O'Brien's supper club said Thursday night when they bit into their duck hearts on toast.

"[The menu] is scary in concept but not in taste," said Alexandra Bookless, a diner.

O'Brien's presentation helped: He prepared the beef tongue like corned beef and served it with sauerkraut (a la Reuben sandwich). The duck testicle was rendered sausage-like in a cream sauce with pasta, and the marrow lived up to its mouth-smacking reputation, cooked into little balls resembling macaroni-and-cheese bites.

But it may take time for Americans to grow accustomed to the unusual texture of terrine — crunchy pig ear that came encased in a slimy gelatin. Only two of the seven diners present finished that course.