Accessibility links
How Fear Drove World Rice Markets Insane : The Salt No one can guarantee that the rice crisis of 2008 won't happen again. A lot of damage remains from the disaster that sent rice prices soaring even while there was plenty of rice. And there's still some of the fear that produced the crisis in the first place. 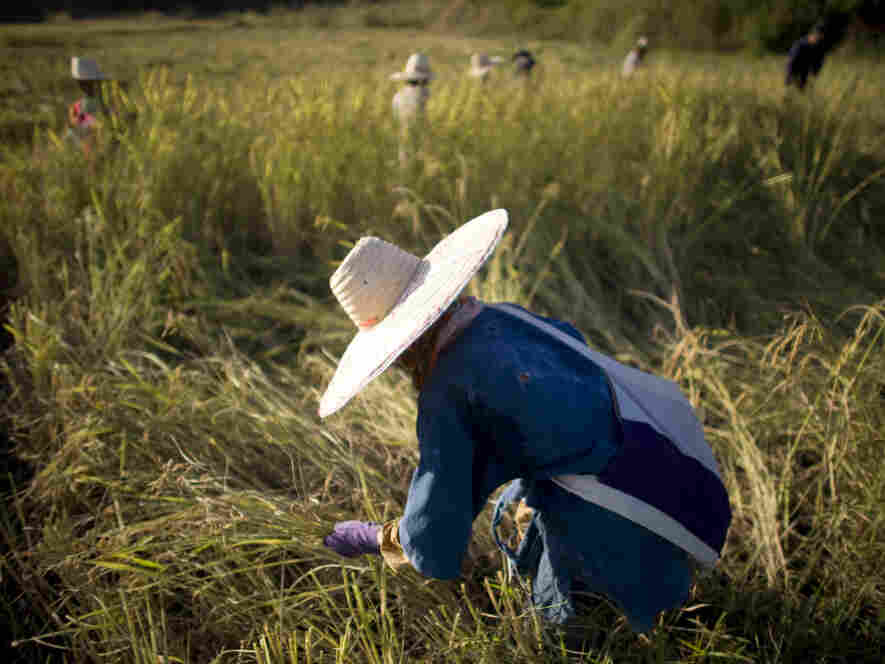 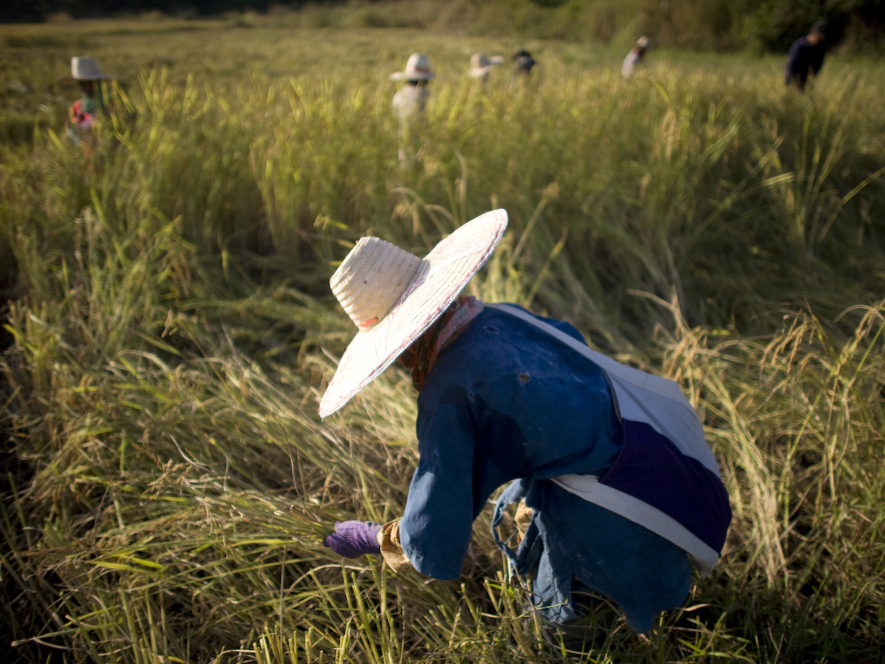 Rice farmers in Thailand, the world's leading rice exporter, harvest their crop in 2008. When the rice crisis hit, Thai government officials started talking about setting up a cartel of rice exporters, similar to OPEC.

Nothing is more basic and simple than food. Yet it comes to us courtesy of a long, complicated supply chain that spans the globe.

That chain delivers food cheaply — but it can break. Four years ago, it blew up in most spectacular fashion, affecting hundreds of millions of people who rely on rice for sustenance. That crash — the great rice crisis of 2008 — was a true disaster for some of the poorest people in Asia and West Africa.

And the most frightening thing about it is that no one can guarantee that it won't happen again — because the decisions that created it were all, somehow, perfectly reasonable.

This crisis started with a simple cost-saving decision in India.

The Indian government decided to buy more rice for its food distribution programs, instead of wheat. (Wheat was really expensive at the time.)

To make sure there was plenty of cheap rice on hand, Indian officials made it illegal for most Indian rice to leave the country. In October 2007, they blocked exports of all non-Basmati rice.

"This was the trigger, and we saw it the very next day," says Peter Timmer, an emeritus professor of economics at Harvard who is one of the world's leading experts on the rice trade.

Even though there was plenty of rice available around the world because farmers in many places were harvesting record crops, the Indian ban on exports meant that there was less for other countries to buy. Immediately, the price of rice on world markets started to increase.

Then came the next reaction. People started hoarding. Even Timmer went to Trader Joe's and picked up six boxes of rice. "I knew it was going to be really expensive in another couple of weeks," he says.

Governments, in their own way, did exactly the same thing. Early in 2008, Egypt, Pakistan and Vietnam all started limiting the amount of rice that they would export. Government officials in Thailand, the world's leading rice exporter, started talking about setting up a cartel of rice exporters, similar to OPEC.

That, in turn, put the squeeze on countries like the Philippines, which don't grow enough rice for their own consumption. They need to buy rice from abroad.

Panicked government officials in the Philippines went on TV to tell people to eat less rice. That, of course, convinced people to go out and buy even more. Prices surged again.

On top of incompetence came corruption. Government officials in the Philippines spent taxpayer money on a series of sweetheart deals with a state-run company in Vietnam called Vinafood. They bought huge quantities of rice at ever-higher prices. Timmer says they didn't mind paying high prices, because the higher the price, the bigger the kickbacks from their Vietnamese trading partner.

Those deals drove up the price by hundreds of dollars a ton. At this point, panic in the Philippines had spread to countries across Asia. "People panicked everywhere," says Timmer. "In Ho Chi Minh City, for heaven's sake, the center of the second-largest rice exporting surplus in the world, supermarkets and rice markets got cleaned out in two days."

In countries that relied on imported rice, from West Africa to the Philippines, people got squeezed hard. Ben Flores, a janitor in the Philippines, says he just had to eat less. "Before that, I used to eat rice every morning," he says. "I really lost weight because of that."

And remember: All of this was completely artificial. There still was plenty of rice in the world! Fear and self-interest was keeping it off the market.

Two Americans — the economist Peter Timmer and Tom Slayton, who follows rice markets for a living from his home in Alexandria, Va. — hatched a plot to pop the rice bubble.

"Tom called me up and said, 'Peter, there's a million and a half tons of high-quality rice sitting in Japan,' " recalls Timmer.

These stockpiles of rice exist because the World Trade Organization has forced Japan to import it from the U.S. But Japan doesn't want that rice, and most of it just sits in warehouses. Japan is not allowed to re-export it — unless the U.S. says it can.

Timmer and Slayton started a lobbying campaign, pushing a deal between the U.S. and Japan that would allow Japan to export that rice to the Philippines. In mid-May 2008, both sides agreed. And that announcement was enough; the price started to drop.

But a lot of damage remains, and so does some of the fear that produced the crisis in the first place. Neither ordinary consumers nor governments can be confident that the global food system won't go crazy again.