Accessibility links
Do Super-Sized Portions Boost Social Status? : The Salt People opt for bigger food portions when they're feeling powerless, according to new research. And when they're told that tiny portions are prestigious, they go small. That may be one reason why super-sized portions are so alluring, and why waistlines are bulging.

Do People Pick Super-Sized Portions To Boost Their Social Status?

Do People Pick Super-Sized Portions To Boost Their Social Status? 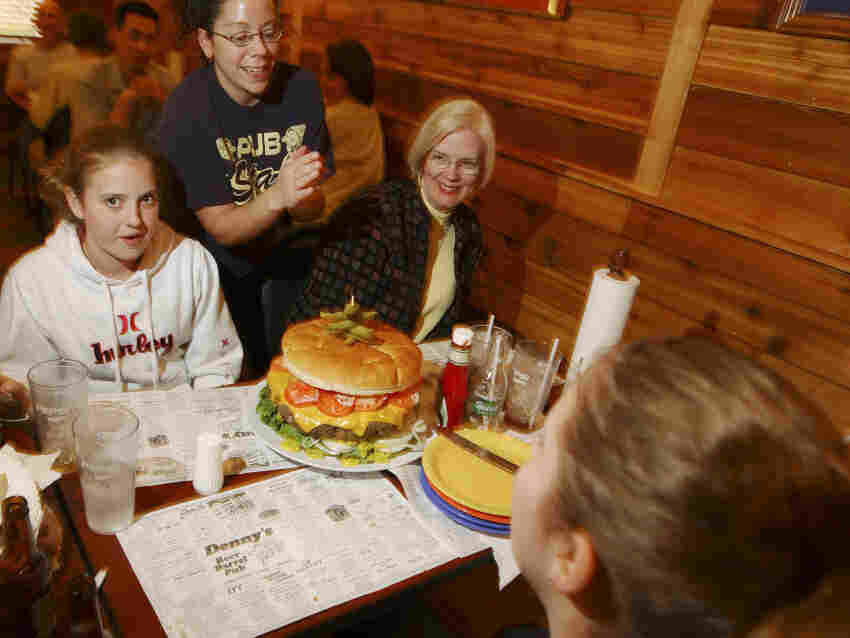 Denny's Beer Barrell in Clearfield, Penn. features a 15 pound burger for $39 that is free if the customer can finish it. Jeff Swensen/Getty Images hide caption 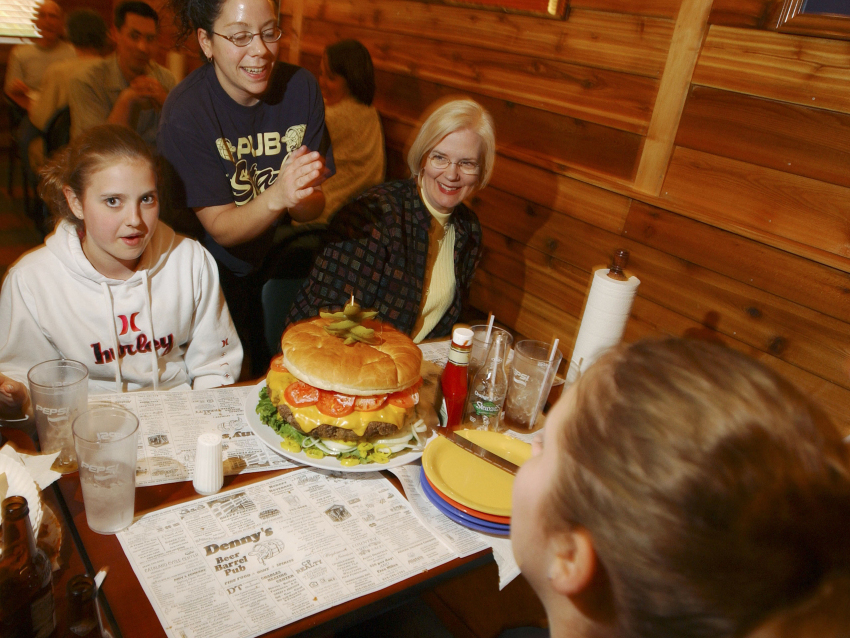 Denny's Beer Barrell in Clearfield, Penn. features a 15 pound burger for $39 that is free if the customer can finish it.

Choosing a Triple Whopper burger off the menu may say a lot more about feeling inadequate than it does about feeling hungry. In a new study, people chose jumbo portions of food and drink when they felt they lacked power and status.

If true, this data nugget could go a long way towards explaining why 32 percent of Americans are obese. Who doesn't have a day when they feel powerless and dissed? A Super Big Gulp or an extra-large pizza could seem like a quick, cheap fix.

The researchers cottoned on to the question when David DuBois, a graduate student at Northwestern's Kellogg School of Management, noticed that the smoothies at the student union were labeled small, medium and power. "Isn't that interesting?" says Derek Rucker, an associate professor of marketing at Northwestern who is a co-author on the study, which was published online in the Journal of Consumer Research. He and DuBois decided to figure out whether the size of food purchases signaled something about social status.

It turns out it does. The researchers asked people to judge a person's status, based on whether he or she picked the largest coffee, smoothie, or pizza offered. The people choosing the biggest portion were judged to have the highest status.

Another experiment asked subjects to remember a situation, with half being told to remember being in control and powerful, and half being powerless. They were then asked to pick a smoothie from three different sizes. The powerless students were more likely to choose the largest smoothie, while those with power control were more apt to pick the smallest size.

"It's not that we're inherently bound to bigger, but bigger and better seems to be a common way we perceive," Rucker tells The Salt.

Other research has found that people's food choices are often subconscious, even when information on portion size and calories is provided.

Food marketers seem to be making the most of that feeling, either accidentally or on purpose. Between 1977 and 1998 alone, portion sizes increased by 52 percent for soft drinks, 27 percent for Mexican food, and 23 percent for hamburgers, according to a study in the Journal of the American Medical Association.

Could we trick ourselves into thinking a smaller portion will give us status? Yet another experiment conducted by the Northwestern crew says yes.

They asked two groups of students to sample a selection of hors d'oeuvres laid out in two rooms. One group was told that the tiny treats were served at White House receptions, while the other group was told that the jumbo bites were. The groups tended to choose the appetizers touted as prestigious, with people who thought they had no power most likely to follow that trend.

In fact, real First Lady Michelle Obama is for smaller portions: Earlier this year she got Darden Restaurants to agree to reformulate and resize its portions.