Accessibility links
Giving Mini Burgers To Mice Reveals The Good And Bad Of Cooking Meat : The Salt Cooked meat delivers more energy than raw meat, which may have given our human ancestors a big evolutionary advantage. It may also explain why today's humans have a hard time keeping off the pounds, according to researchers at Harvard University. 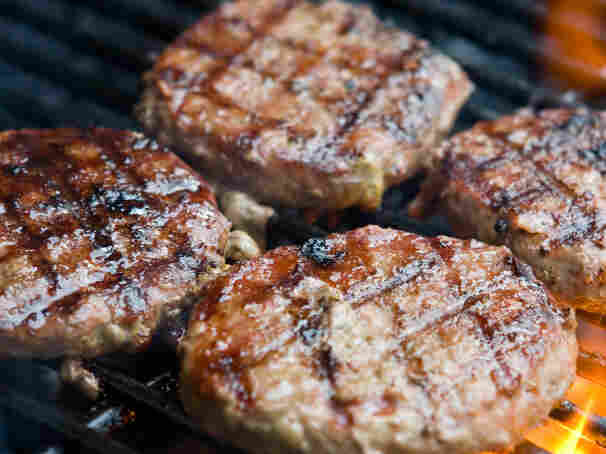 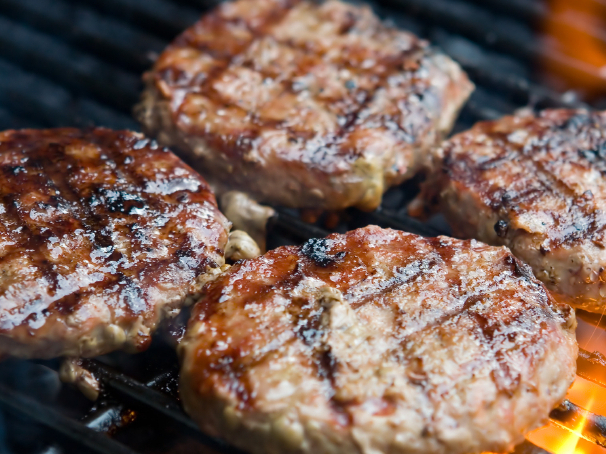 Cooked meat may be humans' most efficient energy source.

Ah, to be a Harvard laboratory mouse. The pay stinks, but the food is delish! Researchers at the venerable school have been serving lab mice tiny organic burgers made with meat from Savenor's Market, where Julia Child bought her steaks.

"It came out looking like a beautiful little mini hamburger," says Rachel Carmody, a graduate student in evolutionary biology at Harvard who cooked up the mini-burgers in Petri dishes.

This feast for furry critters was all in the name of science, of course. Carmody and her colleagues served up the mini burgers as part of an experiment to determine the differences in energy provided by cooked versus raw foods.

It turns out that cooked meat delivers more energy than the raw version — which may have given ancient humans an evolutionary advantage. But the extra energy from cooked food may now translate into unwanted pounds because nutrition labels don't reflect the fact that we process cooked food more efficiently.

The mice loved the mini-burgers. But they also appeared to enjoy eating raw cubed meat, and meat that was pounded to make it easier to digest. And they snarfed down raw, pounded and cooked sweet potatoes as well.

The mice lost weight when they ate only meat, because mammals aren't very good at metabolizing all-protein diets. But they got more energy out of the cooked meat. They maintained body weight while eating cooked sweet potatoes, but lost 10 to 15 percent of their body weight in just four days when chomping them raw.

"In both foods, cooking improved the energetic value of the diet," Carmody tells The Salt. She says hers is the first study to measure the net energy gain in cooking meat. The study appears online in this week's Proceedings of the National Academy of Sciences.

The cooked dishes may also have tasted better. At the beginning of the experiment, half the mice preferred raw foods, while half went for cooked. At the end, all 17 mice preferred cooked.

Though these experiments were done in mice, they support recent thinking on human evolution, too. Anthropologists increasingly believe that when human ancestors figured out how to cook meat, they earned a survival advantage.

Early humans ate raw food like tubers, roots, and berries. It took a big gut and a lot of energy to digest that food, and the brain lost out.

Eating meat, which is packed with fat and protein, helped fuel development of humans' large, complex brains, some anthropologists think. Cooking meat and vegetables made proteins and starches easier to digest, delivering even more energy. NPR's Chris Joyce tucked into a steak last year to report on how meat and cooking may have fueled human evolution.

It looks like that still holds true today, and not just for mice. Research in humans has found that people gain more weight when they're eating more meat, including chicken.

Carmody's study suggests that people who might want to watch their energy intake aren't getting much help from nutrition labels, which underestimate the calories in cooked food. Late last year, the federal government finally got around to requiring nutrition labeling on meat sold in grocery stores. But the labels won't be required until 2012. And the new labels won't take into account the increased energy availability in processed, cooked meats.

So modern-day omnivores can rejoice in the fact that a simple hamburger is a beautifully engineered energy delivery system. But they should also remember that those little Harvard mice grew plump dining on tiny gourmet burgers from Julia Childs's butcher. "The mice were eating meat from Savenor's," Carmody says, "while I was eating meat from the local bodega."