Accessibility links
How Soul Food Can Be Good For Your Health : The Salt Soul food has a rap as being too sweet and heavy. But in reality, the culinary traditions of the African diaspora offer just as many healthful eating options as those of Mediterraneans. That's the word from experts behind a new African Heritage Diet Pyramid, which puts eating guidelines into cultural context.

How Soul Food Can Be Good For Your Health

How Soul Food Can Be Good For Your Health 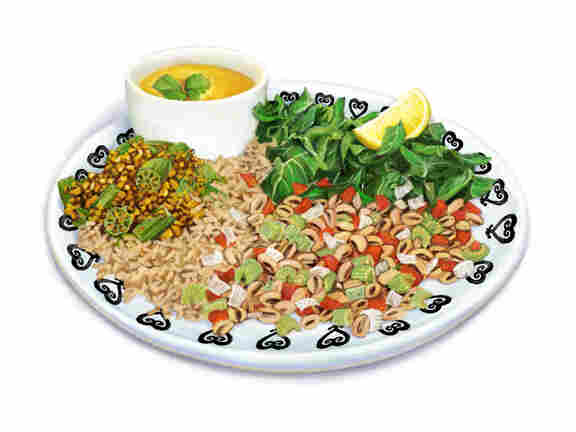 An illustration of a healthful meal drawing from the African Heritage Diet Pyramid and African culinary traditions. Illustration by George Middleton hide caption 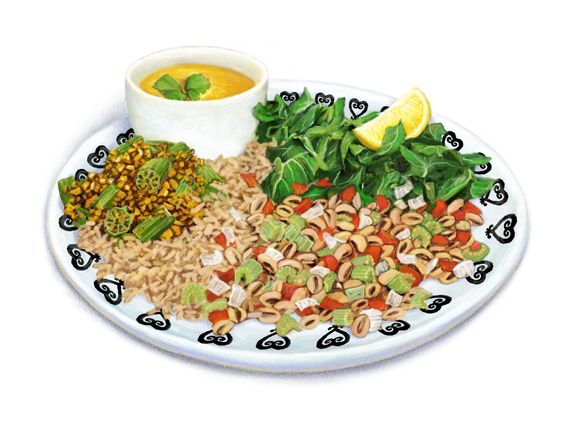 An illustration of a healthful meal drawing from the African Heritage Diet Pyramid and African culinary traditions.

Soul food has become the comfort food for a lot of Americans – not just the African-Americans whose ancestors invented it.

Now, food educators are looking closely at soul food's culinary roots for inspiration on how to eat healthfully today.

A group of culinary historians, nutritionists and health experts have put together the Oldways African Heritage Diet Pyramid, a new model for healthful eating designed specifically for African-Americans and descendants of Africans everywhere.

The pyramid draws from the culinary traditions of the American South, the Caribbean, South America and Africa, and shows familiar vegetables like okra and eggplant and fruits like papaya, as well as beans and meats. And unlike other food pyramids, it has a prominent layer devoted entirely to greens: collards, chard, kale and spinach — all foods of Africa and the diaspora regions of the Americas.

As high fat and sugar-loaded foods have come to dominate the modern diet, health and nutrition have deteriorated in communities around the world. But "African-Americans are disproportionately affected by several major chronic diseases, like hypertension, diabetes and obesity," Oldways President Sara Baer-Sinnott tells The Salt.

The new African heritage food pyramid is one of several diet pyramids that Oldways has designed to target specific cultural groups. The idea is that generally, people are more likely to adopt recommendations if they are put into the context of foods they actually eat. The heritage angle is also a way to encourage people to try new things their ancestors might have eaten, and avoid diseases their ancestors never had. 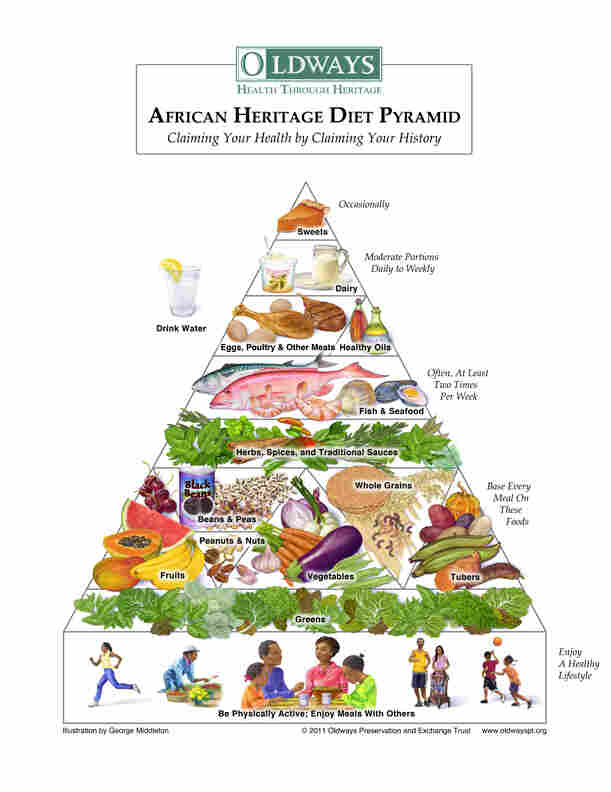 "Eating a traditional African Heritage Diet (or other traditional plant-based diet) and staying physically active will reduce, and in some cases eliminate, the risk of these chronic diseases," says Baer-Sinnott.

According to Jessica Harris, a culinary historian and cookbook author who helped design the pyramid, soul food "has been demonized as too sweet, too rich, too this, too that," when in reality, Africans and their descendants have just as many healthful food options to draw from as people from Asia or the Mediterranean region. Take, for example, Chicken Yassa and Hearty Pumpkin Soup, two tasty dishes included in the Oldways Plates of Expression — sample recipes that reflect the pyramid.

There are, of course, a lot of reasons why it can be hard to switch to a more healthful diet, but Baer-Sinnott says it's mainly just a matter of educating people about their food heritage. And so the group has plans to get the word out by talking to dieticians and doctors. Oldways is also working with the United Negro College Fund to jump-start African heritage cooking clubs and with faith-based groups to organize potluck suppers.

The U.S. government has its own set of guidelines for how Americans should eat. Back in June, the U.S. Department of Agriculture unveiled MyPlate, an overhaul of the oft-maligned MyPyramid. The colorful plate icon has been lauded as a simpler, clearer way of communicating how to balance the five food groups.

But Oldways designs its own dietary guidelines in part because Baer-Sinnott says "one size does not fit all."

Her African heritage pyramid, though, does accommodate some modern favorites, like sweet potato pie: It gets its own tiny spot at the peak.