Accessibility links
Why We Lie About Using Food Thermometers : The Salt Twenty percent of people say they often use a food thermometer — but they're probably lying. Used right, a thermometer is the best tool to make sure that food has been cooked long enough to be safe.

Why We Lie About Using Food Thermometers

Why We Lie About Using Food Thermometers 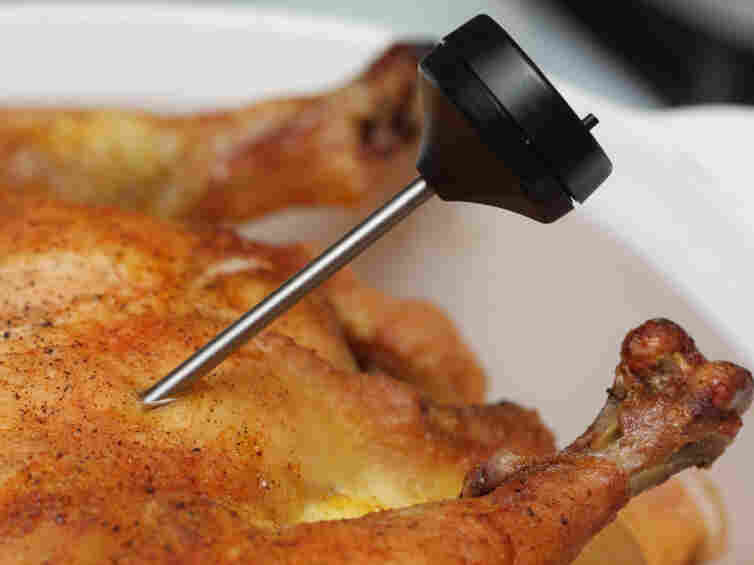 It's easy to misuse a meat thermometer. iStockphoto.com hide caption 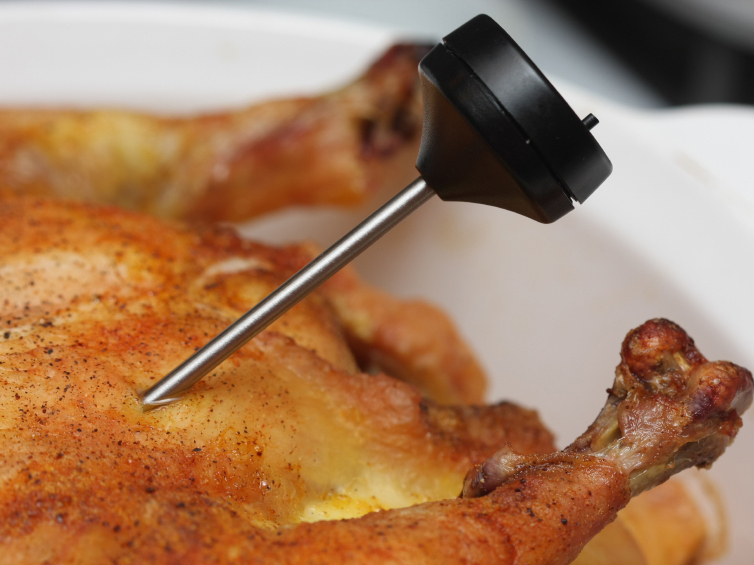 It's easy to misuse a meat thermometer.

Come Thanksgiving, cooks tend to go rummaging in the drawer to dig out the food thermometer; it may be the day we feel most compelled to deploy the slender little probe to keep the killer microbes at bay.

Or so we say. But we may be lying.

In fact, our mastery of turkey tech is pathetic. Just 20 percent of Americans say they regularly use a food thermometer to make sure they have cooked food safely, according to a new survey by the American Dietetic Association and ConAgra Foods. And food safety experts say that a fair number of those people were probably fibbing.

More than half of people admit to never using a food thermometer at all, not even at Thanksgiving, according to a survey by the International Food Information Council Foundation. And those who do, whether it's to test the turkey or an everyday burger, are probably using it wrong.

That's a pity, because a thermometer, used right, is the best indicator of whether food has been cooked enough to kill bad bugs like Salmonella, Campylobacter, E.Coli and Listeria.

So The Salt decided check in with the pros to find out where home cooks go wrong wielding food thermometers, and how we can get it right.

Ben Chapman, an assistant professor of food safety at North Carolina State University, studies food safety practices like hand-washing and thermometers. When we asked him whether people in general tend to fib about these things, he said, "Oh yeah."

And then he cited a study where he asked 41 people prepare raw frozen breaded chicken fingers in a laboratory. He found that they routinely lied about using the food thermometer provided. Just 10 percent actually used it, and only two used it right. Several cooks never took off the thermometer's protective sheath. His results were published in the British Food Journal.

"They were like, 'Oh, here's a thermometer,' and they jammed it in there," Chapman says. "It couldn't possibly have registered anything."

And that's the people who knew they were being videotaped. Researchers say thermometer use is something that people tend to lie about in surveys because we've all heard the public-health messages touting their use, like this new federal campaign, Food Safe Families. Non-thermometer users are probably following cookbook directions like "when the juice runs clear," which Chapman and other food-safety experts say is a myth. So is using color change to gauge whether meat is cooked.

But using a food thermometer right isn't a case of just sticking it in there.

"There's an art to taking the temperature of food," says Daniel Engeljohn, assistant administrator for the USDA office of policy and program development in charge of food safety rules. "There needs to be some comfort and confidence in using a food thermometer."

One key step: Take multiple readings. That's because the various parts of a whole bird like a turkey cook at different rates, and it can be hard to find the deepest or coldest point. Ground meats are also hard to measure with just one poke, because they vary in fat and water content. The goal is to cook each kind of meat until the coolest part reaches the temperature recommended by the USDA.

Microwaves tend to cook food unevenly, Englejohn says, even when a turntable is used. So that's another good reason to take multiple readings.

The other essential element of the turkey tech arsenal: A food thermometer that reads with pinpoint accuracy.

It turns out that the bimetal dial thermometer that this home cook has been using is not nearly accurate enough to safely measure temperatures. The coil within can too easily become uncalibrated. And because coil thermometers average the temperature along the probe, parts of the food being tested can still be undercooked even when it's registering a safe temperature.

Electronic thermometers that use thermistors or thermocouples are better at measuring temperature in a tiny space, important for checking the thin and small pieces of food like a fish filet that are most likely to be contaminated. (This 2006 paper by food safety expert Peter Snyder explains why thin and digital is best.) These are the tools of professional food safety inspectors, charged with making sure that restaurants keep the hot food hot and the cold food cold.

Cooks seeking a super-accurate thermometer need not shell out big bucks for a fancy device. Chapman raves about the Comark PDT 300, a digital thermometer with a super-thin tip. It's available online and in discount stores for less than $30. Now that he cooks for a 3-year-old, he finds himself using a food thermometer a lot more often. "Not to go all thermometer nerd on you, but I love it," he says.

When it comes time for turkey day, you can also always call a friend, or a friendly food safety expert at USDA's Meat and Poultry Hotline at 1-888-674-6854.