Accessibility links
Man On A Mission: Grow The World's Hottest Chili : The Salt An amateur chili grower aspires to break the Guinness World Record for the world's hottest pepper. 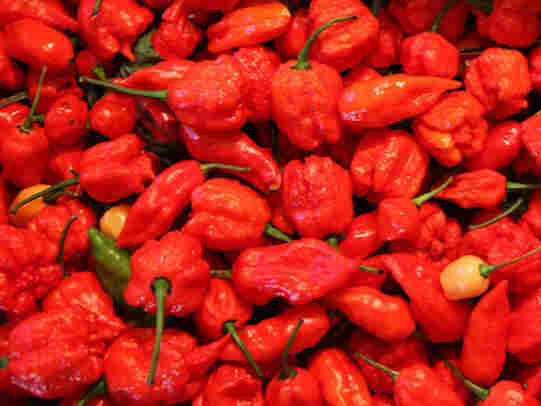 Ed Currie's chilis are not for the faint of heart, tongue or stomach. Tanner Latham/WFAE hide caption 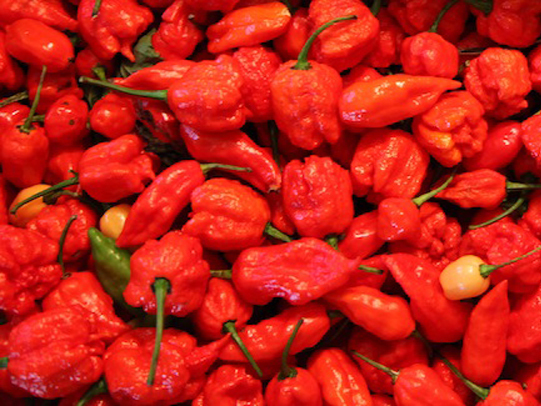 Ed Currie's chilis are not for the faint of heart, tongue or stomach.

Look out, heat fiends. A chili pepper so outrageously hot that it makes 2 in 3 people who eat it throw up is about to hit online stores.

"Your heart will race, you'll sweat. You might shake, you might throw up. But once it gets into your blood stream and gets into your brain the capsaicin releases the same endorphins that narcotics do. So you get a euphoric feeling."

That's how Ed Currie of Rock Hill, S.C., described the effects of the chili he grew to reporter Marshall Terry of NPR member station WFAE. Currie, an amateur chili expert who works at a bank by day, aspires to break the Guinness World Record for the world's hottest chili.

Currie's prized HP22B pepper is just the latest achievement in the increasingly competitive world of fire and spice — from hot sauces to raw chilis.

Eat it and weep.

Demonstrating his fearlessness as a reporter, Terry not only visited Currie's home to check out his 1,400 chile plants, he also tried the HP22B himself. The results are not so pretty, but you can see them in a video they made.

Currie's obsession in his pursuit of Guinness glory is capsaicin, the compound in peppers that creates a fiery effect on the mouth. The more capsaicin, the more heat, which is measured in Scoville units, and Currie's aim is to unseat the Trinidad Scorpion "Butch T" from Australia, which hits 1.4 million Scoville units. (There's also the infamous "ghost chili," which the Indian military has deployed in smoke grenades to combat terrorists.)

It seems Currie has a shot at breaking the record. His hottest pepper has come in at 1.5 million Scoville units on average, according to Cliff Calloway, a professor of chemistry at Winthrop University who has tested Currie's peppers.

Terry says Currie's passion for peppers was born more than two decades ago. But he got really serious after he learned that capsaicin had potential as a cancer-fighting drug. "My family dies from cancer a lot," Currie told Terry. "So I've been researching how not to die."

Medical researchers are still trying to figure out how capsaicin affects cancer cells. In the meantime, Currie will be anxiously awaiting the decision of Guinness officials — they're currently reviewing his submission. He'll also be trying to sell some of his death-defying chilis through the soon-to-launch Pucker Butt Pepper Company.