Accessibility links
Pizza As A Vegetable? It Depends On the Sauce : The Salt The U.S. House unveiled a spending bill that would unravel some of the Obama administration's efforts to revamp school lunches. Under the bill, pizza would still count as a vegetable. Nutrition advocates say if the rule stays, it will be a win for industry and a loss for kids.

Listen
Pizza As A Vegetable? It Depends On the Sauce 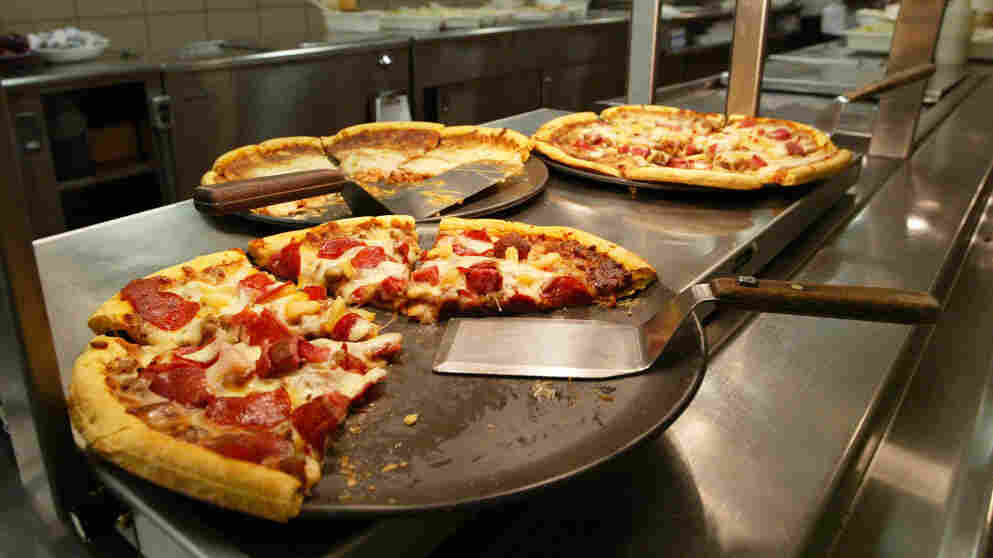 Pizza for sale at a Chicago public school. Under a House spending bill, this would still count as a vegetable serving — without extra sauce. Tim Boyle/Getty Images hide caption

When it comes to the politics of school lunch programs, the easy part is agreeing that kids should be eating more fruits and vegetables.

The hard part? Determining what counts as a vegetable. Take, for instance, the tomato sauce on pizza. As part of new nutrition standards proposed by the U.S. Department of Agriculture, schools would need to use about one-half cup of tomato paste on pizza in order for the sauce to count as a vegetable serving.

"A slice of pizza would literally be swimming in tomato paste," says Corey Henry of the American Frozen Food Institute. The group has lobbied Congress to change the provision. "No kid at school is going to eat a piece of pizza that's just drenched in tomato paste," he adds.

And lawmakers seem to agree. The House of Representatives' agriculture appropriations bill is out today, and it looks as if the bill will prevent the new rule on tomato paste from taking effect. It's a big score for the industry.

But advocates of stricter nutrition regulations say kids are the losers if the Pizza-As-A-Vegetable rule stays.

"It's a shame that Congress seems more interested in protecting industry than in protecting children's health," wrote Margo Wootan of the Center for Science in the Public Interest in a statement today.

"This [nutrition regulation proposed by Congress] may go down as the biggest nutritional blunder since Reagan tried to declare ketchup as a vegetable," Wootan tells The Salt. "It's ridiculous to call pizza a vegetable."

But she argues that pizza should be served with a vegetable. The nutrition standards, she argues, were intended to reinforce the 2010 Dietary Guidelines that say it's important for people to eat whole fruits and vegetables.

The AFFI's Corey Henry argues that even a little tomato paste on a slice of pizza packs in a lot of the nutrients kids need.

"Tomato paste is almost unique in its ability to provide a very significant amount of critical nutrients and vitamins," says Henry. And he argues that any comparison to the 1980s ketchup-as-a-vegetable controversy is just unfair.

"Not to disparage ketchup," says Henry, but "I'm not aware that ketchup has anywhere near the same ability to deliver vitamins."

It's not just the tomato sauce standard that lawmakers are rewriting. A provision meant to limit starchy vegetables, like french fries, also has had the potato lobbyists hard at work.

The House is expected to approve the measures when it votes on the agriculture appropriations bill later this week.