Accessibility links
Dirty Ovens: Built-In Seasoning Or Grimy Mess? : The Salt Preparing for a Thanksgiving feasts brings a host of extra domestic tasks. Here's one you might not think about until you go to cook your turkey: how important is it to clean the oven? 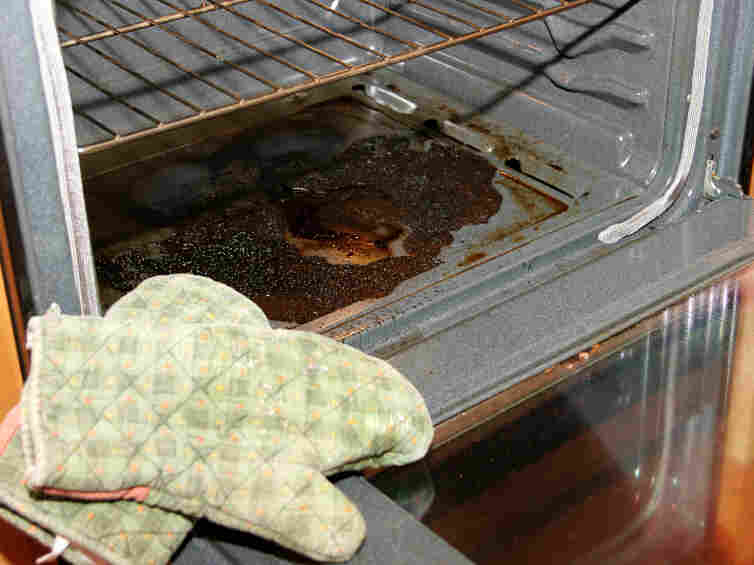 That puddle of grease is unlikely to be a source of tasty flavors for your next meal, experts say. iStockphoto.com hide caption 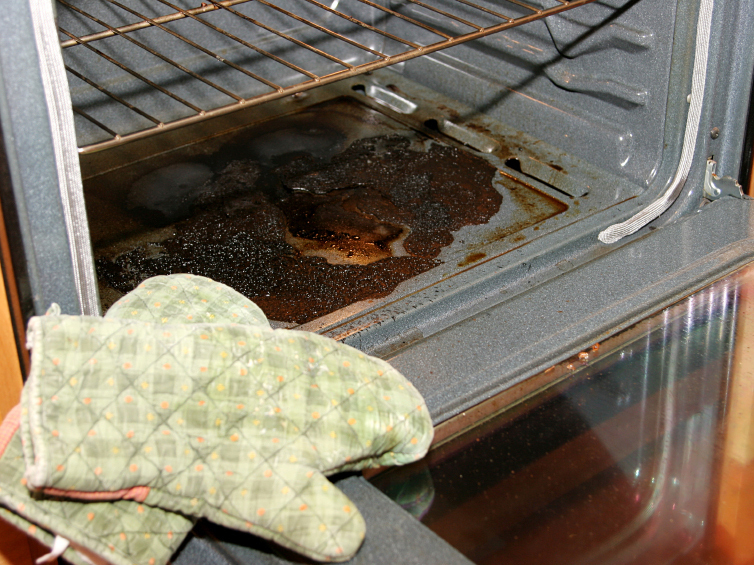 That puddle of grease is unlikely to be a source of tasty flavors for your next meal, experts say.

With some types of cookware, the more you use it, the better flavor it lends to food.

Instructions for cast iron skillets, clay dishes, or woks often include elaborate instructions on how to create a seasoning with oils or fats. To avoid damaging that protective seasoning, the typical advice is to "never use soap or an abrasive cleaner."

So that got some Yelp users wondering: might this apply to ovens, especially dirty ones awaiting a Thanksgiving turkey? Could those bits of char be the source of tasty smoke for the bird?

The Salt did a little homework on this, and determined: probably not.

First off, we're not talking about infusing the bird with a fine applewood undertone here. There's a difference between smoked cedar planks and smoked frozen pizza remains.

As cookbook author and culinary teacher Rick Rodgers tells The Salt, the metal inside an oven is much thinner than a pot or pan, which affects the way it reacts. "Food on oven walls just burns and the burned food will make smoke that will flavor your food and not in a good way," he says.

Karen Blakeslee, coordinator for Kansas State's food hotline, agrees. She says that food buildup can damage the inside of the appliance and reduce its heating efficiency.

Carol Miller, who has been answering calls at Butterball's Turkey Talk-Line for the past 27 years, admits that oven cleaning is not at the top of her Thankgiving prep list. "I personally wouldn't clean my oven unless it was really, really dirty," she says.

It's a common sentiment. Informal polling on the cooking blog circuit suggests that scrubbing the oven is a task most renters take on only when they want their cleaning deposit back, and homeowners probably even less frequently.

So that strange patina in the oven has to be attributed to laziness rather than quirky cooking strategy. But the good news is the self-cleaning cycle on most ovens is an easy way to burn off the grease. And a dirty oven probably isn't a a huge health hazard unless it's creating enough smoke to affect the air quality at your dinner party.

"Your oven should not be so dirty that it's smoking," says Rick Rodgers, a cookbook author who also teaches classes on American cuisine. But it also doesn't need to be squeaky clean. "Frankly, I would plan on cleaning the oven after Thanksgiving," he says.